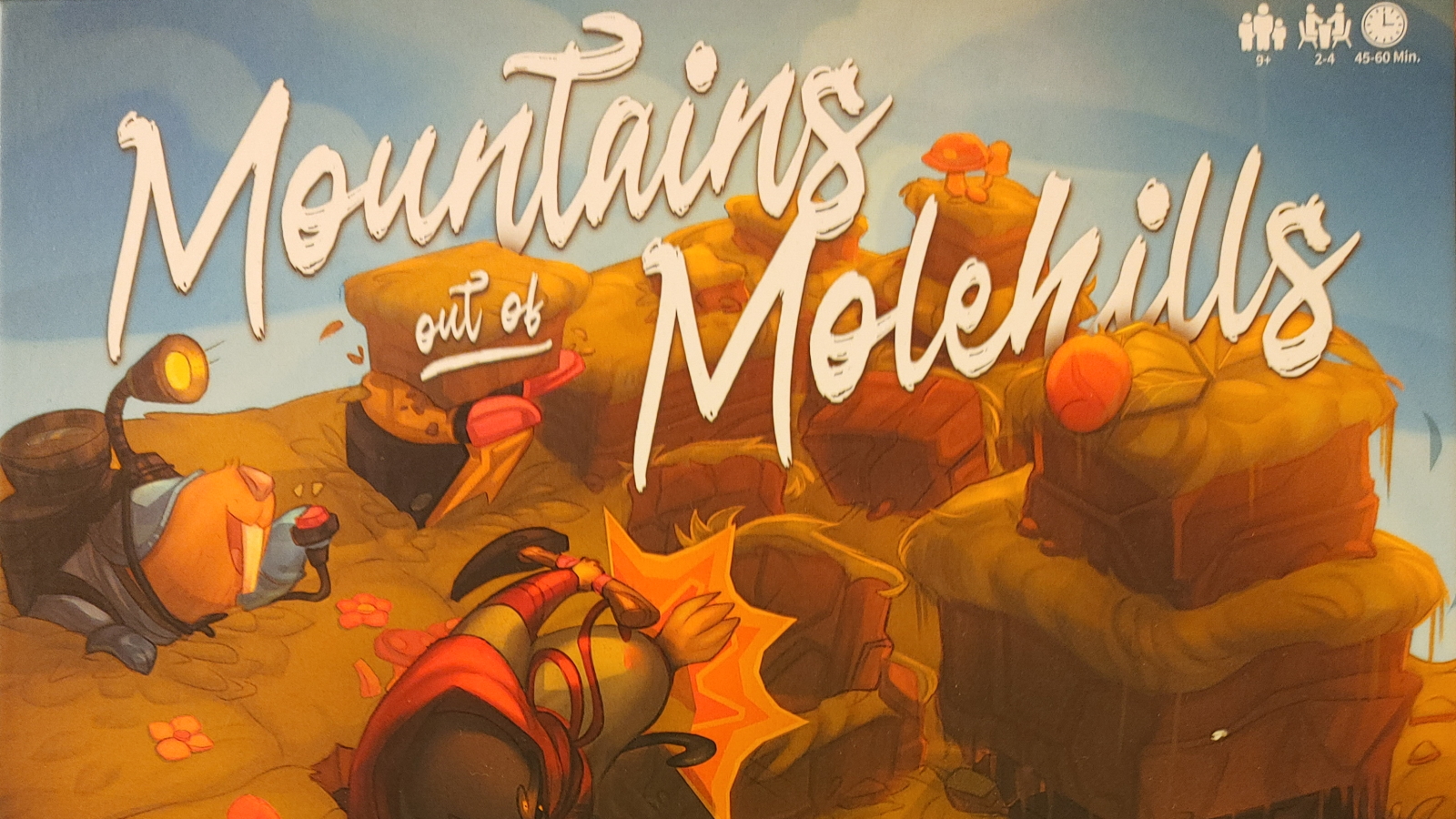 The best diggers that mole-kind has to offer are coming together to build the biggest mountains. They do this by moving underground in a field like Bugs Bunny; pushing earth up from beneath, and knocking those mountains over like dominoes.

In Mountains out of Molehills, you and up to 3 other players play as one of these four competitors, digging around below the earth in an attempt to make and control the largest mountains above ground. Players get their moles to move around by drafting 4 cards from a large pool of movement cards, and then putting them in the order they want them to execute, programming their moles 4 moves at a time. After finishing their plans, each player takes turns revealing cards and moving their mole around. Above ground, each time a mole moves, it puts one of its colored molehill pieces at the bottom of the stack above the square it entered, pushing it up from below. If the resulting mountain gets too tall, however, it falls over and the player that knocks it over has control over where the dirt falls. Most excitingly, these topples can push other mountains over the limit, resulting in big chain reactions that alter the board in one fell swoop. 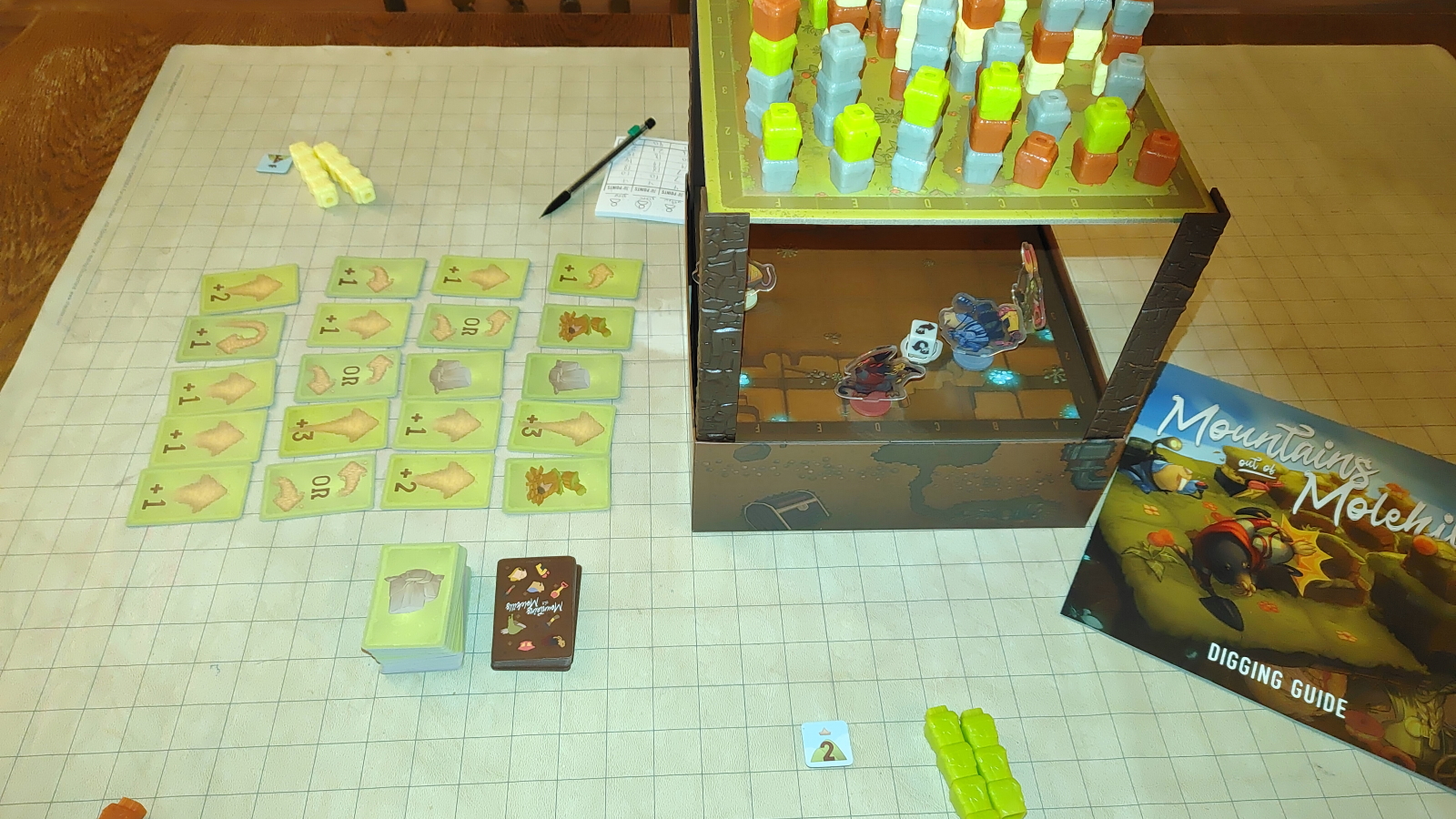 Scoring happens after all 4 moves have happened. Each player claims points based on the height of mountains with their color on the bottom, which means that just by moving through a tall stack of dirt, they claim all those points for themselves. This results in dramatic score shifts from one round to the next, which can help players in last place get caught up.

There are two non-movement cards available for drafting as well. The first is the topple card, which simply pushes over the tower just above your mole. The other is the rock card. This card is evil, absolute evil. It lets you move a rock from one space underground to another. It’s like moving the bandit in Catan, but even more devastating. When your poor mole runs into the rock, they get delirious and lose one of their movement points, then turn a random direction, determined by a die that’s rolled when the rock is originally moved. Then they continue, sometimes into another mole, or the edge of the board, both of which completely waste the movement of the player. Since movement is the basis of scoring points, this can be devastating, resulting in entirely wasted turns. This means that any turn a rock is available for draft becomes a cold war, each player wondering who will draft the first rock. Any family friendly game that can turn players against each other so quickly with such a simple mechanic is doing something right.

The moment to moment gameplay moves rapidly, minus a few pauses in drafting phases when players are trying to piece together some sort of plan. It’s also thrilling to move your mole, and see the trail of where it has been, and those juicy points you swooped in and stole by following someone else’s footsteps. It’s also great to see a chain reaction happen, where one tower gets knocked over, pushing another over, and another, resulting in huge stacks of points moving from one player to another. It also does not overstay its welcome, with my games rarely going over an hour, teach included. 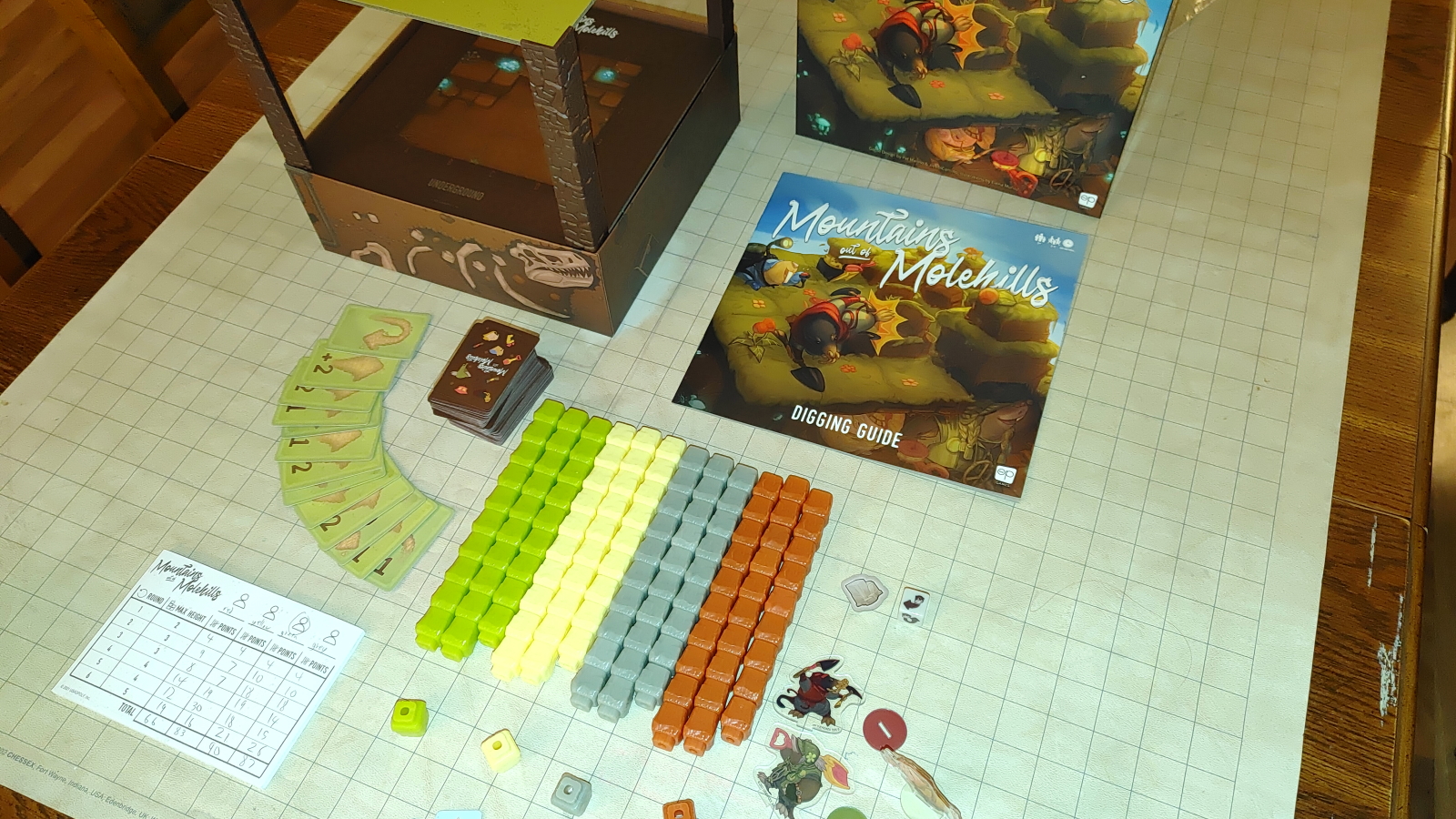 The pieces are also extremely good. At 40 USD, you typically don’t expect to see high quality custom pieces like the plastic Lego-style molehills, or the charming printed acrylic standees. Even the board design is smart and high quality, using the base of the box as a part of the lower board and to hold the supports for the above ground board. This whole arrangement winds up being surprisingly sturdy, even letting you push the molehills onto other pieces without accidentally dropping the whole thing.

It’s not without faults, however. The player that goes first has a large advantage, from taking the highest movement cards to going first, so they can have at least one round of unimpeded movement. This first player is chosen by whoever has the highest number of molehills on TOP of mountains. This, logically, might be the player scoring the lowest, but in actuality is the player who had the ability to cover the most ground in the first 2 rounds. What’s more, breaking the tie for this is the previous turn order, which means that those who go first, will likely stay going first nearly the entire game through. It is possible to cleverly knock mountains over to shift this dynamic, and it’s absolutely possible to turn being last in turn order into an advantage. 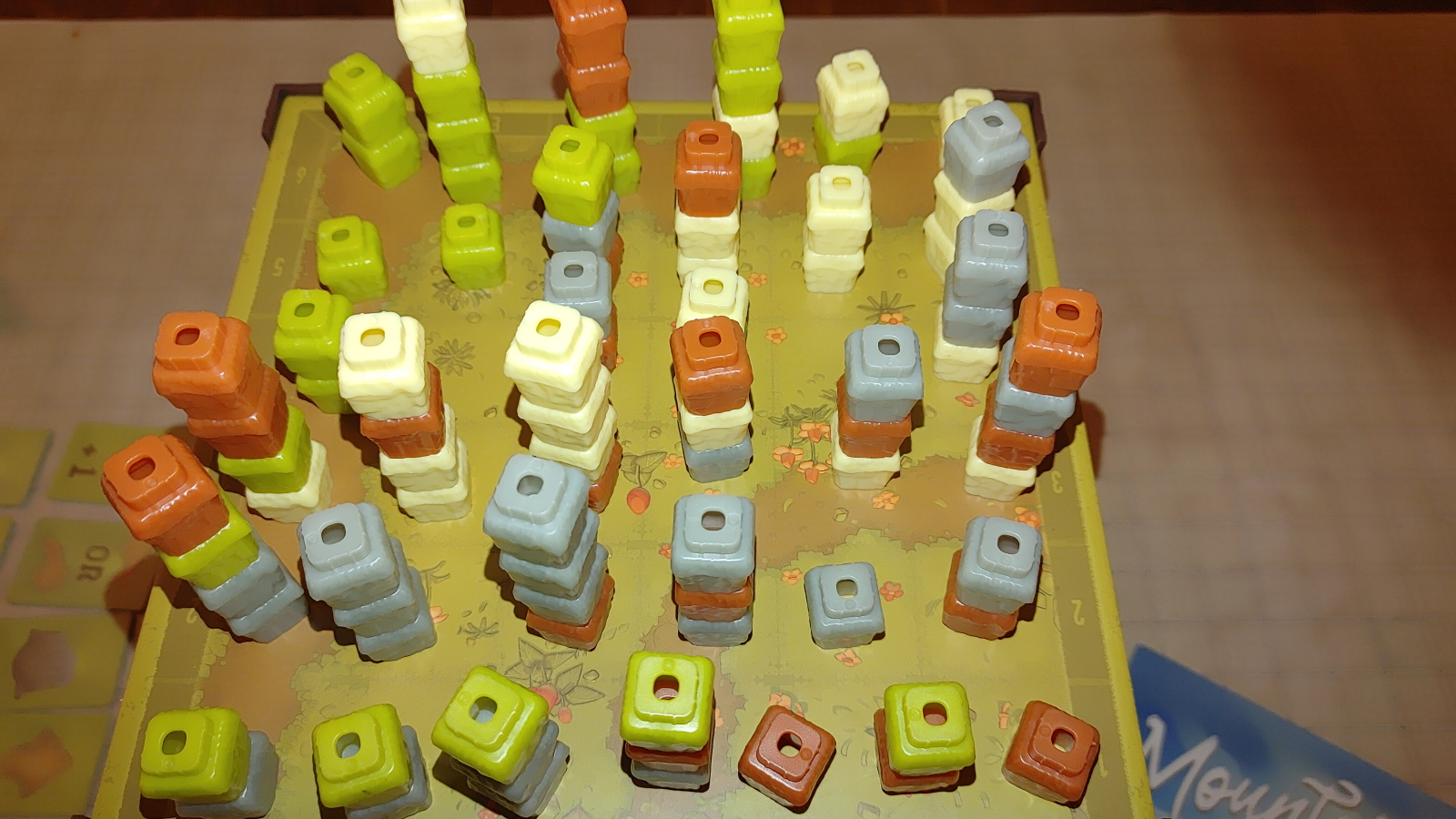 Your table may consider creating a few house rules on this one, such as reverse draft order from turn order, or at least using classic draft, where the last player gets 2 picks in a row. Outside of this niggle, I also wish there were some way to reclaim movement lost to miscalculation or unfortunate rock. It can be very disheartening to spend an entire turn moving full-bore into an unyielding wall. Also, a few components didn’t see as much love as the rest: The rock token itself is very plain, the movement cards are also somewhat flimsy, and the grid-lines on the boards are very difficult to distinguish, especially on the lower board. None of these things break the experience, but certainly could have been improved.

That being said, I love this game, and it’s gonna stick around in my collection for some time. It’s a great family friendly option, since players of any skill level can get enjoyment by playing the spanner in the works, while higher skill players have a perfect knowledge and bluffing game to puzzle through.

Mountains Out Of Molehills

Mountains out of Molehills lets you make big mountains and push them over, mess with your friends by getting in their way or throwing rocks at them, and forget what your plan was and spend an entire turn headbutting a wall. It’s all good fun.