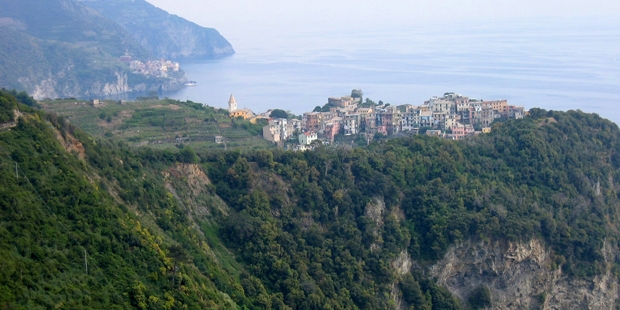 Along a sun-drenched swath of the Italian Riviera lay the Cinque Terre, five towns resisting the temptations of progress in favor of a brand of life resembling the local vintage wines so patiently aged. Given birth more than a thousand years ago by farmers driven from their family lands to steep cliffs rising inaccessibly from the sea, the villages of the Cinque Terre are only recently discovered by international tourists, but the logistical difficulties of navigating to, between and from these towns continue to intimidate the less-ambitious traveler. Those content with the expensive, congested charms of Rome, Florence or Venice are unlikely to overcome the area’s natural defenses. Nevertheless, the Cinque Terre have a thriving tourism industry, and people like to eat.

Few roads link the five towns to the surrounding countryside or to each other. The two primary conduits are the commuter train that links all five villages to Levanto in the northwest, and a seaside walking path rises from sea level at Riomaggiore through Manarola to Corniglia, hundreds of feet atop a cliff and descending steeply to Vernazza and Monterosso. Farmers cannot very well load up a cart full of zucchini, tomatoes and eggplant and put it on the train, which means they need to slowly drive the difficult path between towns in small motorized trucks.

Cinque Terre, the board game by Chris Handy, repackages the logistical complexities of moving produce from the farms in the hills through the towns below. Players take on the job of merchant distributors, buying produce and reselling in the five towns. The economy of the game is surprisingly nuanced, complete with a functional supply-demand model. The winner is the player who smartly buys and sells produce, fulfilling demand to earn the most money (Lire) by game end.

During setup the many, many dice are put into a bag (provided). The dice are color-coded, corresponding to the various types of produce available at the hillside farms. Squares beside each town indicate how many dice are drawn and rolled, resulting in the demand model for the game. For Riomaggiore you draw four dice and roll. Let’s say you pull red, gray, black and purple and accordingly roll 4, 2, 3, 6. Higher numbers mean greater demand and higher prices offered for those goods. In this example, merchants will get the best price possible for Grapes (purple) in Riomaggiore, but a below average price for Mushrooms (gray). The number of dice for each town does roughly correlate to each town’s population, with Corniglia in the middle being the smallest and most remote.

Another aspect of the economy is the Orders cards. Similar to Ticket To Ride where completed track cards award points at the end of the game, Orders define conditions which, when fulfilled, award the player extra Lire. These cards show various combinations of produce demand in two or three towns, and do not necessarily align with the dice rolled for each town. This means players may need to sell at less preferable prices in order to complete Orders. At the beginning of the game each player gets a Starting Order card. These require produce to be sold in every town but are worth 30 Lire if fulfilled. That could be as much as half your money at the end!

Farms have diverse but limited supplies of goods. Players can only buy a good at the farm where it is produced, hence the three farm locations. But you can’t just park the truck and buy whatever you want. There’s a large deck of produce cards to draw from and players can only buy goods for which they have a corresponding produce card. This is the most important dynamic in the game, representing the currently available supply. Italian farmers grow what they want, you see, and just because a fruit or vegetable is grown at a particular farm does not guarantee it will be ripe when you drive up. Lucky produce card draws are part of the game, but so is alacrity. Being decisive and moving quickly is usually better than endlessly drawing cards hoping for the best paying produce. This risk/reward is the core of what makes this game competitive and fun. Players are also limited to carrying no more than 4 goods at any time and whatever is purchased must be sold – no dumping veggies at the side of the road!

Cinque Terre is hard to get around. Players must move clockwise around the gameboard, no more than 4 spaces in a given turn. If you think that seems like a dumb restriction, go there for yourself and see how well it works to move against the flow of traffic. Chris Handy got this right.

You may be thinking, “The economy seems broken since both supply and demand are static.” Ok nerd, remember you’re driving a little fruit truck. People get pretty upset when they can’t get their linguine pomodoro at the local trattoria, so get back up that hill and bring down more tomatoes.

With a wagonload of Euro economic games on the market, where does Cinque Terre fit? While it borrows from traditional worker-placement and supply-demand games, Cinque Terre employs a unique combination of these elements. It is nuanced yet light enough to be fun for leisure and serious gamers alike.

The instruction manual is concise and easy to digest. Cinque Terre is an attractive product using plenty of bright colors, high-quality cardstock and more than 100 wood pieces. MSRP of $55 feels high but this game is available on Amazon in the $40 range which is a good value.

With a wagonload of Euro economic games on the market, where does Cinque Terre fit? While it borrows from traditional worker-placement and supply-demand games, Cinque Terre employs a unique combination of these elements. It is nuanced yet light enough to be fun for leisure and serious gamers alike.