Unrailed is a frantic, strategic party game wherein players are tasked with clearing a path and building a railroad track for a train that is constantly in motion. The difficulty of the game is affected mostly by the speed of the trains, a limited number of tools, harrowing geography, and these pesky little train robbers who take your materials away. As with all good party games, teamwork makes the dream work in Unrailed. It’s the type of game that may cause some shouting among friends but also delivers immense satisfaction with successful runs.

The game gives you a small collection of tools: a single pickaxe for removing stone obstacles and obtaining iron, a wood axe for removing trees and obtaining wood, and a water bucket for keeping your train cool, lest it burst into flames. Your objective is to carve a path and extend a railroad track through the environment quickly enough that the train, which is always slowly progressing on that track, makes it to its destination station without unrailing. Your train consists of an engine, a parts storage car, a rail manufacturing car, and a cooling tank. The parts storage car must contain one piece of iron and one piece of wood to produce the track, so the players are tasked with clearing a path, putting materials onto the train, laying rail in the proper places, and occasionally adding water to the coolant tank or using it to put out fires. As you play, you collect golden bolts which are a currency used to unlock new train cars. You can upgrade the basic parts of the standard train, or you can add cool features to your build, like a ghost car which you can walk through in tight spaces, or a car with huge blades sticking off the sides that mines materials as it passes them. 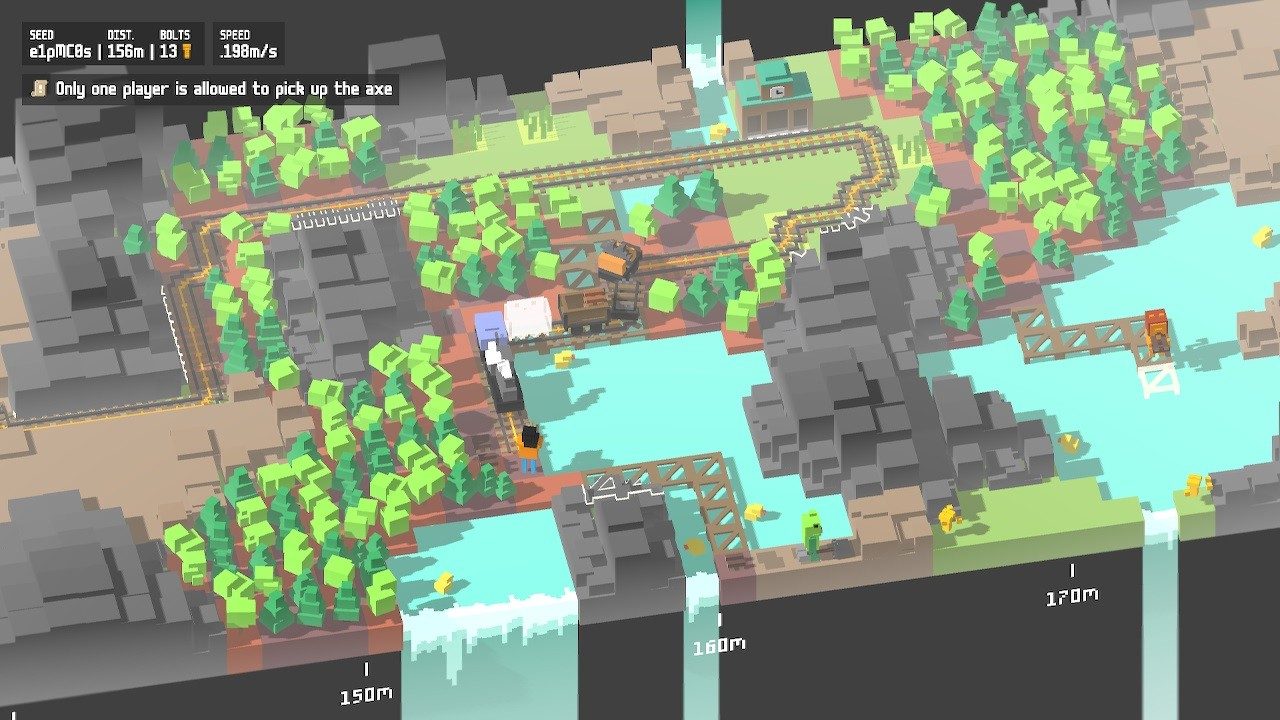 My friends and I had the most success assigning ourselves roles – a lumberjack, a miner, and builder/fire marshall. As the train moves through tight spaces, you have to be careful not to be blocked off by it and unable to access your tool or a part of the train you need to interact with. Often, each piece of track needs to be accompanied by a two-wide pathway because players cannot walk through each other and the game requires lots of running back and forth. Materials and finished pieces of the track can be stacked in huge piles on the ground and your tool has to be dropped to move materials so the game feels panicky at higher difficulties.

Unrailed manages to look simultaneously beautiful and minimalistic, like Minecraft or Firewatch. It gives you exactly enough of everything so it doesn’t look overly busy or boring. It uses an expansive color palette and everything looks bright, cartoonish, and wholesome. It uses a grid of squares that only contain one thing, meaning every block on the grid is only either, grass, tree, rock, water, etc., but each level is just elaborate enough to look distinct and have a different feel. The menus are great, too. Rather than lame words on the screen, they look like blueprints and you walk your character around on them to choose different options.

The sound is bare-bones, but that’s just perfect for the tone of the game. There are simple little sound effects, like a tree being chopped, and charming elevator-like music plays throughout. Its quality is surprisingly good – it’s catchy. It also changes based on the biome, which adds to their respective tones.

Unrailed is simple, charming, and absorbing. The gameplay is addicting, and it is exponentially more fun as you add friends to your game. It’s the best party game since, or possibly surpassing, Overcooked. A true hidden gem.

Tim, originally from where Fallout 76 takes place, is a writer, soccer player, cook, baker, and of course, gamer, just looking for his teammate-in-crime. When it comes to gaming, he enjoys long walks on the beaches of Normandy. He loves traveling, especially fast traveling because it saves lots of time. He's 6' 4" so he's saving up for an XL standing desk for his TV and Xbox. He's just as comfortable going out on adventures as he is staying in with a glass of Nuka-Cola. He's very easy-going, or peaceful-going, or whatever the easiest difficulty is called. If you want him to, he'll tell your parents you met him at the Winking Skeever.
Related Articles: unrailed
Share
Tweet
Share
Submit