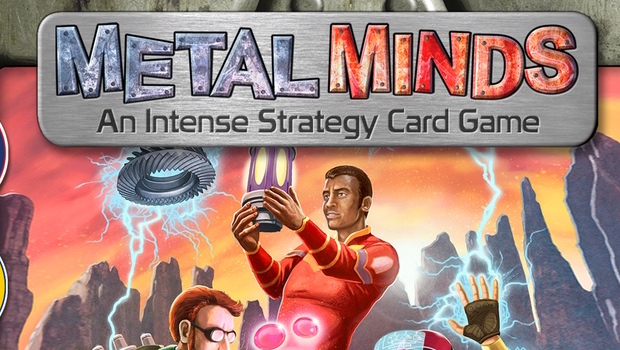 Card games have become a passion of mine in recent years. Time constraints of work and quality moments with family mean that epically long board games don’t hit the table as often, but card games can be played in a relatively short amount of time while still giving you a challenge. Card games still suffer from ire of lady luck as much as their dice cousins, but a great card game balances this by giving you a puzzle to solve. How can I best accomplish my goal with the resources in my hand? It makes you pause to consider your options, a mental exercise if you will. Nifty Games’ Metal Minds certainly is selling that point with its tagline of “An intense strategy card game.”

The game’s backstory involves a futuristic planet where DNA technology has advanced to the point of curing all diseases a la Matt Damon’s Elysium. The technology is expensive and without Bernie Sanders to lead the way to socialized medicine, most people must take up indentured servitude as a Mental Mind agent to cultivate rift orbs that are used to power cities. Rift orbs are the game’s victory condition, with the winner being the first player that collects eight of them.

Red orbs may win the game, but you’ll need to gather other resources to get them.

To begin, two to four players randomly choose one of the agents. Three types of agents can be pulled, each with their own set of special abilities. Silvermind agents draw additional cards. Ironmind agents collect the game’s resources which can directly or indirectly lead to orb collection. Finally, Coppermind agents collect orbs themselves. On paper, the Coppermind may seem the most powerful, but after a few play throughs I can promise you that drawing one does not guarantee victory. Overall, the balance of each of the eight possible agents being fairly even with the one exception being one of the Silvermind agents who seems weaker when compared to her counterpart.

Along with their special abilities, each agent has a set hand and device limit. Both hand and device limits run from two to four. A hand may be composed of up to three different types of cards. Blue maneuver cards allow immediate action. These allow you to collect resources, turn resources in for orbs, or even sabotage other players. Red engine device cards build a device into your line, which can hold devices up to the limit on the agent’s card. Though they take a turn before they can activate, engine devices are very powerful in that you can trigger their benefit once each subsequent turn. Green gadget cards work similarly to engine cards, but their effect can be triggered just once before the device must be scrapped. Each cards works itself well within the game, though again, one card seems to stand out. The green gadget card for gas grenade can force opponents to discard three cards. With hand limits up to four at best, it’s an awfully powerful card.

But that does bring up one part of the game I think is clever. In general, I think games with low hand limits are flawed, subject to the luck of the draw that stifles any element of strategy. Most games force you to reduce your hand down to the limit after drawing for the new turn. Mental Minds has you reduce your hand limit and then draw. It may not seem like a big deal, but it creates a different mindset. Action rounds can see hands fluctuate, forcing you to maximize each turn to get the most out of it. It also helps to not have the anguish of having to discard each time you draw. Yes, a bad draw can ruin a turn, but Metal Minds allows you to skip a turn to collect some resources instead or scrap devices in your line to make room for new ones. The game gives you a way to salvage something from a bad draw. Initially, I thought this would be a negative point, but skipping a round to build up resources could really pay off on your next turn.

Variable starting powers promise a new experience with each play.

The one area where hand limits do seem to bog the game down is in the opening turns. It takes the game a couple of turns to get any traction as devices need to be set or resources need to be collected to get anything done. Thankfully, the game runs smoothly so it doesn’t take long to get your action economy humming. Once the orb count starts rising, it seems the game takes on meteoric speed.

As you’ve read, the game has a lot of options in what’s a fairly small package. There’s some effective combos that can be set up using engine devices to generate resources and orbs. There’s certainly no one path to victory, but I will say a myopic approach will certainly lead to defeat. You can’t bury your head into your own hand and ignore what other players are doing, but you can’t do nothing but be a thorn in everyone else’s side either. Success lies in striking a balance between the two, which is where this game shines.

What doesn’t shine though is the game’s presentation. The two people I play tested the game with both remarked how the game had an 80’s feel to it. The graphics seem a bit dated, lacking the detail that you’ve come to take for granted in this golden age of gaming. The resource/orb tracking boards are a bit on the thin side. Even the plastic pieces that represent resources could have come straight from a game of Sorry, but at least the orbs are made of glass which helps emphasize their importance. Still, the game has a bit of a cheap feel to it.

That doesn’t result in being a deal breaker by any stretch, though. There’s plenty of strategies to try out, and overall the game is well balanced. The deck and multiple agent options will keep this game fresh for many plays. The game’s objective fits perfectly within the theme.  Maybe it’s not as visually stunning as card games like Lord of the Rings LCG or the Legendary series, but those games can drain your wallet in a hurry. Metal Minds’ lowest pledge level to get the game is just $20. With games reaching triple digit price points, Metal Minds is a refreshingly inexpensive, enjoyable experience.

Interesting card game set in a futuristic world. Cards have both immediate and delayed powers which can lead to some rewarding combos. It may not be the best looking game you've ever played, but Metal Minds packs a pretty decent, budget friendly punch.