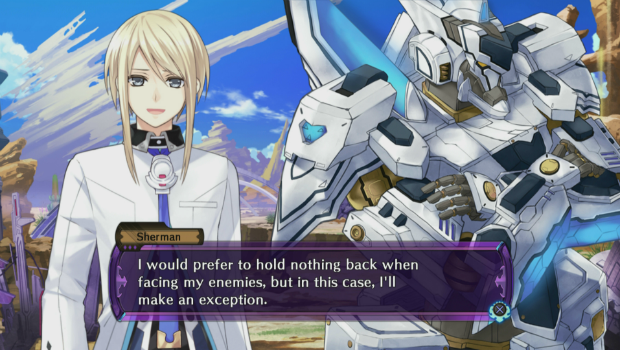 Imagine yourself trapped in the cackling corridors of a frazzled mind, filled with hunger, lust, anger, and confusion.  Imagine that mind is in both a prepubescent boy and girl.  Imagine that in this world you are also followed by the screaming guitars of a power metal ballad, interspersed with a lazy rhythm that signifies situational ignorance.  If you imagine that and think “Hey, I want to spend 80 hours there doing math,” than Fairy Fencer F: Dark Advent Force is the game for you.

If that sounds horrible, then you need to avoid Fairy Fencer F like the plague.  Expanded in a few positive ways from its PlayStation 3 counterpart, the new Fairy Fencer F is an improved game that has a few strong qualities, but is lost amongst a terrible set of characters, settings, story telling elements, and generally bland and predictable gameplay mechanics.

Fairy Fencer F tells a tale of great conflict between the Goddess, a pure being, and the Vile God, who is true to his title.  These two great cosmic warriors are sealed in another dimension via “Furies”, a series of bladed weapons with fairy residents inside, stuck throughout their bodies.  A young lay-about moron du jour named Fang pulls a fury from the earth containing Eryn, a bossy yet submissive fairy and a quite literal Manic Pixie Dream Girl.  Together they live, learn, and pull swords out of a couple of gods’ crotches until something good (or bad) occurs.

The story and background information for Fairy Fencer F are both decent enough, but the characters are absolute tropes that refuse to die.  The first companions you come upon as the game progresses only further mires the game in cliché.  No matter how interesting the game tries to come off, the dullness of the characters ruins any good that may be earned there.

If you play JRPGs, particularly those being made by Compile Heart, then you might be thrilled to find that Fairy Fencer F is just as dependent on hallway style dungeons, lazy graphic novel style storytelling, and “in-town experiences” that aren’t much more than glorified menus.  My hope is that you are as horrified as I was to find that given the years and time to improve, Fairy Fencer F plays mostly like its PlayStation 3 counterpart.

This highlights a problem not just with Fairy Fencer F, but with JRPGs in general.  This game originally came to be in 2013 and this release is a slightly improved upon low end experience as it was before.  That said, original and brand new games in this vein are very similar in style and substance, with all the same lazy mechanics and poor quality writing combining into a bland mush.

The battles are passable but unremarkable, with a turn based system intermixed with action mechanics, such as a battle arena and the ability to move your characters.  You have standard attacks, special attacks, and can use items. There is also a transformation mode, which is a popular mechanic in Compile Heart titles.   There aren’t any real problems here, but there isn’t anything special either.  Completely workmanlike, the battle system is the hammer and nails of this mess that keeps it all together.

Exploration is done through a series of overmap locations that you have to unearth using collected furies.  Each fury has a special ability buff or debuff, and by slamming the weapon into the “earth” on the map, you can unlock dungeon locations and also apply the characteristics of the weapon to the dungeon overall.  When not used as divining rods, the furies can also be used as buffs for the characters, by linking them to your partner fairy.

This is my favorite part of the game as it gives you a way to vary the dungeons you explore based on your needs.  Need experience?  Boost it with a fury.  Need to weaken the enemies?  Bring them down with a fury.  The fact that these are both usable to affect characters or dungeons adds an interesting layer of strategy that is fairly unique.

All in all, we have a game that plays okay, but with a pretty standard experience that is bogged down once again by story and character tropes and flaws.  Again and again this is the case, and Fairy Fencer F has the excuse of being a remake, but that doesn’t do much for those paying full price for a cookie-cutter, pulp- like experience.

The game is a lighthearted anime tale and the design is reminiscent of that.  Cartoony, low resolution, and predictable, the areas you’ll explore are, again, decent but lackluster.  Fairy Fencer F does also have the distinction of having absolutely terrible music, which is usually a strength with Compile Heart titles.  The music is sub-passable sonic filler for the most part, but two particular tracks stand out as particularly wretched noises, and you’ll be hearing both songs on a near loop for about 50% of the game.

Fairy Fencer F: Advent Dark Force is a remake with very few improvements. An added ability to be evil and access a new storyline brings new content, but the game is basically unchanged from its PlayStation 3 debut. Bland, cliché, and uninspired, Fairy Fencer F is just another cog in an increasingly frustrating machine churning out the same JRPG experience over and over again. With recent releases of bigger and better games in the genre, Fairy Fencer F is one to avoid.

Patrick Rost has been with Gaming Trend since 2013. At first focused on sports coverage, Patrick has gone on to cover a wide range of games and other products for the website. Outside of Gaming Trend, Patrick writes and records music, grinds perpetually in Elder Scrolls Online (PS4), and lives day to day with his two dogs, Bob and Stella.
Related Articles: Fairy Fencer F: Advent Dark Force
Share
Tweet
Share
Submit