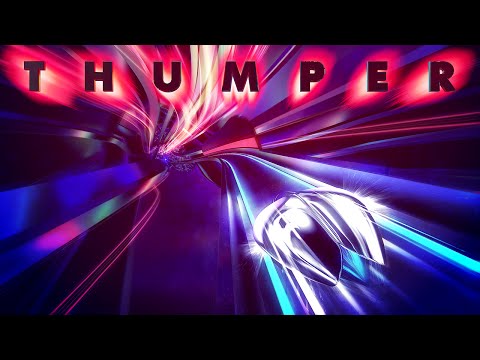 I’ve reviewed a ton of music titles, but I’d never run across the term “rhythm violence” for a genre. It’s a term that developer Drool self-stylized, and it might be somewhat hyperbolic if it wasn’t so true.

Thumper doesn’t have a story per-se, though what unfolds certainly has something to say. I’m not sure exactly what that something is, but it’s something. The game kicks off simply enough as you pilot a chrome beetle down a winding track. As your shiny avatar crosses little marks on the track, you’ll press X to thump them with the beat. Moving further into the level you’ll encounter what resembles speedbumps. Holding X lets you blast through them. Spikes begin to come your way, forcing you to leap them, lest your beetle be cut to ribbons. When your beetle encounters a corner you have to press X and the opposite direction, essentially clanking your butt against the steel guide rails.

From the mechanics alone, Thumper isn’t reinventing the wheel. This simple single-button control scheme is combined with an excellent soundtrack that provides the timing which brings it all together. Bouncing off the steel rails has a satisfying clank, skipping over the speedbumps rata-tata-tats, and hitting the thumper spots issues a sort of whoosh. If you miss one of the catchy audio clues and slam into an oncoming corner, run into spikes, or run into other obstacles, your beetle’s hard protective shell is shattered, leaving you vulnerable. A second strike ends your run immediately. Thankfully, Thumper is fairly generous with checkpoints that regenerate your armor.

Where Thumper is not generous is in the difficulty department. Each of the eight levels are split into roughly 20 subsections. Each level will take you roughly 40 minutes to complete if you did it all perfectly.

Thumper starts out easy enough with a first level tutorial that gives you a quick crash course (pun intended) on the controls. It introduces to you sub-bosses that you’ll take out by successfully performing the same sequence a few times. As I mentioned, any screwups costs you your armor, and the second hit costs you your life, which is especially painful at times. You’ll respawn at the beginning of that section, which can be quite a ways back from where you lost your life. In the case of some boss battles, it may be a very long way away. Frustration will only make it worse, with knuckling down and concentrating being the only true cure for any lapse in timing.

As you push further into the game, bosses get more hearty, placing protective shield rings between you and them. Once you’ve locked in the pattern recognition, you’ll have to repeat it several times to take out the armor, and then you can down the boss behind it. Everything is ranked using the racing standard nomenclature of C, B, A, and S. All of it is pushed to the leaderboards, of course, so you can marvel at the people at the top and wonder how your score is lower by an order of magnitude.

The only real frustration I had with Thumper’s gameplay is that when your beetle inevitably careens into a wall, it can be difficult to see what’s ahead of you. The silver reflective debris scatters, potentially obscuring the next sequence in a hyper-difficult pattern.

Thumper is, for all of its brutality, well paced. It introduces new elements such as spikes, sharp double turns, rings to grab, and eventually more that I won’t spoil, over time. As there are no difficulty levels beyond the freshly-added Thumper+ mode (more on that in a bit) it’s critical to ensure that anyone can play the game. I’m not saying it’ll be easy, but it’s highly accessible.

Graphically, Thumper is very basic, although highly stylized. The ever-present track glides along into the distance as the level comes to life in a biomechanical way. It’s hard to describe, and it’s even harder to explain just how insane it all looks inside of the PSVR headset, but like other music-based titles, you’ll be very focused on what’s upcoming on the track. The creatures (it’s hard to know what to call the things you encounter in Thumper) undulate their mechanical tendrils and pulse with an unnatural motion. Suffice it to say that it’s all very odd and I kinda dig it — you can check out a slice for yourself below.

The only real knock I have against the surreal style of Thumper is that there is little to differentiate individual levels, other than the number of presented challenges and the bosses it contains. The red color pallet is persistent throughout, with some variations of color thrown in to liven it up, but otherwise it’s fairly consistent. It’d be nice to break some of that up, though it’s a very minor nitpick.

You can play Thumper outside of VR, but some of the magic is certainly lost. The little silver beetle is alive with details and sharp focus. The levels wave around and twist like some sort of drug-fueled nightmare. Each time the boss (his name is Crakhed, by the way) appears, his visage distorts more and more, looming large in the VR headset. Much of that loses impact when it’s done on a regular television. There’s still a difficult and rewarding game underneath, but it’s less impactful.

Crakhed is the ever-present boss.

Once you’ve completed three levels of the regular game, Thumper+ unlocks, and for the sadists among you, it could be a nice addition. If the game wasn’t difficult enough, this new mode brings permadeath, moves faster, and seems to add new elements (it’s hard to say at this speed) to contend with. The game also runs at 60fps and at 4K resolution, if you’ve got the PS Pro and a 4K TV to take advantage of those things.

You may have noticed that I’ve talked a lot about Thumper’s breakneck speed and crazy visuals, but I’ve not mentioned nausea once. I’m happy to say that Thumper is a nausea-free experience. The track twists and turns, the world undulates and pulses, and somehow none of this madness made my wife or I feel sick. It’s a triumph in and of itself.

Thumper is a right hook out of nowhere. It’s the right combination of speed, bizarre visuals, music, and difficulty that makes you want to replay it after the credits roll. The single button and stick controls also makes it eminently accessible to everyone, but difficult to master. Come for the bizarre visuals, stay for the even more bizarre bosses.

Ron Burke is the Editor in Chief for Gaming Trend. Currently living in Fort Worth, Texas, Ron is an old-school gamer who enjoys CRPGs, action/adventure, platformers, music games, and has recently gotten into tabletop gaming. Ron is also a fourth degree black belt, with a Master's rank in Matsumura Seito Shōrin-ryū, Moo Duk Kwan Tang Soo Do, Universal Tang Soo Do Alliance, and International Tang Soo Do Federation. He also holds ranks in several other styles in his search to be a well-rounded fighter. Ron has been married to Gaming Trend Editor, Laura Burke, for 21 years. They have three dogs - Pazuzu (Irish Terrier), Atë, and Calliope (both Australian Kelpie/Pit Bull mixes).
Related Articles: Thumper
Share
Tweet
Share
Submit