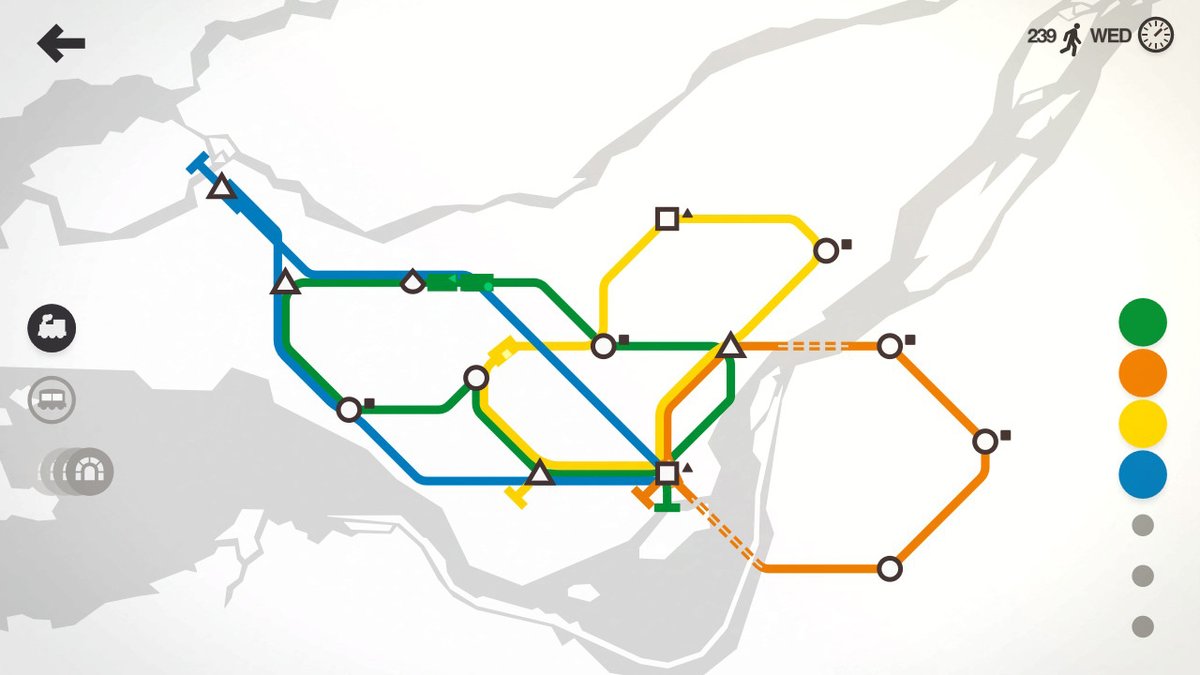 The puzzle genre is not one I’m too engaged with outside of classics like Tetris and Doctor Mario. There are a few more in my repertoire, such as the puzzle-platformer hybrid Henry Hatsworth, but by and large I’ve paid little attention to the genre. However, Mini Metro is a game that I found alluring from the moment I laid eyes on it and its blend of styled minimalism and real-time puzzle gameplay. Now that I’ve played the game, I can safely say that Mini Metro is a very solid addition to the Switch’s scant lineup of puzzle games, but isn’t without its issues that hold this title back from greatness.

The crux of Mini Metro’s gameplay is rather simple: as the theoretical metro designer for real-world cities, you’re tasked with building a series of interconnected train lines to move people from station to station as their heart’s desire. The gameplay, on a purely mechanical level, isn’t too complicated. To facilitate transportation, all you have to do is connect stations with colored train lines, on which trains run automatically around the clock, seven days a week. At the end of a week, you’ll receive more trains, bridges, lines, and other parts to make your metro system more efficient. This is incredibly important, as the real strategy and nuance of Mini Metro derives from this need to manage resources. While you’ll get more trains of your own, the city around you is constantly expanding too, with new stations and passengers to shuttle about cropping up at a fairly fast pace.

Success in Mini Metro hinges entirely on your ability to manage the influx of new stations with a limited suite of tools. After all, should too many people get caught up waiting at a particular train station for too long, your metro will be shut down due to overcrowding, and you’ll have to start again from square one. These folks are busy, and your system needs to match their fast-paced lifestyle. This necessity for quick thinking opens up myriad possibilities, as you’ll be constantly redrawing lines and assigning trains to optimize your routes. I was incredibly engaged by this nuance, as discovering the best ways to shepherd passengers efficiently forced me to think dynamically about the best layout. In some instances, making smaller loops was the best call, yet in others, creating sprawling tracks that run trains back and forth across the city proved more effective. Sometimes, even within the same scenario, my plan had to be altered entirely due to a station popping up where I least expected it, forcing me to redraw routes, kicking my mind into overdrive to account for these sudden changes.

Unfortunately, modifying existing paths isn’t always easy to do, and this isn’t due to any sort of mechanical limitation. Instead, the fault lies totally with the controls. For the most part, they work fairly well, especially when utilizing the Switch’s touch screen. However, drawing lines exactly how you want them, and particularly, erasing lines, can be rather finicky, and there were many points during my time with Mini Metro where I found myself losing time trying to fight the controls, and some simple quality of life improvements in this department would’ve gone a long way. To that point, Mini Metro’s quality of life would’ve been much improved with a more robust tutorial as well. The game simply doesn’t teach you enough from the jump, and I had to actually research the game online a bit to really get a grasp on the gameplay, which is unfortunate.

However, once you do grasp the intricacies of Mini Metro, the game becomes incredibly compelling. Yet, while Mini Metro always keeps your mind racing and forces you to think quickly, it never becomes particularly difficult to progress, which lends Mini Metro to feeling rather scalable. To unlock the next city, you need a certain number of points in the preceding level, but the bar isn’t set that high. So playing the game casually is totally viable. Simply enjoying the tactile gameplay of connecting train stations and moving passengers about is laid-back fun. But the real challenge of Mini Metro is found in maintaining a metro for a long period of time as you chase a new high score. The latter is my preferred way to enjoy the game, and this strategy is what I truly latched onto. However, the way in which the experience can be tailored to any playstyle is very nice. Those who want a laid-back yet engaging puzzler can find that in Mini Metro, but those looking to rack up some serious points will find a much more demanding experience.

In addition to its engaging gameplay, Mini Metro boasts a clean, minimalist aesthetic. This was a deliberate choice, as the game’s bold colors kept the gameplay easy to interpret, even with myriad lines, passengers, and trains moving back and forth. This was incredibly appreciated, as late-game Mini Metro can get rather hectic. I love minimalistic design in general, so the title’s use of the style is really appealing to me even divorced from its gameplay merit, however, I do feel that it borders on too minimalistic at times. While the cities you’ll be running trains in are all distinct in name and river placement, nothing about the game’s presentation truly alerts you to where you are. A few more flourishes here and there would really augment Mini Metro’s design, which can become rather repetitive in longer play sessions. The music borders on a bit too minimalistic also. Actually, there were several points during the game in which I cranked the volume and held my Switch to my ear to verify that I was even receiving sound, which isn’t a glowing endorsement of Mini Metro’s soundtrack. When the music does kick in, though, it has a very relaxed vibe, and the title has overarchingly solid SFX throughout.

With a few more quality of life changes and a bit more attention paid to Mini Metro’s presentation, this game could really be a tour de force, or should I say, tour de Paris, Washington D.C., Auckland, and more. What is here, though, is a very scalable puzzle game that demands exactly what you want to give. Once you get a grasp on the mechanics, Mini Metro can be either a laid-back puzzler or a demanding resource management title, and you’ll have fun with both modes of play. I’ve truly enjoyed my time with the game, and it has been my go-to title before bed. It really is a perfect fit on the Switch due to its hybrid nature, and with exclusive multiplayer, this is the best way to experience Mini Metro.

Mini Metro’s dynamic gameplay kept me engaged, yet never left me feeling overwhelmed. Whether I was simply looking for twenty minutes of casual puzzling or a burst of hardcore strategy, Mini Metro’s deceptively nuanced gameplay worked on both levels equally well. With some quality of life improvements and a more detailed presentation, Mini Metro could propel itself even higher, but even with these concessions the game is easy to recommend.

Abram is an aspiring games journalist with a soft-spot for titles published by a particular company that starts with N, and ends with -intendo. When he's not playing, or writing about, video games, Abram is most likely ranting to no one in particular about various films he's seen, or grabbing the sketchpad to do a bit of drawing.
Related Articles: Mini Metro
Share
Tweet
Share
Submit