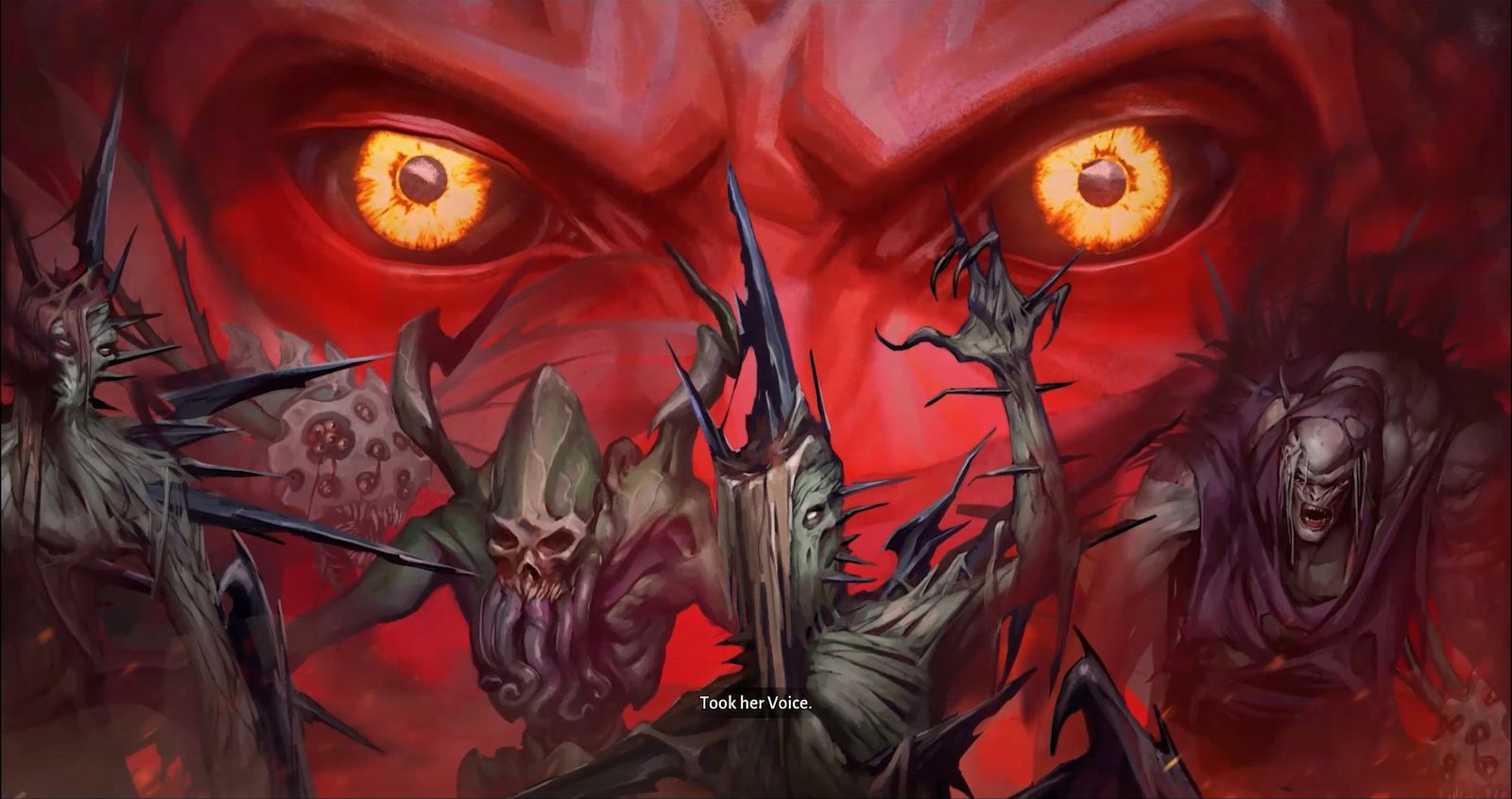 When id Software created Doom, do you think it would have spurred nearly 30 years of clones? I don’t think you could ever account for that possibility. For many, many years these clones were a dime a dozen; the quality lacked and the gameplay was so boring that there really wasn’t any substance to them. We’ve seen recent takes on the genre with games like Hellbound, which might as well have been called Swampbound with the amount of bugs you’d come to deal with. That was a prime example of the boomer-shooter experience and one that still ended up being a ton of fun – even with all its problems. So, now we get to Metal: Hellsinger, the most recent take on the boomer-shooter genre. Unlike other games in this field, this one is rather special.

Now, when I say boomer-shooter or Doom clone, what’s the first thing that comes to mind? You’ll probably say “huge arsenal”, maybe “metal music”, or even “stupidly fast FPS shooter”. Of course, Metal: Hellsinger does almost all of these to a T (a critique we’ll get to later), and then it takes things one step further. 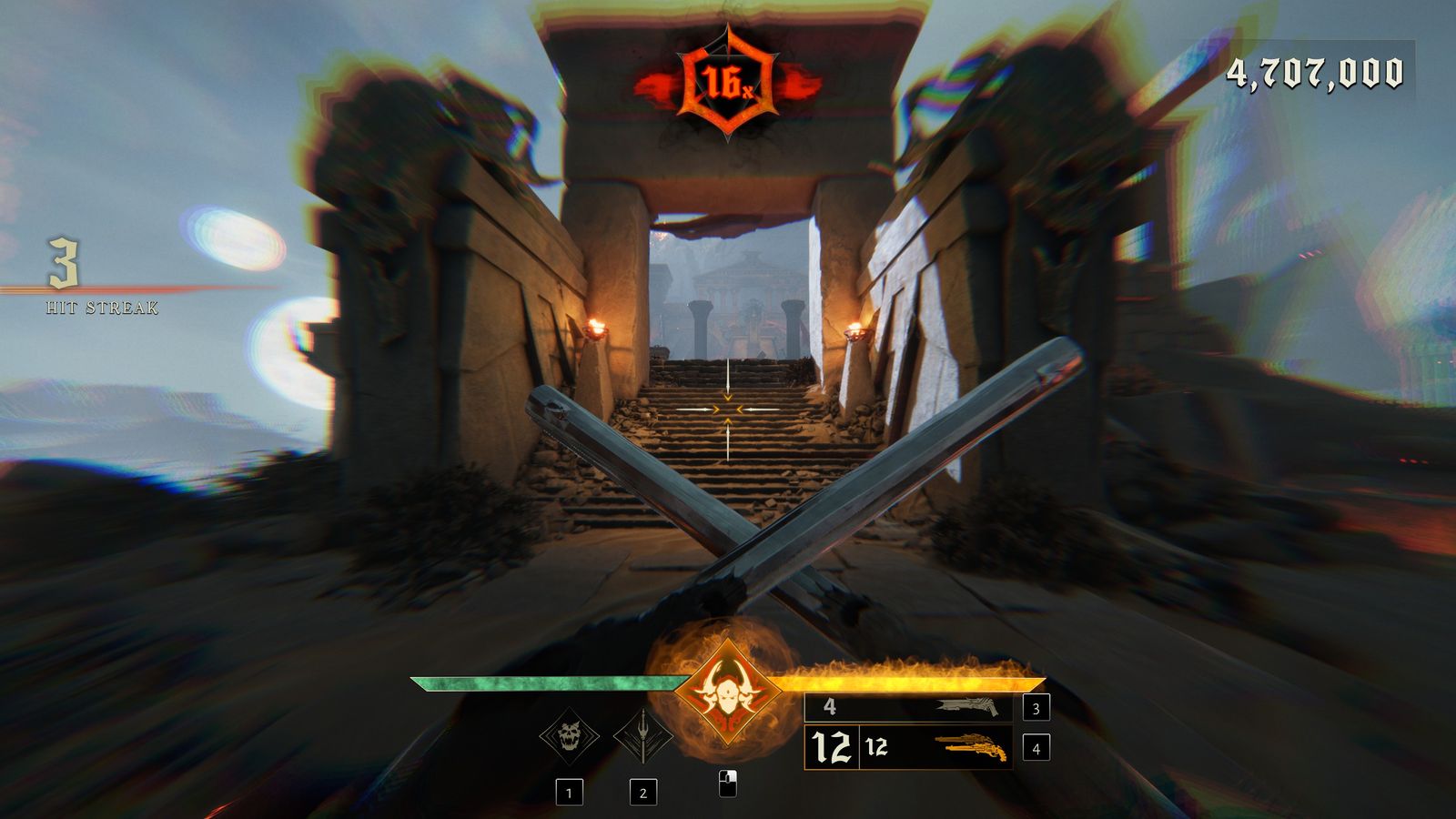 First, let’s start with the game’s pace. Did The Outsiders channel Lighting McQueen? Because damn, Metal: Hellsinger is speed. It’s so fast-paced that it’s a part of the challenge. You have the ability to use dashes, something that, if timed with the level’s metronome (which I’ll tackle shortly), grants a boost in the combo percentage and lets you maintain a high level of speed. The game also possesses i-frames, which grant you a bit of invulnerability, and that goes a long way when you’re facing hordes of enemies. Now speed is one thing, what about this metronome I’ve mentioned?

Now, this is where the fun begins. 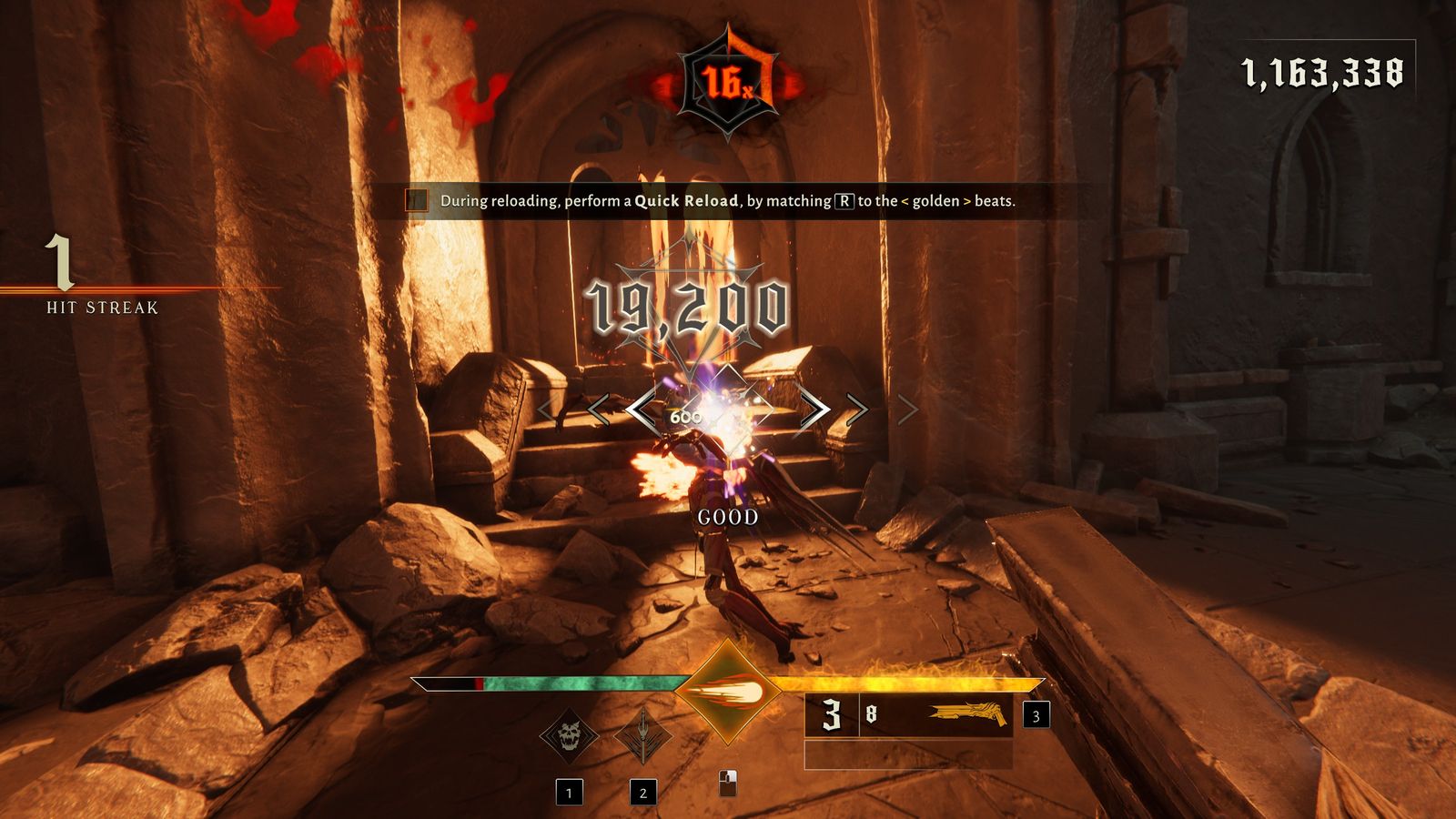 The thing that makes Metal: Hellsinger special is the ongoing metronome that is timed to the beat of the game’s OST, with songs provided by artists like Serj Tankian from System of a Down and Matt Heafy from Trivium. To hit i-frames, increase your combo score, hell even to deal damage, you need to be hitting buttons to the beat of the music. Think of it like Guitar Hero — each time you miss the beat your hit count gets reset and it damages your combo. The difference, however, is that the game solely centers around you hitting every beat perfectly, or good enough, to continue progressing through the game. You’ll miss a beat on occasion and that’s totally fine: you can either rematch it to the music, your HUD’s beat-matcher, or the fireballs and other visual cues in each level — all on time with the metronome.

As you land shot after shot, beat after beat, your combo will max out at 16x and you get a bunch of bonuses to reward you. The thing is, not only do you deal more damage and score more points the longer you maintain this 16x boost, the music also slowly gets better. There are several stages to the music, with the first being a standard metal beat to get you timed to the metronome. The music slowly progresses ‘til you can fully experience the song of that level. And that’s the thing; every level has its own song that you unlock and enjoy as you progress through the level — another reward to keep you engaged. 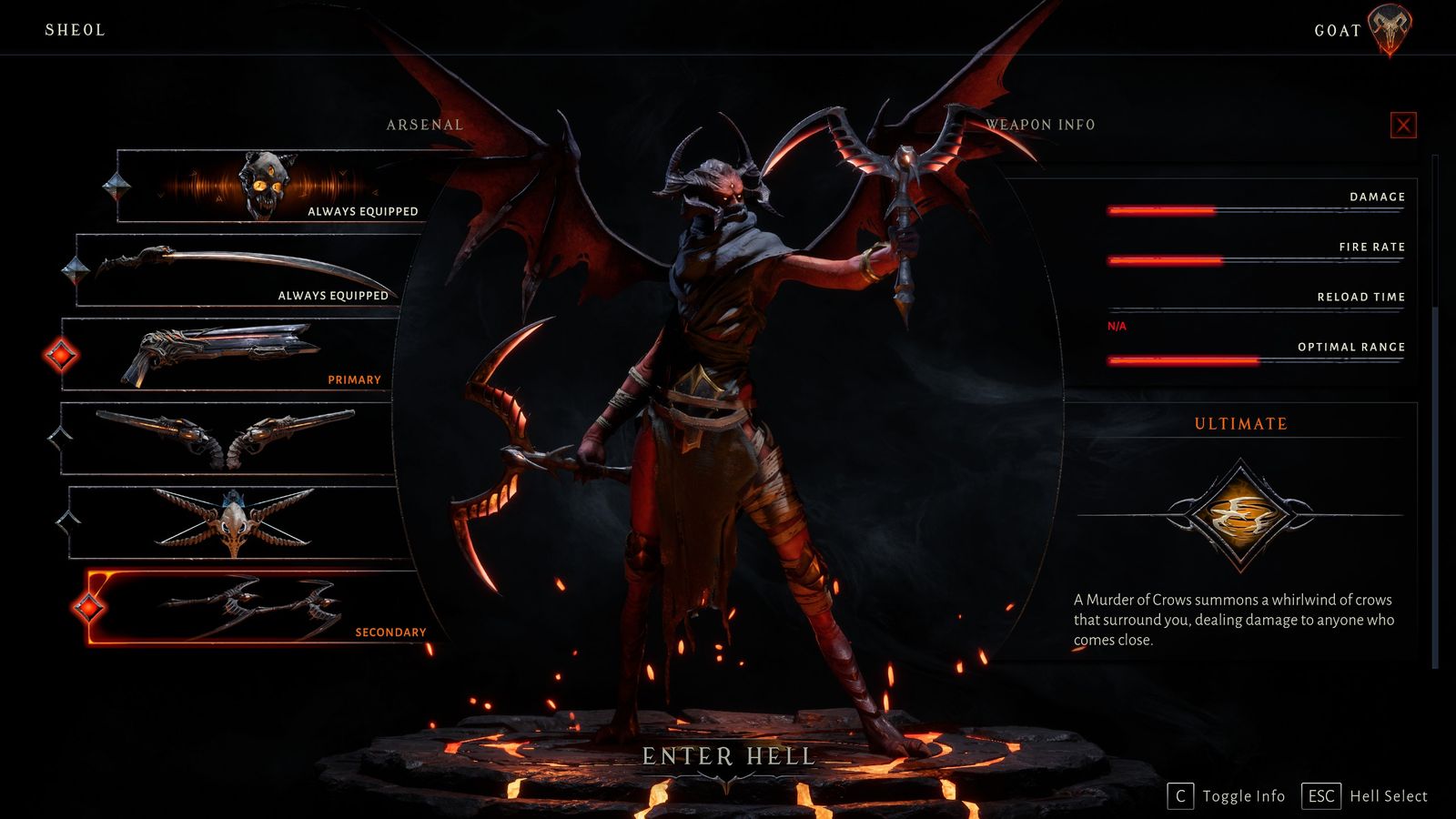 The weapons that you’ll come to experience are hugely fun to mess around with. Timing your shots with the shotgun and switching to your explosive crossbow to land a hugely devastating attack on time with the beat was one of the most enjoyable experiences I’ve had with gaming in recent memory. Every weapon has an unlimited amount of ammo, so you’ll end up picking your arsenal to suit your playstyle. You’ll enter every level with four weapons; your first two being a skull that shoots fireballs and a demonic sword that lends itself greatly to killing large hordes quickly, while the last two are up to you. Pick from dual pistols to boomerang demonic hatchets and charge the weapon’s Ultimate bar to unleash its special ability. From the Skull’s lightning strike that crystalizes every enemy on the battlefield to Blade’s massive increase in speed and damage, every weapon grants a unique opportunity to keep you fighting for longer. No matter what I carried into each level, I enjoyed every single damn minute of the entire experience.

Yet, that is one of the few areas that I had an issue with in Metal: Hellsinger. Now let me make it clear: the weapon types are great and they play to basically every play style. My issue stems from there not being more types of weapons. Of course, when the purpose of the game is beat-matching, you’ve limited yourself to the types of weapons you can incorporate. Things like flamethrowers, energy weapons, or automatic weaponry can’t exist in this game because of that niche, and that’s totally fine. I only wish there were more options to choose from. Timing the beats to your punches and crushing demon skulls would have been ridiculously badass, or getting to use a huge war hammer and turn your enemies into minced meat could’ve been another part to add to this amazing experience, but alas we’re limited to six types of weapons. 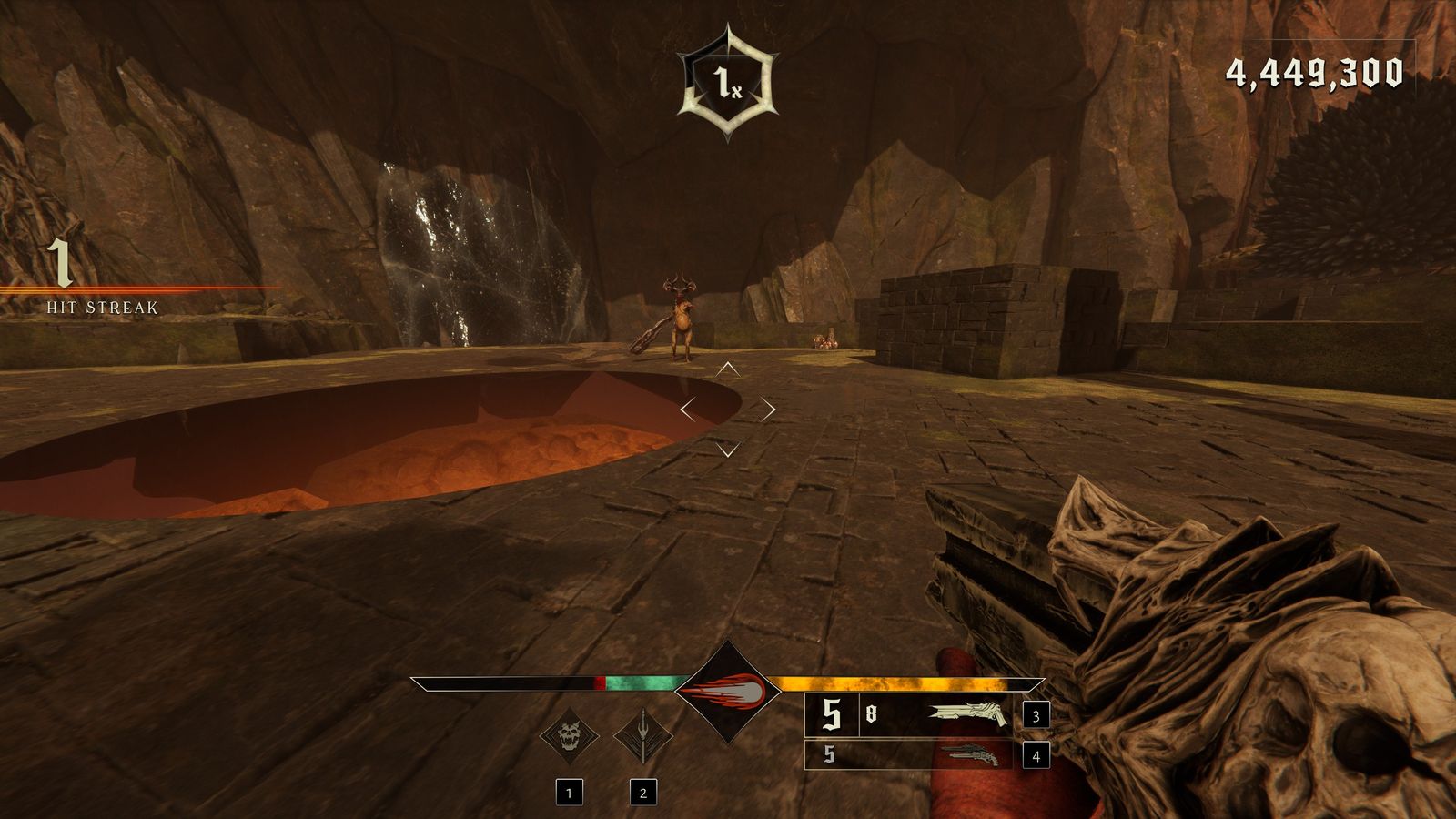 Now there are only two other issues I had with this game, both of which popped up only on the last level. As you can see in the image above, I encountered a rather strange sight. It only happened after I used the Blade’s ultimate ability and attacked with it before the animation had started. This only happened once and felt more like a freak of nature rather than something you’d regularly experience in the game.

The other problem was a bit more annoying, and I’ll tread carefully to avoid spoilers. During the boss battle of the last level, there were way too many sound effects emanating from the enemy’s attacks to even hear much from the OST. If this game didn’t require you to fixate on the metronome, the last battle’s huge amounts of bullet-hell BS-ery might have been a really enjoyable experience. And yet, I left that mission feeling a bit defeated. Sure I was matching the beat, but that was really from me bobbing my head each time a fireball shot up or a combo token spun. It felt like I was battling out of necessity, not because I wanted that dopamine shot each time I scored a Perfect. 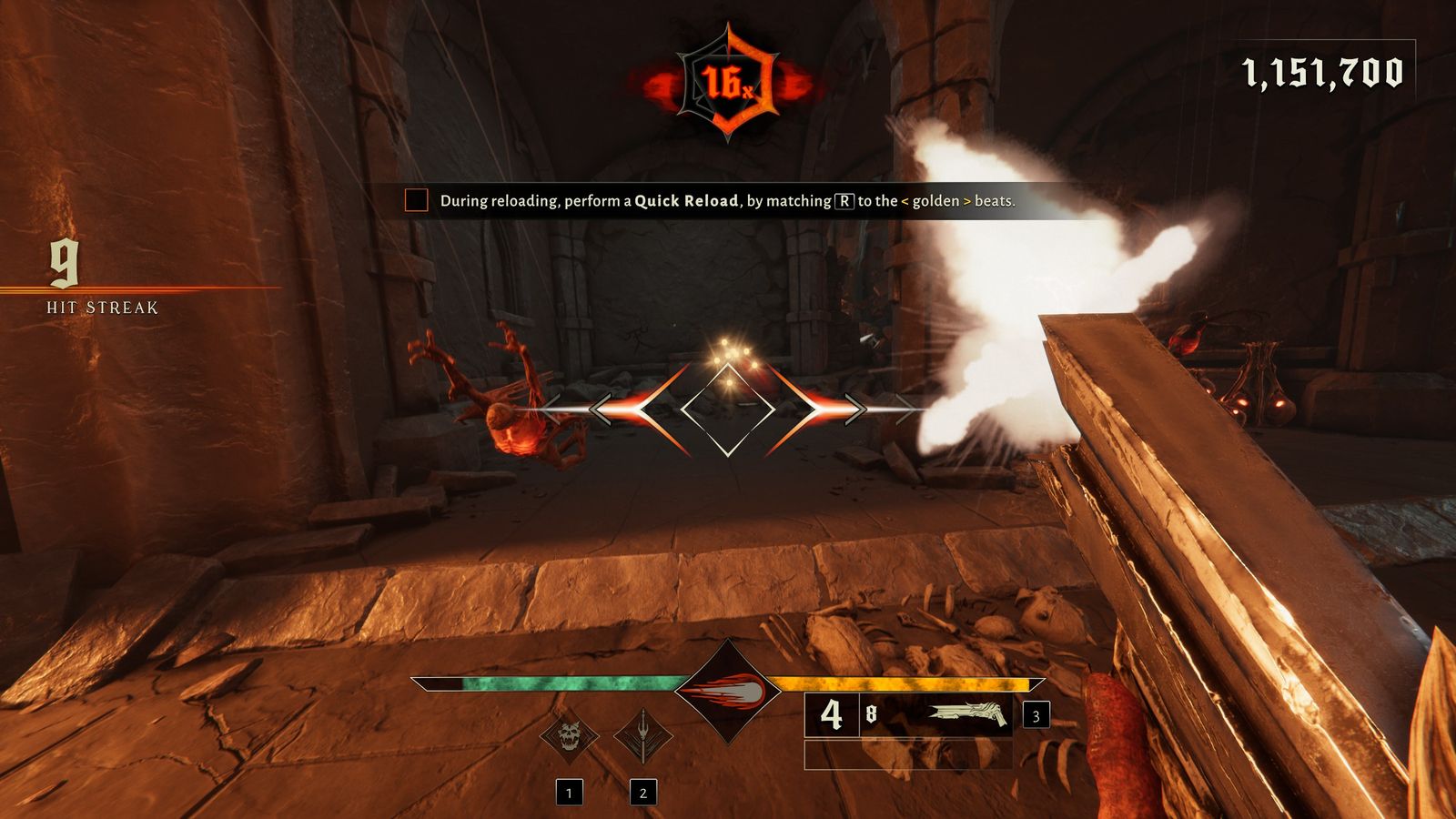 If you’ve read my reviews before, you’ll know what my next favorite buzzword is going to be. Replayability. Now, for a lot of titles, this is something that’s really important for developers to address during the game’s development. Metal: Hellsinger is no exception, and it’s fantastic to see that The Outsiders have already had this discussion. What makes boomer shooters so replayable? Leaderboards, high scores, speedrunning times; you get the gist. All of that is available post-completion of the game, with each level also rewarding you with a Challenge Mode. Given that the game took me about 3-4 hours to complete, I was glad to breathe a sigh of relief knowing that I wasn’t necessarily finished with the content. I’d hope that, one day, we might see a built-in mod manager as well — just so we can mess around and make some insanely heinous levels.

Can you tell I had fun with Metal: Hellsinger? You can tell it’s been showered in love by people who adore Doom, metal music, and rhythm games. The boomer-shooter, bullet-hell, rhythm genre isn’t something I’ve ever experienced before, but it’s now the gateway to a genre that I crave so much more of. The Outsiders have made one hell of a game, and I hope they’ll grace us with a sequel within the coming years.

Metal: Hellsinger has absolutely kickstarted the boomer-shooter, rhythm FPS genre. Of the handful of issues the game possesses, they're all overshadowed by its insane amount of entertainment value. There's no doubt that The Outsiders have created something extraordinary, something that absolutely needs a sequel. Although very challenging and not without its critiques, its an extremely satisfying experience through and through.

With a deep interest in writing, Ben followed that into a Journalism degree. As an avid lover for gaming, he is constantly expanding his library with console, PC, and VR games. He's obsessed with stealth games and loves hunting down the smallest of details inserted by devs.
Related Articles: Metal: Hellsinger
Share
Tweet
Share
Submit