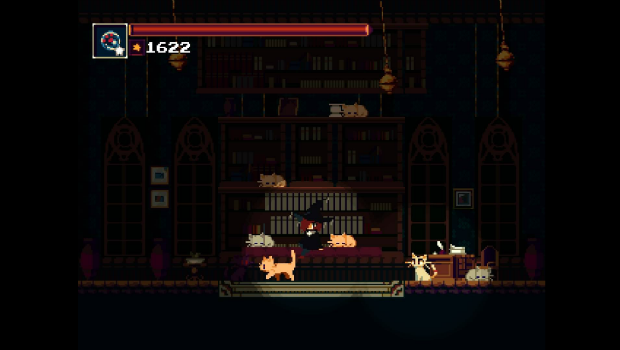 Have you ever played an old 8-bit style video game on a modern console in front of someone old enough to remember when that was the only option available? Perplexed, they invariably question “Why would you play that old game when you’ve got the modern graphics and physics of today available?” It is a fair question. With the beauty of modern gaming, what draws us back to that classic style?

Then, after playing Momodora: Reverie Under the Moonlight, an answer becomes clear. Each attack you employ feels smooth, and each jump and dash takes you closer to pure gaming bliss. Dark, creative, and beyond satisfying, Momodora provides a near perfect nostalgic adventure.

Momodora is the story of a wandering Priestess from a distant village called Lum. A demonic virus has spread to her village, and so the Priestess is traveling to the city of Karst to beg help from the queen. The changes reaching her village have transformed the city into a dark and grim place. To reach the queen, the Priestess and her maple leaf blade must traverse the depths of the twisted city.

Using 8-bit graphics with a bit of modern flair, Momodora is a fairly standard platformer that plays like a sped up, fluid Castlevania. The game is comprised of an outer forest area and the city proper, made up of several distinct districts. Each district has a unique look and contains monsters specific to the area. You’ll have plenty of secrets and extras to uncover as you move from district to district.

Each area contains one or more boss encounters, each providing a distinct challenge. “Challenge” should be emphasized, as some of the boss encounters feel a bit one-sided. A battle with an evil goddess that you encounter on multiple occasions is far too easy, but in contrast, a gaseous embodiment of sorrow (which honestly is one of the coolest bosses I’ve ever faced in a game) has a beam attack that can’t be jumped over, dodged, or ducked under.

For the most part, aside from a few boss encounters, the fighting is amazing. The Priestess moves with fluid precision and is incredibly easy to control. The enemies are predictable but still routinely hard to defeat, just like the enemies in old platformers used to be. I love the unique use of a maple leaf as the main weapon, and that is all not to mention the signature ability of Momodora.

The Priestess eventually finds the wonderfully fun and frankly adorable ability to transform into a cat and vice versa. The cat can attack just the same, runs faster, and jumps a bit higher. Some areas are only accessible as the cat. The cat cannot climb ladders, however, meaning you’ll be switching back and forth often.

The game has an overall spooky aesthetic, and they pull it off well with gloomy interiors akin to abandoned children’s libraries, a geothermal energy chamber that feels like a fiery prison, and a castle fully twisted by a foul evil. The music is brilliant and fitting, each area getting its own signature sound. The overall quality of the sound effects is very high as well, and when the whole product comes together this truly feels like a NES game lost to time.

Momodora: Reverie Under the Moonlight

Momodora: Reverie Under the Moonlight is a triumphant release, capturing all the nostalgic wonder of 8-bit platforming within a very unique shell. Gloomy, challenging, and only occasionally unfair, Momodora is a fantastic adventure with a fun story and lots of secrets to uncover.

Patrick Rost has been with Gaming Trend since 2013. At first focused on sports coverage, Patrick has gone on to cover a wide range of games and other products for the website. Outside of Gaming Trend, Patrick writes and records music, grinds perpetually in Elder Scrolls Online (PS4), and lives day to day with his two dogs, Bob and Stella.
Related Articles: Momodora: Reverie Under the Moonlight
Share
Tweet
Share
Submit