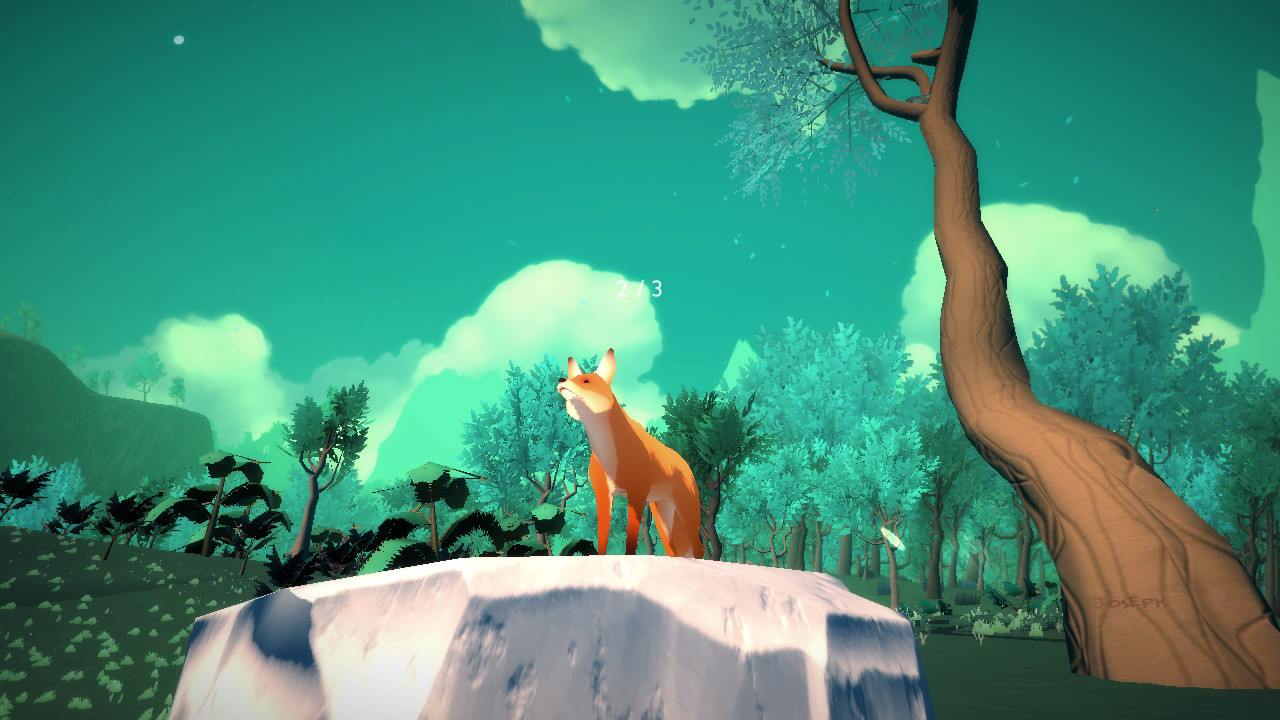 Dreams and memories have odd ways of intertwining, and that’s just what The First Tree is about. It’s a game about a man explaining a dream he had about a fox to his wife. You play as the fox, who wanders across various, gorgeous terrain in search of her missing kits. As you explore, you unlock memories of the dreamer’s past, finding fragments of his experiences scattered across the landscape, and triggering him to narrate the stories attached to these objects. It’s a beautiful and emotional journey, in which the narrator explores life and confronts death.

Part of me feels ill-equipped to review this title, as its major focus revolves around the pain of losing a parent, and I have been fortunate enough to avoid this experience so far. Even if I had this experience, it somehow feels wrong to assign a score to what is so clearly an exploration of personal grief, an outpouring of art fueled by pain and loss. There’s something raw, personal, and incredibly touching woven into this game, and that, more than any technical perfection, is reason enough to spend a few hours lost within a dream of a fox.

While this is primarily an exploration game, The First Tree has a surprising amount of platformer qualities. You wander the landscape collecting little points of light which mostly serve as a way to guide you in the right direction. Some of these are on the ground, but some are in the air and you must jump or double-jump your way up to them. While the game does keep count of how many you collect, they do not seem to have any real impact on your game. You’ll also encounter groups of three butterflies, which will circle the fox and boost your jumps. One part of the game requires that you collect three batches of butterflies, which is somewhat challenging in and of itself, and then leap over a particularly large rock in order to proceed. This jumping element was never overly challenging, but I did find it to be a little distracting compared to the dreamlike, wandering nature of the rest of the game.

The physics in the game are a little odd, but nothing outside of what you’d expect from a low-poly game, especially one featuring a quadrapedial character. The fox sometimes feels a little stiff when she jumps off something, and she can stand oddly on uneven terrain. That said, even though it very much felt like I was going to, I never once got stuck, and was always able to work my way out of any awkward spot I managed to wedge myself into. I’ll also mention that the framerate did stutter a little, but there is a patch coming within the first week or two of release that should smooth that out.

The world inside the game is stunningly beautiful. Snowy fields, flowering meadows, and lush forests all play out in slightly abstract shapes. It fits nicely with the dream theme of the game, though I do wish that the dream elements had been more strongly intermingled where the everyday, human elements are concerned. Everyday items, including toys, trucks, camping equipment, and other fragments of the narrator’s memories dot the landscape, and while they don’t feel entirely out of place, they feel like they were dropped in to create a bridge between the fox and the narrator, rather than actually being part of the dream.

The soundtrack is amazing. It’s soothing, it’s intense, and it absolutely draws you into the world. There’s a lot of world to be drawn into, and exploring these beautiful levels can occasionally be as much of a chore as a delight. Moving on to a new landscape requires different things, sometimes it’s simply finding the exit, or sometimes it’s finding an object to interact with, thus allowing the narrator to tell his story. Important points are identified by beams of light which reach into the sky, unfortunately these can be easily obscured by trees or terrain. It’s also easy to get turned around in the larger maps, and on more than one occasion I thought I’d found a path forward, only to find myself at a boundary, unable to pass an invisible wall. Invisible walls are incredibly rare, but I was already lost enough that the few times I encountered them, they stuck out very clearly in my memory.

I’m going to try and speak to the emotion of the story without giving things away. You explore a dreamscape as a fox while two people speak, explaining their grief, sharing their histories, and comforting one and other. It’s touching, moving, and melancholy. Death, neglect, love, and loss are spoken of directly, overlaid with imagery, both real and fantastical, which helps you open your heart to these experiences, even if you’ve never lived them yourself. This is a story in which the ending is not the end, reality shapes dreams, dreams shape reality, and your own words will impact the story of others. It’s a short but moving game, and one that made me feel more human because I played it.

The First Tree tells an incredibly personal and melancholy story about the loss of a loved through the eyes of a fox within a dream world. Wandering through beautiful, abstract worlds, you learn the narrator’s story as the fox searches for her missing kits. It has a surprising number of platformer elements, given the nature of the game, but doesn’t distract from the beautiful story within this short exploration game.

Best known online as damphyr, Kay Purcell is a purple haired popular culture expert and San Diego Comic-Con panelist who spent fifteen years as as a Senior Community Manager and Brand Writer for DeviantArt. An avid shiny Pokemon hunter, she has a habit of nerding out over video games, cats, VR, and geek culture.
Related Articles: The First Tree
Share
Tweet
Share
Submit