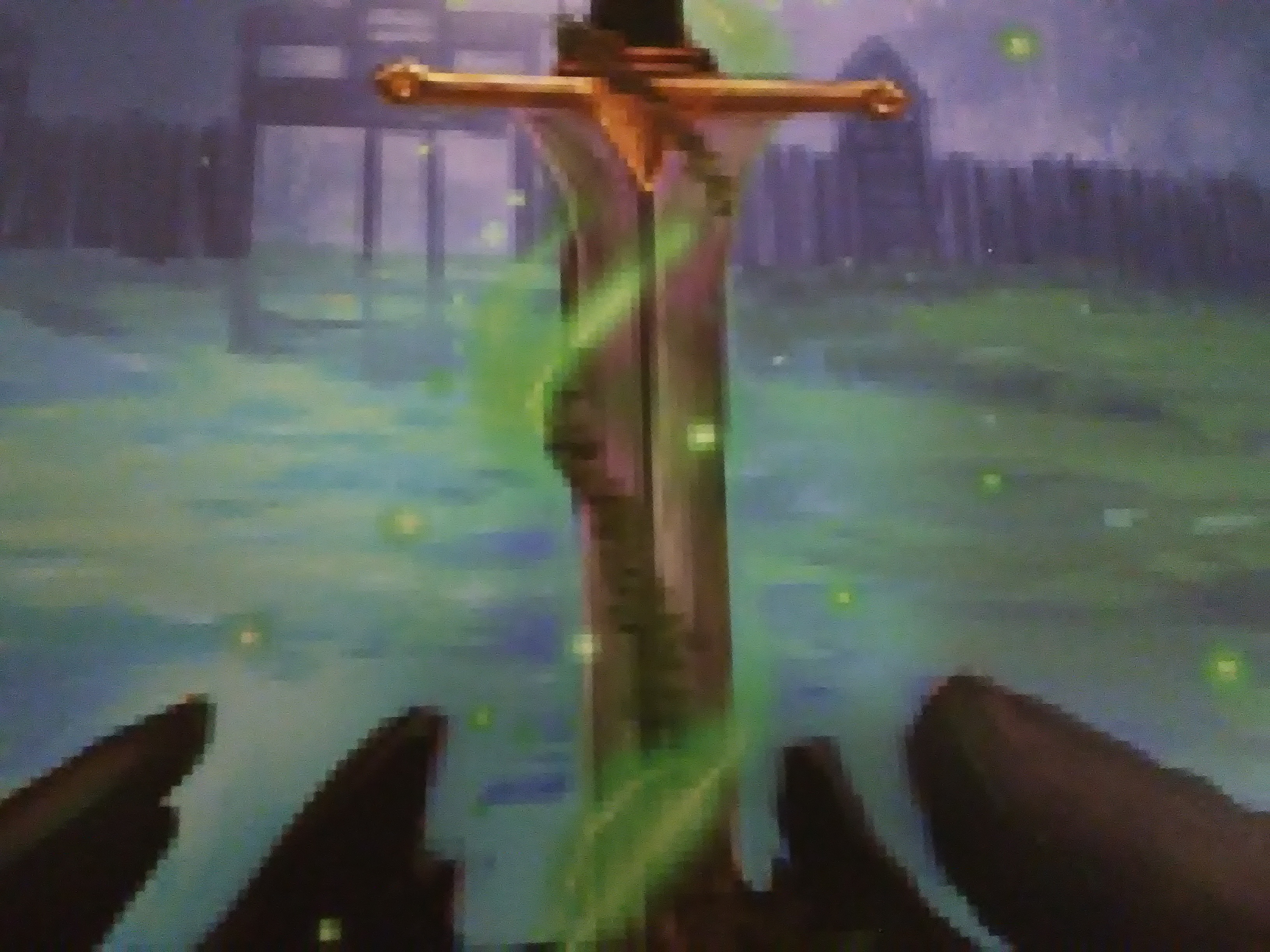 If you’ve ever wanted a tabletop experience/16-bit video game adaptation of Arthur’s quest for the grail, Super Camelot might be right for you. If you want that experience to be fun and well-designed, it might not be. While Super Camelot’s presentation contains a great deal of thoughtfulness and charm, the actual experience is lacking in anything that would make it memorable. Is it terrible? By no means. But beyond a few clever nods to NES game design, there’s nothing that makes Super Camelot stand out enough to call attention to itself.

The basics are familiar enough in their way. You play as King Arthur, Lancelot, Guinivere, Merlin, Nimue, and Iseult, traveling through the forest to seek the Holy Grail. Iseult in particular is a strange choice, being taken from a more obscure portion of Arthurian lore but it’s clear that the designers wanted to present an equivalent number of male as female character options. Moreover, I’m happy to see the audience introduced to new, interesting portions of Arthur’s story. (In all seriousness, go look up the tragedy of Tristan and Iseult; it’s worth doing.) The particulars of this adventure are pulled from old-school gaming. You will travel grids of instantaneously spawning screens, each replete with enemies and objects that you can crawl through for treasures. 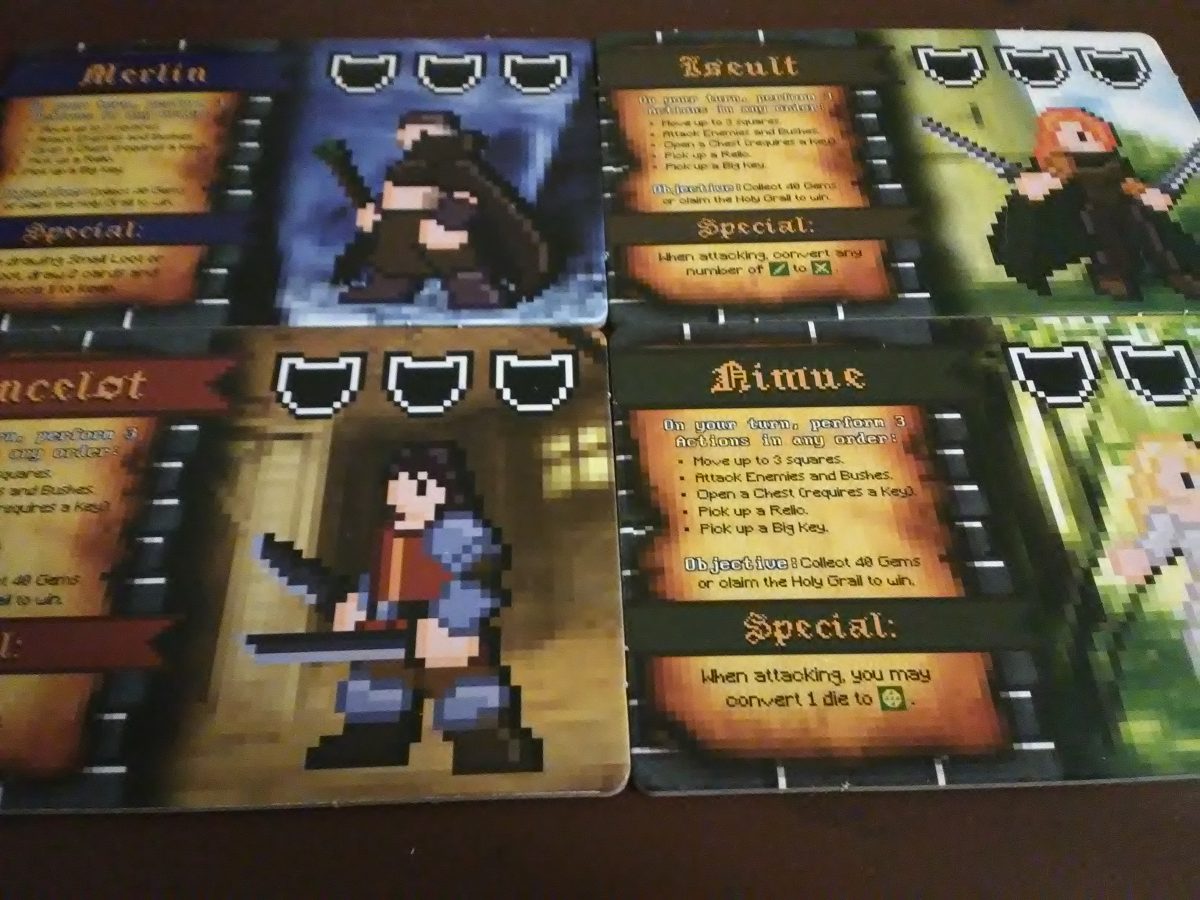 No space is wasted on the character boards, giving you helpful information to play as well as nice presentation of your character.

It’s hard not to smile as you first look through Super Camelot. All of the components, made up of simple cardboard standees and boards, help sell the pixel art style. The box cover comes across as more blurry than pixelated, but the castles, objects, and characters read across as appropriately blocky and colorful. Each pixel is used judiciously, to imply a lot with little effort, and from the top every object looks exactly as it would from an old CRT monitor with an NES hooked up to it. The trees are slotted together cardboard as well, just like the miniature castle at the center, containing the Holy Grail. Yes, there is a strange implication in that the characters know where the grail is at the start and are seeking for relics to unlock the way in, but these kind of logical gaps are appropriate to the bizarre logic of old NES games. Just like those games, each screen resets once you leave it, not including unlocked treasure chests. 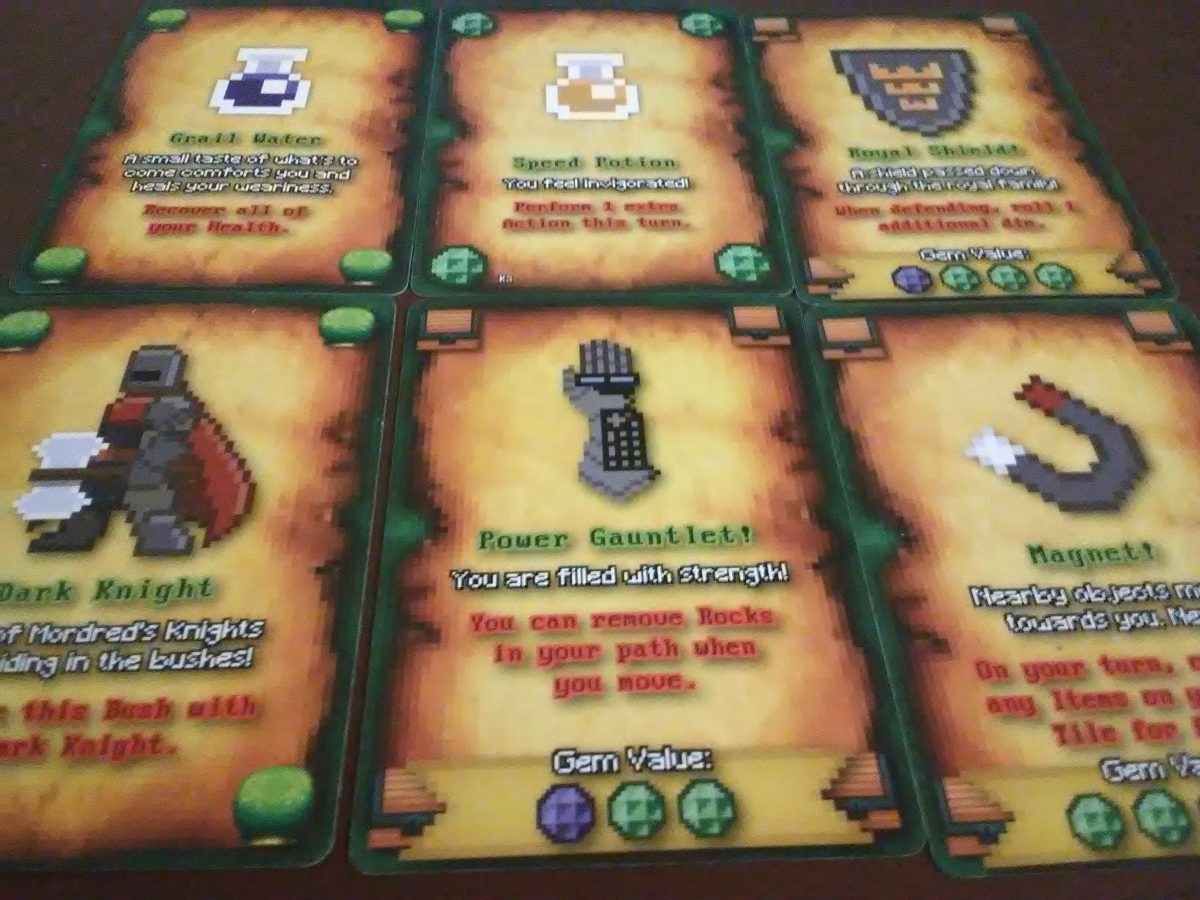 I’ve got doubts about how well the cardboard itself will hold up. It’s somewhat thin, and the edges could get nicked, but this is fairly acceptable wear and tear for a game of this type if used consistently. The rulebook is also not the best presented. The text is natural language, and often more wordy than necessary to communicate simple concepts. None of the rules are actually complicated, which makes it all the more surprising how much effort it can take to learn them. The rules truly aren’t complicated, which in its own way is a flaw.

You see, Super Camelot has something in common with many early video games that it likely doesn’t want to: it’s not that great. Yes I said it. A large portion of NES titles don’t hold up, modern standards or not. But that digression is best left for another day. You see, even during your first game of Super Camelot, the smile first spread by piecing together the board will fade as you realize how little the game has to offer.

The basics of Super Camelot are easy enough to explain. You begin by setting up the castle and its Grail, setting up your characters on the outside. Each are identical but for one special ability, all of which seem reasonably balanced and useful. During your turn, you can move 3 squares, attack by rolling specialized dice and checking for damage symbols, opening a chest (if you have a key), picking up a special item, or claiming the Grail. As you venture out into the forests, you will choose from randomly selected map tiles, populating them with enemies, obstacles, and chests along the way. Whoever collects 40 gems or all 3 special relics and then the Holy Grail wins the game. Practically speaking, players will likely find the relics before anyone has the requisite number of gems, and there is nothing to spend gems on, so unless someone is specifically gunning for money, that portion of the game is unlikely to see the light of day. 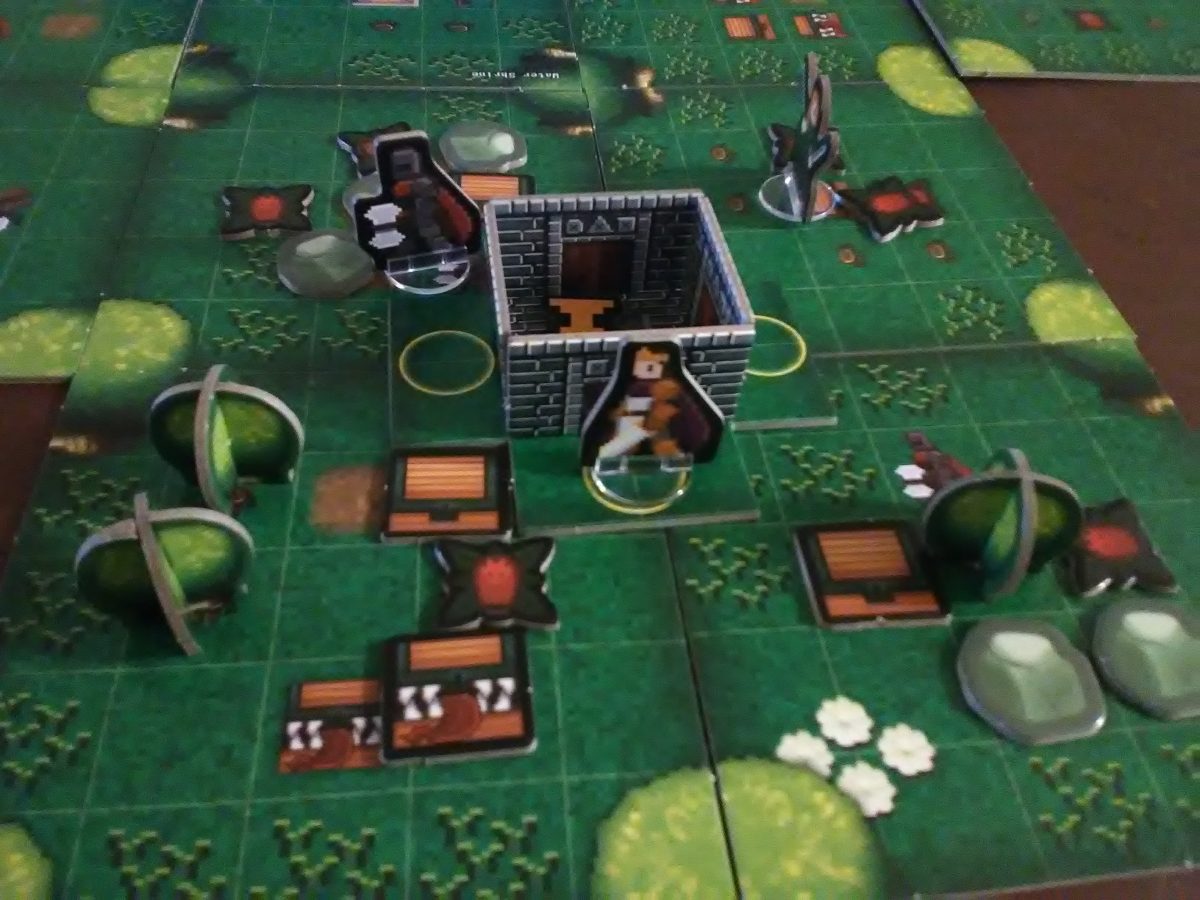 Things can get cluttered quickly, but it’s clear what everything is while you are playing

Super Camelot, simply put, is lacking in meaningful decision making. You walk, you fight, you gather some items, but in the process of doing so there is little variation in the experience. There are only 3 enemy types, for one. While the Mimic, which steals treasure, and the Carnivorous Plant, which shoots stones if there is an unobstructed line of sight make you stop and think, but only occasionally. Usually your goal is to move quickly, seek Black Knights to kill for the key, use those keys to obtain Relics, and rush back to the Grail to win the game. It’s a lot of running around with occasional stopping for combat or treasure, and there isn’t much to make you want to come back to the game.

There’s little that really irks one about Super Camelot, but by the same token little to make it really stand out. After a game or so of wandering around, rolling some dice to fight, and using the occasional bomb or bow item (along with enemies, there is too little variety in treasure as well) you will feel that you’ve seen everything there is to see in Super Camelot. Moreover, you have no way to interact with your opponents. You can’t attack them, can’t steal from them, and beyond possibly kiting enemies towards them or taking items intended for them (both of which are difficult and highly situational) the only way to interact with your opponents is by use of a bomb, a rare resource better used in other places. Even the exploration is incredibly limited, as you find that each square comes preloaded with its features and there aren’t that many squares to begin with.

It’s possible that an expansion with more enemies and cards, more randomization, and just more to do in general could make Super Camelot more engaging. As it stands, the charm wears off quickly and leaves little wanting you to return, and not much to return to even if you make that decision.

Super Camelot is a game with all the pixelated attractiveness of a 16-bit title, with no such draw to its scant mechanics. After very little time spent wandering its self-populating tiles, you will find how empty and lacking in decisions it really is.50

John Farrell is a legal aid attorney specializing in domestic violence, living in West Chester Pennsylvania. You can listen to him travel the weird west as Carrie A. Nation in the Joker's Wild podcast at: https://jokerswildpodcast.weebly.com/
Related Articles: Super Camelot, Tabletop
Share
Tweet
Share
Submit