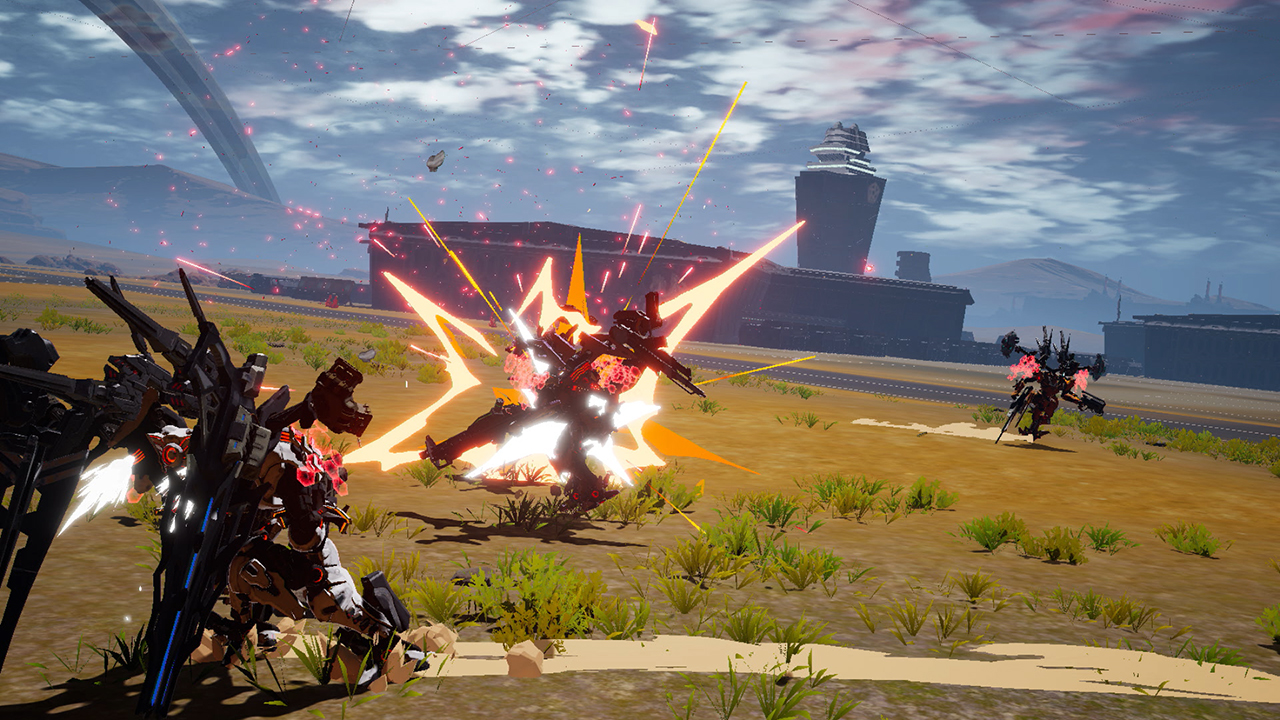 I didn’t know what to expect when I started Daemon X Machina. The demo was notoriously bad, and Nintendo didn’t put much marketing behind it. It’s not a game I heard much about, so I was skeptical when I started playing. Thankfully, my skepticism was undeserved as Daemon X Machina is a competent mech-based action game. It’s not perfect, and I feel it is lacking in ambition to be something truly memorable, but I’ve had a good time with it, and I look forward to playing more.

One of the first things you’ll notice when you boot up Daemon X Machina is the art style. The robots and action all look fantastic. The people? Not so much. This isn’t because they are poorly designed but rather caused by the art style itself. The characters are all very visually unique and I would like them more if they didn’t look sort of like clay versions of what they are supposed to look like. Thankfully, you don’t see much of them outside of their suits and this only impacts the actual in-game graphics, they all look fine in their text portraits. This was clearly designed to make robots look awesome, not people. 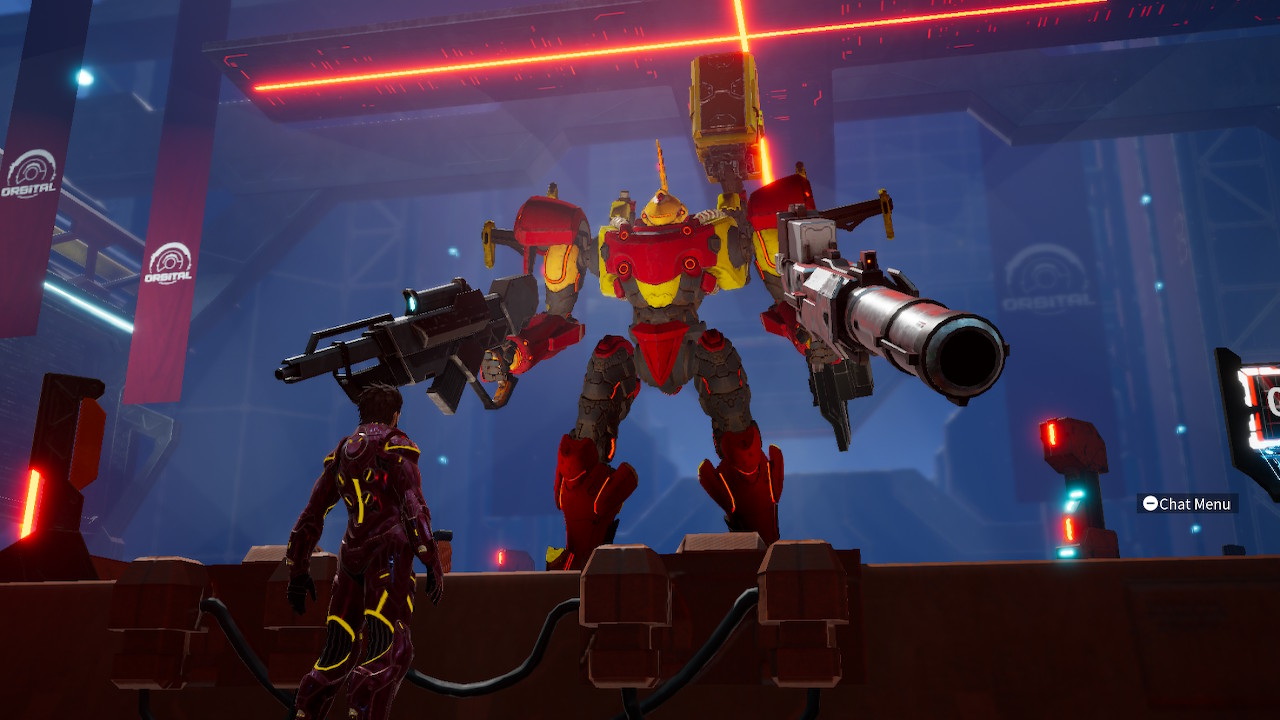 I probably spent too much time playing around with color schemes for my Arsenal.

It certainly does a good job of making the robots look awesome! I loved spending time customizing the color scheme of my mech to make sure it looked suitably badass. Killing enemies just isn’t the same if you’re not doing it in style! The customization options for both your characters, known as an Outer and your mech, known as an Arsenal, are varied and satisfying. My only complaint here is that you can’t individually customize the legs like you can the arms. It’s a rather odd oversight, but it doesn’t ruin the extensive customization options.

Once I spent far more time creating a character and Arsenal than I would care to admit, I found that the rest of the game maintains this level of detail. The story is interesting, and I enjoyed learning about the different characters and factions. You see, Daemon X Machina takes place on Earth after a chunk of the moon has fallen into the planet. This disaster also brought about a valuable energy source called Femto and caused much of our AI to go rogue. Outers mercenaries who developed special abilities from the Femto, serve as protectors of Earth, and work for the three main factions: Zen, Horizon, and Sky Union. The story grows and introduces new mysteries which allows it to stay fresh for the entire 15-20 hours. 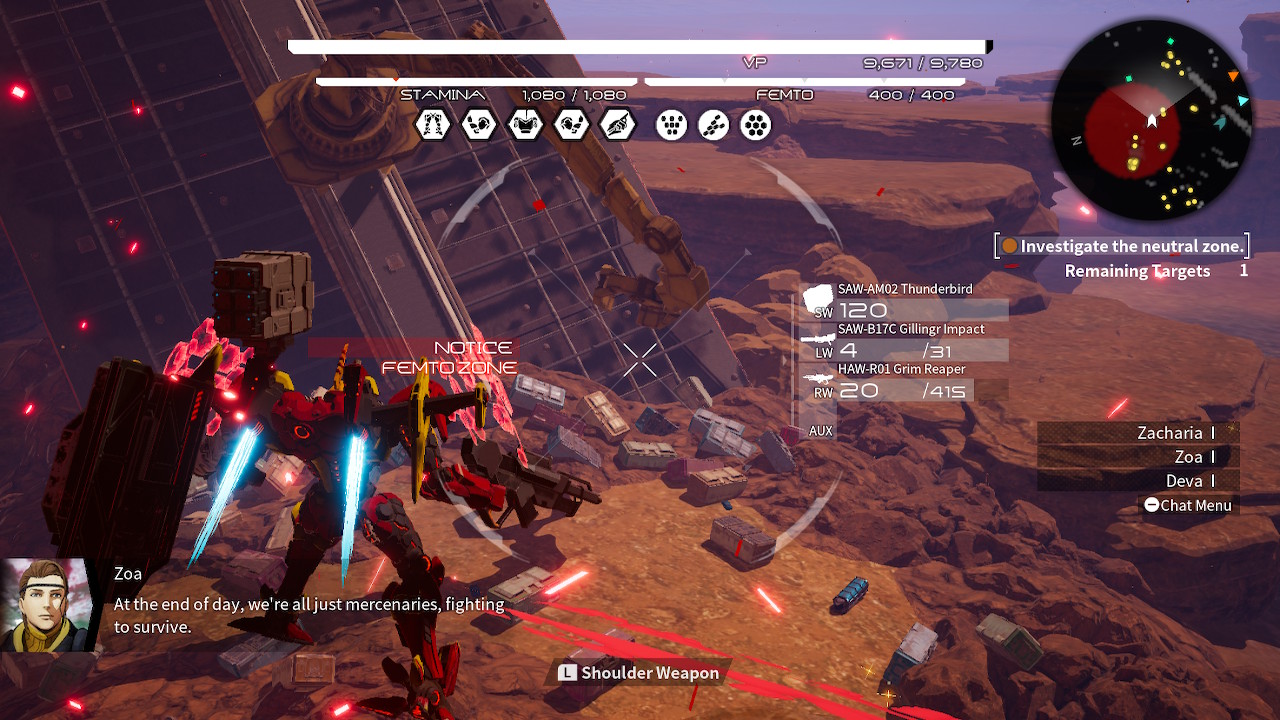 Looks cluttered? You can actually turn off just about all the HUD features if you want.

The other mercenaries who you will spend a majority of the game partnering up with or fighting are all quite interesting. Saviour is a poetic warrior with a sense of justice. JohnnyG is a newer warrior who is trying to find his place. You have everyone in the Western VII who is fighting to reduce their prison sentences. These characters are unique, and I enjoyed watching how they interacted and grew throughout the story.

Accepting missions is much like Monster Hunter or God Eater. You have a list of missions you can accept based on your mercenary level which increases as you finish story missions. You can also accept optional free missions which allow you to unlock new gear, get some money, or recruit new mercenaries for help. The free missions tend to be much shorter than the main missions, making them a perfect way to get money or resources to level up your character. The character upgrade system is pretty neat in Daemon X Machina. Upgrading your Outer allows him to perform new feats or improve his skill set both inside and out of his Arsenal. Some of these upgrades impact the way your character looks, such as increased aiming giving you robotic eyes, which I found to be a fun way to mark character growth.

You accept missions, eat ice cream, customize your Arsenal and more through your Hangar. Now, I will have to dock points here since there is a dog in the hangar that you can’t pet. That’s just teasing me. I mentioned eating ice cream and it is used as more than a delicious treat here. You combine different combinations to get buffs, like increased boost speed, for the next missions. It’s never necessary, but it’s an easy way to give yourself a boost for the next mission. 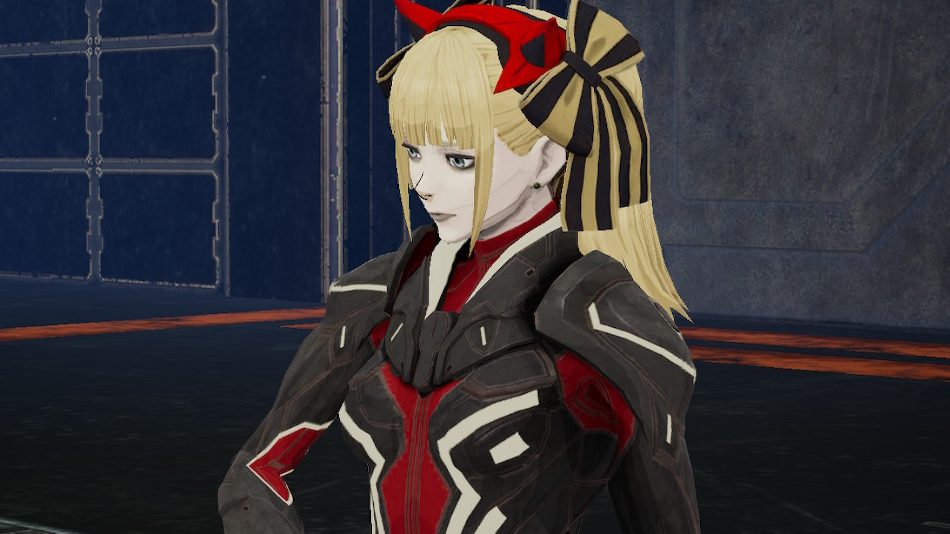 While the story is interesting, it’s the combat that’s going to keep you coming back for more. Flying around in the air or skating on the ground is fast and contributes to the frenetic pace of combat. You will often be fighting dozens of AI enemies at once and making full use of your arsenal is important. Combat is very customizable thanks to the variety of armor and weapons available. Do you want to be a melee specialist who focuses on heavy armor alongside a variety of fast or heavy swords and maces? Or do you want to be a lightly armored sniper who uses their speed to quickly move in and out of range to attack? There is plenty of room to experiment, and I found every style effective in their own way. You can equip up to four different weapons, so you have plenty of options to make your Arsenal the perfect killing machine.

While most of the missions are perfectly fun, there are a few that got very tiring. In the second half of the game, the missions have you fighting other mercenaries rather than the AI robots, and this bogs down the combat. Fighting the other mercenaries just isn’t as fun as destroying dozens of robots quickly and efficiently. I would have preferred them to space these fights out more so they feel like unique challenges rather than a constant presence. Still, these fights are fun, just not as fun.

The missions themselves are as varied as your arsenal of weapons. There is enough here to stop it from becoming dull. You have your destroy all the enemies, your boss fights, escort missions, and more. The variety stopped the combat from ever becoming too stale as I felt like I was always doing something a little different. 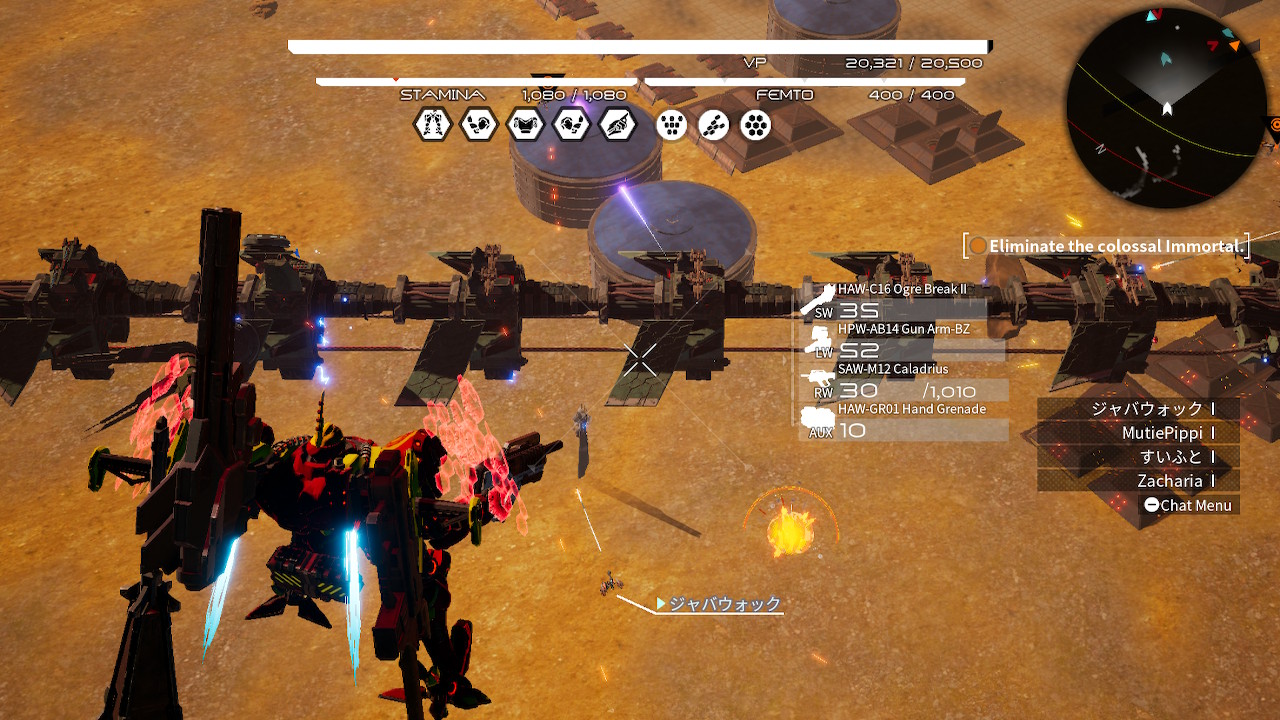 Most of the online matches were killing giant bosses.

On a technical level, I only ran into one real problem. The game runs great even with all the explosions, bullets, and lasers going off at any time. I didn’t notice any real decrease in quality when I went handheld and the smaller mission structure make this a perfect game to kill half an hour with. My one problem is,occasionally when fighting another mercenary, the opponent will just go haywire. They will glitch all over the place making the fight impossible. Thankfully, this only happened to me twice and restarting the mission was all it took to fix it.

I enjoyed my time with Daemon X Machina, but I can’t shake the feeling that it could have been more than just a great mech action game. Many of the mercenaries have formed groups, like the Western VII, but it never really amounts to anything. There is no reputation system to make you friends or enemies with these different groups. Likewise, there is nothing to make you friendly or hostile towards the three factions either. This game could have been more if they allowed you more options about how to interact with these different groups through side missions or alternate mission routes. It’s a great action game as it stands now, but I could have easily seen this being so much more than that.

Daemon X Machina is a great mech action game in a genre that has pretty much disappeared. The combat and customization options are first rate and I never got bored with experimenting with different weaponry. This really is like a mecha anime, and it’s one I highly recommend, even if it isn’t as great as it could be.

Daemon X Machina is a great mech action game in a genre that has pretty much disappeared. The combat and customization options are first rate and I never got bored with experimenting with different weaponry. This really is like a mecha anime, and it’s one I highly recommend, even if it isn’t as great as it could be.

Austin Fern has been playing video games his entire life. The first console he truly fell in love with is the PlayStation 2 with Sly Cooper, God of War, and many others really leaving an impression. He enjoys all genres of games from FarCry 5 to Danganronpa and everything in between.
Related Articles: Daemon X Machina
Share
Tweet
Share
Submit