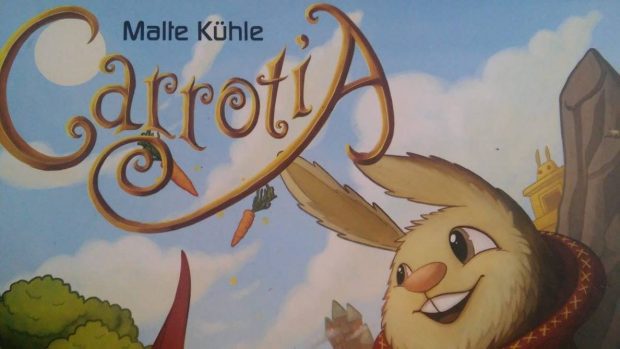 Starvation looms, birds stalk the skies, and you can only save the warren by braving the forest and returning home safe. Carrotia is a cooperative tile-laying game that you can only enjoy as long as you are comfortable with very technical definitions of those three terms. The concept and gameplay share a similar frustrating feature: both, though simple in concept, quickly vex you as with their details, never managing to leverage their unique features to approach being fun.

With the coming of winter, you must choose your rabbit character and travel to the forest to gather carrots, making sure to keep away from the predator birds which will hound your travels. Before getting any deeper into the concept or gameplay a few questions come up: why am I going to the forest for domesticated carrots? Why do the rabbit characters include a ghost, vampire, sailor, and clown? There is no consistent theme, and two of those characters would not need to eat. Why is one of the birds a bat? Could the designers not think of six types of birds that you might encounter?

Knowing none of these questions will get answered, you shut them out of your mind and move on to the gameplay, hoping something better will come out of this experience. Each round, of which there are three, is broken into two segments. In the first, you draw from a stack of labyrinth cards which depict a map of a 3×3 grid of tiles. In the second round, the grid increases to 4×4 and finally 5×5 in the last round. The map depicts the labyrinth’s entry and exit points as well as where you will place carrots and birds within it. Each player draws randomly from a stack of road tiles from which you must all build the labyrinth, making sure each tile is accessible.

In this first phase you are on a timer, adding pressure as you attempt to piece it together. This time crunch could necessitate cooperation, but it is more likely to result in one person taking charge and making sure it is done right. Any mistakes in the labyrinth force you to add another bird, though the rules do not indicate where or how you place it. Whether this is actually an effective consequence is surprisingly difficult to discern, as you find in the next section.

Once you have built the labyrinth, your next task is to begin at the entrance, collect carrots and exit before running out of moves. Failure to exit successfully means losing every carrot you have collected for that round. For each of the three rounds you have 10, 15, and 20 moves respectively before the round is over. After every move, you roll a die for each bird token which will depict how it moves that turn. There is a special die for each bird which would be a nice addition were each die not identical, and therefore utterly superfluous. Once birds encounter you or a carrot, they have an effect which may be good or bad. These effects can either be helpful, meaningless, or devastating, making the randomizing effect of the birds much more frustrating than it is challenging.

While each rabbit has a helpful ability that it can use once per round, it is the only part of the game that is singular to any given player. There is one rabbit to move, one score pile, and one optimum path through the forest, birds aside. The cooperative nature is, I can only assume, intended to come from everyone contributing to the decision, but intention does not equate to mechanics. There is a single choice to make per turn and nothing preventing one person from being the driving force behind that choice. I could forgive this if there were enough moving pieces to make this choice interesting, but Carrotia has nothing to offer its players in this regard.

Finally, once you have gotten through all three rounds, you count the carrots you have collected and…you’re done. There is no requirement to hit before you have won, no way to mark different levels of skill, and no way to differentiate complete failure from stunning victory unless you play the game enough times on your own to determine an average. From the simplicity and aesthetics, Carrotia is selling itself as a game children can be engaged in, but in doing so does even the youngest kids a massive disservice.

To its credit, Carrotia is a short game, clocking in at around half an hour. The tiles and dice are all solidly made and should hold up long term. The art is especially inviting and adventurous, with each rabbit and bird exhibiting unique personality. It does nothing to resolve the key issues with the game, which are enough make you seriously stop before you consider playing it.

Carrotia is a muddled game that is never sure of what it wants to be in terms of theme or mechanics. The puzzle and cooperative elements show some promise but ever enough to overcome the game’s inherent deficiencies.

John Farrell is a legal aid attorney specializing in domestic violence, living in West Chester Pennsylvania. You can listen to him travel the weird west as Carrie A. Nation in the Joker's Wild podcast at: https://jokerswildpodcast.weebly.com/
Related Articles: Carrotia, Tabletop
Share
Tweet
Share
Submit