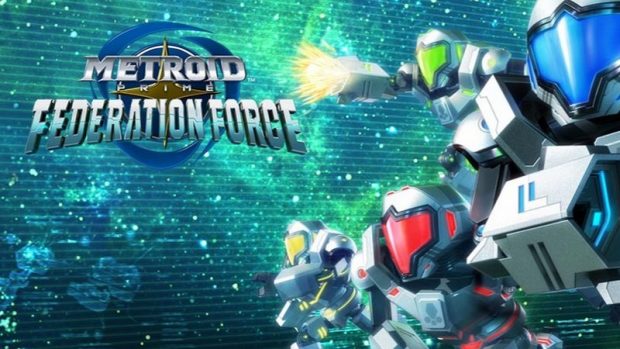 From the moment it was announced, Metroid Prime: Federation Force has been met with skepticism. Fans who had been clamoring for a traditional sequel to the normally-stoic Metroid series were understandably discouraged by this cutesy and colorful spin-off. It comes with great surprise, then, that Metroid Prime: Federation Force still succeeds at creating an enjoyable, if still flawed, experience which manages to carve out its own unique personality within the franchise. Those hoping for a traditional Metroid adventure may still be unsatisfied, but Federation Force defines its own appealing identity while retaining familiar series themes.

In many ways, it is to Federation Force’s credit how well it manages to deviate from past games while respecting the Metroid formula. There’s still moody atmospheres, a straightforward combat system and some stunning alien creatures – some of Metroid’s core tenets. But no longer starring bounty hunter Samus Aran, the series’ familiar grand sense of adventure and loneliness is downplayed in favor of a smaller mission structure. Taking control of a space marine of the Galactic Federation, and equipped with a hulking mech, the story finds our unnamed hero taking on assignments to ensure peace within the galaxy. Federation Force’s roots definitely lay within the Metroid franchise, but its approach is far different from the series norm.

One of Federation Force’s most noticeable differences is its unique art style. Metroid is considered to be one of Nintendo’s few “mature” franchises, with a flushed and gritty art style to match. Federation Force, however, boasts a bright and vibrant chibi-style theme that would have felt unfitting in any other Metroid game. This different visual style comes across as somewhat of a mixed bag overall. While Federation Force’s distinct appearance looks fine on Nintendo 3DS, it ultimately contributes to a much different tone than past Metroid games have conveyed. The visuals suit Federation Force’s more approachable theme well, but serve as a constant reminder that this doesn’t always feel like classic Metroid.

Thankfully, Federation Force uses an easy control scheme that should feel familiar to Metroid Prime fans. Ditching the touch-heavy controls last seen in 2006’s Metroid Prime Hunters on the original DS, movement is done almost entirely using the 3DS’ circle pad. Shooting is as simple as tapping the A button for smaller shots and holding it for a charge shot, and like previous Metroid Prime games, enemies can be locked onto with the L button for tighter targeting in faster combat situations. Holding down the R button also enables gyroscopic aiming to help provide quicker, more precise shots on creatures and objects seen in your peripherals. This took a moment of adjustment to get the hang of, but after about ten minutes or so, slightly tilting the 3DS to line up a shot becomes second nature.

This general flow of movement and combat is where Federation Force most strongly resembles older Metroid games. Energy doors that open when shot, puzzles that involve finding the best path through danger, hidden diaries, and objects that strengthen the game’s lore are just a few of the familiar gameplay elements that you’ll experience across Federation Force’s missions. Combat encounters feel recognizable as well, with abilities such as sidestepping and stronger weaponry including missiles and other elemental blasts. Shootouts and mission progression are where Metroid purists will probably feel most comfortable.

Federation Force’s lack of an open-world is where it stumbles the most, though. Each of the game’s missions have a few clear-cut objectives to achieve through mostly-linear level designs, which works well for a smaller-scaled handheld game of this nature. However, in some ways, Federation Force goes against the series’ famous sense of exploration. Metroid games have always been about wandering off the beaten path in search of what adventures may lay elsewhere; Federation Force loses that encouragement in its isolated 10-15 minute missions. There are no hidden health tanks, no collectible move upgrades and ultimately little reason to revisit completed stages in search of new paths. I get it – Metroid Prime: Federation Force is trying to be its own unique entity. But as a series that’s known for its overwhelming encouragement to explore and backtrack, Federation Force just feels like it’s missing a piece of its soul. The game’s smaller nature feels right at home on a handheld where you can play for a few minutes at a time, but the loss of Federation Force’s greater sense of adventure fundamentally robs it of the greatness of past Metroid games.

Thankfully, Federation Force does come with a few local and online multiplayer options. Aside from the bonus of the entire campaign being playable in four-player co-op, the game also features a unique Blast Ball competitive mode. A variant of soccer, two teams of three players compete to shoot an oversized ball into the opposing team’s goal. This mode is a fun and frantic bonus that serves to offer a bit of variety when not in the campaign. However, the ability for players to lock-on to the ball lessens the experience by removing an element of skill. The few matches I competed in usually played out as all six players struggling to get the ball out of the center of the field due to so much continuous fire coming from both sides balancing the ball in the middle. This mode should keep you entertained for a few matches, but lacks the sort of strategy and precision that has given other soccer-based games like Rocket League so much appeal.

Federation Force also boasts a bevy of customization options for your hero’s mech. Mods can be equipped to your mech and grant bonus attributes such as increased missile damage or stronger defenses. More mods can be found within the game’s levels and with a limit of how many can be equipped at a time, there is an element of planning involved when deciding which power-ups best suit the mission at hand.

Paint jobs are also available to give your mech some extra flair. Like mods, these basic paint jobs can also be found hidden during missions, and it was fun to switch up my appearance once in a while. As an added bonus, Federation Force’s amiibo support also grants a few additional skins. Having used my Samus amiibo early on, I spent most of my playtime decked out to look like the series’ iconic bounty hunter. None of the skins that I encountered provided any sort of gameplay bonus, but they do serve as fun little ways to customize your experience.

Metroid Prime: Federation Force, while still serviceable, really just made me realize how much I miss the Metroid franchise. In some ways, it may even feel like I’m unfairly faulting Federation Force for not being familiar. After all, it still makes a respectable attempt at retaining some of the series’ themes while moving in new directions. But unfortunately, while the lifeblood of Metroid can still be felt in Federation Force’s veins, the overall experience still lacks the overarching sense of adventure, loneliness and exploration that makes the series so special. Metroid Prime: Federation Force is a good effort at creating a lighter and more bite-sized Metroid experience, but some of Metroid’s best elements have ultimately been lost along the way.

Metroid Prime: Federation Force succeeds at carving out its own identity, but loses a few elements in translation. It’s still Metroid at its core but lacks the masterful execution that the series is known for.

Gaming Trend's resident amiibo collector, Matt's a lifelong gamer with a soft spot for Nintendo. As a new father, Matt often struggles to stay as involved as he has been in years past but can always be counted on to come back for some engaging geeky conversations. A resident of Philadelphia, he is currently working on building up his Man Cave with all things Marvel, Star Wars, and Video Games. As an old-school gamer, Matt firmly stands by his belief that gameplay will always be more appealing than story.
Related Articles: Metroid Prime: Federation Force
Share
Tweet
Share
Submit