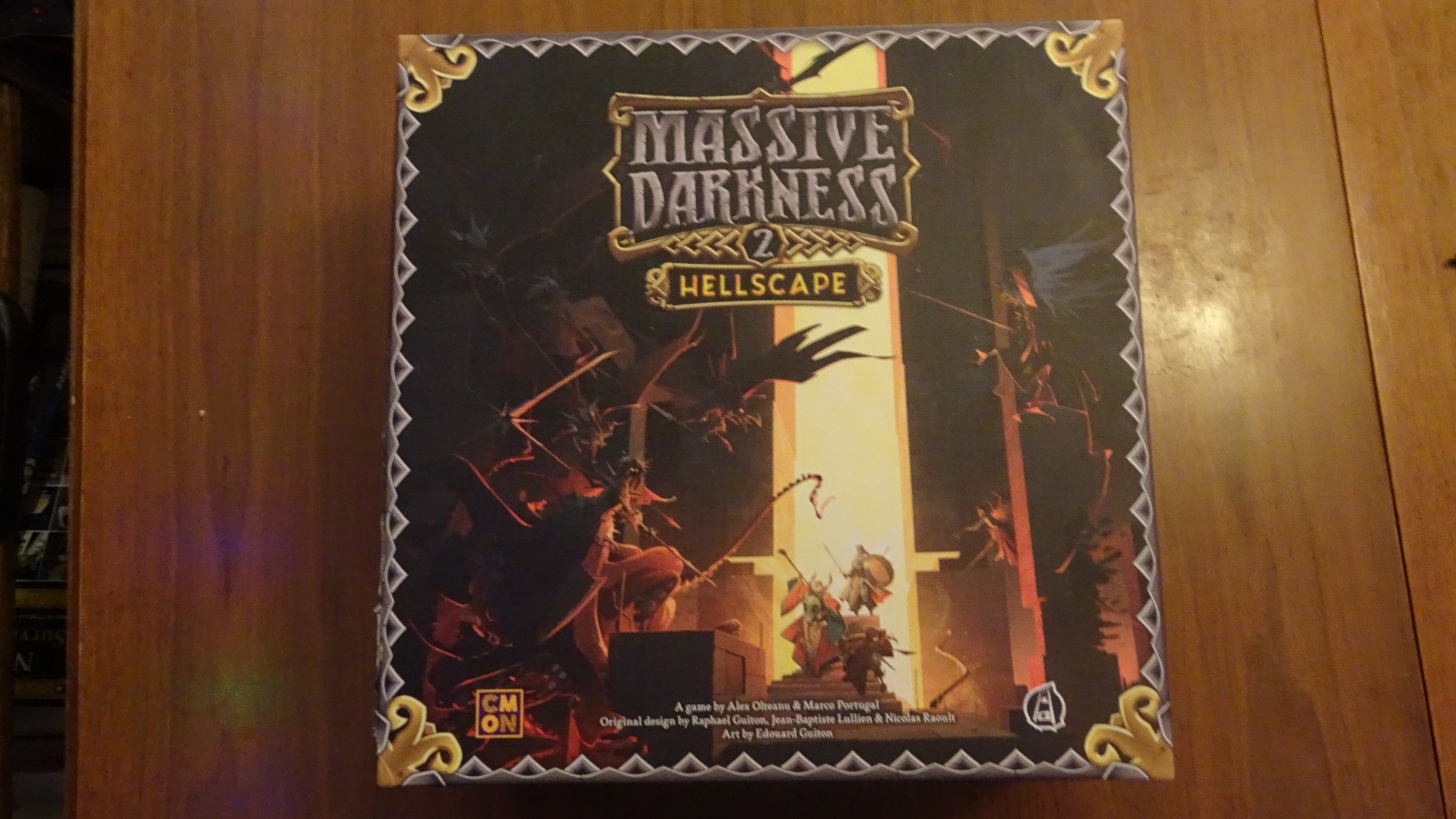 Massive Darkness 2 is a co-op dungeon crawler for 1 to 6 players.  Players pick from different classes of ‘Lightbringers’ that head into hell to defeat the various demons threatening humanity.  Starting at level one, and barely equipped for the job, players will find more gear, learn new skills and slowly become more powerful against the waves of enemies spawning against them.  As they battle through the hordes, they accomplish objectives ranging from stopping monsters, opening gates, and killing bosses.

From the beginning, there is a lot in the box, and a lot of content to sort through.  The box is massive, with three trays of different units, hundreds of cards, different skill boards, play dashboards, enemy cards, and different levels of weapons and skills. There is just a lot here.  Jumping into it is a little intimidating, as there is so much stuff to sort through. 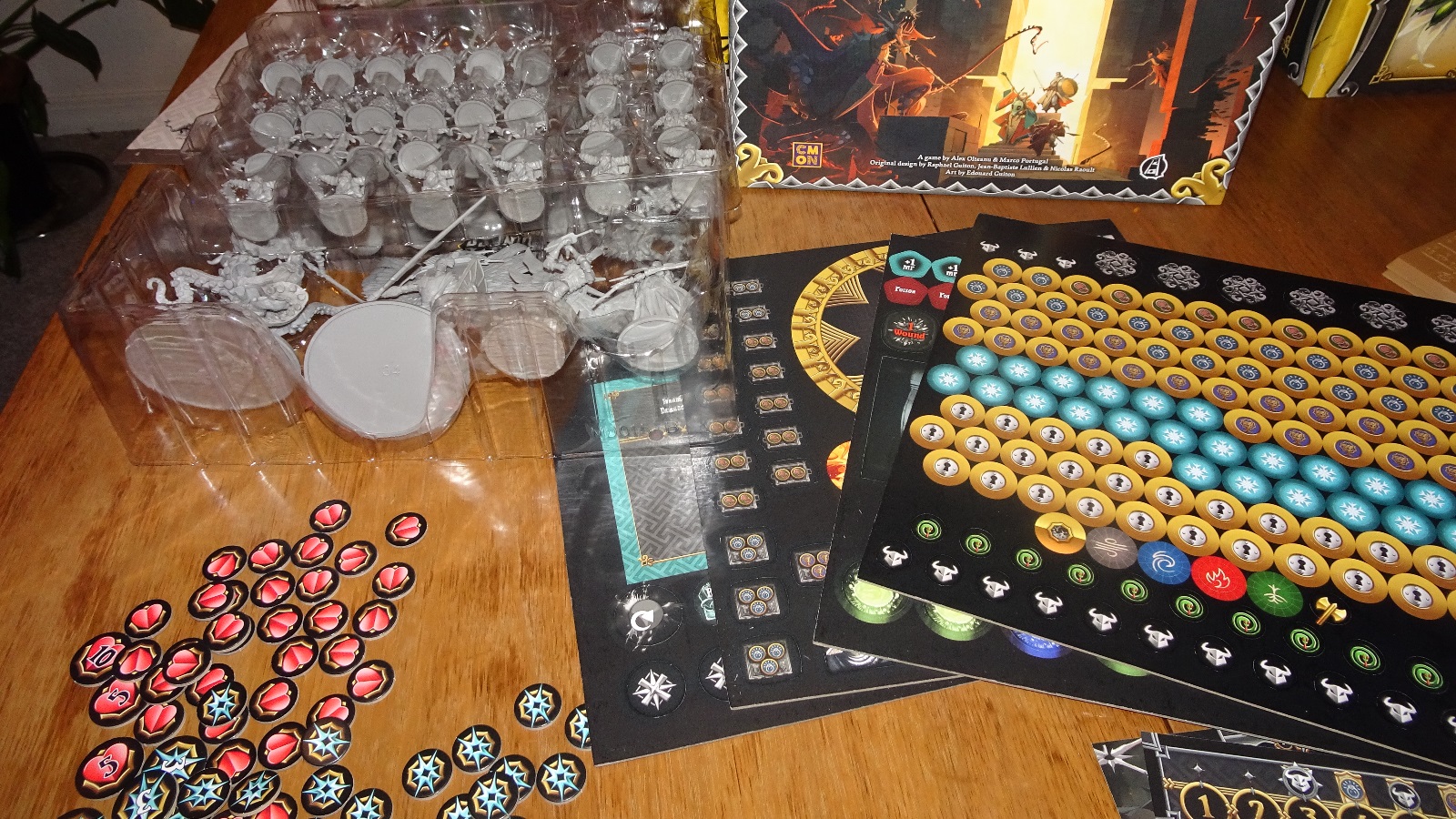 Even when you figure out what goes where, the setup of any map takes at least a half an hour from cracking the box open before anyone is ready to play.  This is one of the negatives of the experience, because as fun as the game is, the cleanup and especially the setup takes a lot of time.  To illustrate an example of what needs to be tracked the gear comes in multiple levels, ‘starting’, ‘common’, ‘rare’, and ‘epic’, but there are also monster weapons you can use, which come in three equivalent levels as well.  So just for the gear, you are going to be looking at seven piles of cards.

Massive Darkness 2 has a lot going on, as the creators of the game sought to bring the computer dungeon crawler experience to the tabletop.  Managing things such as damage ranges, experience, random loot, and class skills results in quite a bit to try to have players track, short of making them manage their own Excel spreadsheets.  However, this game cleverly organizes a lot of this information into cards players keep track of and the player dashboards, which are well designed. 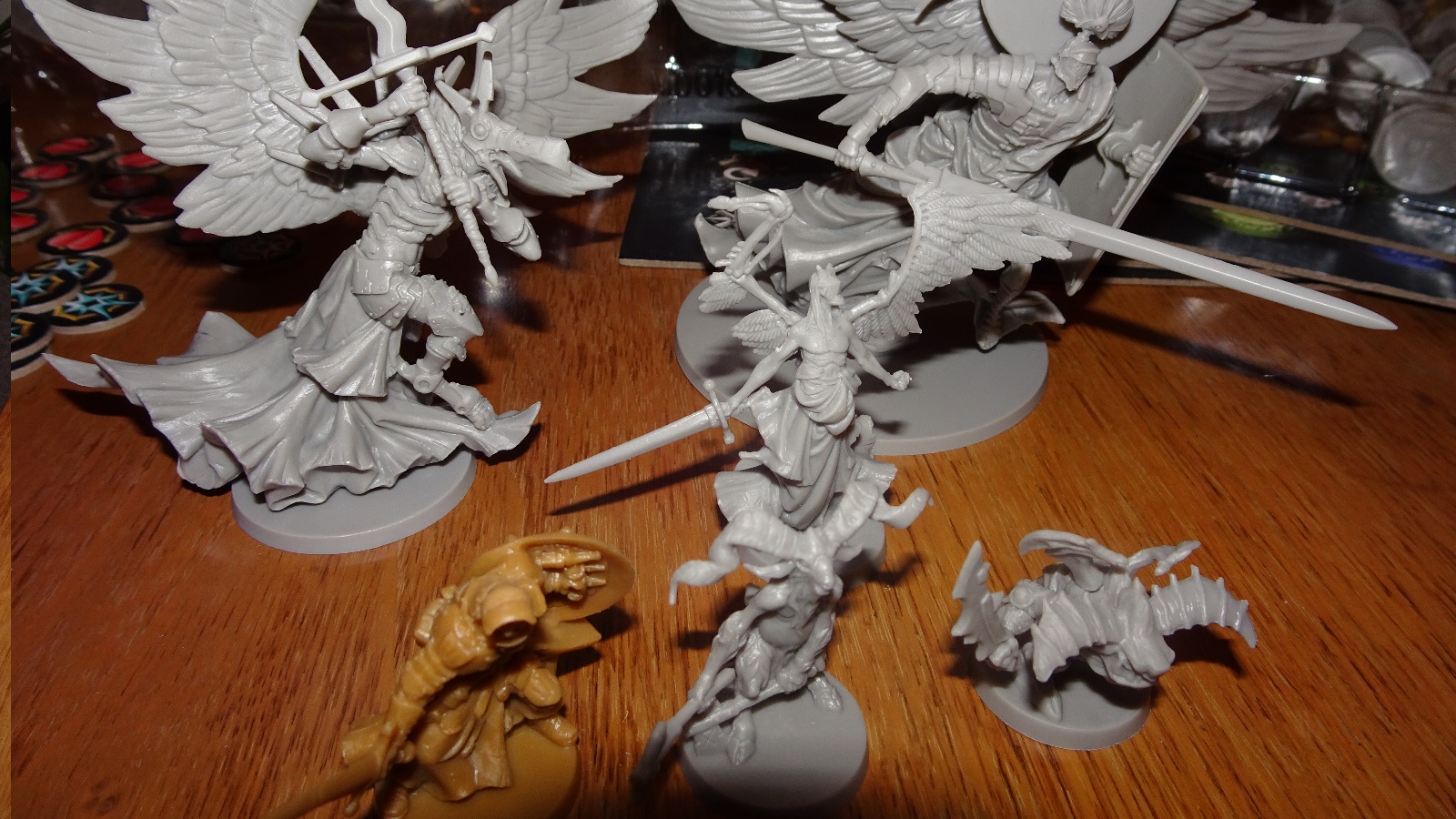 The dashboards are familiar to those who have played some other CMON games like ‘Zombicide,’ which uses pegs to track level and experience, while having designated slots for equipment like hands, armor, helmet and so on.  The brown of the dashboards is an off-putting color, but they work very well overall. There is an  inlaid depression to hold the cards and a raised edge to easily take the cards back out. These are nice small touches as well as an easy way to track relevant stats.

After setting up the map and giving everyone their character, the game begins. Once the basic rules are understood, the process is pretty easy.  Players get three actions, these are your typical move, attack, interact; after which the monsters go with two actions.  This turn structure rotates around with the occasional spawning of new monsters.  Generally progress is slow, players fight against hordes of enemies until they get better gear and skills and then can use them to accomplish their goals.

The game keeps things fresh even on the same map through the way random stuff is spawned.  When a character goes into a new room, a deck of ‘door’ cards appears that can do anything from spawning additional monsters, turning it into a treasure room, or adding traps.  When monsters are spawned, they are drawn from a random deck.  Additionally, monsters are also given a random monster weapon, which changes their attack pattern. 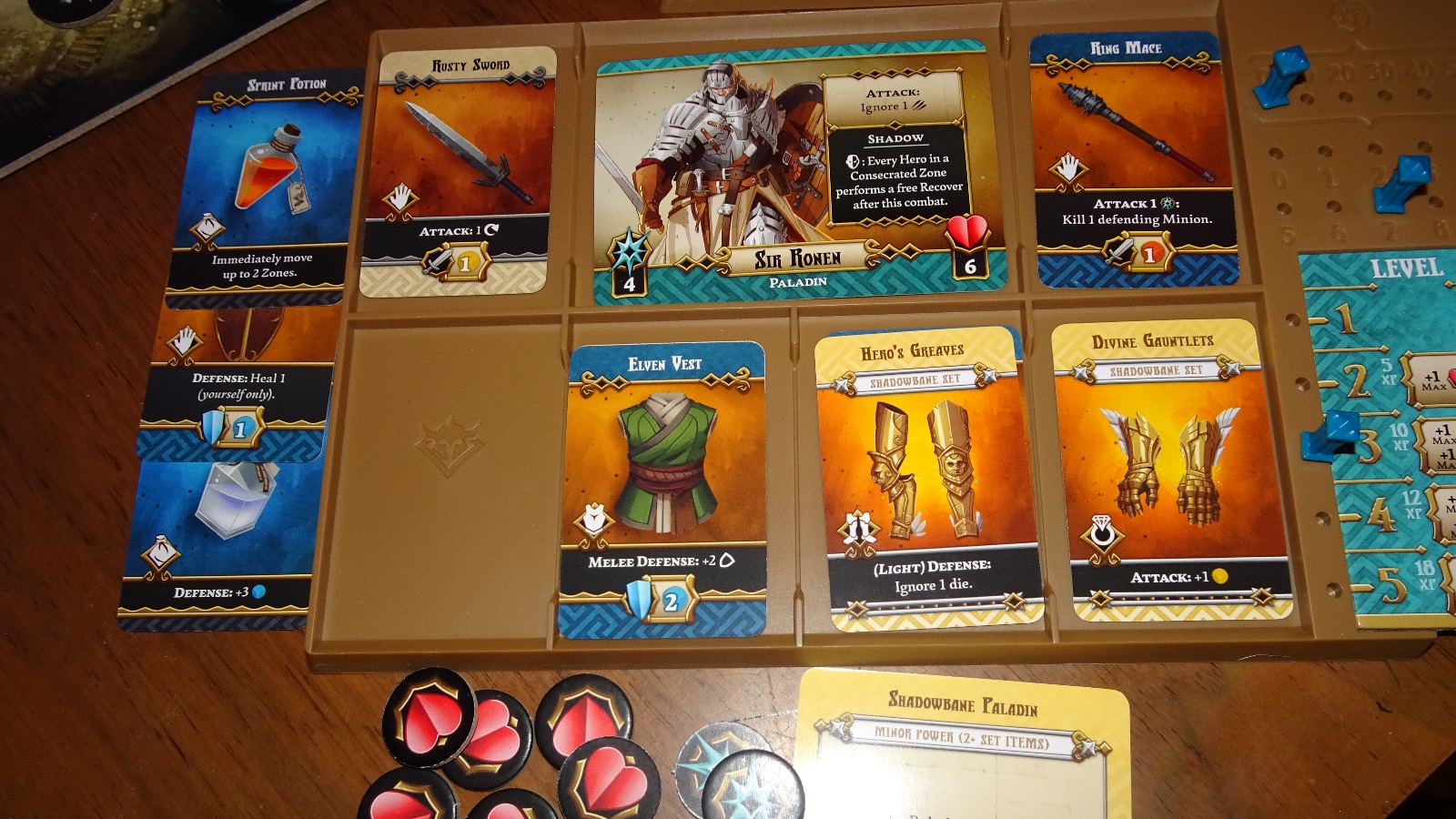 Players fight by assembling a dice pool based on their gear, any abilities, any monster abilities and some monster dice that represent counter attacks.  These dice track how much damage is done, how much defense happens, and how many auto-hits from the monster applies.  Characters often have a few rerolls to mitigate a truly bad dice roll.  Once all the damage is done, hits are applied, and monsters are slain, the players are gifted with valuable experience and gear.

The gear system is pretty rewarding in how it is done and is a highlight to the experience.  There is a bag building element to the experience, as the treasure bag starts with a majority of ‘common’ tokens and a few ‘rare’ tokens.  As the game progresses, these are modified into higher tiers of tokens.  Whenever a player kills a monster or finds a treasure, they draw from the bag and then take the appropriate level card of gear.  It is a great source of progression, as during the beginning players are desperate for any common gear just to have something in their slot.  Late game players are picky, waiting for the right epic gear to complete their character.  One notable thing is they even included the concept of ‘set’ items, where if players find a few pieces of the named set item, it gives special bonuses. This was a great throwback to computer RPG games and the addictive nature of trying to find all the set items.

One of the best parts of this game is the way classes play differently.  Unlike say some of the more popular dungeon crawlers out there there might be ‘different’ classes in theory, they all largely play exactly the same with some slightly different stats; here they have wildly different play styles.  Each character has their own unique dashboards or mechanisms they use.  The rogue has an actual ‘bag of tricks’ players will draw from, the Paladin consecrates zones for bonuses, the barbarian takes their damage and turns it around to activate special moves, and so on. 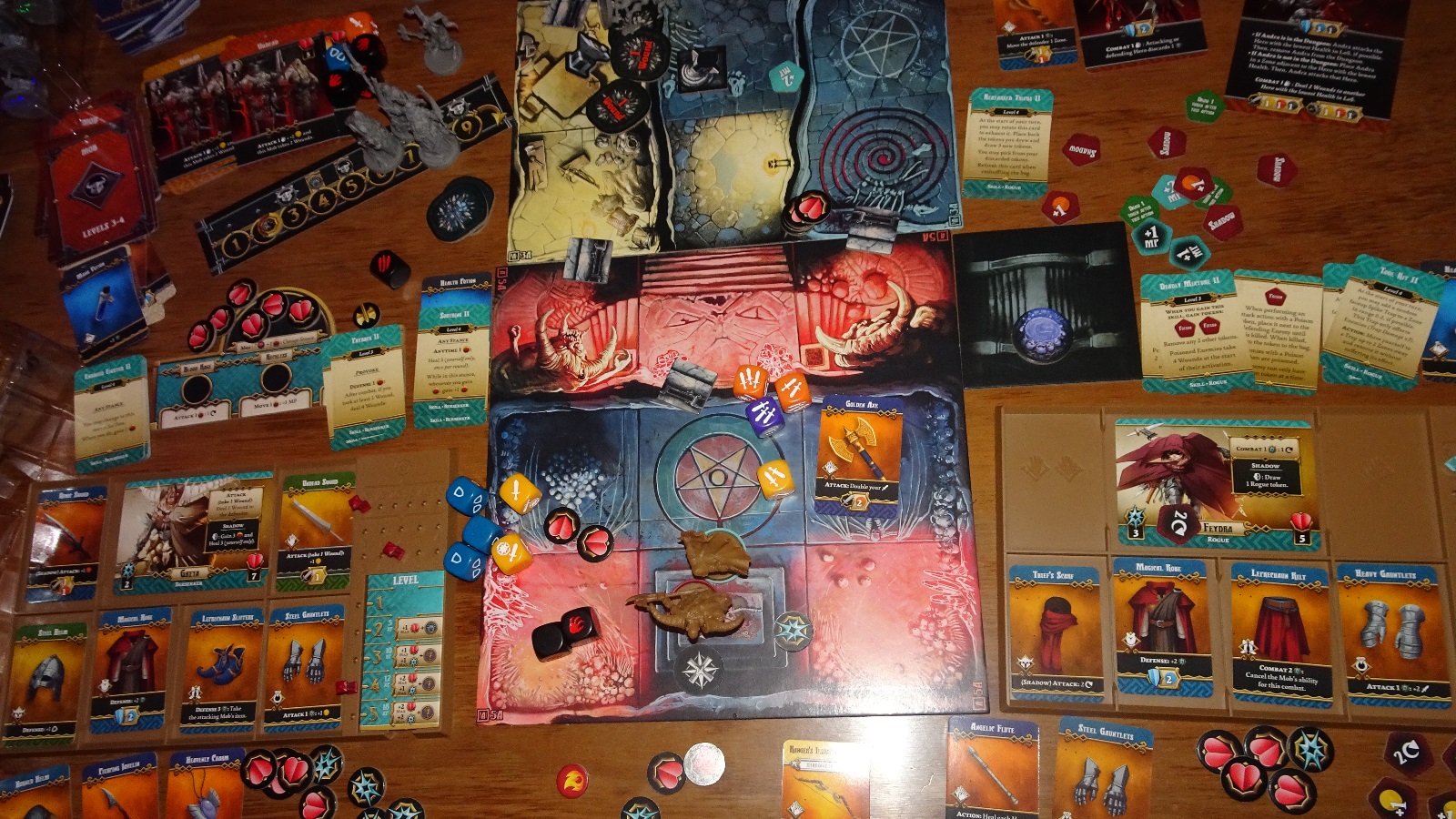 This fact alone helps raise the game above a lot of other similar games in the genre.  What makes it even more fun is that even within the class, there are different builds to experiment with.  One of the more interesting aspects of this system is how many varied and viable ‘builds’ there are.  For example, there seems like an obvious route for each class, like the paladin stacks out their combat aura, or the barbarian does the same to their fighting ability.  Yet with the way equipment is random, and what skills players pick, characters can end up completely different with some fun skills.

Adventurous gamers will find some new combos that work surprisingly well together, even if the skills at first might seem lame.  As an example, the barbarian has a skill that gives damage back to anyone who attacks him, and another skill that heals himself, so suddenly instead of the safe combat path, the barbarian can be made into a type of ‘thorns aura’ character that does more damage by being attacked, returning that damage and healing themselves along the way.  It is a fun thing to discover weird builds like this, where your character is doing more damage being attacked than attacking himself.

Overall, there is a lot to recommend here.  The only real negatives are the brutal set up times, and the game being a bit of a table hog.  One of the other small knocks against it is in the late game, heroes often out-scale monsters, so the final part is just stomping through monsters. It becomes tempting to just hand wave a victory as the tension goes away.  With these stated though, the rest of the package is really enjoyable and a fun time.  It really leaves players hungry to try the multitude of expansions available for the game as well.

Minus a few issues of lengths, setup and so on, there is a lot to recommend here. The equipment system gives a fun simulation of loot from video games, and the class system is pretty impressive in how different each character feels. Experimenting with different builds gives a lot of replayability especially within each wildly different class. While the end of the games drag a little, the overall package gives hours of fun each time it hits the table.