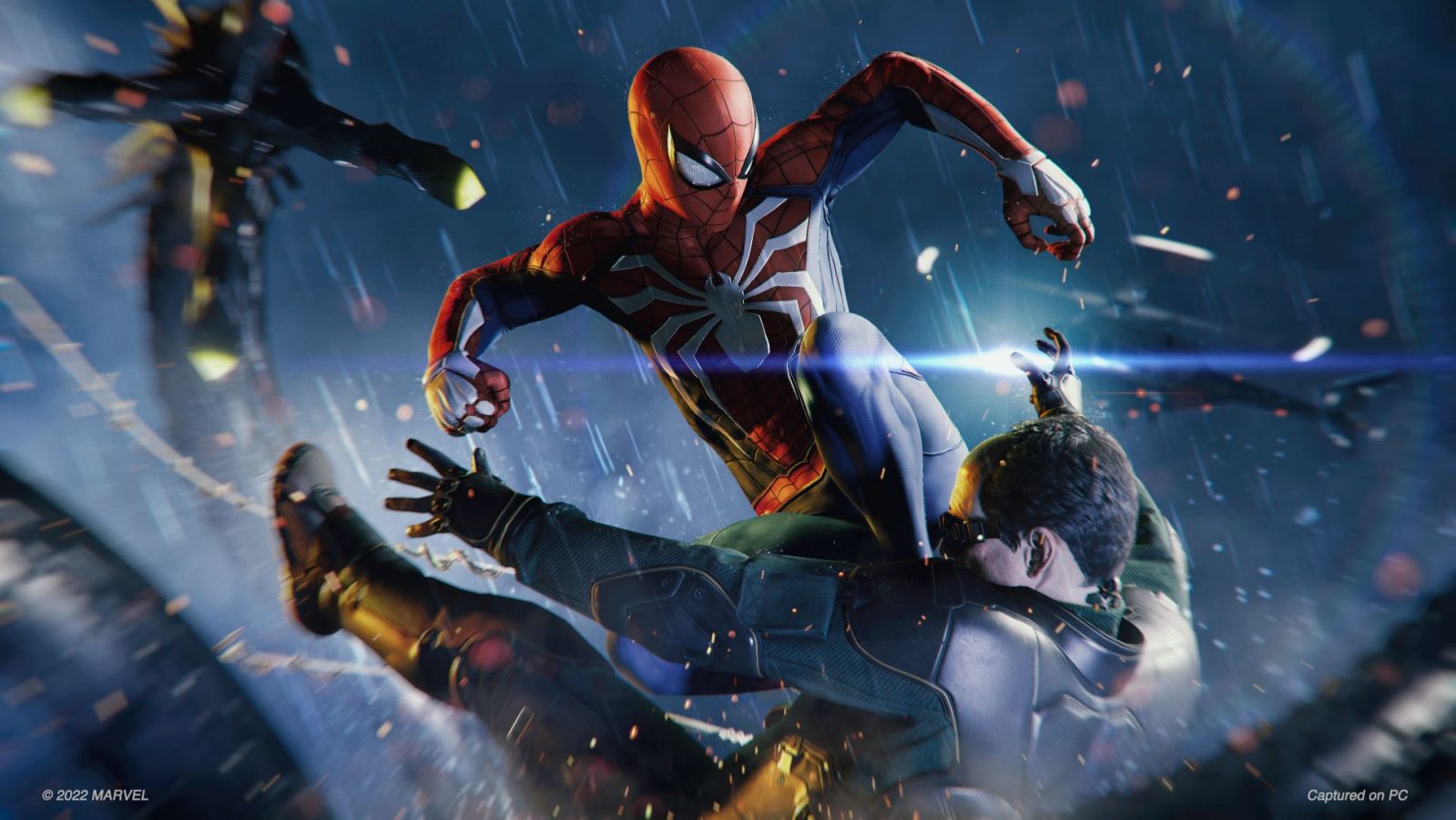 Everybody loves Spider-Man. It’s not a hidden thing, with No Way Home bringing everyone back to theaters in droves to collect over a billion dollars in only five years time. On the video game side, it’s impressive to see the current series sell over 33 million copies on PS4 and PS5, when you include the phenomenal Miles Morales standalone expansion. The brand has never been hotter than it is now, and for good reason; we’re getting quality content. One of those pieces of quality content is the original Marvel’s Spider-Man, one of the best Spider-Man games to hit the market since Spider-Man 2 on the PS2. It’s amazing (as you can see in our review on PlayStation 4), and with a remaster already hitting the PlayStation 5 (that review here) alongside Miles Morales, Sony surprised everyone with the announcement it was also headed to PC. We’ve gotten our hands on it, and I’m happy to see the teams at Insomniac and Nixxes (Sony’s new PC studio) have put the same care into this port that we saw in the PS5 version.

You already know this is a fantastic video game by now, but some may need a refresher. Marvel’s Spider-Man follows an older Peter Parker, having been on the friendly neighborhood hero job for eight years at this point. He’s still making the same Parker missteps, letting the life of a webslinger come between him and a normal life, but he’s still pushing forward. Along the way you’re going to face a full rogues gallery of villains, with Doc Ock, Vulture, and Scorpion among the recognizable faces. The story is a fantastic original piece (as well as the three DLC’s, all of which are included), and when paired with the incredibly designed gameplay, featuring web swinging that is satisfying for hours, a fun combat and gear system, and tons of side activities, it makes one of the best superhero games you’ve ever played. It’s truly remarkable, and another feather in the cap of Insomniac Games.

What you’ve come here to see is how Marvel’s Spider-Man functions on PC, and there are some great results to be had. I’m running an RTX 3080 GPU, along with an I9-10900F CPU and 32 gbs of RAM, coupled of course with an SSD. I want to play to the highest degree, and even with this PC being about a year and a half old, it generally shrugs at even the toughest games. Marvel’s Spider-Man is a remaster, with the original launch being five years old at this point, so you might think it’ll be plug and play. While it can be, Insomniac and Nixxes have worked to add so much under the hood that even the best PCs might bend a bit under the weight of what’s possible.

Starting with the graphical settings, you have quite a few ways to go. There are very low, low, medium, high, and very high presets. Ray tracing is available as a separate option to enable, with medium, high, and very high settings. All of these have different sliders you can customize, changing up the intensity of things like shadows, hair quality, depth of field… all the things the “PC master race” loves to fiddle with. The good news is you’ll be able to scale everything to your specific hardware, which means more people will be able to enjoy the webhead’s journey.

As for how well it works, I’m really pleased with the results. Marvel’s Spider-Man was already an extraordinarily well built game, and they only raised the bar with the PS5 version. With all the extra bells and whistles available, both in hardware and additional settings, the PC version manages to hit some impressive heights. Here is some of what I’ve found in terms of frame rate (frames per second, or fps), since most of you are here for that: 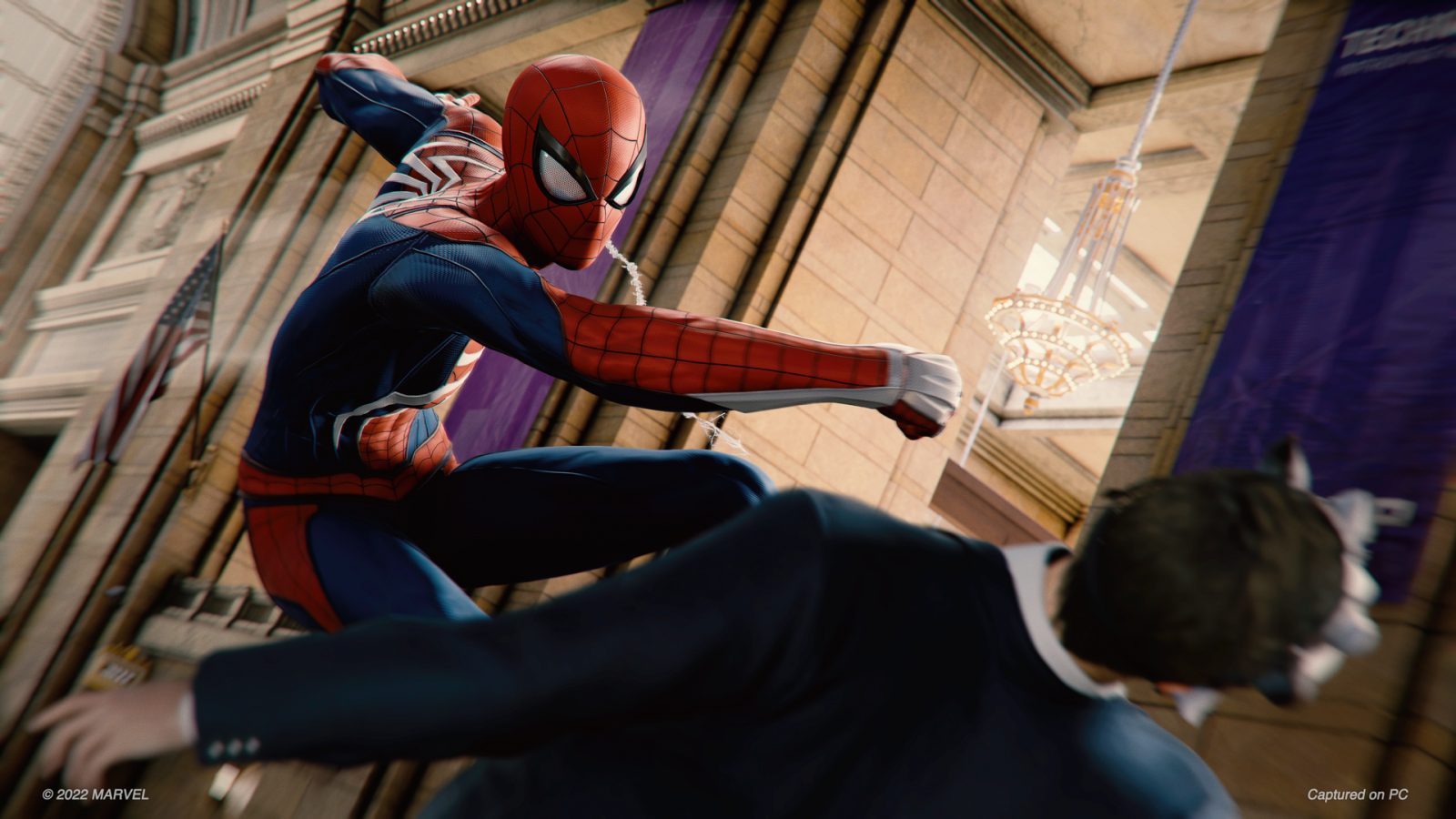 The biggest expense I noticed, and it’s not a shock to anyone, was ray tracing. Here’s the thing– pretty reflections are going to be expensive, as the game is attempting to render more or less another game inside the mirrors of your environment. When turning off ray tracing, I was able to get a dramatic bump, sometimes as high as 20 additional FPS. In fact, on Very High graphical settings, just moving ray tracing down to medium gave me a similar boost. That being said, what Insomniac accomplished in Marvel’s Spider-Man a’ la ray tracing is gorgeous, and you owe it to yourself to give up a few frames in order to see what’s possible. Some additional good news; as all the cutscenes are rendered in-engine, you won’t run into any of the weird 30 FPS movies that often ruin remasters. They upscale like the game, generally closer to the enclosed mission frame rate.

One thing I was a bit surprised with, the variance in the frames. They weren’t always that steady, becoming erratic during more intense sequences. That could be because I was pushing for the highest fps possible, but it’s something to keep in mind, given there isn’t a locked option. I’m curious as to if that also led to a few stutters I encountered in the gameplay. I was certainly pushing the game to fail, and to its credit I didn’t see that happen but a few times, but there is something to say about console stability. The PS5 is a boss, and handles the remaster cleaner, but with fewer extra benefits you get on PC like enhanced graphical fidelity, the higher frame rates, and greater visuals in ray tracing. 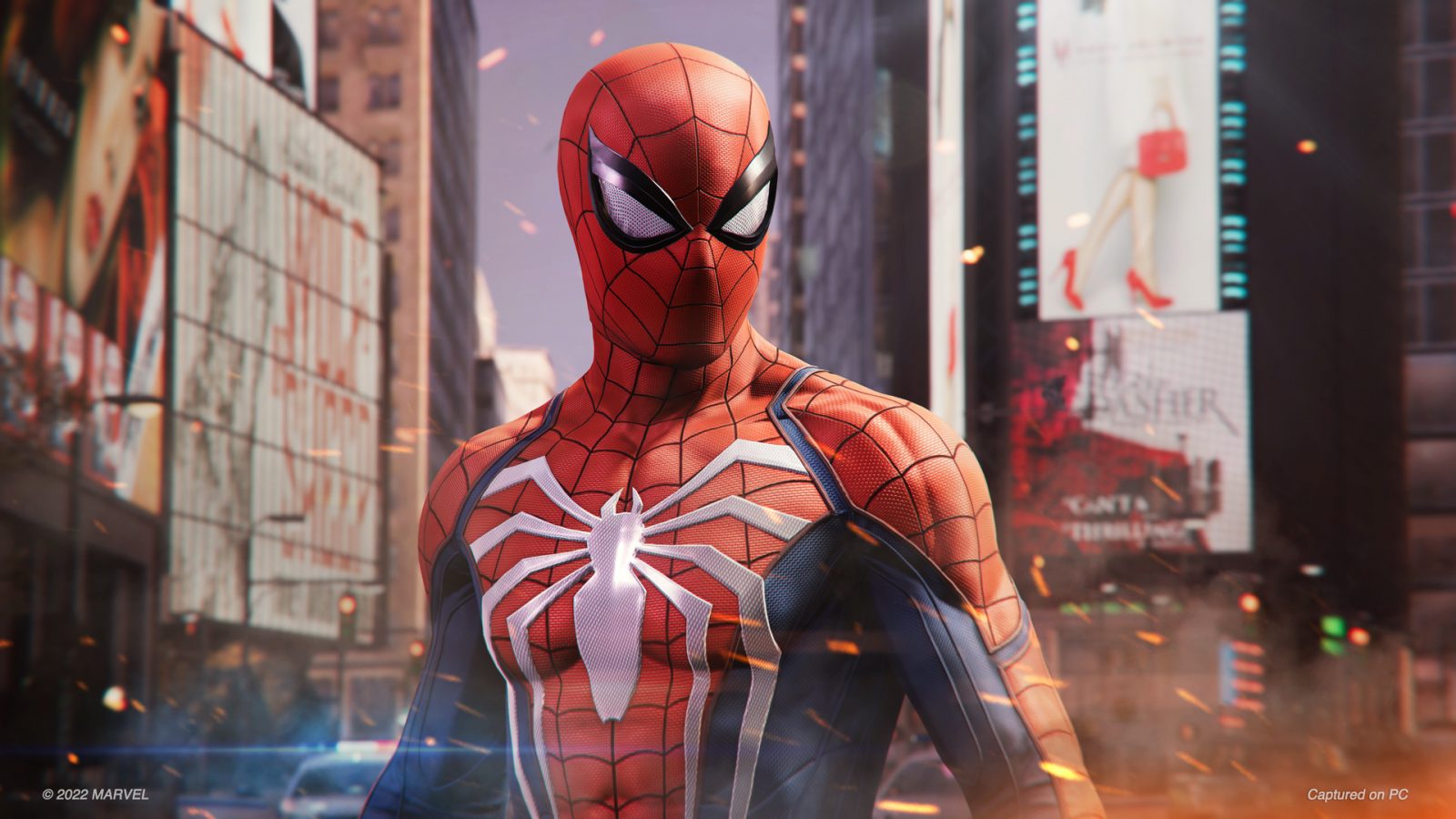 These numbers are all based on my computer, but also on a 2K (1440p) monitor, which I’m sure factors in. I’d have to test it, but assuredly you’d get a nice boost in fps just moving down to 1080p. As the chart shows above, Marvel’s Spider-Man advertises 4K/60fps on rigs like mine, and while I’m close, that only counts in horseshoes and hand grenades. I’m off just slightly in the CPU department, but that also means the recommended specs should be pretty spot on. That’s excellent news, because the minimum specs are quite low, allowing most to be able to thwip around New York City. My editor-in-chief did take everything on a ride via his RTX 3090 and 4K monitor on max settings, and he managed to hit 111 fps maximum, with 88 fps on average in the open world. In the enclosed areas, he was at 127 fps maximum, with 102 fps average (and 130 fps when in the air vents!).

Something PC has the added benefit of, NVIDIA’s DLSS. While I didn’t see DLSS directly impacting the frame rate however, something I’m used to seeing, I did see it show up with the resolution. Turning DLSS off or moving to Insomniac’s Temporal Injection tech shows a big dip in visual quality, so while you may be disappointed in less “free frames” as we like to say around here, the resolution upgrade is certainly worth taking advantage of. Insomniac’s Temporal Injection tech still works well as a DLSS substitute though, helping keep your frames steady and certainly providing better visual quality compared to having nothing running in the background.

Playing with a mouse and keyboard isn’t that awkward, and if you’re more used to it than me, you’ll probably be doing all kinds of crazy tricks in this one. The Dualsense is also available (although you have to run it wired for effects), and while the haptics are fantastic, the triggers are still nothing too crazy. The web swing tension is a neat effect, but not anything that you’re missing out on if you don’t have one. If you prefer to use an Xbox controller, there are even prompts for that funny enough, although the quick time prompt colors still retain Sony’s color scheme for each specific button.

If you’re all about messing around with Twitter while you wait for the game to load, don’t pick up Marvel’s Spider-Man Remastered for PC. Loading times are near-instant, with my SSD loading everything in like a dream, even on high settings. It also took only four seconds to load my game from hitting the continue button, proving yet again everything is better with SSDs. This is running off my standard Samsung SSD as well, not an M.2 drive, so everything has been wonderfully optimized by the Insomniac and Nixxes teams. Once again, our editor-in-chief came in clutch and checked out the M.2 speeds for you, and on his Samsung 980 Pro he saw the SSD speeds halved, down to 1.5 to 2 seconds.

Lastly, let’s talk about the Steam Deck. I’ve had the pleasure of having one almost since launch, and when I saw the news that the game would be on the verified list out the gate, I had to try it. After a little bit of time with it, Marvel’s Spider-Man proves to run well, just not as well as you might hope, at least when it comes to frame rate. Even for a five year old game, the fps sticks around 30 on medium, and that frame rate jumps around quite a bit. Moving the settings down to very low doesn’t make it much more consistent either, meaning it’s better to just stick with the better graphical fidelity. While I wouldn’t be surprised if the team doesn’t figure out how to get something closer to 60fps out of it, at launch it’s simply passable when it comes to frame rate.

That being said, the game performs very well on the Steam Deck. I didn’t experience many dips below 30fps, and the controls are extremely comfortable in portable form. Taking Spidey on the go is a privilege that is completely worth a lower frame rate, and given the limitations of the hardware, it’s impressive it runs as well as it does.

Marvel’s Spider-Man Remastered is one of the best superhero games of its generation, and the move to PC gives it an arsenal of new settings to play with. While the frame rate can fluctuate a bit, the fact that it hits the marks advertised and even exceeds them is good news for everyone that owns a computer and is worried they might fall short. Ray tracing is a dream, and while expensive shows the prowess of Insomniac and Nixxes. Even better, this game is available on the go, Steam Deck ready at launch. Just being obtainable would be enough for most, but the above and beyond approach taken in this project is one Peter Parker himself would look at and smile.

David Burdette is a gamer/writer/content creator from TN and Lead Editor for Gaming Trend. He loves Playstation, Star Wars, Marvel, and many other fandoms. He also plays way too much Call Of Duty. You can chat with him on Twitter @SplitEnd89.
Related Articles: Marvel’s Spider-Man Remastered
Share
Tweet
Share
Submit