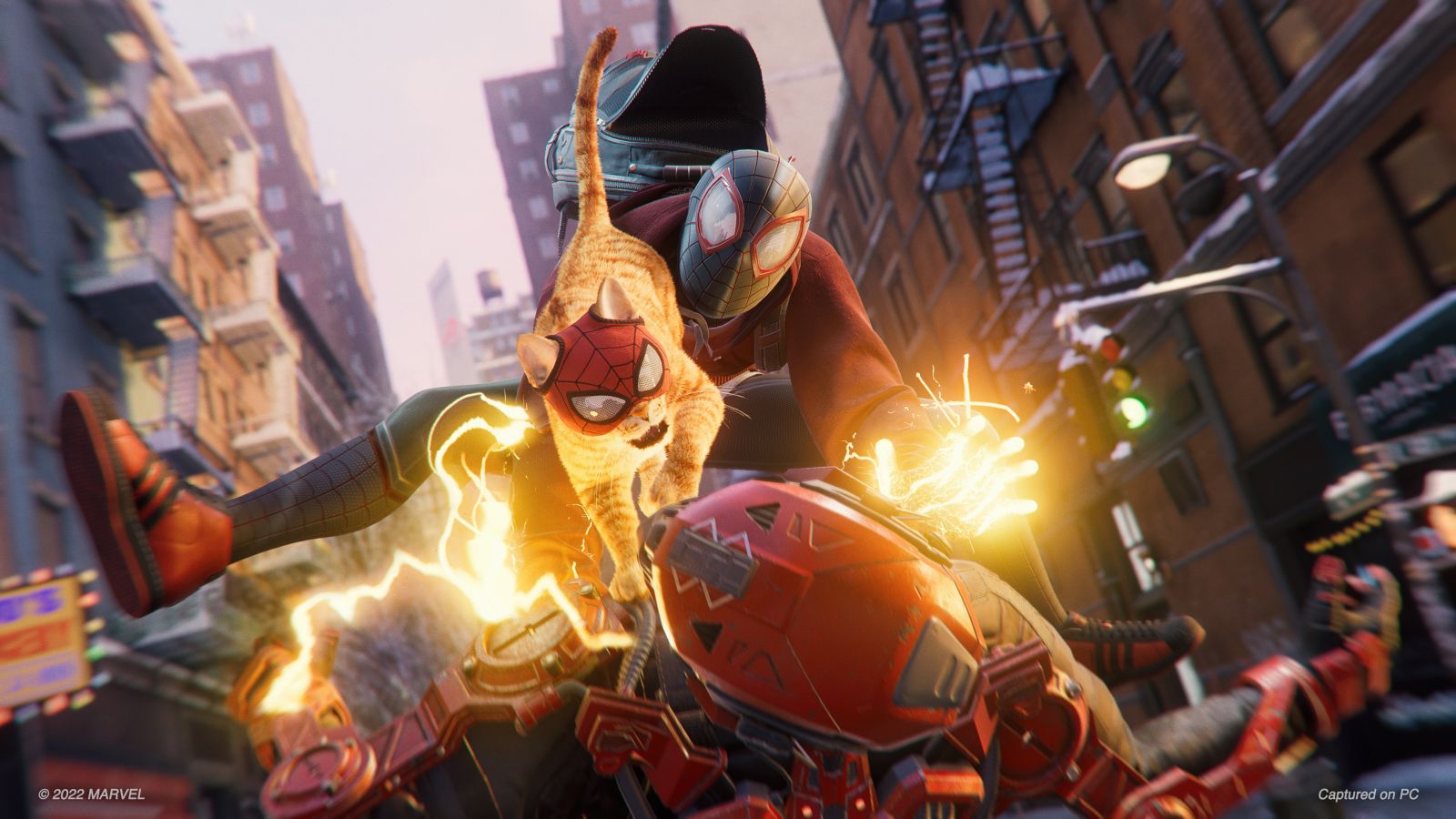 Into The Spider-Verse is one of my favorite Spider-Man movies. I love them all honestly (yes, even the horrific campiness of Spider-Man 3), but that one struck a chord with me. Obviously we all can’t wait for the sequel, but when PlayStation announced a Miles Morales spin-off coming to PlayStation 5 at launch, it was a must-buy for me. Now here we are, two years after that release, and a whole new platform of webheads now have a chance to play it. You’ve heard Ron say it’s one of the best Spider-Man games in his review, and now you have a chance to hear me reiterate just how good it is again, just this time on PC.

To start off, this coming of age story brings you back to the beginnings of a Spider-Man. In Marvel’s Spider-Man we had the opportunity to get a different view, with Peter Parker being eight years older and on the job for a while. Now as Miles, you’re not necessarily fresh to web slinging, but you are new to just what is possible with spider-powers. This shows in the bumbling fashion in which Miles screws up a prison transfer in the opening sequence, but he more than makes up for it in discovering abilities even Peter finds surprising.

This makes way for an absolutely phenomenal adventure with Miles through his winter break in New York as Peter leaves with MJ for work and his own little vacation. It’s also a Christmas tale, which makes it all the more endearing to me. Each moment you spend with Miles, his mom, and his friends is touching. Even some of the different encounters with villains have the undertones of sympathy, and while we found that in Marvel’s Spider-Man as well, it works especially well with the Christmas-time background. Insomniac is building an incredible universe right now with fully developed characters on both sides of the coin, and it’s all outstanding.

I can sit here and talk about how well Miles Morales builds off of the original, how fantastic the story is, or just how much fun it is to swing around the city, but performance is going to be the crux of this one on PC. Whether or not you like it, if a PC player has the rig, they want to flaunt it, and they want games to do it with. Not every moment of Miles Morales is 4K/60fps/ray tracing to the max, but for as good as it looks on console, there’s an equal shot for it to look as good or better on PC.

The good news is that Marvel’s Spider-Man: Miles Morales has a ton of options for you, no matter what PC you own. As you’ll see in the graph below, Miles Morales will work on pretty basic rigs with an NVIDIA GTX 950, Intel I3-4160, and 8gbs of RAM. That won’t get you all the bells and whistles that come with this game, but you’ll still be able to play it. If you’re already used to that level of fidelity, you aren’t probably going to care either. 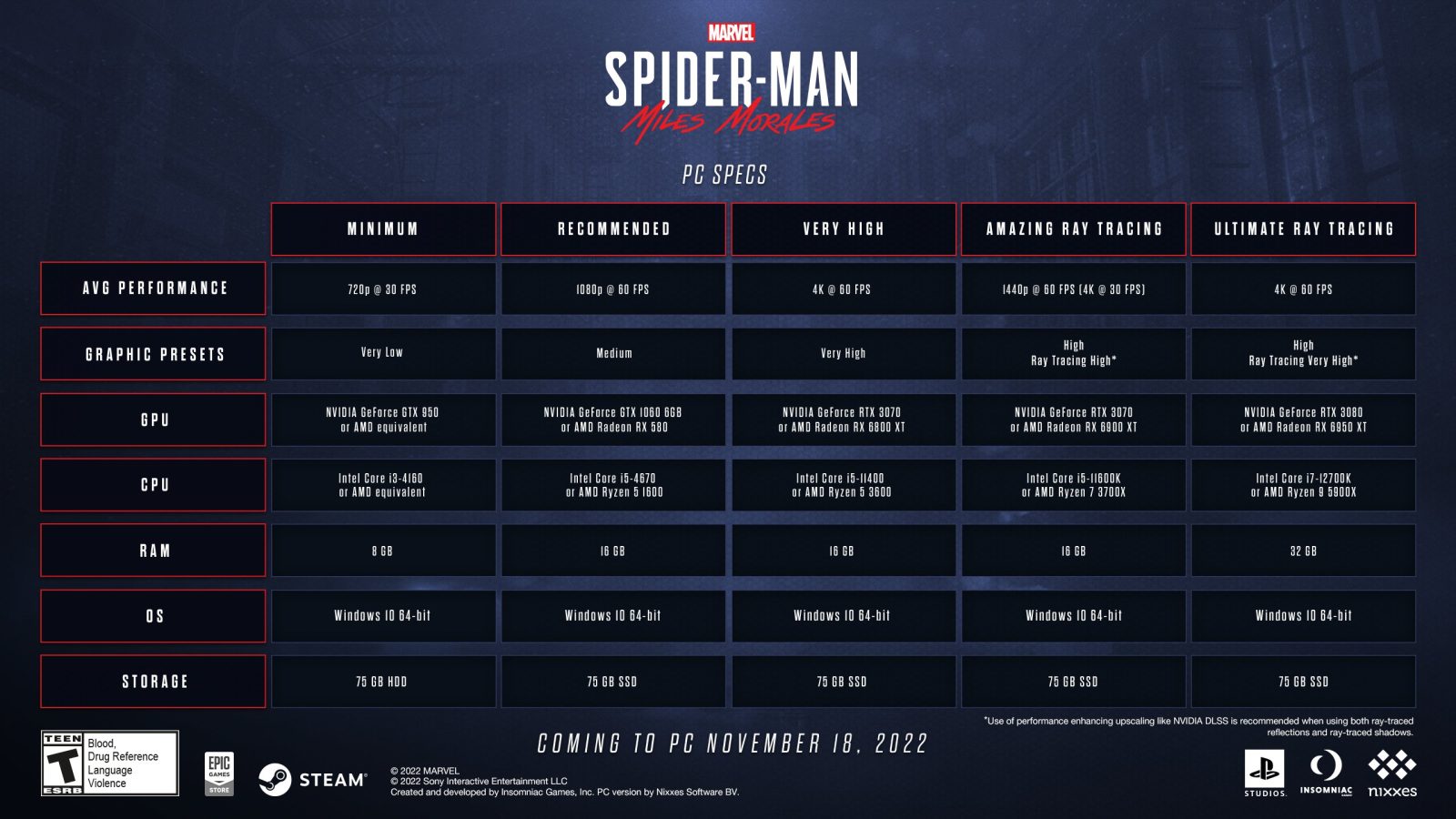 The PC master race crowd is going to want a lot, and Miles Morales can provide that. I myself am running an RTX 3080, I9-10900F, and 32gbs of RAM, so I know I want all the things. In our previous review of Marvel’s Spider-Man Remastered for PC (which you can find here), we learned that it stuck largely to 50fps-60fps in the open world if everything was turned up to eleven, with a jump in performance during enclosed missions. From what I’ve played of Miles Morales, that mostly holds true, with a few caveats to discuss below. If I turned everything as low as possible, with ray tracing off, the frame rate skyrocketed over 100fps. Depending on the graphic presets you choose, you’re going to gain or lose about five to ten frames on average, which isn’t too terrible. I just wish the frame rate was a bit more consistent, with it jumping around quite a bit as I soared through the world or battled a group of thugs.

Since we’re on the very diverse topic of PC settings, our Editor-In-Chief Ron Burke tackled Miles Morales on a heck of a rig. The internals also boasts an NVIDIA RTX 4090, and he’s got video below so you can see exactly what it can do. He also does a great job of being informative with the settings, including how well the game functions utilizing the new DLSS 3.

Ray tracing is certainly a beautiful thing, but hear me out. It’s also the biggest enemy to your PC’s performance. If you didn’t know, ray tracing is a thief, stealing away tons of processing from your computer to render all those pretty lights and shadows. I was able to crater my frame rate in Miles Morales by turning up all my settings to high, enabling ray tracing, then turning all of those settings up to high. The graph does say 4K/60fps with high ray tracing given my PC specs, but I don’t believe that includes turning up the shadows like I did. I don’t think it made a big difference either, so I’d avoid changing that setting altogether. The cost in the end is usually around twelve to twenty frames to get all of the traced rays you’d like, so you have to decide what’s worth it to you.

With that in mind, I think ray tracing in this game is worth the lower frame rate. Miles Morales is absolutely stunning. Lowering your graphical settings and getting rid of ray tracing can dull the glow it has. I tried quite a few different combinations, and the best I came up with was running High graphical settings, along with ray tracing on at its default settings, with shadows on Medium. Cutscenes shine all the more when you have ray tracing on, especially at night when all the Christmas decor is gleaming.

Settings that you need to look at to glean a couple of extra frames are traffic density and crowd density. This affects how lived in the city appears to you, with the options of more or less cars and people inhabiting the streets. Personally, I’d drop it as low as you can. It doesn’t hinder the experience, and it gives you a minor boost. In the end, unless you’re like me, staring at numbers and counters while you play, you probably won’t notice these differences. The game plays extremely well on PC whatever recommended setting you go with.

While I don’t prefer it over a controller, I can at least say that mouse and keyboard is a decent option for Miles Morales. I didn’t even bother touching it when reviewing Marvel’s Spider-Man Remastered (mainly because I forgot), but I switched over in the middle of an infiltration mission to see how it would go. It didn’t go as well as I’d hoped; I forgot what button to hit and accidentally alerted all the bad guys to my presence, but it wasn’t as hard as I thought it would be to fight back, even without a great knowledge of the keys. If you don’t have a controller, you’re not out of luck, but I do think you’d be better off with one. A DualSense is nice to have, but not required, as the haptics are nice but the adaptive triggers are still nothing to write home about. You can use any controller, as I did using the Xbox Elite Series 2.

To finish things off, there are a plethora of accessibility options available in Marvel’s Spider-Man: Miles Morales. I’ve seen some options before in other games, like the recent God of War Ragnarok, but the amount here is massive. Everything from changing certain button interactions, like QTEs auto-completing, to adding high contrast shaders to denote different characters for the visually impaired, are wonderful to see. I know many of these options probably just made their way over from Marvel’s Spider-Man Remastered, but it’s great to see companies continue to make games more accessible.

Marvel’s Spider-Man: Miles Morales is a triumph of a game, and now even more people can experience it. That experience may not be as stable as on PlayStation 5 given the diversity of hardware, however there’s also a lot more under the hood than you’d get on a console. With all of that in tow, including gorgeous ray tracing and a glut of accessibility options, it’s like Miles getting Venom abilities: more power to an already powerful entity. Just like Marvel’s Spider-Man Remastered before it, Miles Morales makes the leap and sticks to the wall.

David Burdette is a gamer/writer/content creator from TN and Lead Editor for Gaming Trend. He loves Playstation, Star Wars, Marvel, and many other fandoms. He also plays way too much Call Of Duty. You can chat with him on Twitter @SplitEnd89.
Related Articles: Marvel's Spider-Man: Miles Morales
Share
Tweet
Share
Submit