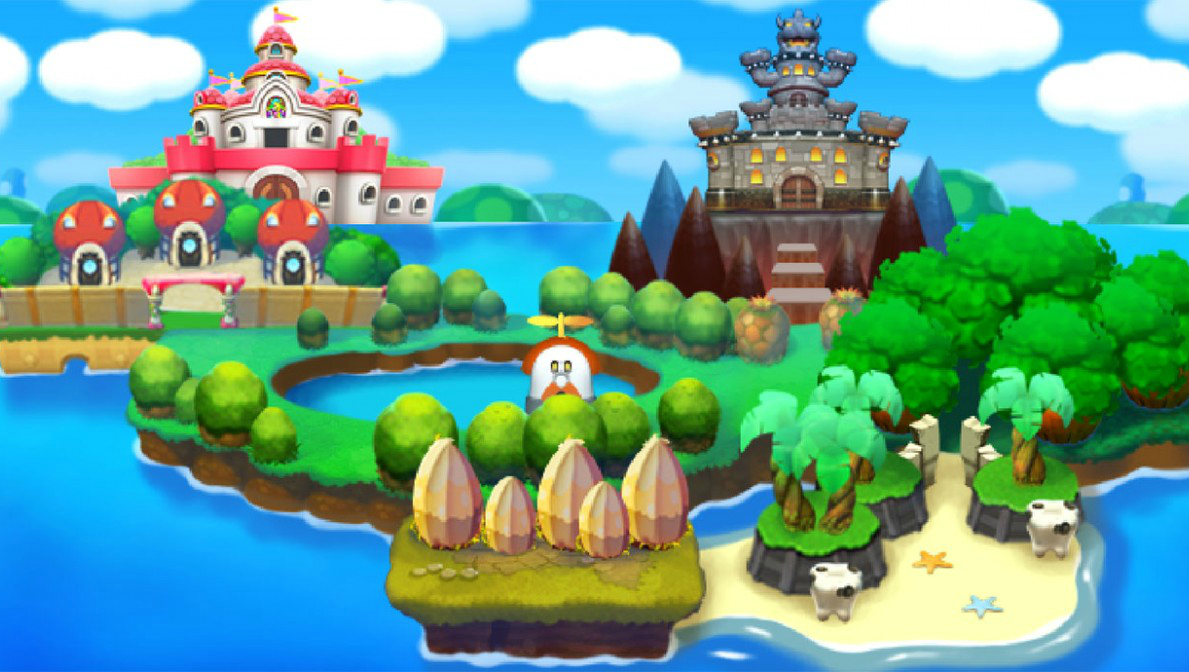 Even though signs are showing an impending death for the 3DS, there is still a golden opportunity for the device to showcase Nintendo’s modern classics to a group of fans that largely left Nintendo behind at the turn of the last decade. Nintendo appears to be seizing on that zeitgeist with a rerelease of Mario & Luigi: Bowser’s Inside Story + Bowser Jr’s Journey. The second title is new, but for me and many others so will the first.

Even if you are blessed to have played the game at its original release, Bowser’s Inside Story is a great enough game to bring you back for another run. The game effortlessly combines RPG, platforming, puzzle, and strategy elements into a bright package, complete with all the cornball humor and slapstickery present within the Mushroom Kingdom. With the simplistic but fun addition of Bowser Jr’s Journey, this release signals the final age of the 3DS will be a joyous lead up to the end.

In Bowser’s Inside Story, the Mushroom Kingdom is dealing with the sudden engorging of Toads, caused by a nasty infection called the Blorbs. Peach calls together an emergency meeting with her top Toad officials, a representative of the star sprites, and Mario and Luigi themselves. The meeting is interrupted by Bowser, who is quickly dispatched by Mario and sent flying into the woods.

In these woods, delirious with anger, Bowser is gifted and eats a mushroom that makes him run back to the meeting to vacuum-inhale everything in sight, including Peach, Mario, Luigi, and many other inhabitants of Peach’s Castle. The gift giver, a lunatic scientist named Fawful, plans to take over all of Mushroom Kingdom. Thus begins a simultaneous adventure of Bowser’s travels in the world with Mario and Luigi’s travels inside of Bowser’s cavernous and disgusting body.

The game is in the Mario RPG realm, so battles are turn based affairs with timing challenges associated with each attack and dodge attempt. Depending on which characters you choose, you’ll be timing out powerful strikes, kicking shells back and forth, or landing devastating double jump attacks on the hordes of dangers ever present in the kingdom. This variety makes each moment of the battle active and makes for the most difficult part of the game to master, particularly with the defensive maneuvers.

Mario and Luigi work together for many of their attacks, and otherwise use their particular talents with jumping and swinging large hammers to their advantage. Bowser employs a powerful punch and soon learns a vacuum skill that allows him to suck up enemies, powerups, and other specialties. The vacuum ability also sends enemies down into a battle with the brothers, though many will instantly flee and go back to face Bowser instead.

Navigating the world is a mix of platforming and puzzle challenges but mostly stays very easygoing and straightforward. For example, at a point Bowser has to fill or empty his body of water, allowing Mario and Luigi to navigate around either on foot or by swimming. While it has a special charm to it, there is a lack of actual problem solving, relegating the water mechanic into a glorified on/off switch.

The game is very easy to pick up and learn, allowing you time to adjust to it in stages that don’t drag on like many intro sequences do in RPG titles. While it can be clunky adjusting to switching between Mario and Luigi using the A and B button, and Bowser using the X button, there is no rough element to the actual transition between screens, meaning you can adjust without risk of game-tainting frustration.

The game looks fantastic, with that classic Mario charm throughout the main world outside of Bowser’s horrible body. The design of Bowser’s insides is increasingly disgusting and mind-boggling as you progress. The number of sphincter-esque structures is alarming even for a baddie like Bowser, and the various other nodes, nerves, and cells make up a slimy, stretchy cavern that you can practically smell through the machine. I hate it, and I love that I hate it.

The game sounds and music are charming, beautiful and cartoony in the way you’d expect with a Mario release. All of the sound effects are crisp and clear throughout the game and do the ultimate job of going relatively unnoticed, meaning they fit the action well. The music is beautifully done and brings a bit of the old into new scores for each various level or scene.

Bowser Jr’s Journey is a much smaller game. The game is played in stages, where Bowser Jr. and a small battalion of his minions face off against other squads in what amounts to a series of shove fights. There are three types of fighters: melee, ranged, and flying, each with a strength or weakness against the other two types. The game is centered around setting the correct lineups for the enemies you face, both in unit type and formation, which bestows bonuses based on the shape you create.

The game is mostly hands-off, with all of the challenge coming in the planning stages. While not the most action-based game, it gives a nice little extra punch up to the release. There is a lot of different ways the game can be played and won, depending on how you want to approach each stage. While not constituting a stand-alone reason to bring players back to the original game, it certainly will be an appreciated bonus for those who do.

Mario & Luigi: Bowser’s Inside Story + Bowser Jr’s Journey is a one-two punch of fun, casual and amusing gameplay, complete with all the expected charm, humor, and challenge expected of a game in the Mario Universe. Bowser’s Inside Story is one of the more odd and varied titles I’ve ever played, but it is a little too easy. The overall product combines several of the best game styles into one, yet the final product feels incredibly cohesive and is a must play modern Mario experience.

Patrick Rost has been with Gaming Trend since 2013. At first focused on sports coverage, Patrick has gone on to cover a wide range of games and other products for the website. Outside of Gaming Trend, Patrick writes and records music, grinds perpetually in Elder Scrolls Online (PS4), and lives day to day with his two dogs, Bob and Stella.
Related Articles: Mario & Luigi: Bowser's Inside Story + Bowser Jr's Journey
Share
Tweet
Share
Submit