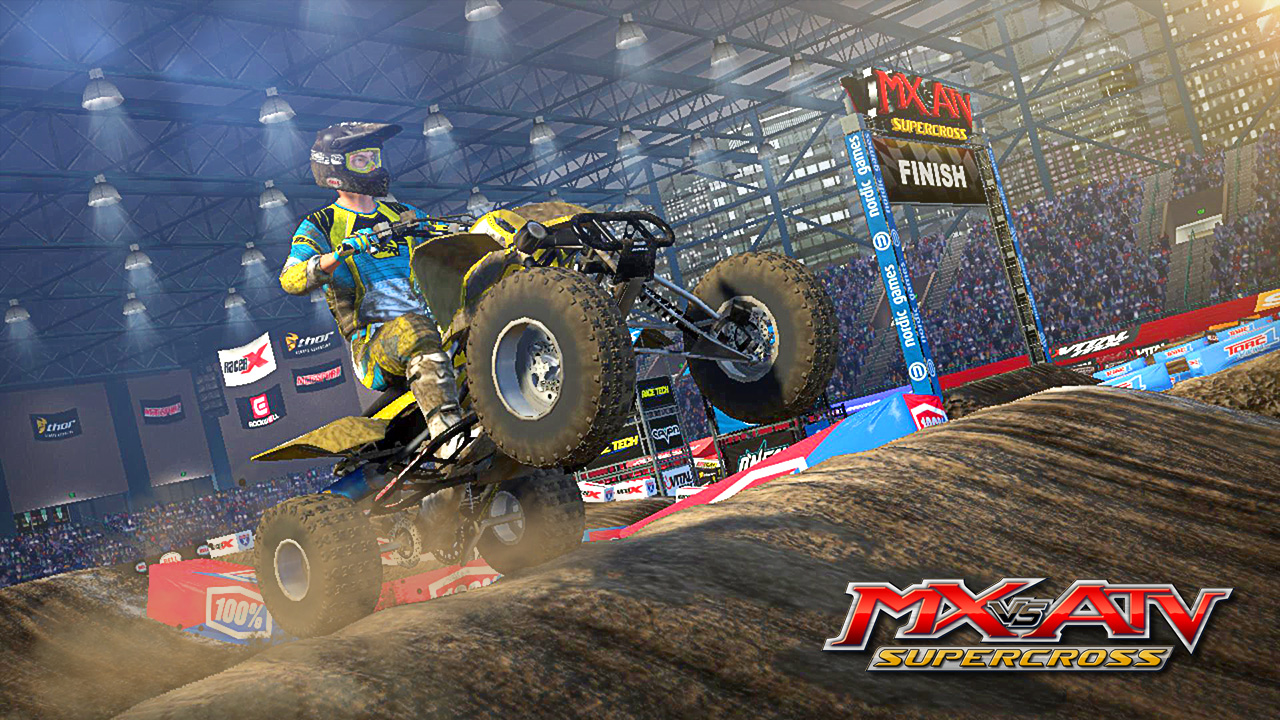 THQ had a fire sale of their licenses when they went out of business. The big publishers snapped up their biggest franchises like WWE. However, Nordic games purchased the rights to several smaller franchises that either went unnoticed or had cult followings. One of those was the MX vs ATV series, and with that Supercross was born.

Supercross includes the modes you’d expect to find in a racing game. You have the single race, where you race against eleven other vehicles on one track. The career mode includes the meat of the game. By winning races you progress through the ranks. New tracks and equipment open up as you finish, and before long most of the tracks and bikes will be unlocked. While the standard bike that you get when you start can handle most of tracks, there may be those times when you want something more powerful to finish in first place. Eight-race seasons will challenge you, but you don’t have to race all of the races in one sitting, which should be a relief to those who have to get up and resume their life. If you are the type of player that wants a gold medal in all the races, you need them. Thankfully casual players won’t have a difficult time to see most of what the game has to offer.

Graphically Supercross reminds me of the original Quake, brown with a little color mixed in. Obviously most of the time is spent on the dirt tracks, but the tracks start to blend in together after a while. It wouldn’t be so bad if the graphics were better and had more variety to them. The stilted animations don’t help the situation either, making the racers look stiff, even in crashes.

No tutorial is given, so it can take a while to get familiar with the control scheme. The left analog stick is used for steering, while the right one is used for leaning. Using both analog sticks helps you control your racer better, especially for the turns on a MX bike. The learning curve for the controls takes a bit of patience though. The controls aren’t as strict as a simulation, but they are more authentic than what you’d find in an arcade racer.

Since it is called MX vs ATV, you have the opportunity to race both types of vehicles, and both can be in the same race. Their handling is much different as well. The bikes can turn quicker, but they are lighter and can easily be tipped in the wrong direction. The stability ATVs offer make them lose control less, but they aren’t as fast as their two-wheeled brethren. Eventually you’ll find the right vehicle for you, or get a better one that lets you finish the race faster than what you did previously.

Musically nothing stands out, as the generic nu-metal sounds go in one ear and out the other. The engines are significantly loud, with buzzing when they accelerate. You probably already have a good idea what these sounds are like if you have played this kind of racing game or watched a little of it on TV.

It’s not surprising that MX vs ATV Supercross was released as a budget title. The amount of gameplay and unlockable content is good, but it is hard to drive your way through all of the necessary tracks without getting a bit bored. It might be a good game to pull out if a relative is in, but it’s so disappointing that they aren’t able to include more content so that they could have charged full price for it.

While not working as a Database Administrator, Keith Schleicher has been associated with Gaming Trend since 2003. While his love of video games started with the Telestar Alpha (a pong console with four different games), he trule started playing video games when he received the ill-fated TI-99/4A. While the Speech Synthesizer seemed to be the height of gaming, eventually a 286 AT computer running at 8/12 Hz and a CGA monitor would be his outlet for a while. Eventually he’d graduate to 386, 486, Pentium, and Athlon systems, building some of those systems while doing some hardware reviews and attending Comdex. With the release of the Dreamcast that started his conversion to the console world. Since then he has acquired an NES, SNES, PS2, PS3, PSP, GBA-SP, DS, Xbox, Xbox 360, Gamecube, and Wii. While not playing video games he enjoys bowling, reading, playing board games, listening to music, and watching movies and TV. He originally hails from Wisconsin but is now living in Michigan with his wife and son.
Related Articles: MX vs ATV Supercross
Share
Tweet
Share
Submit