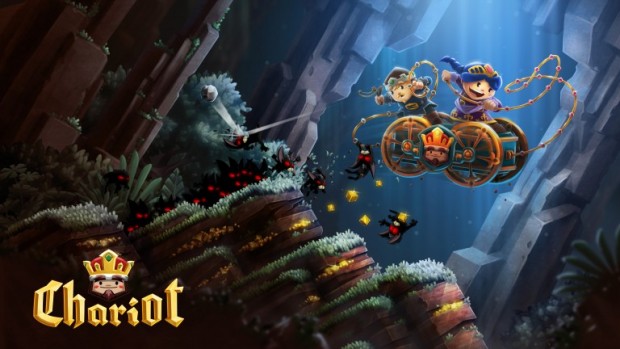 The platforming genre was what defined my early childhood.  I have some fond memories of playing each and every Super Mario Bros. game all the way to completion.  It’s a shame that the genre has mostly lost its prominence in today’s gaming landscape.  Sure, games like Rayman Legends and Super Meat Boy continue to breathe new life into two-dimensional platforming, but experiences like that tend to be few and far between.  While these types of games don’t come along as frequently as they used to, platformers that employ a fresh gameplay hook are often the ones that really stand out.  Enter Chariot, a new physics-based platformer that introduces a unique spin to the genre with its requirement of needing to see to the safety of a chariot throughout the adventure.  The result is a game that is not without its flaws, but does succeed in providing an entertaining experience with an interesting twist.

The premise of Chariot revolves around searching for the ideal final resting place of a recently deceased king.  The king’s remains are loaded onto a 4-wheeled wagon and it’s up to you to act as his escort.  Players are cast as the king’s daughter as she pushes and pulls the chariot across the game’s cavernous environments in search of an ideal sepulcher for her father.

One of the most appealing areas of the game is apparent from the get-go: the art style.  Chariot boasts colorful and cartoony visuals that look like they’re straight out of a children’s storybook.  The game’s underground setting gives Chariot a slightly darker shading at times, but that never stands in the way of its unique style.  The visuals are just so charming and are a perfect complement to its gameplay.

The art style is beautiful.

The gameplay is mostly simple in nature.  Players can run and jump throughout the stage, avoiding obstacles, while pushing, pulling and riding the Chariot to its destination.  Much likes game such as Dokuro, the platforming aspect of the game tends to be a bit slower, as players are encouraged to take their time and strategize, so as to find the best approach towards escorting their cargo across stages.

Getting past these obstacles is not always easy either.  Chariot starts off simple, but quickly ramps up in difficulty as you progress.  Maneuvering through the game’s various sepulchers will require both careful planning and precise timing to push through some of the tougher areas in the second half of the game.  Make no mistake, there will certainly be times where you will quickly reload to the last checkpoint after you’ve come to realize a fatal mistake that you’ve made.  Thankfully, the challenges always come across as smart.  There is some truly intelligent puzzle design here and developer Frima Studios never made any puzzles come across as unfair.

The game is not without its faults, though.  In particular, one major complaint that I had was just how precise movement needed to be.  Yes, this is to be expected in a game about dragging and swinging a heavy object, but it frequently seemed quite difficult to successfully put my thoughts into action when the chariot can slip away from you so easily.  Getting the chariot across some thinner platforms can be maddening and each jump requires the correct coordination to balance the weight of both yourself and the attached vehicle.  Landing successfully is then a game of trying to pull the chariot up without knocking the player off the ledge.  The ice stages, in particular, proved to be very frustrating at times as the slightest miscalculations could result in sliding too far and needing to start over.

Hey, I can see my house from here!

Chariot is certainly entertaining on its own, but it’s clear from the start that the game has an emphasis on playing with a friend.  Not only can the entire game be played in local co-op multiplayer, but it’s actually encouraged.  Aside from having better overall control of the chariot with two players, there is also the freedom of having one player explore an area while another guards it.  There are even two-player-only areas of the game where puzzles will require the assistance of a partner to gain collectables.  These areas are entirely optional, and the whole game can be successfully completed with a single player, but should you decide to bring a teammate along, note that multiplayer is limited to local co-op play only; in order to play the game to its fullest intent and collect everything, you’ll need to invite a friend over for help.  It’s a bit disappointing that in a game with such a strong encouragement to play in co-op that online multiplayer has been omitted.

As far as content goes, there is a considerable amount.  The main quest features the princess and chariot running through over two dozen stages, clocking in at about the 10-12 hour mark.  For players looking for more, each level has additional pathways to discover, with hidden collectables cleverly placed throughout, which can unlock new items and upgrades.  Levels also have speed run modes available, allowing players to push through levels as quickly as possible.  Lastly, there are also leaderboards available to track how your stats match up to other players.

Chariot is a fun, albeit slow-paced platformer with a refreshing art style and interesting concept. The puzzles are clever and require a strong balance of both planning and skills. However, the game’s challenging difficulty, demanding precision, and emphasis on multiplayer may prove to be frustrating to some. Still, if you can look past these flaws, Chariot is an entertaining game that platforming fans should enjoy.

Gaming Trend's resident amiibo collector, Matt's a lifelong gamer with a soft spot for Nintendo. As a new father, Matt often struggles to stay as involved as he has been in years past but can always be counted on to come back for some engaging geeky conversations. A resident of Philadelphia, he is currently working on building up his Man Cave with all things Marvel, Star Wars, and Video Games. As an old-school gamer, Matt firmly stands by his belief that gameplay will always be more appealing than story.
Related Articles: Chariot
Share
Tweet
Share
Submit