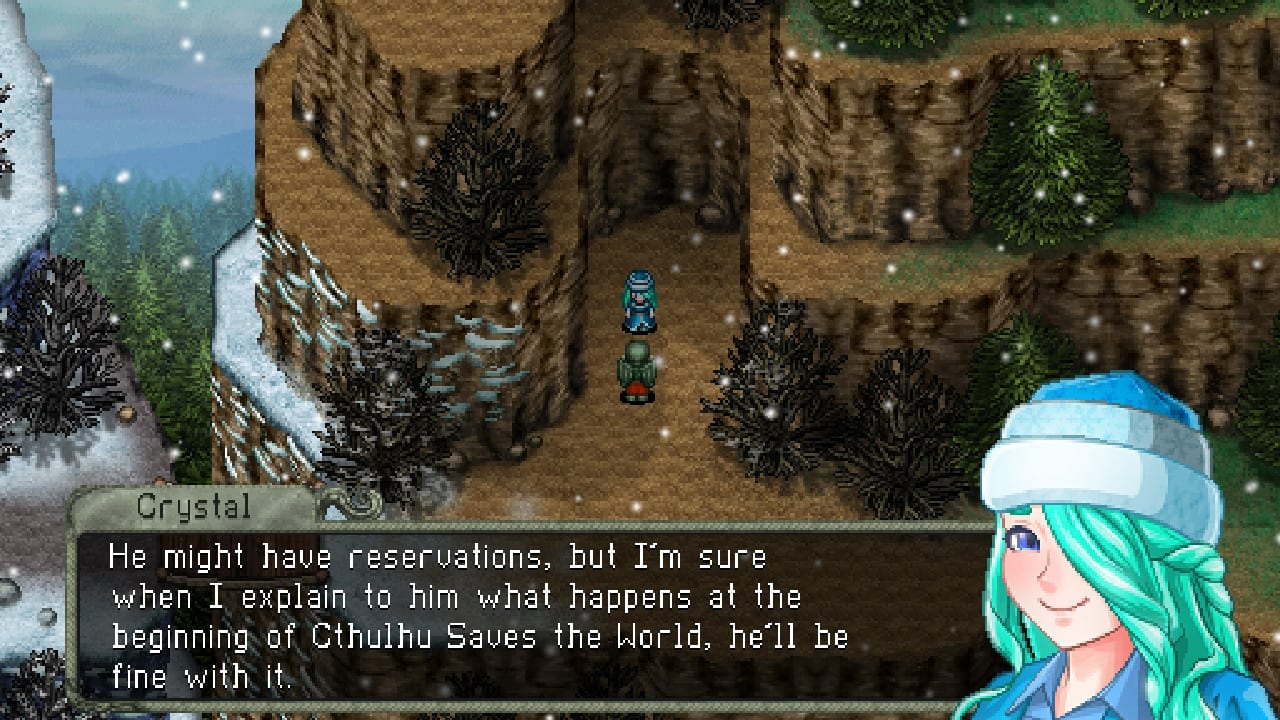 You know that meme where the view count for Mariah Carey’s “All I Want for Christmas is You” starts to rise around June? That’s me. All of it. 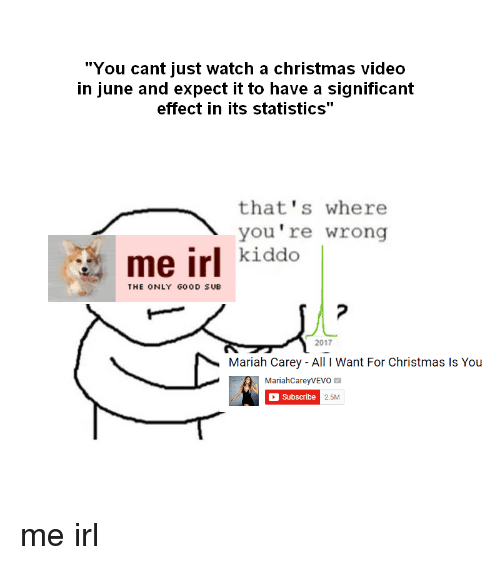 Christmas is my favorite holiday, and as a Filipino-Canadian I start getting festive as soon as September (traditional ‘ber months and all that). Sure, it might be a bit too early to talk about Christmas, but you know what? Limited Run Games surprised Switch owners by releasing Zeboyd Games’ Cthulu Saves Christmas recently, an irreverent RPG that leaves the seriousness of our favorite eldritch abomination at the door. Luckily, it’s strongly supported by an amazing turn-based system and rip-roaring story that will definitely make you laugh.

Released last year on PC, Cthulhu Saves Christmas is a prequel to the developer’s previous project, Cthulhu Saves the World. However, it’s functionally a spinoff of Cosmic Star Heroine, and considering that there are tons of references to that game here, I’d say it’s in the same universe. Before becoming the anti-hero we know and love from the first game, Cthulhu wants nothing more than to rule the world with his insanity. Unfortunately, the sudden disappearance of Santa Claus has forced time to stand still on Christmas Eve. You’d think this wouldn’t be a problem for an old one, but this incident has also depowered Cthulhu. 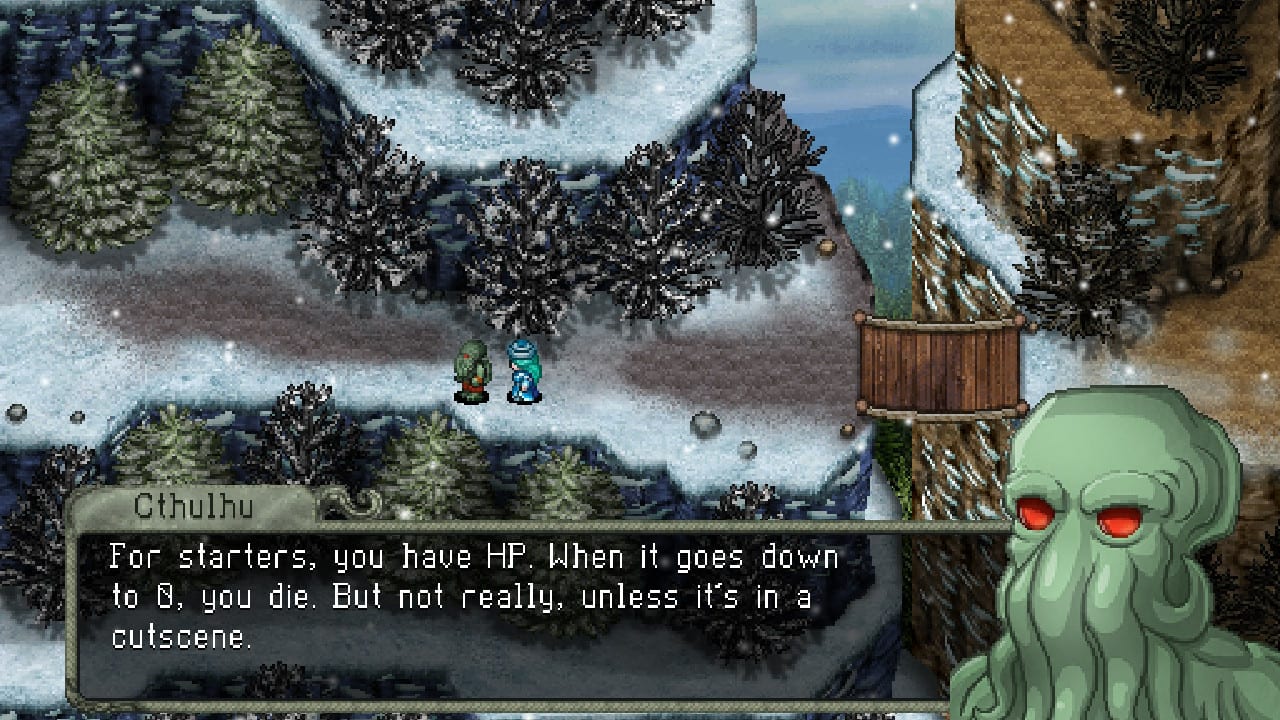 With the request of perky relative Crystal Claus and a promise to restore his power, Cthulhu reluctantly agrees to find Santa. He’s joined by two other mythical legends, Baba Yaga (chan) and Belsnickel, who are remarkably friendlier than the source material suggests. The gang has to find the League of Christmas Evil and defeat each member in order to find Santa and restore (in)sanity once again. 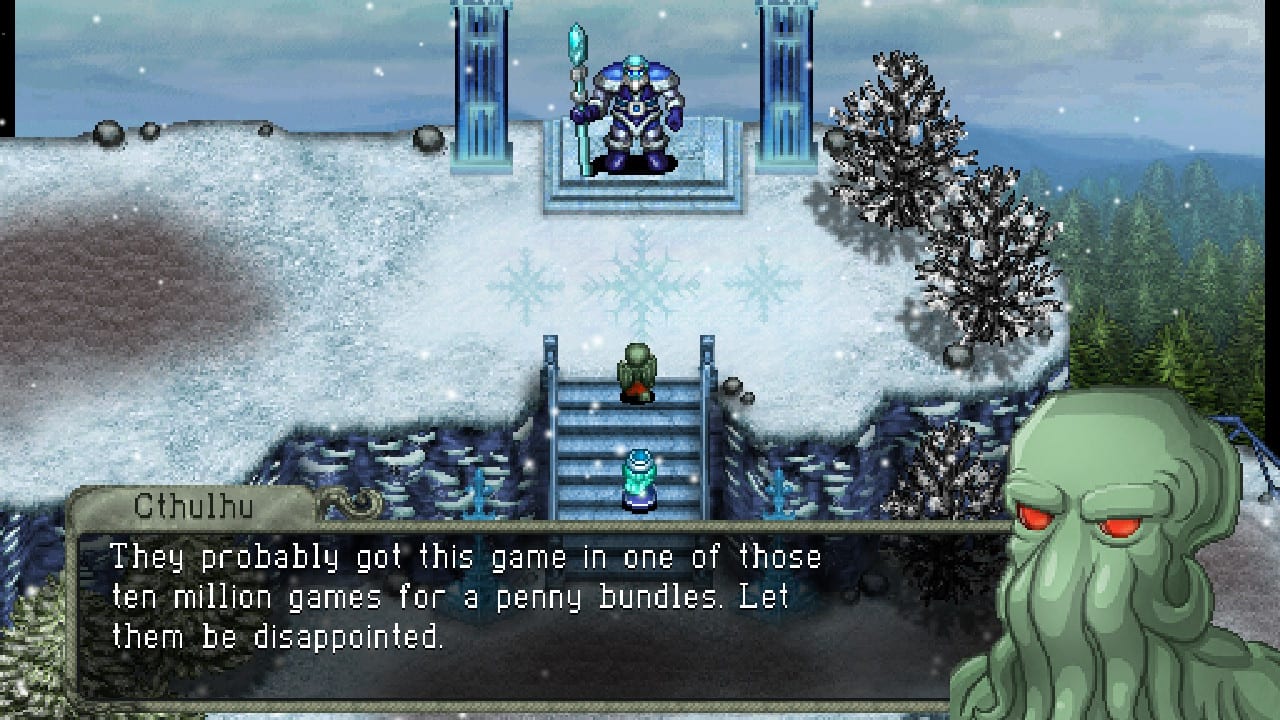 While this sounds like a run-of-the-mill RPG plot, the execution here is anything but normal. Due to the similarities of Cosmic Star Heroine, I’m going to compare both titles; I noted the story was a bit generic in the former, but here? Oh boy is it a ride and a half. The written dialogue feels like something from the English dub of the Ghost Stories anime, and it improves the enjoyment of the plot so much. Cthulhu laments about his powerlessness while Belsnickel proudly declares that he whips children, much to the Elder god’s delight. (Considering the original mythos, that’s… putting this lightly.) The League of Christmas Evil is stereotypically hammy, and the game pulls off more fourth wall breaks than Deadpool at a Marvel comic con. These monstrous creatures are dumbed down to bit players in a silly story which kept me entertained and loving the whole experience. When you can give me joke references of everything from Baba is You to Frozen, you bet I’ll laugh my butt off. I’m glad that the one thing Zeboyd could fix from the previous title was made better here. 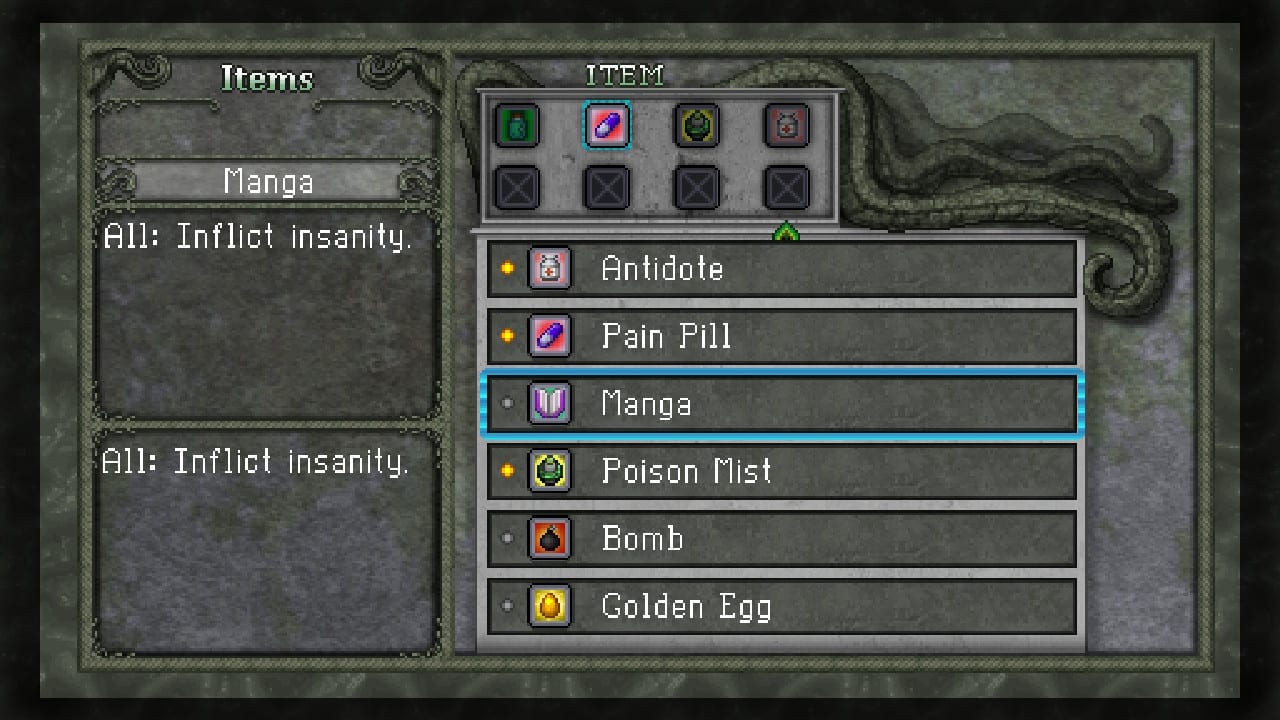 The fact that manga makes you mad is… oddly accurate I guess?

Luckily, the main battle mechanics are improved from Cosmic Star Heroine as well. The same turn-based system remains with a few tweaks, all for the benefit of the game. What’s the same, you ask? Each character has seven different abilities, plus a recharge option. Most abilities are usable only once and must be recharged in order to be used again. Every character also has a hyper meter which will allow them to use powered-up versions of an ability every few turns. For example, a move that will replenish an item used will actually be upgraded into every item coming back in hyper mode. It helps to experiment and look at your menu in order to determine how you want to plan your moves. Enemies are weak to different elements and status afflictions, so you’ll want to figure out which character will have a move you need.

That said, it’s best to finish the battle as quickly as possible, since enemies get stronger with each turn; prolonging the fight will get you killed. That said, an unstoppable buff will allow you to survive death and even grant you some more power; stay in the negative amount after your turn ends and you die for the rest of the battle, which gives you some risk/reward strategy here. Also of note is the fact that status ailments are effective and outright encouraged to use, as pretty much every enemy can be afflicted with poison, charm, disarm (lower attack), and the like. Even if the status effect fails (since there are resistances), each unsuccessful attempt will raise the chances of it becoming successful later on. It’s this attention to detail and a lovingly crafted battle system that made me adore the grind (more on this later). 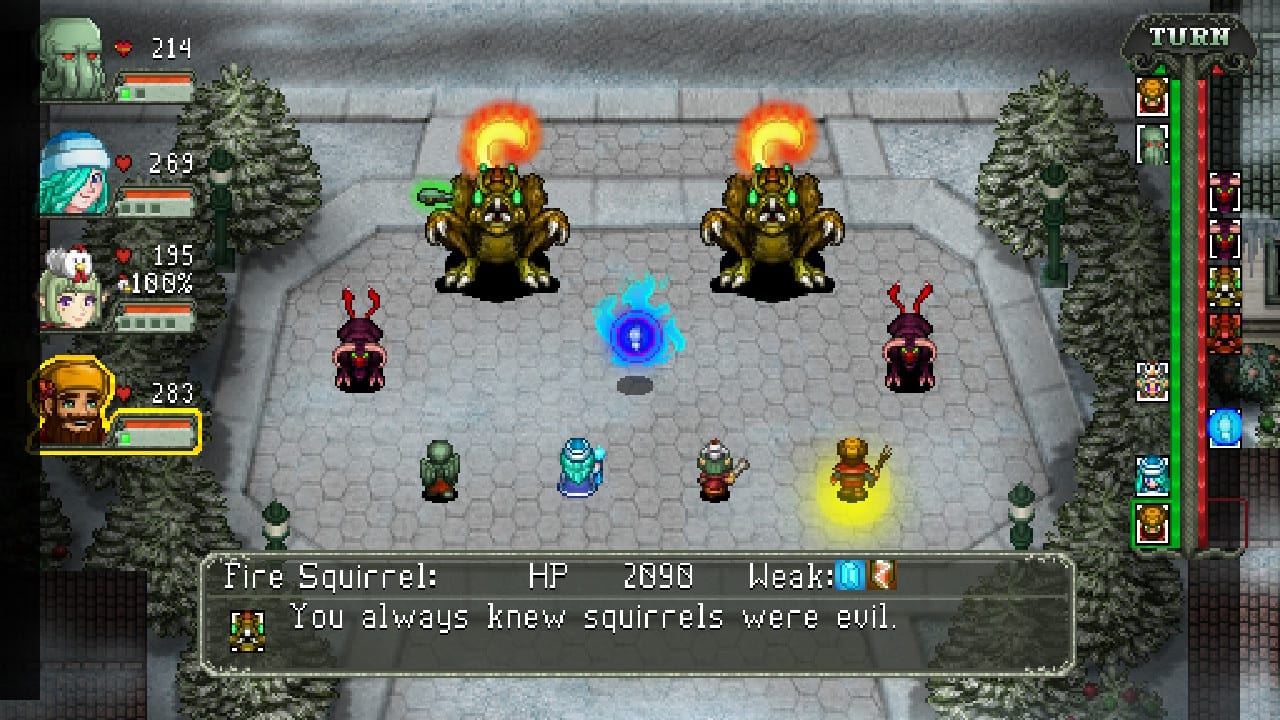 The main difference that separates Cthulhu Saves Christmas into a much more complex game is the inclusion of the Insanity mechanic. While Cosmic Star Heroine allowed you to pick seven abilities and your recharge freely, this game only allows you to pick four. The other three are randomly selected based on a pool of exclusive Insane abilities as well as abilities you didn’t choose. The bottom row of abilities will shuffle when you recharge, which adds a layer of complexity here. Suddenly, abilities that you didn’t even consider (say, a poison ability, which really is only good once) becomes viable due to the random draw mechanic. For example, Crystal has an unstoppable buff ability, which I wouldn’t select as a regular ability but would definitely use once or twice. Thanks to the Insanity mechanic, I could just wait for the move to show up in my bottom row of the move list and shuffle it out once I recharged again. You’ll also get Unite moves that can be used once per battle, though every pair of characters gets their own move together. Teaming up with Cthulhu, for example, will grant you powerful attacks while someone like Belsnickel will give you healing boosts. 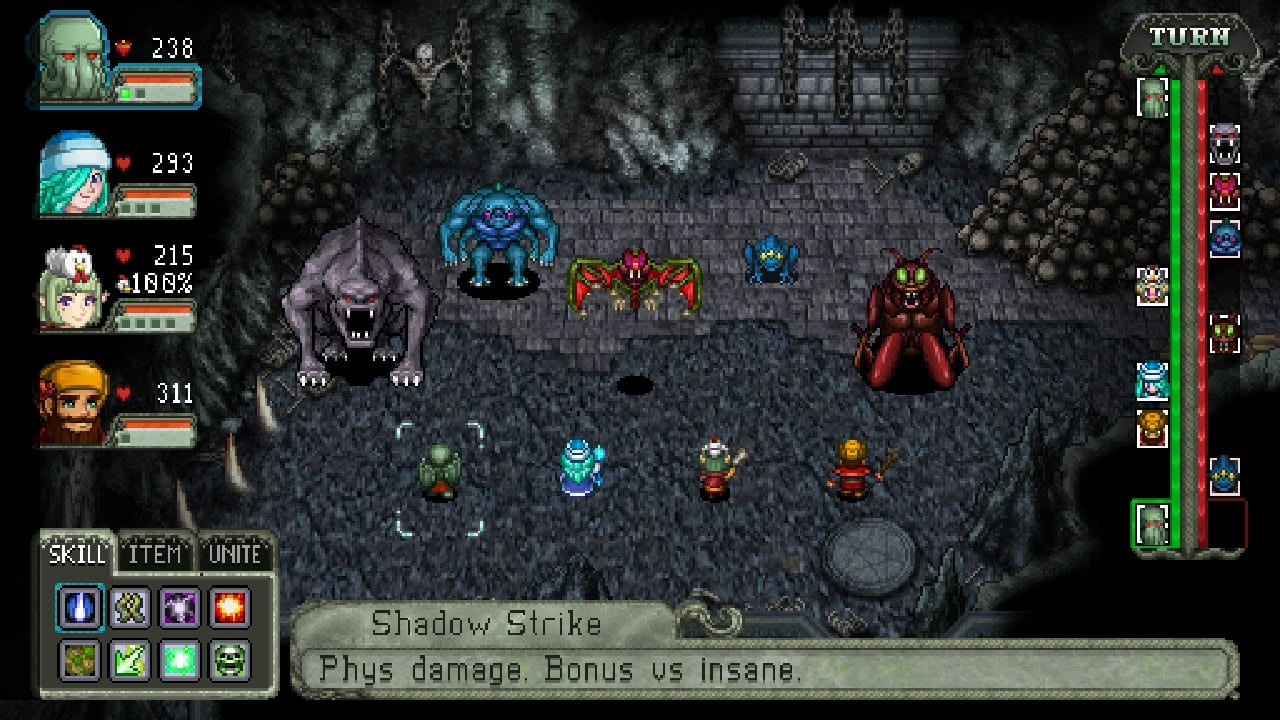 It isn’t a Lovecraftian horror work without Cthulhu handing out the ability to drive people insane, and some of his moves can inflict Insanity on enemies. Every time this is cast, the enemy changes its form and becomes a little more powerful, but also gets their weaknesses switched around. This means you can fight earth monsters that suddenly have a weakness to earth attacks due to Insanity (somebody get Sudowoodo in here, stat!), or an enemy that can finally succumb to your disarm attack. These new mechanics give Cthulhu Saves Christmas a distinct Lovecraftian-lite identity while still remaining a comedic RPG. It’s an engrossing system that I definitely want to see used in future games.

Cthulhu Saves Christmas is an RPG that respects your time (lasting around 7 hours on the normal Insane difficulty), and as a result, everything’s streamlined to a tight degree. It’s a double-edged sword and probably the biggest issue with the game. There is no money or side quests to tackle; instead, you have Persona-like R’lyehtionship segments between bosses where you get to spend time with your friends or doing things around town in order to get gear and items. Want to see Cthulhu unsuccessfully eat a gingerbread house with Baba, or get caught in a cultists anonymous group? Well, here you go! 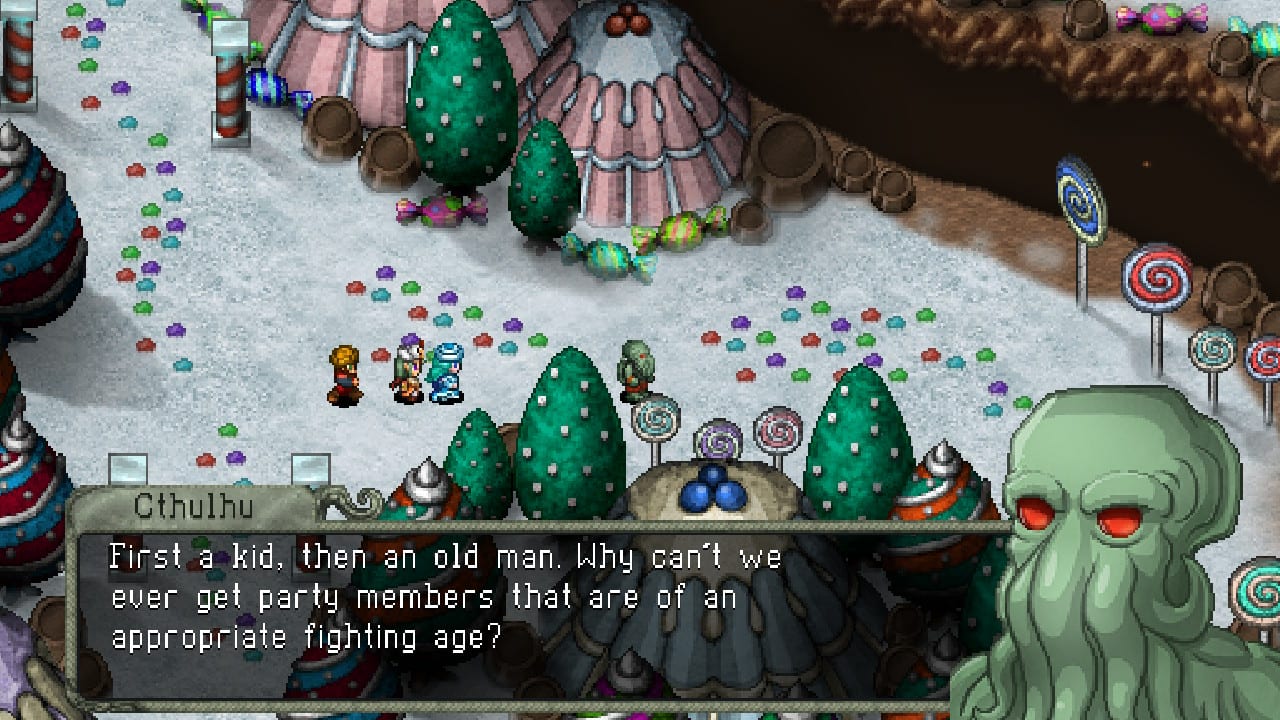 These segments carry the game’s trademark humor, but I also found out that the effects of the item or equipment you get is unknown until you finish the segment. There are limited opportunities to grab these items as well, so it would have been nice to know what a certain piece of armor did before I went and selected my option. The unknown aspects of the UI also work as a disadvantage in battle, since there isn’t a way to differentiate status or element weaknesses through the icons provided. You’ll learn which icon is which eventually, but it would have been nice to display visual cues in the included tutorials.

The game is also extremely linear, since you only have the four characters in your party and a clear path straight to the boss. Luckily, I did like the mechanic where you can skip battle encounters or start them up yourself for level grinding. After a set amount of battles, you’ll stop executing random encounters (feeling oddly like an Undertale genocide run, if I’m being honest) but can still manually grind. It’s a shame that there’s literally nothing to explore except for a few chests scattered around the map. There isn’t any flavor text or overworld elements with which you could interact, and that’s a shame. It makes the traveling segments quite undercooked, and I thought that the walking bits were very monotonous. Thankfully, the soundtrack wasn’t boring at all, and it has one of the best remixes of Carol of the Bells I’ve seen in a video game to date. 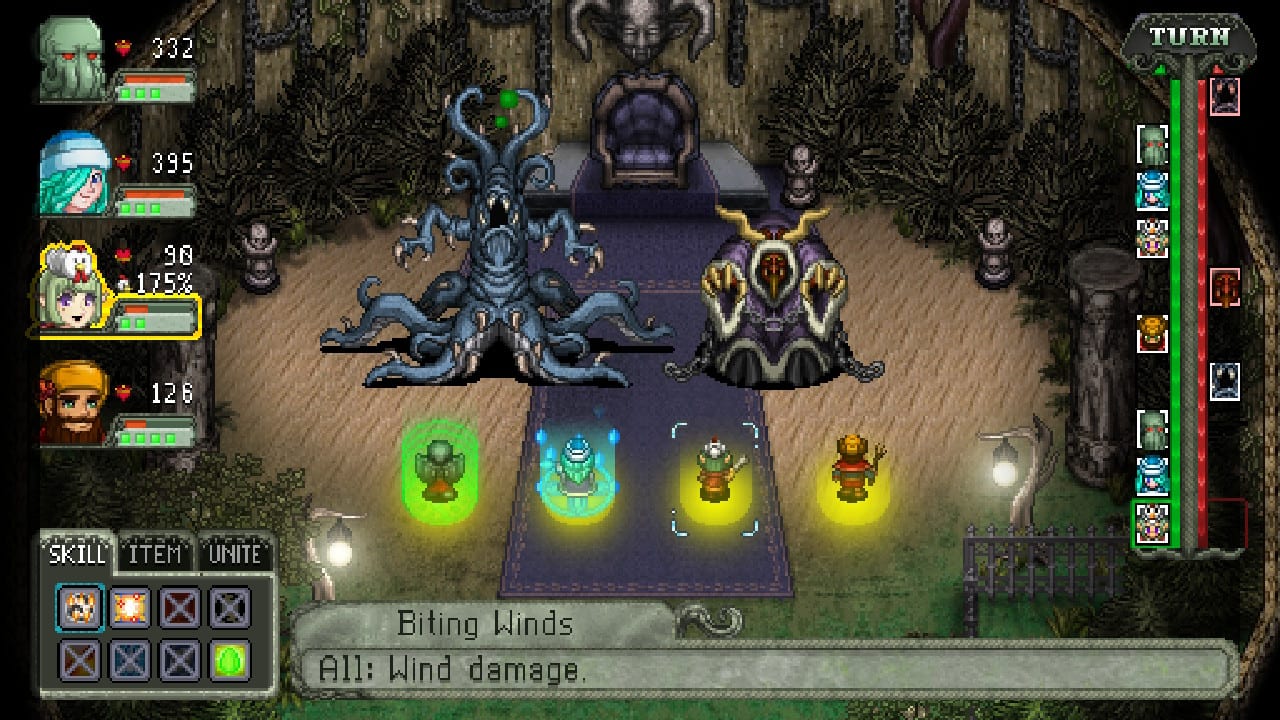 Whether this is your first experience with the satirical duology or a revisit to the tale, Cthulhu Saves Christmas is a short and sweet RPG that will have you laughing until Santa decides to leave the North Pole for Christmas this year. (spoiler: that’s a long time!) Its new and improved turn-based system will entertain even the most curmudgeonly jaded RPG fan.

Elisha Deogracias is an aspiring accountant by day, freelance writer by night. Before writing for Gaming Trend, he had a small gig on the now defunct Examiner. When not being a third wheel with his best friends on dates or yearning for some closure on Pushing Daisies, he's busy catching up on shonen manga and wacky rhythm games. Mains R.O.B. in Smash. Still doesn't know if he's a kid or a squid.
Related Articles: Cthulhu Saves Christmas, Indies
Share
Tweet
Share
Submit