The 3D platformer has seen a resurgence of late. With games like A Hat in Time, Super Mario Odyssey, and the remakes of the Crash Bandicoot and Spyro trilogies, it’s a good time to be a fan of the genre. New Super Lucky’s Tale is an enhanced version of the 2018 game, hence the “New,” and was released on Nintendo Switch 2019. Now in 2020, this version is making its way to PS4 and Xbox One. I adore 3D platformers, so I jumped at the chance to jump around this colorful world.

Lucky’s Tale begins with the titular character and his older sister Lyra, who narrates the story, on the run from an evil family of cats named Jinx and his Kitty Litter who want control of the Book of Ages. The book’s magic goes haywire, and the kittens are sucked into the book along with Lucky, who must now recover the pages of the tome from the Kitty Litter, save the various worlds inside the book, and get back home to Foxington. It’s a surprisingly serious setup, though that tone is quickly forgotten in favor of some charming, cartoony antics. Each hub world is presided over by a member of the Kitty Litter, who will occasionally appear to taunt Lucky in a humorous way. While none of the characters are particularly memorable, they give each of the unique locations more charm. 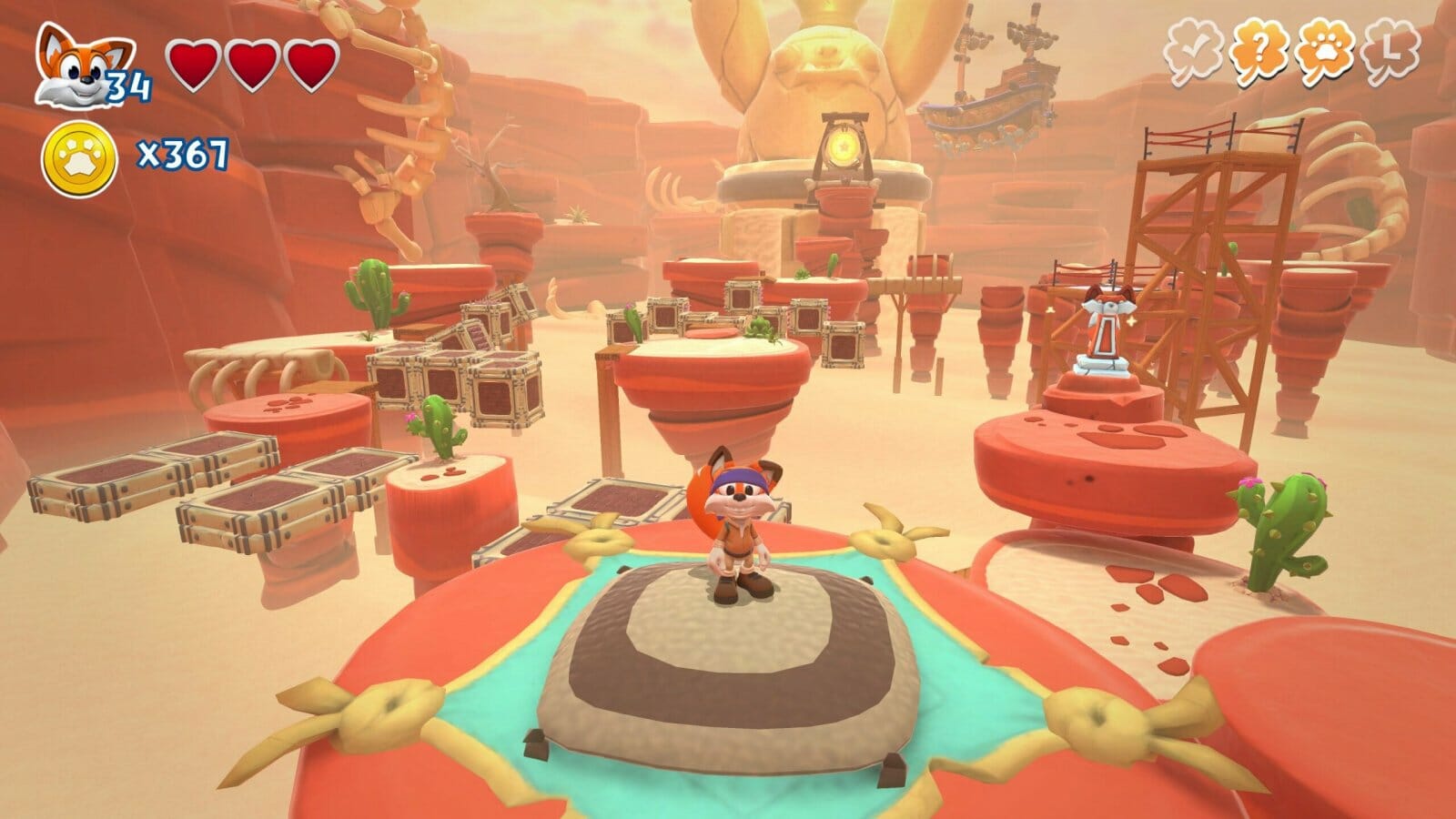 As you explore the worlds, you’ll come across portals to new levels which reward you with four pages for accomplishing four objectives. You get one page for finishing the level, getting 300 coins which can be used to purchase costumes, finding the letters of LUCKY, or finding a hidden page. While these objectives stay constant throughout the entire game, there’s quite a lot of variety in actually accomplishing these tasks. One level might be focused on freeform exploration, while others may be straightforward 2D platforming, exploring a maze, or even auto running levels. This variety, along with each world’s unique theming, keeps you engaged throughout this short adventure, and gives you incentive to 100% the game even after you’ve seen the ending.

While you only need a few pages to advance to the next world, I usually held back to see what each level had to offer or just for the sheer joy of Lucky’s moveset. He can double jump, tail whip enemies, and burrow underground for secrets or just moving faster. You can easily transition from one move to another, which gives the game a great sense of flow that few platformers can achieve. I have a few complaints about the game’s controls, however they are relatively minor. Lucky runs and burrows a bit too slow for my tastes, though that is coming from someone who likes to casually speedrun these kinds of games so take it with a grain of salt. In the 2D levels, I found it odd that I couldn’t use the D-Pad, the game doesn’t require precision at any point, but that method is what I naturally gravitate towards in a 2D setting. The game is also super easy overall, even if I was stumped by a few optional puzzles and died a couple of times on the final boss. I don’t mind the lack of difficulty, but players hoping to challenge themselves should look elsewhere. 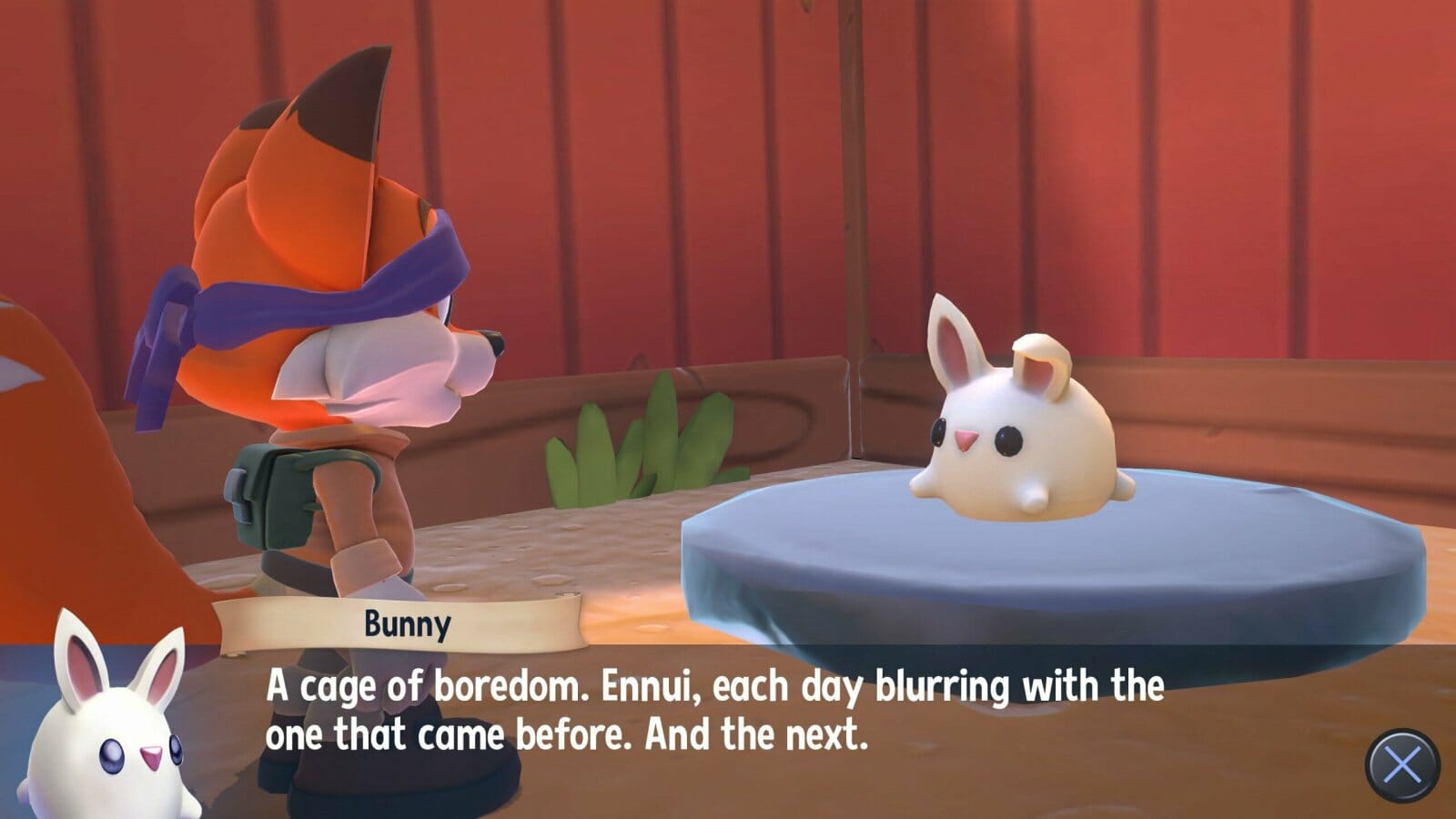 It’s worth noting that the game looks gorgeous, even with its vibrant and colorful art style, the game runs in 4K at 60fps on my PS4 Pro. Sadly I’m not able to capture natively in 4K, so you’ll just have to trust me that the game looks even better than it does in these videos.

New Super Lucky’s Tale is a charming platformer with tons of variety in its theming and level design that, while short and easy, will put a smile on your face and remind you of classic platformers like Spyro the Dragon.

David is the kind of person to wear his heart on his sleeve. He can find positives in anything, like this is a person who loved Star Fox Zero to death. You’ll see him playing all kinds of games: AAAs, Indies, game jam games, games of all genres, and writing about them! Here. On this website. When not writing or playing games, you can find David making music, games, or enjoying a good book. David’s favorite games include NieR: Automata, Mother 3, and Gravity Rush.
Related Articles: Indies, New Super Lucky's Tale
Share
Tweet
Share
Submit