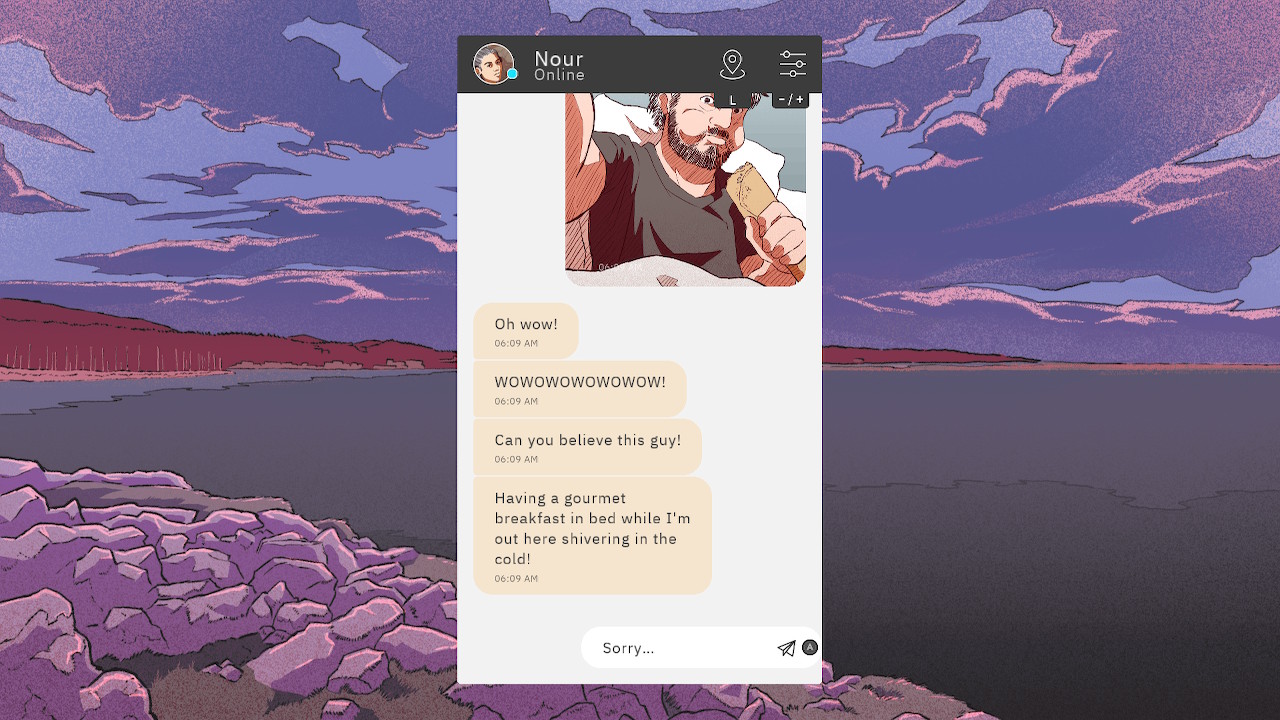 We’re used to making choices in video games that decide the fate of millions, so how is it that a game about protecting a single person is one of the most affecting games ever made? Inspired by a 2015 newspaper story, Bury me, my Love tells the story of a Syrian refugee making her way from her war-torn home in Homs to seek safety in Germany. Both the journalist who wrote the news story and the woman whose journey it chronicles served as consultants on the game. You play not as Nour, the woman making the journey, but as her husband, Majd, monitoring and guiding her from home through text messages. While this could have ended up making the player feel detached from the action, the game uses the limited control you have over its events to ramp up the tension.

The entirety of Bury me, my Love, which was originally released as a mobile game, is played through the interface of a text messaging app. Nour and Majd will occasionally send each other selfies, and you can track Nour’s progress on a map, but otherwise, you only see the messages they send. The game’s writing is sharp and both of its major characters are extremely well-defined, so I immediately began to feel for them despite knowing only as much as I could glean from their texts. Nour and Majd’s relationship is crucial to making the game work, and it’s pulled off startlingly well. Their portrayal is believable and likeable, with their love for each other depicted not through saccharine dialogue, but through the way they bicker and disagree, and through the obvious affection in the jokes they make at each other’s expense. As Majd, you communicate with Nour by selecting from several text messages and emojis, often just to react to what she’s saying in a way that defines their relationship rather than moving the plot forward. Nour and Majd are relatable and recognizable as real people, not just avatars for refugees, which makes the trials that Nour goes through that much more harrowing. I can’t imagine playing through this game and not coming away with greater empathy for the plight of real-life refugees.

Nour and Majd know at the journey’s outset that it will be tough, but they aren’t prepared for everything headed their way. Before she even leaves Syria, Nour may have to contend with armed militias and bombings, depending on the route she takes. Throughout the course of the game, she will ask Majd for advice on where to go, what to do, and who to trust. At first, I chafed at the idea of using a man to essentially control his wife’s actions, and while that feeling never fully went away, Nour is far from a puppet. Nour doesn’t always ask for your advice before acting, and she’ll make her disagreement with your suggestions known, which makes for plenty of tense moments when you want her to play it safe and has other ideas. Depending on which route she takes, Nour may have to sneak past police barricades, make dangerous nighttime border crossings, or contend with neo-nazis. When she gets wrapped up in something without time to stop or her battery runs out, hours or days may pass (in-game, at least) without a message. Though time speeds up in these instances, leaving only seconds between messages, I still felt a lot of anxiety at times, such as when Nour went silent after setting out on a long journey by raft. I couldn’t help but feel some guilt when I made a decision that went wrong, knowing that my character wasn’t the one putting his life on the line.

The obstacles that Nour faces on her trek are things that refugees in the real world are still sadly contending with day after day, more than three years after the start of the real-life journey that inspired Bury me, my Love. Nour comes face to face with the realities of xenophobia and police violence, as well as aid organizations such as Doctors Without Borders and UNESCO, but the game never feels like it’s exploiting real tragedies or advertising for any group. It’s an inherently political game, but one whose politics emerge naturally from its story. It never has to stop and tell you what’s right and wrong. It makes its case for tolerance, open borders, and aid for refugees simply by showing you the grim consequences of a world lacking those things.

My only real issues with Bury me, my Love were technical. As much as I ride the “port everything to Switch” bandwagon, Bury me, my Love is diminished a bit by leaving the mobile platforms it was originally designed for. The Switch version does include touch controls, which do a decent job of approximating scrolling through a phone, and it uses its extra screen space to show off the beautiful hand-drawn “photos” that Nour sometimes sends to Majd, but it’s still a different experience. There’s just something about using an actual phone to play a game about phone conversations that can’t be replicated. More concretely, the port also removes the original’s real-time gameplay. On the mobile release, you would receive Nour’s texts when she sent them in the story, so if she went two days without cell signal, you would have to wait two days for her next message. Even a delay of a few minutes felt agonizing this way, and while the Switch version’s instant updates are still affecting, they’re felt less viscerally.

These instant updates do make replaying the game easier, but I wish there were some way to skip straight to certain locations or choices, since Bury me, my Love shines on multiple playthroughs. There are 19 possible endings, with countless ways of arriving at them, and it’s worth seeing at least a handful of them. Finishing the story multiple times to see different outcomes feels like shining a light on the diversity of refugees’ experiences. Many are heartbreaking and even the “good” endings often involve some amount of compromise, and plenty of danger, which made me want to keep playing to give Nour a better outcome. Since there’s no way to skip forward in the story, so you’ll have to replay the same scenes over and over to see different endings.

Don’t let these quibbles stop you from playing Bury me, my Love. If you want to experience the gut-wrenching real-time messages of the original, it’s still available on iOS and Android, but the Switch version provides a convenient and fully functional alternative. Whatever platform you play on, it’s the story that really makes Bury me, my Love an essential, eye-opening experience.

Bury me my Love

Using only text messages, Bury me, my Love develops two relatable main characters and tells the engaging story of a Syrian woman’s search for refuge in Europe after her sister is killed in a bombing. The game rewards multiple playthroughs with its compelling writing and interesting storylines, though replaying the same passages can be tedious.

A committed indoor kid, Bryan moved from Pittsburgh to Los Angeles for a prettier landscape to ignore. They can be lured outside with promises of taco trucks and film festivals, and enjoy trawling through used book stores for works on the occult. Bryan has been gaming since the SNES era and is a sucker for good pixel art.
Related Articles: Bury me my Love
Share
Tweet
Share
Submit