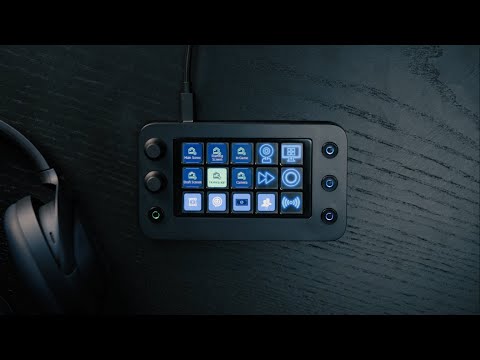 I use the Loupedeck CT for a great many things. It’s my speed editor for video work, it’s great for fine tuning images, and the jog wheel and analog knobs give me fine grain control that I can’t get with another device. Similarly, the Loupedeck Live has been my go-to for streaming, allowing me to start and stop my streams, captures, and scene switch, as well as controlling my in-game microphone independently from the speakers. Loupedeck has announced that they’ll be bringing a new iteration to life that combines the best parts of both of these pieces of hardware, along with a number of software improvements to power it all. I’ve spent the last month testing the Loupedeck Live S, but before we get to all that – let’s unbox it formally and get a closer look.

First – some housekeeping. You may have seen some recent announcements from Razer and thought “Hey, that kinda looks like a Loupedeck!” when they unveiled the Razer Stream Controller. Well, it turns out, that’s because it is. In fact, it’s a rebadged Loupedeck Live. As such, it uses the same marketplace, the same drivers, and sports precisely the same hardware – it just says “Razer” on the bottom. The reason I mention this is simple – this additional mainstream adoption helps expand the marketplace with additional development of apps, plugins, and profiles, which benefits everyone.

Back when I reviewed the Loupedeck Live S I mentioned that I use the tactile response of the analog knobs to mine in Star Citizen. In that game you dial in the laser’s power, eventually getting it running hot but not so hot that it causes it to overheat or explode the asteroid. Well, lo and behold that game still hasn’t shipped, and as such, I’m still using the Loupedeck family of devices to turn big rocks into little rocks. It’s still satisfying to physically turn that knob to dial it in, and I suspect that’s never gonna change.

Other than screaming through the inky blackness of space in Star Citizen, there’s also a lot to be said for enjoying the realism of flight. To that end, there is a third party plugin for Microsoft Flight Simulator. You can customize functions like lowering flaps, deploying landing gear, and signaling the tower. The analog can be used for trim if you aren’t using a trim wheel on a purpose-built flight control system.

While it’s not my particular bag of wheat, there’s a single-click install of icons and functions for Farming Simulator 2022. The little bit of time I spent with that game made it abundantly clear that it’s more complicated than any flight simulator, so don’t let the name fool you. You can drop in support for any game, really – you just have to map out each button individually and then optionally drop an icon on top. There are a lot of icon packs in places like Own3d.tv and Nerd Or Die, so you aren’t hurting for sources on those. 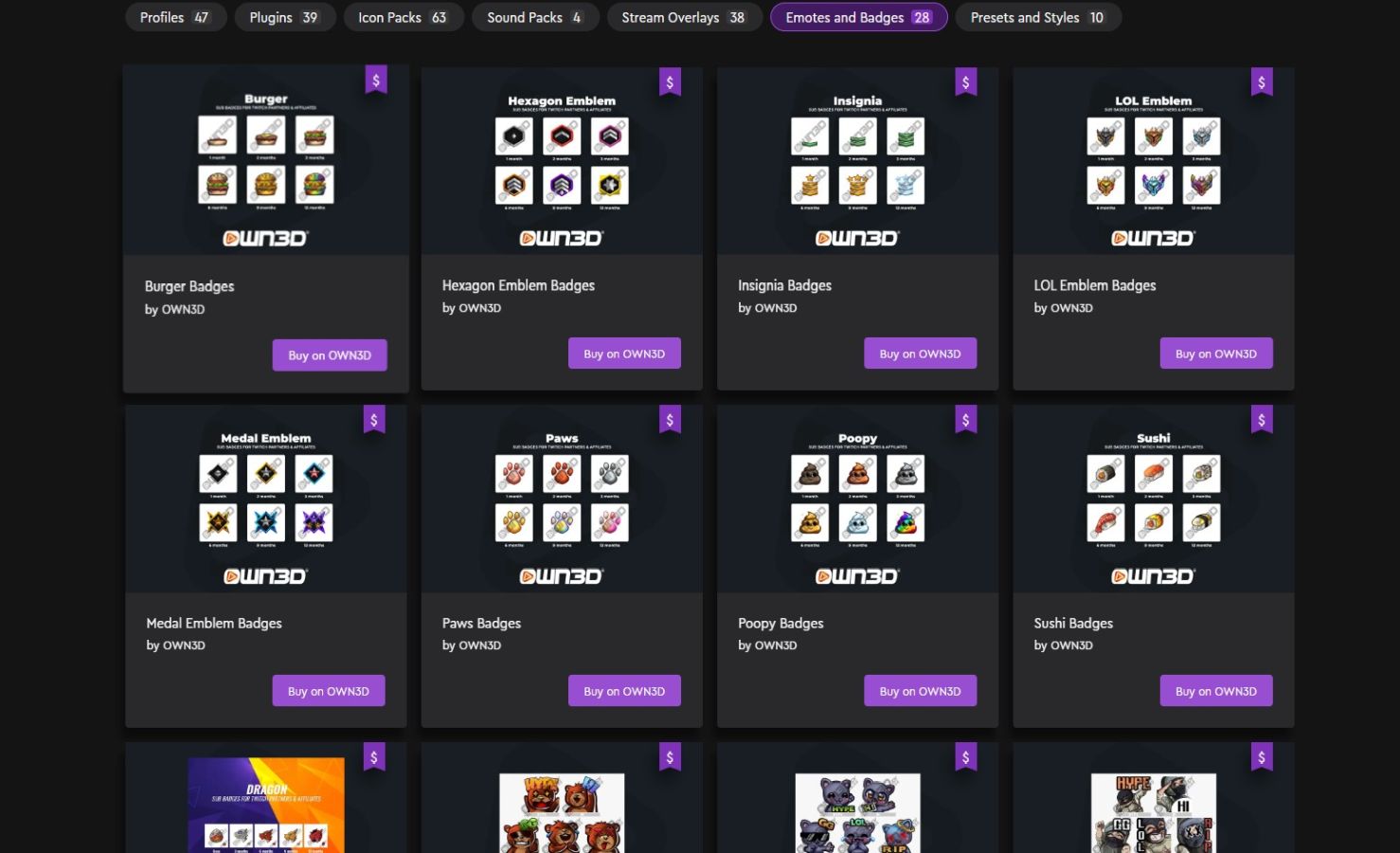 At the time of writing there are 35 plugins, 4 sound packs, 38 stream overlays, 28 emotes and badges, and 10 presets and styles that you can download from the Loupedeck Marketplace. Most of these are coming from third parties – a subject we’ll return to later. It should come as no surprise that plugins for Twitch Studio, VLC Player, and Razer Key Light Chroma are ready to go at launch. You’ll also find ones for Streamlabs, Philips Hue, Twitch, Elgato lighting controls, and OBS, just as a sampling. I was very happy to see VoiceMeeter as that software is the go-to virtual mixing board for independently controlling all of the various inputs and outputs on your device.

If you are thinking you don’t stream so you won’t have much use for the Loupedeck Live S, well, think again. Many of us are working from home, and let me tell you that having a hardware mute button and volume control is invaluable. Better still, if you set up the icon to show a “no” icon, you can be assured that you are muted for that monster burrito belch you’d otherwise blast across that very important business meeting.

Kidding (but not kidding) aside, there are a number of Windows functions that are made better by having a visible toggle outside of the OS. Naturally you can program any button press, mouse click, or other functions and drop them onto a button on the Loupedeck Live S. I’ve got volume controls, camera toggles, mute, show desktop, and toggling between desktops. Beyond that, I have various programs that I use frequently mapped so I can launch them at the press of a button. The Dynamic mode on the Loupedeck devices allows it to pull in and activate the buttons associated with that selected program upon load. This means you’ll instantly switch from Windows shortcuts to, say, DaVinci Resolve without the need to poke at menus or toggles.

Truthfully, my primary criticism with the device or the software is a hold-over from its predecessor. The Loupedeck team really needs to devote software cycles to building out a variety of plugins, presets, and profiles. To really make the Loupedeck family of devices catch fire, they need to invest in making it flexible, powerful, and integrated with more than what we have today. I say this as the list hasn’t grown significantly since I reviewed the Loupedeck CT. Direct integration with, for example, Final Fantasy XIV: Shadowbringers would make 40 million people happy. World of Warcraft: Dragonflight just launched, and direct integration would help another 122 million folks take to the skies. Elite Dangerous, Microsoft Flight Simulator 2020, Assetto Corsa, F1 2022, War Thunder, World of Warships, World of Tanks, Train Sim World 3, No Man’s Sky, are just a handful of simulations that would directly benefit from a secondary physical panel. Games like Dinkum, Factorio, Satisfactory, Farming Simulator 22, Kerbal Space Program, would be better with some pre-programmed shortcuts. I think we’ve got a solid selection of productivity suites, but the game side is lacking. This is an area where Loupedeck could likely spend less than a week’s worth of man hours and art assets and yield a significant win in terms of new and returning customers. Yes, it’s simple to build them yourself, but it’s better when an expert does it and you can install it with a single click. 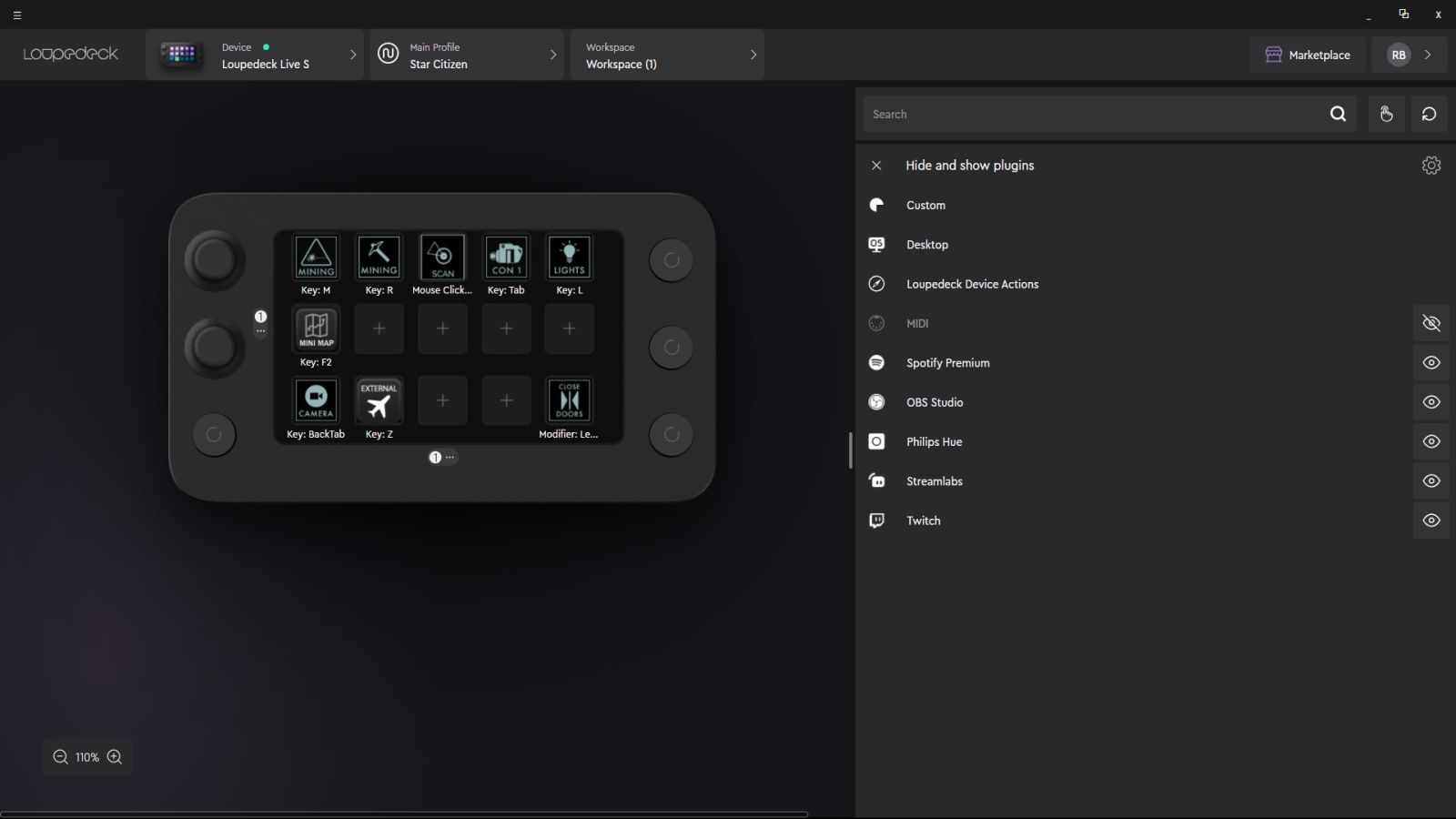 In the end, I was surprised that I didn’t mind trading the dials and buttons for more screen space. I expected that I’d find something where I’d miss the extra rotaries, but with two at my fingertips, and with the rubber coating, I was covered. The additional screen real estate on the other hand was greatly appreciated. You can still swipe between screens, and now you have 15 slots per screen to use. You can set your primary four to the physical buttons if you are inclined, and that leads to the greatest strength of the Loupedeck Live S.

Everything I’ve written is just my use case. Your use case might be completely different, and that’s perfectly fine because the Loupedeck products don’t care. You can map any button, screen, or knob to anything you want. If you want to replace the Windows key with a button, go crazy. Want to map center mouse click to the knob press? Yep – done. Whatever you can imagine, including macros and multi-presses, can be mapped to anywhere on the device you’d like. You can even run scripts if you need. The flexibility of the device is limited only by your imagination. It’s all drag and drop via the interface, so whatever you choose is going to be easy to program anyway. 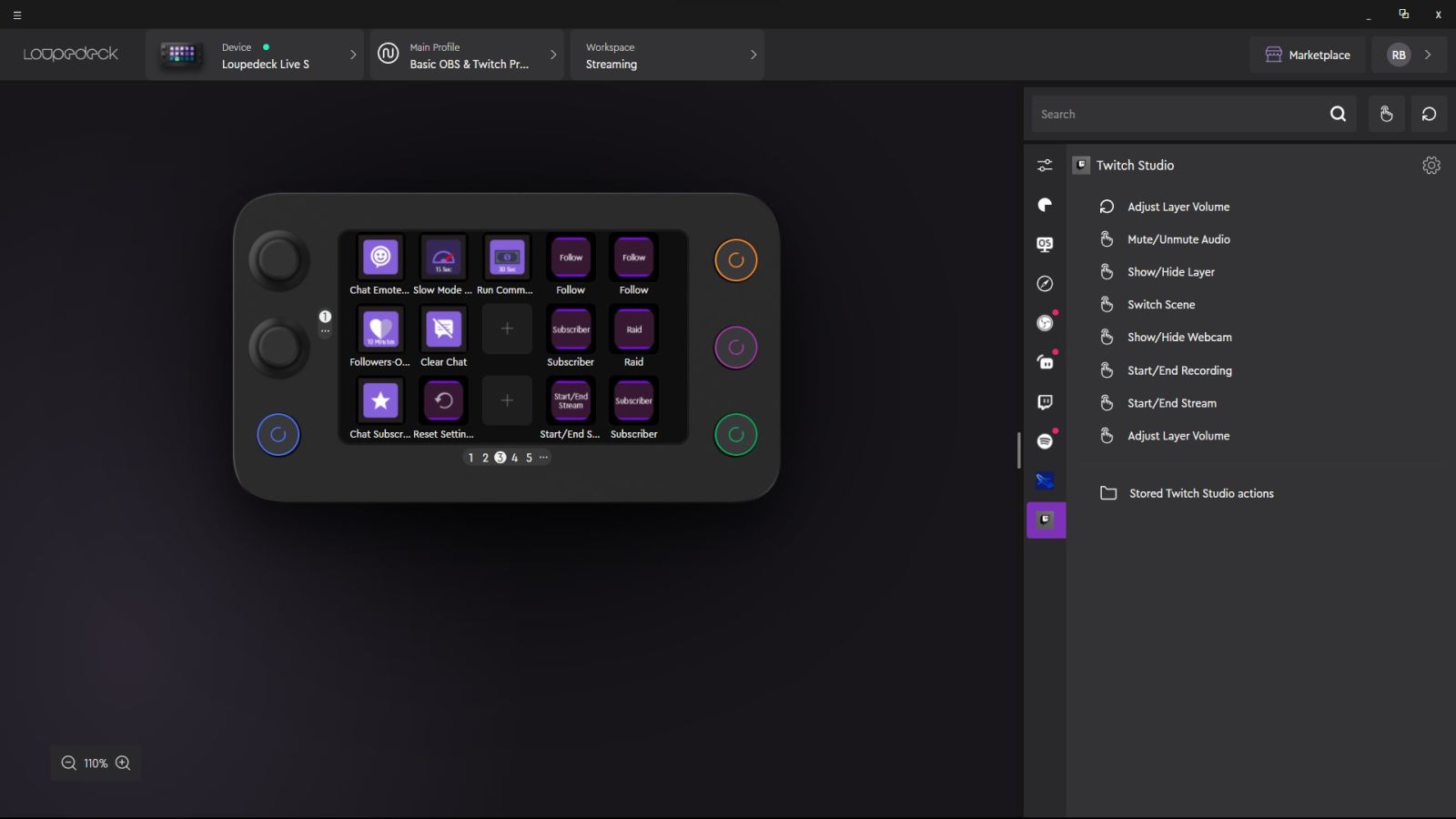 Of note, there is a one year warranty on the Loupedeck Live S, and frankly that feels light. Granted, my CT and my original Live haven’t faltered and that’s been well over a year at this point. Still – it’s worth noting.

The last topic is always the contentious one – pricing. I’m not here to make value judgments, but instead I’ll directly compare it against the Loupedeck’s competitors. The Loupedeck Live S will set you back $179. A standard Stream Deck from Elgato is $149, and their new Stream Deck+ with four knobs and eight buttons and a small strip screen on it is $199. This puts the Loupedeck smack dab in the middle of both. Given that it has the best parts of both and at a lower price is just icing on the cake. You’ll have to look at your use case to see if this matches your expectations. For me, it’s a no brainer.

A slimmer combination of the Loupedeck CT and the Loupedeck Live, the Loupedeck Live S is a fantastic workflow addition. Whether you are streaming, or just need something to make your editing and productivity better, the Live S has what you need. Sure, it’d be nice to have more gaming focus, but at least you can roll your own.

Ron Burke is the Editor in Chief for Gaming Trend. Currently living in Fort Worth, Texas, Ron is an old-school gamer who enjoys CRPGs, action/adventure, platformers, music games, and has recently gotten into tabletop gaming. Ron is also a fourth degree black belt, with a Master's rank in Matsumura Seito Shōrin-ryū, Moo Duk Kwan Tang Soo Do, Universal Tang Soo Do Alliance, and International Tang Soo Do Federation. He also holds ranks in several other styles in his search to be a well-rounded fighter. Ron has been married to Gaming Trend Editor, Laura Burke, for 21 years. They have three dogs - Pazuzu (Irish Terrier), Atë, and Calliope (both Australian Kelpie/Pit Bull mixes).
Related Articles: Hardware, Loupedeck Live S
Share
Tweet
Share
Submit