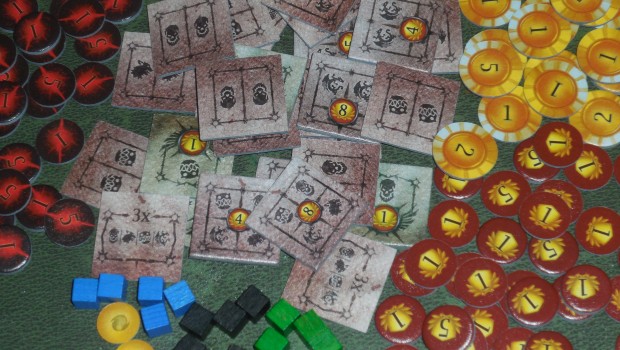 I was so excited about Lost Legends that I begged for a review copy at GenCon, unsucessfully. I love the fantasy setting. Drafting for items is a great idea. Then slaying monsters. Add to that the high production value of Queen Games, and this should have been my game of the year. Why did it fall short?

The quality of the cards and boards is good. My only complaint is that the artwork on most cards is pretty dark color-wise. I would have preferred more color, but the dark tones match the dungeon crawling theme.

How to Slay a Dragon

You and your friends are journeying into the three levels of the dungeon to slay monsters and gain glory. At each level you draft cards to gain equipment and then fight monsters. The equipment gets better as you move deeper, and the monsters get harder. No map, no wandering around. The game is just drafting cards, then fighting monster cards, repeated three times with increasing power and difficulty.

The game starts by picking a character to play who already has some skills and starting money shown on the hero board. During the gear-up phase, deal the equipment deck evenly between players. The players will pick up the hand of cards in front of them, choose a card, and then the pass the rest of the cards. Players then add the card to the appropriate area of their player board. Cards can be weapons, armor, spells, and artifacts; equipping these cards costs gold.Cards can also be inverted to add characters skills and earn gold. Once everyone has added their card to an equipment slot or skill area on their hero board, then players pick up the stack that was passed to them, pick out a new card, and the pass the rest. This repeats until the last card, which is discarded instead of passed.

The combat monsters phase now begins. Before the gear-up phase players received a one monster, but there also a stack of additional monsters which must be defeated. Players fight the monster in front of them, and then replace it with another monster from the deck of additional monsters until the deck is gone. Monsters have weaknesses and resistances to certain kinds of damage.

The player deals damage based on his weapons or spells, then the monster gets a chance at retribution. Monsters also have additional attacks, damage, or effects specified on the card. When a monster is defeated, thanks to the player dealing enough damage over a few rounds, the player is granted experience points and gold, though the money is distributed around the table. Experience points allow you to level up your character by increasing your hit points, your mana, or gaining two gold. Trophies, worth victory points, can also be earned for killing certain types of monsters or more of a type of monsters than other players. Once the last monster is engaged one more round of combat commences. Combat also ends if all of the characters are dead. Then the next level of the dungeon begins with an equipment draft.

The fantasy setting really shines through as you gear up a fantasy character and then fight waves of monsters. The art for the characters, equipment, and monsters is great. Seeing that dragon appear and looking down at only your longsword is an intense experience.

The drafting makes Lost Legends a lot of fun. You’ll agonize whether to take the sword now or hope that it comes back around. Stick it to your opponents by drafting what they might want. If you like drafting games like 7 Wonders, then you should try this game.

I enjoy the drafting phase, but the combat monsters phase is a letdown for several reasons. The randomness of the monsters overwhelms much of the decision-making. The monster you must fight is random and hard to replace, which is frustrating when you can’t defeat it or you know you will quickly be killed. Some monsters are immune to most damage; others ignore armor. Each monster deals different kinds of damage so that you can’t block everything.

I expected tension between specializing and generalizing, but the monsters punish specializing. For example, you might get the chance to either replace your weak sword with a better one or gain a weak bow in addition to keeping your weak sword. Always get the weak bow! You might face a monsters immune to melee damage and no matter how big your sword, you will die without a bow.

The scoring is more like counting beans. Trophy markers get traded around the table constantly granting both permanent and temporary victory points. In addition, there are other trophy markers related to the kinds of monster you defeat, so you need to keep track of that too. Both of these might be interesting if you could influence the kind of monsters you fought, but what little control you have you expend on getting a monster you can beat, not worrying about the type of monster. The trophies reward the player who got lucky: the combination of monsters he could beat happened to earn him trophies.

Who Can You Play This With?

This is a medium-weight game. Calculating damage and keeping track of money for drafting means a bit of math. The planning needed to draft cards also takes some brain power. Your board gaming friends will enjoy this, but non gamers or casual gamers will not enjoy this game.