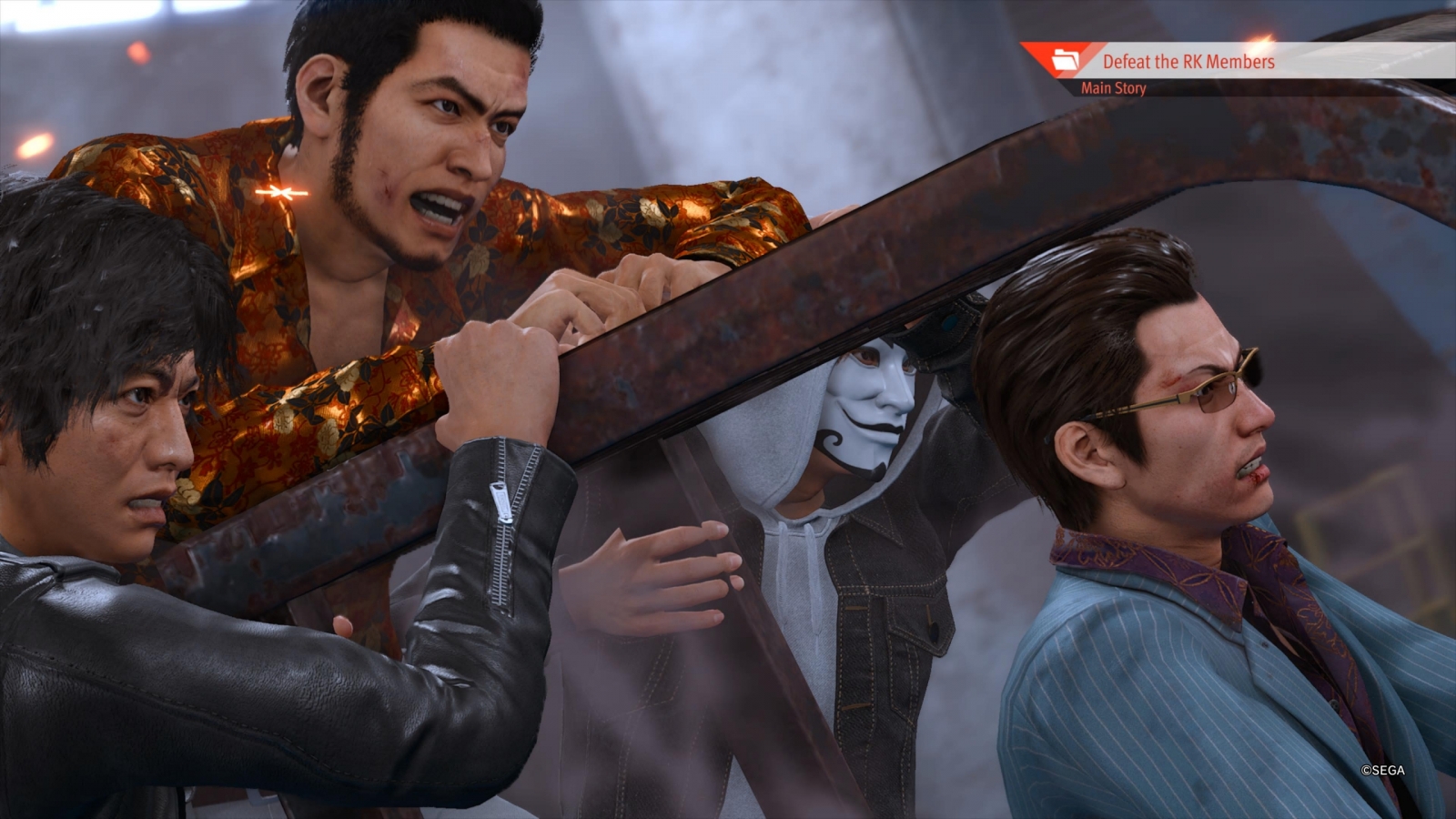 In Japan, 300 students commit suicide each year. While it can’t always be proven, many of these cases can be linked to bullying. The father of one of these children is Akihiko Ehara, a police officer currently on trial for a groping case. Just before his guilty verdict is handed down, he has a surprise to reveal before the court: an unidentified body was discovered three days ago in Ijincho. That body, he informs the court, belongs to 22-year-old Hiro Mikoshiba, a current student teacher who bullied Toshiro, Ehara’s son, to death four years ago. The estimated time of murder was at least two months ago, the exact time Ehara would have been commiting the groping. So if Ehara couldn’t be the one getting revenge for his son, who was the murderer?

Takayuki Yagami is a lawyer turned detective working in Kamurocho, Tokyo. He and his partner, a former Yakuza with the Tojo Clan named Kaito, often get jobs from the Genda Law Office, Yagami’s former employer, who just so happen to be Ehara’s defense in the groping case. Meanwhile in Yokohama, two of Yagami’s friends, Makoto Tsukumo and Sugiura, have established their own detective agency: Yokohama 99. The pair ask for Yagami’s help on a case involving bullying at the local high school. But what might begin as a simple investigation on the surface quickly expands to involve the government, street gangs, and the failure of the entire justice system in Japan.

Lost Judgement is a sequel to 2018’s Yakuza series spinoff, Judgement, set three years after the original. After Yakuza 0 and Like A Dragon, the series has never been more popular. With the main series moving on to turn-based combat, Judgement continues the action oriented brawler style alive while adding its own detective spin. In between fist fights, you’ll be sneaking around, picking locks, donning disguises, and even parkouring your way around Kamurocho and Yokohama. While Lost Judgement plays mostly like the 2018 title, there are a few new additions like the Snake style.

Originally, Yagami only had two styles in combat: Crane for multiple targets, and Tiger for single target. You can read our review of Judgement to learn more about those, as they function almost identically, but Snake tries to fill a hole in the detective’s repotrire, namely countering enemies with weapons. By pressing guard (L1) just before an enemy attack connects, you can parry them, potentially disarm them, and leave them vulnerable for you to transition into your powerful combo. If that sounds overpowered, it is! While I did play on Easy this time around, I almost never switched back to Tiger or Crane because Snake is simply better than the two of them. 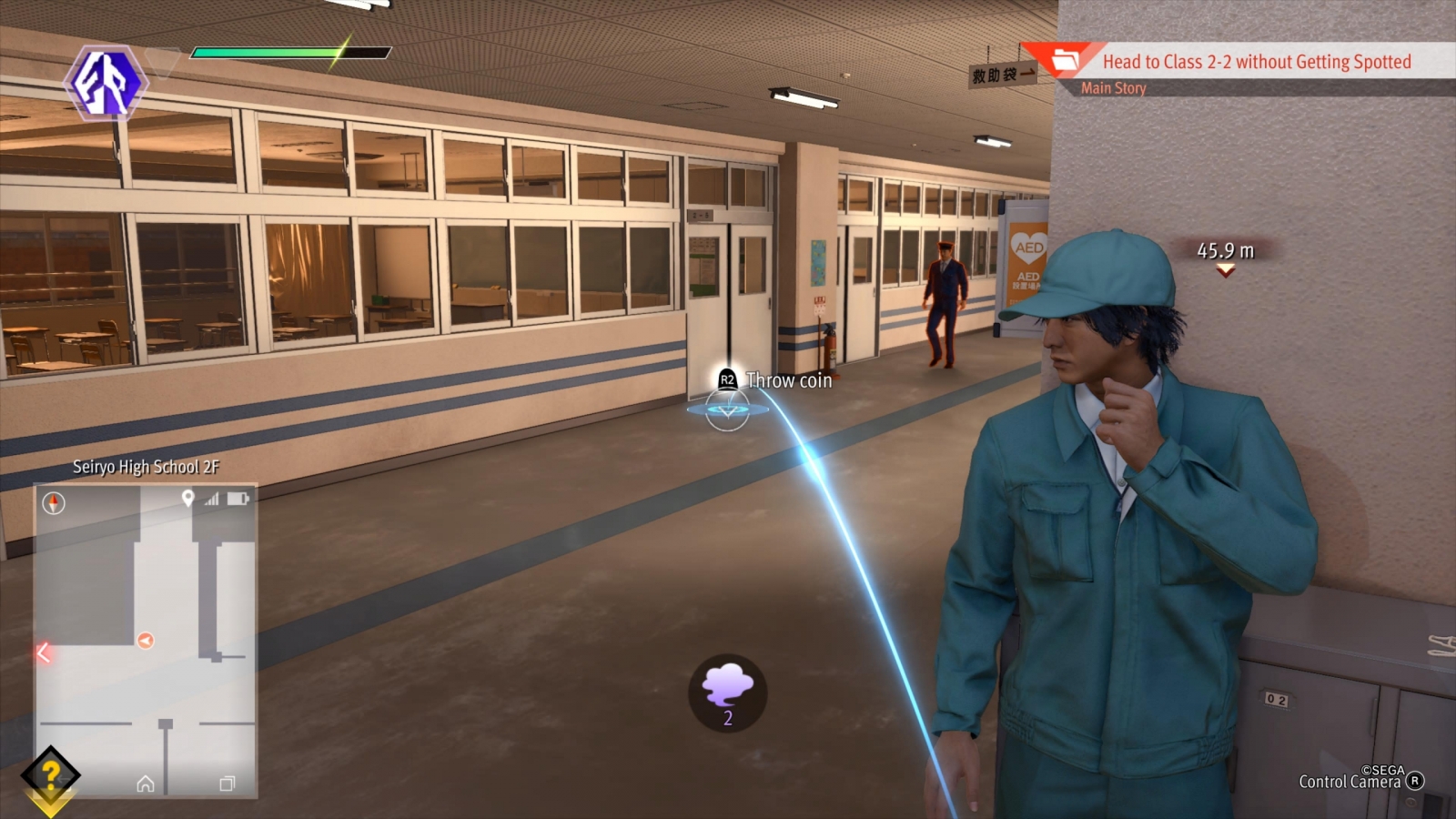 While being able to parry any attack makes you theoretically invincible, Snake’s rush combo and finishers are the real stars of the show. They’re quick, hit hard, and even if an enemy is guarding your finisher’s transition automatically into a throw and from there you can use an EX attack to finish them off, if they even have any health left. This does make combat much, much easier than previous games in the franchise, but it’s still just as fun and combat isn’t really Lost Judgement’s focus even if you engage in it quite frequently.

Instead, a lot of your time will be spent investigating either through the main story, side stories, or in the new school stories. The main story is as excellent as ever and presents a mystery that’s enjoyable to puzzle your way through, if a little too linear in its execution. Just like the first game, you can only use certain investigative techniques exactly when the game tells you to, so the new mechanics like parkour and other returning gameplay modes like the first person investigations feel a bit too rigid. While I don’t need Elder Scrolls levels of freedom, it would be nice to be able to break these out at my choosing instead of the game telling me I’m allowed to climb the building now after spotting the parkour route five minutes ago. 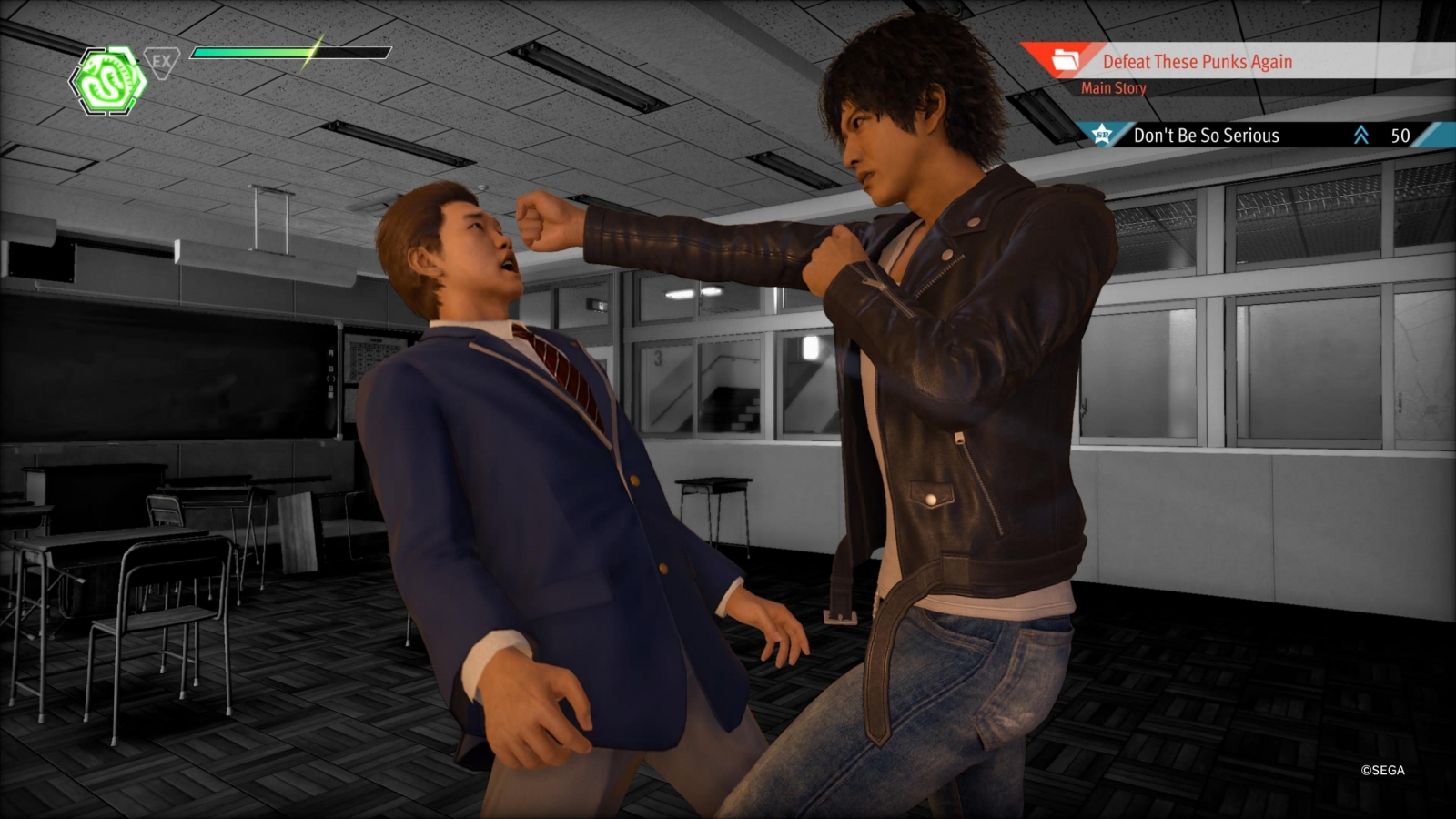 My only other problem with the main quest is that the high school aspect is dropped very suddenly and only comes back in the finale in favor of the more traditional crime focused story. Of course, if you want more of that you can play the school stories, but I enjoyed the way the plot had intertwined with this fresh perspective of being a teacher/mentor to these kids.

While the stakes are much lower, that’s exactly what school stories gives you. To get more information on bullying, Yagami becauses the councilor for Seiryo High School’s Mystery Research Club, or MRC for short. He and the club’s president/only member, Kyoko Amasawa, begin by investigating a link between the RK street gang and one of the Dance Club’s members. The student in question is using someone from RK as a sugar daddy, which could get her killed if she doesn’t break ties properly. You know what that means… Time to join the Dance Club! School stories will lead you to a lot of hilarious situations, like a dancing minigame, but it also has a lot of heart that lets it stand alongside the mostly serious main plot. In particular, Amasawa is a great contrast to Yagami’s more cynical attitude. She’s just super excited about mysteries and helping people, so she often finds herself in over her head. I hope these kids stick around for future games. 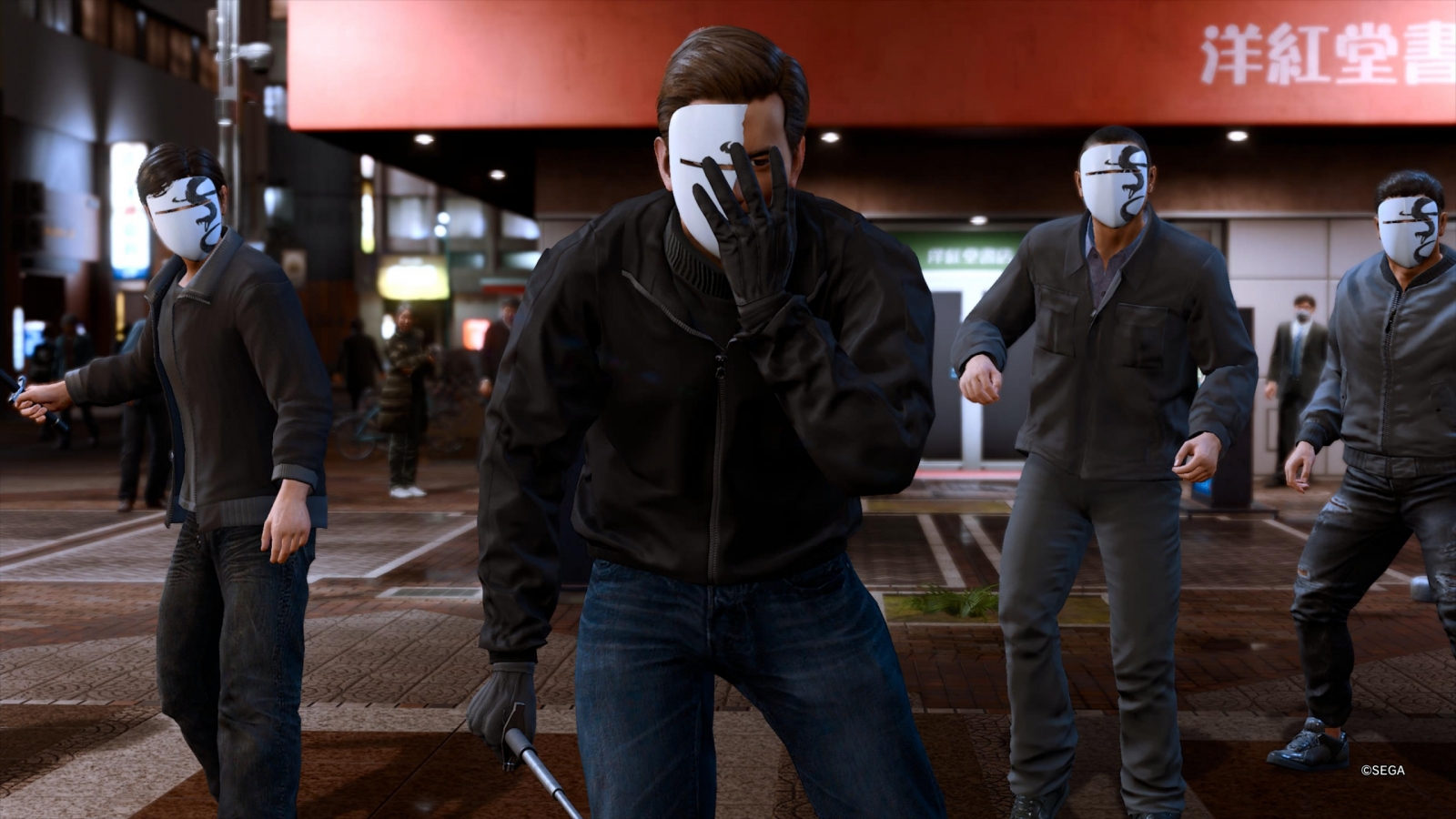 Sadly the future of Judgement is unknown, as the agency for Yagami’s japanese actor has been in disputes with SEGA over PC ports. I love Yagami as a character, particularly his English actor Greg Chun, and this story challenges him in very interesting ways that could be further explored if the series were to continue. If it does continue without Yagami, I’d like to see Saori step up as a new protagonist. She has a much bigger role here and her character is more fleshed out; she’s just enjoyable to watch take the lead in some aspects of the mystery. Her VA, like everyone else in the game, knocks it out of the park and conveys the quiet determination Saori possesses.

While the voice acting is as excellent as ever, the visuals have seen some improvement from my complaints about the first game’s PS5 port. Some of the harsher shadows have returned, but contrast is overall lower than the original PS4 game. This gives it a slightly more noir look than Like A Dragon, which used both Kamurocho and Yokohama as locations, but I would still like to see the spinoff go for a bolder, more distinct visual style if possible. Maybe that will happen when the studio fully commits to current gen consoles, but I also say this because I desperately want to see what the neon streets of Kamurocho would look like with Ray Tracing. 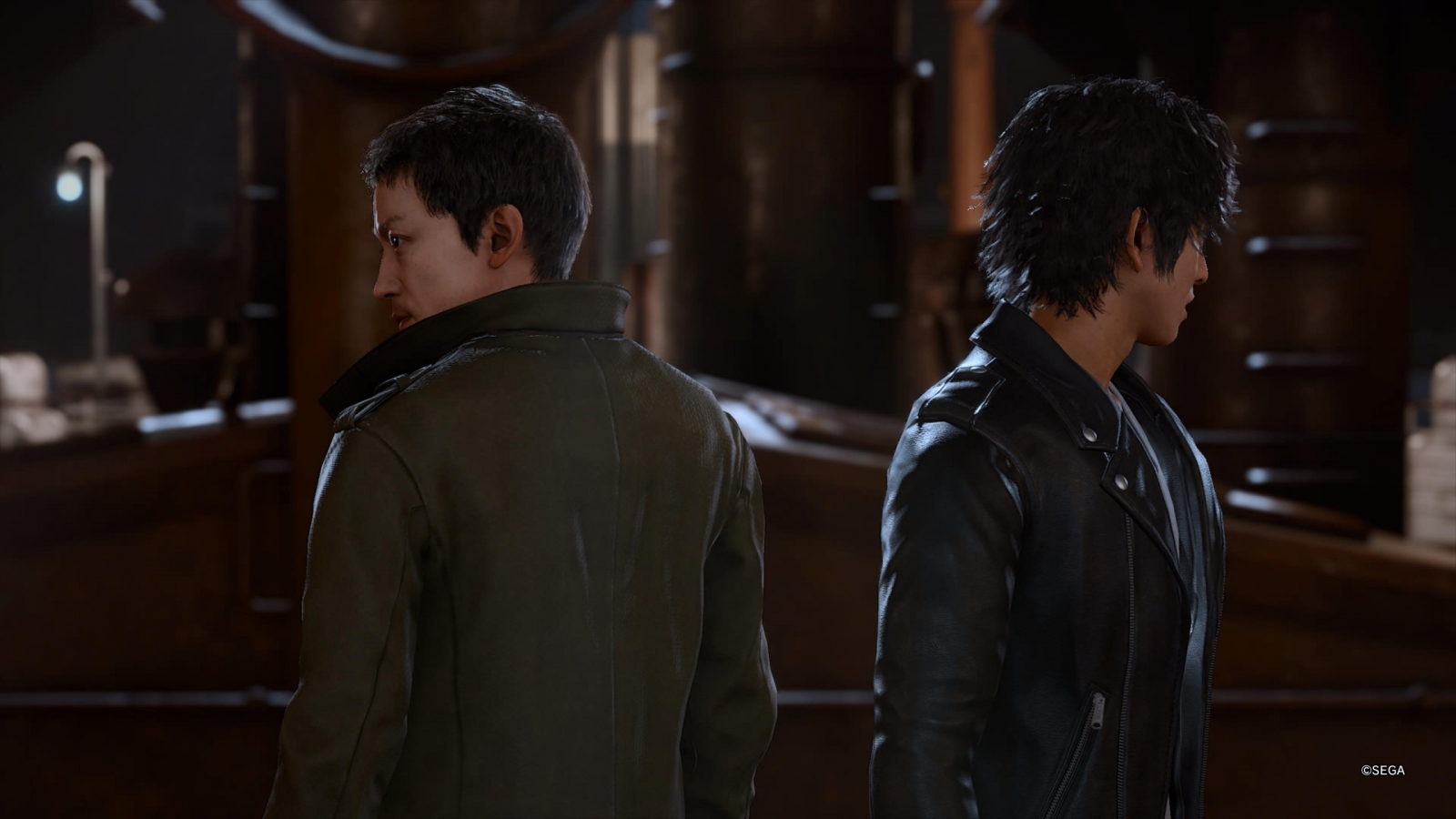 The visuals might be the same old same old, but the music really brings that investigative vibe that sets Judgement apart. Tracks in cutscenes always set the mood perfectly, and each of the battle tracks for the different styles rock. While you may be listening to Snake’s theme a majority of the combat encounters, it never got old for me. While I don’t think I would listen to any of these outside the game itself, they all work very well in the context of the game.

Lost Judgement is a small leap forward for the Yakuza spinoff series. While I would have expected a bit more from a sequel, what’s here is still just as enjoyable as the first game, if not more so. The highschool additions are a novel look at the often used Japanese setting, while still focusing on the crime drama and investigation fans love.

David is the kind of person to wear his heart on his sleeve. He can find positives in anything, like this is a person who loved Star Fox Zero to death. You’ll see him playing all kinds of games: AAAs, Indies, game jam games, games of all genres, and writing about them! Here. On this website. When not writing or playing games, you can find David making music, games, or enjoying a good book. David’s favorite games include NieR: Automata, Mother 3, and Gravity Rush.
Related Articles: Lost Judgement
Share
Tweet
Share
Submit