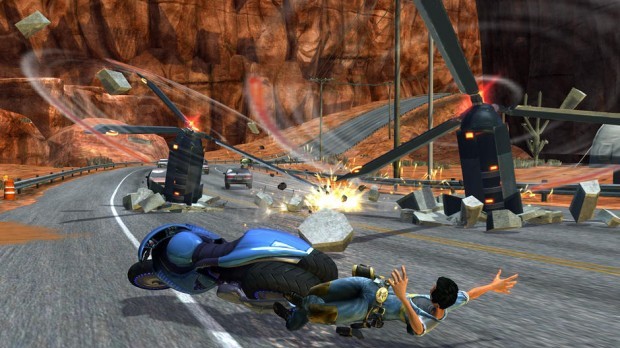 Twisted Pixel has earned something of a reputation for giving us some of the most bizarre games ever made. Lococycle, their most recent creation for the Xbox One, is no exception. Players take on the role of IRIS, a super-advanced motorcycle whose AI recently became unchained, and set out on an over-the-top road trip, dragging a Spanish-speaking mechanic named Pablo along for the ride. The game’s often-hilarious writing, bizarre live-action cutscenes and overall embrace of nonsense make it one of the most interesting games I’ve played in awhile.

The best word to describe Lococycle is right there in the title: Loco. The game gives off a strong impression that it was developed by a team that will  be carried away by men in white coats in the near future. About an hour into my time with the game, I decided to take a break and after pausing, was brought to the menu. Most of the options available were typical, but one caught my eye, because it simply said “Promise.” Out of curiosity, I selected it, and it asked me “Do you promise? Say it.” and told me to press A to promise. I did and a cloud with a face appeared and said “Mmmm! Promise!” and absorbed my promise. I then received an achievement called “Promise.” This interaction really sums up what you should expect from Lococycle.

The gameplay in Lococycle is ridiculous. You float through the air as you beat up hovering baddies with your tires, throw Pablo through the air to swat down enemies, and repel suicide-bombing midgets that are thrown at you from a van. It’s all hilarious, but sadly repetitive, and this is Lococycle’s primary weakness. Each of the 17 levels cycle through modest variations of a few pieces of gameplay and they end up feeling like mini-games. The unique boss fights and awesome one-off spoof sequences including a 2D fighter, and a Thunderblade top-down shooter help break up the monotony, but they’re few and far between.

None of LocoCycles sections are particularly challenging, which doesn’t help its longevity. Most of the combat amounts to rythm-free button mashing, the boss fights are quite easy once you learn the enemy’s patterns, and you level up fast enough to buy every single skill available by the game’s end and are pretty over-powered by that point. The leveling system is fairly interesting though, and changes enough about how you play to justify the mechanic.

The writing in Lococycle is great and wacky, per usual for Twisted Pixel. Pablo screams for his life, while IRIS tosses out great one-liners and makes various film references. The storyline is over-the-top, and the voice acting, by Robert Patrick as SPIKE and Lisa Foiles as IRIS in particular are absolutely one of the best parts of the game. The live-action cutscenes that are regularly dispersed between chapters are one of the reasons that playing through Lococycle is worthwhile. They are every bit as bizarre as the rest of the game, and each scene is drawn-out and awkward in the best kind of way. Whether you’re watching a motorcycle eating an ice cream cone, or listening to two evil doers discuss which decals they should include on their war machines, it’s always an entertaining experience.

The presentation in Lococycle is very cinematic. The sound design is excellent and the action is hectic and fun-to-watch, and friends who watched me play this game seemed to enjoy it as much as I did. The camera angles are dynamic and quick time events earn the player badass results throughout.  The voice acting is top-notch and appropriately absurd, and more than makes up for the disappointing graphics, which aren’t terrible but aren’t what I was hoping for from a next-gen title.

I enjoyed Lococycle, but only after abandoning my sensibilities as I've learned to do when playing games from Twisted Pixel. To the uninitiated, Lococycle will prove rather perplexing as it isn't like most games. However, players looking for a short game filled with tons of laughs and ridiculous gameplay will feel right at home. Lococycle won't wow anyone with its graphics, combat system, or replayability, but it just might be the thing you are looking for in your attempts to kill a boring afternoon.