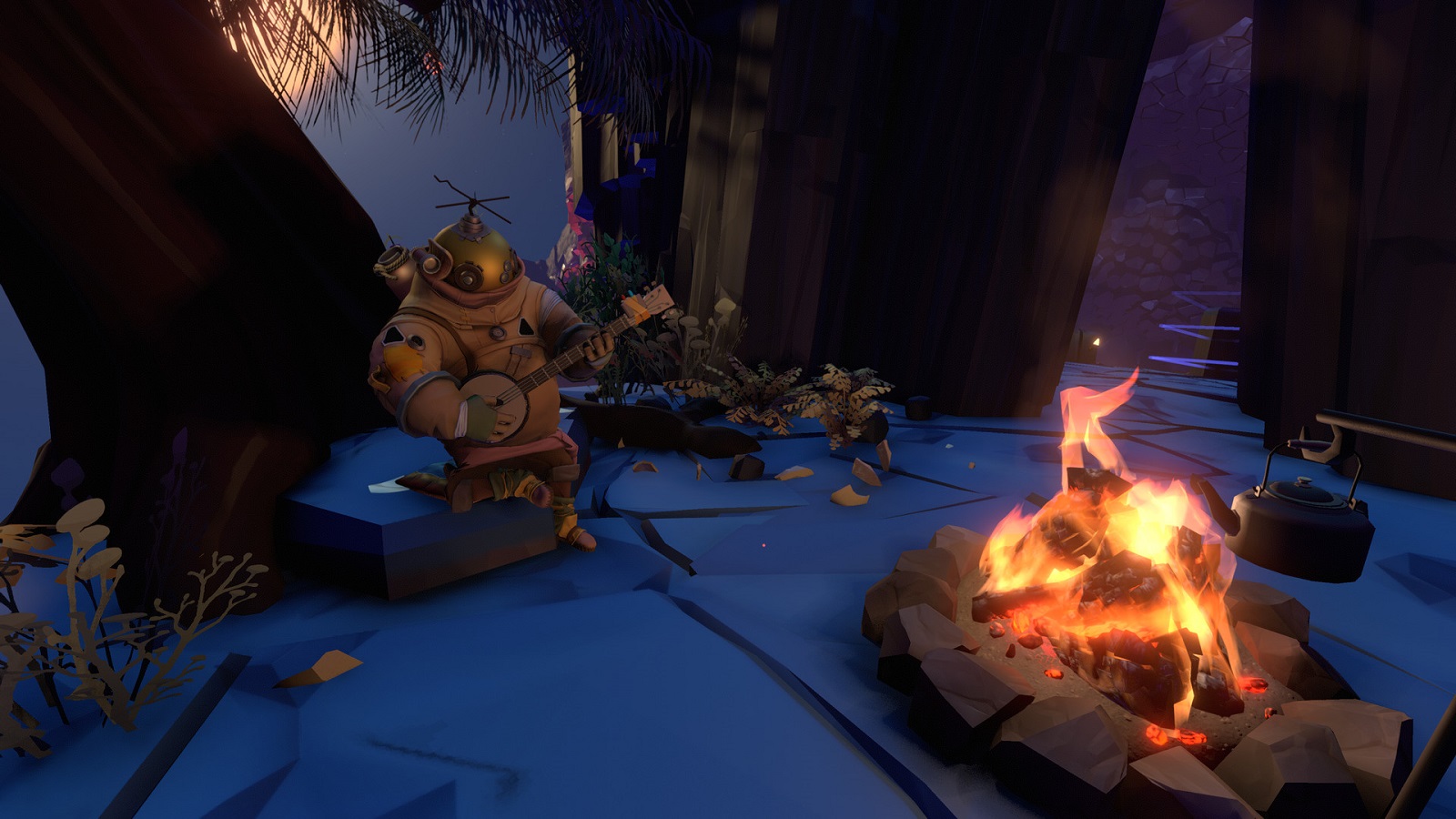 Every kid yearns to play amongst the stars, to fight winning battles against the cosmic unknown and come out smiling. Every day and every thing is an adventure, but as you grow old, where does that childlike wonder go?  For the folks at Mobius Digital, it hasn’t gone anywhere. It’s a shame that mankind’s spacefaring days have yet to arrive, but until then, Outer Wilds will more than suffice.

The adventure begins with an explosion over a distant planet. The player wakes up as a young recruit of the Outer Wilds Ventures space program, ready for their first extraterrestrial outing. Upon securing the launch codes for their ship, the game lets go of players’ shoulders and from that moment on, it’s their journey. With the makeshift, treehouse-esque spacecraft out of orbit, every planet in the solar system is ready to be explored. Twenty minutes later, by forces unknown, the next adventure begins with an explosion over a distant planet. It’s up to the newest recruit of the space program to solve the mystery of the ancient Nomai civilization and put an end to cosmic Groundhog Day.

Outer Wilds presents a small, handcrafted solar system armed to the metaphorical teeth with tricks and surprises designed to blow the socks off of any wannabe space explorer. There’s something truly liberating about the ability to fly to a distant planet and land with no loading screens. Then, once the ship hits ground and the spacesuit is on, the game is unstoppable. Each celestial body comes with its own quirks, whether that be lower gravity, strong winds, a wormhole, et cetera. They’re littered with areas to explore, lore to discover, and puzzles to solve—all contributing to a complete history of the body’s visitors and inhabitants. Of course, the obvious comparison is to No Man’s Sky, but also to sailing the seas in Wind Waker, or even visiting one of the many oddball planets in Super Mario Galaxy if I’m allowed a few personal picks. Players can always count on things being more than what they seem. Even then, Outer Wilds finds a way to surpass those expectations. 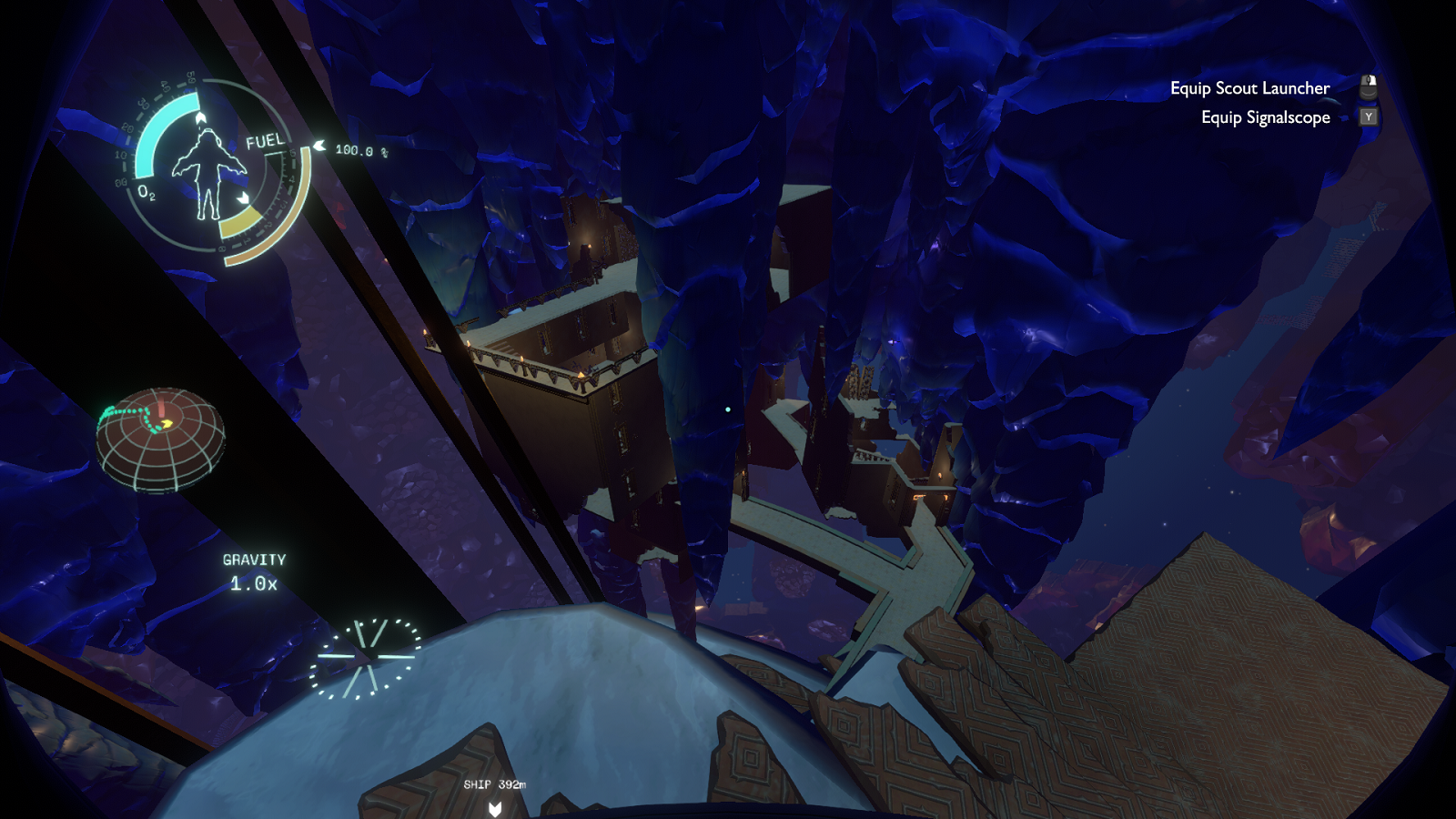 The first few hours, before exploration becomes a tad more deliberate, are spent stumbling around the solar system, picking up loose clues and seeing odd sights that don’t quite mean anything just yet. As information piles up, the ship’s rumor map, automatically updated as new data becomes available, serves as an investigation board to help players parse through details and plan out their next move. Players chase after micro-goals, which feed into larger and larger goals, but it never becomes too overwhelming nor contrived, thanks in part to the well-organized and concise presentation, but is largely credited to the focus on nurturing players’ intrinsic motivation to discover.

Whether you’re scanning for distress signals or delving deeper towards the core of a planet, the joy of discovery is the game’s greatest reward. Outer Wilds features no inventory system, no micromanaging of any resources, and few overt progress gates that demand a certain power-up or sufficient story progress. Players are free to discover whatever whenever with little restrictions. The game is also cleansed of any unsavory elements like checklists attached to the UI, or any currency or experience systems commonly tacked onto similar games which may divert attention elsewhere. It relies on its effective level design, strong visual storytelling, and engaging worldbuilding to encourage players to continue exploring. In fact, the solar system itself is set up to be as convenient to the player as possible. Planets are easy to identify, certain relationships between celestial bodies can be quickly understood and used to navigate or gauge metrics like time passed, and their positions make it easy to detect signals from key locations.

Outside of the ship, where players will need to be in order to explore planets and/or repair the ship, players are outfitted with a few simple, tools: their trusty spacesuit with its rocket thrusters and limited oxygen and fuel, a probe gun to scout areas among other things, a translator for Nomai text, a flashlight, and a signal detector. It’s through this small selection of basic tools that the player interacts with the world. Outer Wilds has top-notch level design and visual telegraphs; the environments help nudge the player towards the correct locations or solutions. It’s not a matter of unlocking the proper upgrades and traditional forms of progression, the game promotes lateral thinking—using what players already have at their disposal to interact with their environments in ways they had not thought possible, informed by other locales and obstacles they may have visited prior. Save for a few (very forgiving) time-sensitive endeavors, there’s no reason to rush, and with the sheer number of exploratory prospects available at any given time, players are never made to feel in the wrong for marching to the beat of their own drum. 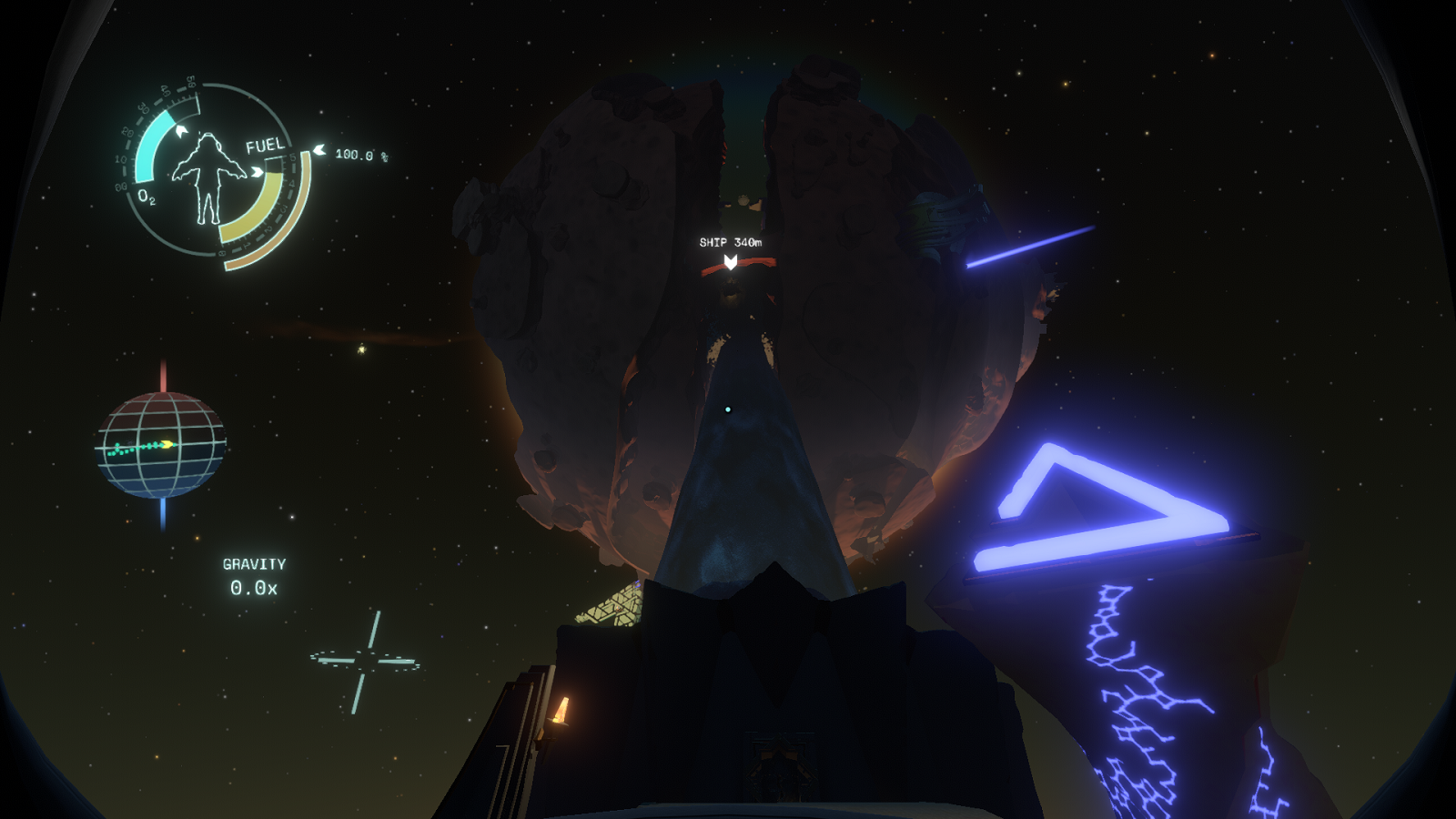 Outer Wilds’ crisp, colorful visuals and sound palette coupled with a few, simple musical slices add the appropriate spice needed to set the mood of an area, whether that be the cozy, serene safe spots or the more ominous and mystical anomalies. Even on the most desolate of places on the outskirts of the solar system, the art and sound design stay equally strong, giving players the sense that there’s always something to discover—that they’re always on the right track. With gorgeous vistas all around, the game provides a constant stream of sensory fulfillment no matter where the player looks, as to reward even the most curious of explorers.

The only noteworthy complaint is that, as the game enters its second half, progress dramatically slows without much in the way of hints to keep the wheels turning, even if slowly. The rumor map, as comprehensive as it is, will not pin-point exactly what needs to be done, an option players may be wishing were available when progress stagnates for considerable stretches of time. The occasional obscurity of the objectives is almost jarring, disrupting the pace that players have grown acclimated to. This results in moments where wandering aimlessly seems to be the only option. This is especially brutal since that first playthrough of Outer Wilds feels very much like a 100% completion run—what tiny thing am I missing and where could it possibly be? For many, discovery isn’t enough, puzzles aren’t enough, and for those players, it might not be worth fighting through the low periods.

At the end of the day, this game appeals to the explorer, the player who seeks out new things for the sake of doing so, and it caters to said player in every way it possibly can. Any player itching for a new game to take them on a few creative adventures can safely bet on Outer Wilds.

A tale straight from our childhood tree forts—Outer Wilds will reawaken the passion for exploration that you thought you lost.

A self-deprecating, overly sarcastic pair of glasses that occasionally possesses a human host in order to partake in the delightful process of playing video games, then immediately complaining about them. When he is not playing games (a rare occurrence), he can be found either writing about things that no one cares about, or haunting the quiet streets of his Canadian suburb.
Related Articles: Indies, Outer Wilds
Share
Tweet
Share
Submit