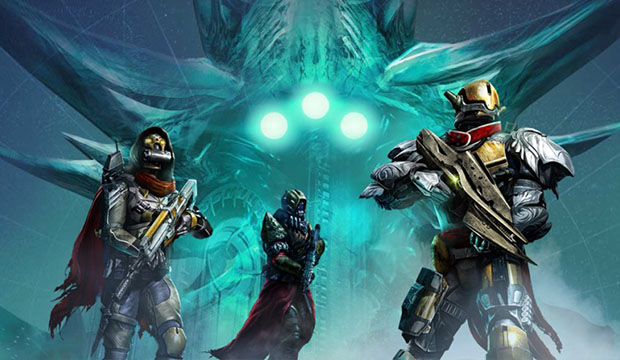 Neither of us were exactly anticipating The Dark Below with excitement. It’s better to say we looked forward to it with curiosity. When the original vanilla release of Destiny launched earlier this year we were hoping Bungie would consistently make good on its promise to keep us invested. It was supposed to feel fundamentally boundless and get us excited to explore countless new scenarios.

While it’s an undoubtedly a fun FPS to play,whether or not Destiny has lived up to its, perhaps, unreasonable expectations is debatable and similar arguments can be made both for and against it’s first expansion. On one hand, to say that The Dark Below let us down is far too harsh, but on the other, to say it landed far and away from our combined expectations would be an understatement.

The campaign elements that The Dark Below brings to Destiny, in its current form, are brief and slightly haphazard. The lack of a dedicated cinematic or even a cut-scene dilutes whatever emotional investment you could potentially have, and while Eris’ presence in the tower and pretty cool character design are intriguing, much like the rest of Destiny’s narratives, you’ll need to troll the Bungie codex to get any real sense of context. More or less Eris’ will still only function like a quest-peddling vending machine, handing you missions that are important only because she says they are. Personally I was hoping for another NPC who at least radiated the presence of the Speaker or the Queen of the Reef, not just another quartermaster, albeit a spookier one. Even your Ghost spends the entire story arc completely and inexplicably mute, which while some players might celebrate this aspect, it doesn’t change the fact the little light is a keystone of the story. Little as it may be, it should have something to say, and its absence of opinion as you take on one of your enemy’s demigods is problematic.

So abandoning the notion this expansion would make me care more for the events in Destiny than I currently do, I decided to focus my attention on the gameplay and new missions. We’re going to focus on the new missions part of that last sentence, because new missions doesn’t mean new maps. You will explore new rooms, and in these unique and darkened corridors you will find some new enemy variants; But you will not be journeying into bigger wider expanses. Some of these new rooms will be repurposed versions of the old, and some of them will be more elaborate additions.

Considering how this title plays, this developmental shortcut is isn’t exactly a bad thing. Destiny has proven it can do a surprising amount with what it already has. But these new sections don’t feel quite like they’re worth a third the price of the entire game. They do come with new soundtracks which are pretty sweet, but The Dark Below can only get so much mileage out of that.

On the expected bright side, The Dark Below does bring plenty of challenge with it and Eris’ quests are a ton of fun to empty clips through. Either as a solo operator or as a fireteam, the game expects you to make the most of the experience you’ve earned up until this point. You will face excruciating waves of enemies deadly to all but the most seasoned and well equipped Destiny veterans. The challenge is well managed and tough without slipping into the masochistic doomscape that are the nightfall strikes. Unlocking the various challenges is only slightly tedious, and a skilled player can blow through the majority of them in around 4 hours. The strike mission that currently concludes The Dark Below’s story arc is much less forgiving, potentially doubling the effort of all the missions that lay before it. But as long as you came well prepared it shouldn’t add the price of a snapped-in-half controller to the cost of the expansion.

However, it’s important to note that The Dark Below doesn’t only add things to your Destiny experience. For current players it also changes then them. The Vanguard armories have all received a dramatic overhaul, with many high-end standby’s getting replaced or removed altogether. Also, for those of you like myself who are sporting more than one character, you won’t be able to peek at the gear of a class you aren’t currently playing. Requirements to raise the level of and purchase these items has also been altered, and in true Destiny fashion, the only explanations for this are going to be found on the web. Bryan and I found ourselves more than a little put-off by this particular change, since it meant that several weapons we’d been saving for could potentially be a thing of the past. For a game that, at its heart, is a grind-fest for better gear, (gear that eventually determines your character’s level and access to maps such as the The Dark Below’s) unexpectedly removing that said gear certainly wasn’t a popular choice for me.

Bungie also seems to be slightly confused to who this expansion is actually made for, somehow they have seemed to let down the hardcore and casual players in different ways. The guardians who have been diligently protecting galaxy from day one will suddenly notice all their hard work will almost not matter. The old raid gear and weapons that used to be the best of the best, and the only way to hit the old level cap of 30, are not only obsolete but better equipment can simply be bought from vendors. As with any game that increases the level cap, old gear will become useless, however it is insane that you can simply buy better gear very quickly. This is a slap in the face to the people relentlessly playing and running through the end-game of Destiny just to have all that work become meaningless the second The Dark Below went live. On the other hand casual players who are not at or near the old level 30 cap will not find much new to do at lower light levels, meaning they will likely be grinding through everything they already have been just to try and see anything new.

Out of all the new content the newly added raid, Crotas End, is the biggest piece and probably one of the main reasons to get The Dark Below. It is brutal, fast, and if you are starting fresh with no prior knowledge, completely infuriating in a sweet way. It has unique set pieces compared to the vanilla game, and some truly fun elements. The first run I did took over 7 hours and numerous people popping in and out before we called it a night. The weird thing was during our 100+ wipes I never stopped having fun. I enjoyed dying in that raid repeatedly and never quite finishing, over any of the other new content. The raid is possibly the only main reason for buying The Dark Below. Just as with the Vault of Glass raid Destiny truly shines when you are running through a hard raid with friends. It is not as efficient as “cheesing” the raids, but the social aspect of Destiny is perfect in the right settings. If you have a relaxed group, with like minded players, and a five hour raid is much more enjoyable than a one hour raid with people yelling. Crotas End, for me, is also more enjoyable than its predecessor and has some truly fun and unique mechanics. It is also dark and very moody, at times making it nerve-racking to run into the darkness, and it nails a horrified atmosphere. I am a big fan of the new raid in all honesty, just not sure if that alone is worth the admission.

At the same moment you can say goodbye to the Vault of Glass because it is almost obsolete. While every other way of dropping loot has updated loot-tables, VoG is completely unchanged. Unless you need ascended shards or energy to get to level 31, there is no reason to run it unless you are looking for a walk down memory lane. Maxed out gear and weapons from the Vault of Glass is equivalent of running the new raid with blue items which is extremely disappointing. The raids are the end-game for Destiny and even with a new expansion we are only left with one viable raid again. And with new upgrading materials, once you have the raid gear you will no longer need to ascended shards or energy. I really wish they had changed its loot-table to at least give a choice on raids, versus only leaving us one real choice.

My personal biggest problem with The Dark Below is if you love and are currently playing Destiny without it, you will miss out on many things you had before. The new strikes and story missions have been added to the rotation in the nightfall and weekly strike events. People who play those missions for the good rewards attached to them, will simply not be able to play those at all when any of the new content is in play. Much like the first week it has been out, if you do not own the new content, you cannot play the old weekly’s you have been. This is disheartening because it is almost as if you have to buy the expansion to continue playing events that you were able to. In a way from week to week they are actually taking away content from vanilla players. I find it almost unforgivable that there is not playlists for the weekly content for both DLC and vanilla players.

Destiny: The Dark Below

In the end The Dark Below has some great ideas and adds to an already solid game, but what it adds does not seem to be worth 20 dollars. It is unfortunate that a game with such great gameplay is hindered by its own weight and becomes diluted by its own ambitions. The lack of new content is inexcusable and it will be interesting to see how well it holds up until the next expansion, House of Wolves.

I've been a huge fan and critic of games and movies ever since I had a voice to speak about them. I love power and influence of great storytelling, interactive and otherwise, and now want to be more than just a consumer. My biggest strength in this regard? Almost every time, I'm fair all the time.
Related Articles: Destiny: The Dark Below
Share
Tweet
Share
Submit