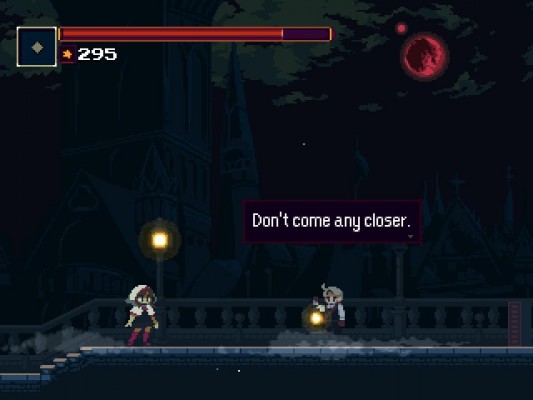 Once upon a time, I met one of my heroes of the gaming journalism world at a media event. After spending the first few minutes of our encounter with me being utterly starstuck, we eventually got on with the business of talking about the job. I asked him what advice he had about reviewing games. How you know what’s good and bad, recognize the difference between substance and spectacle, and generally how a person should keep the compass of their critical opinion pointing true north.

What he told me was; “Whenever you play game, try to remember whatever it was – way back in the day- that made you realize you loved them. And then when you play a new one measure whatever feeling it gives you against that moment.”

I’ve kept that sage advice in mind ever since that moment, and it’s been invaluable. But rarely has that feeling my peer told me to keep in mind been as vividly rekindled as when I played Momodora: Reverie Under the Moonlight.

Momodora: Reverie Under the Moonlight, also known as Momodora 4 by long standing fans of the series, follows the adventure of Kaho, a warrior priestess from the village of Lun. As a mysterious curse spreads across the land, plaguing it violent with monsters and spirits, Kaho takes it upon herself to bring an end to the danger before it overcomes the entire land.

Armed with her trusty bow and a sacred leaf from her temple, Kaho moves to strike deep into the heart of the villainous forces sweeping the world of light and return hope to the people.

Although Momodora’s story is present, it exists more as part of the atmosphere rather than as a traditional narrative. You will meet new characters over the course of the adventure, discover some of their motivations and plights, but true to the nature of the classic 8 and 16-bit platformers this game emulates, your heroine’s quest is a linear one. Although the story explains what’s happening overall and gives a deeper value to your role within those events, there isn’t a lot of intrigue. Each moment of exposition exists as a checkpoint for your progress more so than a turn of the page for some sweeping narrative.

If you immediately start to get a Castlevania sense about Momodora: Reverie Under the Moonlight, that is clearly intentional. The sense of Lun being one of the only points of light in a city fraught with darkness is ever-present and classically themed.

For some games this might be considered a missed opportunity, but in the case of Momodora it’s exactly right. This is because the deeper existence of the story and your interaction with it is almost entirely optional. Interacting with curious objects or talking with the besieged citizens cowering about the labyrinthine maps can be entirely bypassed in the interest of focusing on the action- which is pretty non-stop. The importance of the story isn’t as much of a predetermined factor as it is an optional component to enhance your fun, just like back in the old days when all you’d get was whatever was printed in the manual or slapped across the back of the box.

The aforementioned action that this game presents is a rare treat of masterful design.

Enemies, traps, and other obstacles reset with each pass through an area. This makes grinding for currency and developing your speed-run skills a natural part of playing the game, but can prove tedious if you get lost easily or don’t make the best of each pass.

Kaho’s melee weapon, the sacred leaf, behaves like a sword or dagger, effortlessly flowing into combinations that ravage your opponents. Whenever you find or force an opening in your opposition’s defenses the sacred leaf rewards you with a satisfying series of attacks that deal consistent damage.

The bow on the other hand, besides obviously being a ranged weapon, deals a fraction of the sacred leaf’s damage in exchange for a much faster rate of attack and an inexhaustible quiver. While extremely useful in a number of situations, its lack of impact makes it dangerous to rely on if enemies charge you or if their own long distance attacks compromise your shooting position.

This paints the very clear picture for the action, which is that while it’s possible to play the game either way if you insist on being committed to a single method of attack, the best results come from how well you can use these two weapons in combination- which is fun as hell.

Beyond her methods of attacking, Kaho can leap, double-jump, and evasively roll out of danger quickly in order to keep her health where you want to be between checkpoints. All of this is before you begin to discover other additional abilities that lay hidden throughout Momodora’s several maps or in the inventory of its several strange vendors. These special abilities or equipment can have small or drastic effects on how Kaho behaves in combat both passively and directly, and as you begin to discover your preferred method of facing the games bevy of monsters and traps the difference will be surprising.

Boss battles, like your first encounter with Lubella, test the development of your skills viciously as the entire screen comes alive to defeat you.

This brings us to the looks and feel of the game, which is kind of mesmerizing.

The level of quality presented in the animation is jaw dropping, and while some might find that hard to believe, I would make it a point to remind them of the retro-esc style this game is going for. Momodora’s conservative number of color palettes and pixelated frames, when considered against its immense number of animations and fluidity of on-screen moment, is a true accomplishment, and all work to showcase Kaho as the hero of the hour.

Kaho is in constant motion; from her idle poses, to the scatter of leaves she emits during double jumps, and even the crouch she momentarily enters when landing from a taller than average height. All of these elaborated pieces add to her breath of life. They take a character who spends the entire game in silence, yet who is heard by everyone she interacts with, and lets her draw out the imagination we as players all used to add to these experiences. Playing a modern game which so skillfully uses such a nostalgic technique is an utter delight on countless levels.

The soundtrack of Momodora: Reverie Under Moonlight, which is what first caught my attention when researching the game, is an instant classic immortalizing the entire experience. It makes the game feel like a story you’re being read just as much as it’s a game you’re interacting with, and it’s been a long time since I’ve experienced anything of its kind. In an age when we have entire orchestras composing the musical memories of our games, it’s easy to forget how much simpler efforts, when placed in the right hands, can grant similar results.

In all my time with this game, although I found nothing I would consider broken, I did spot a couple things that players may not like.

Like any of the platformers from the era Momodora seeks to emulate, the humble number of color palettes can work against you in unexpected ways. Some enemies and dangerous objects can blur in amongst their surroundings, becoming completely invisible until they deal you damage or kill Kaho outright. This is especially true in the difference between bottomless pits and downward leading paths, which upon your first encounter with them will often look exactly alike.

In addition to earmarking your progress, save points restore your health and remove negative status effects. Although they are not overly frequent, you will encounter them often enough to feel confident making more and more daring charges into the map.

Although these elements add to the aesthetic of the game, and likely are intentional, it doesn’t change the frustration a player can feel if they’re unexpectedly murdered a long ways after their most recent save. Gamers collectively shared a sigh of relief when save points were nearly eliminated out of our daily vernacular, and that was for a reason.

One other thing that got under my skin a little bit was the opposite side of how much I enjoyed the music, which was that when it was absent what it was replaced by felt painful and grating.

There were a few sections of the map that, instead of having the scores I’d come to love, only had a single looped series of sound effects or an extremely short and moody track. Although it was still produced with quality, the length of time it persisted as I explored was longer than its welcome.

But these are nitpicks, like the occasional grammatical hiccups the speaking characters were occasionally guilty of. They didn’t make me enjoy the game any less or truly distract me from how great a time I was currently having. This game is plainly fantastic and enough to make me blind-buy the entire series even though this is the first entry I’ve ever played. Hopefully a console port is somewhere on the horizon, because this is the kind of game that really needs to reach as many players as possible.

Momodora: Reverie Under the Moonlight

Momodora: Revere Under Moonlight is a fantastic game, wonderfully animated, rich with accurate and sharp controls, and a worthy successor to the heyday of platformer gaming. Games like this are what made console gaming great and keep PC gaming honest, and the fact titles like these are still being made is why the industry has long-standing hope. If this game interests you enough to look at it twice, save yourself the regret and pick it up- you’ll be happier for it.

I've been a huge fan and critic of games and movies ever since I had a voice to speak about them. I love power and influence of great storytelling, interactive and otherwise, and now want to be more than just a consumer. My biggest strength in this regard? Almost every time, I'm fair all the time.
Related Articles: Momodora: Reverie Under the Moonlight
Share
Tweet
Share
Submit