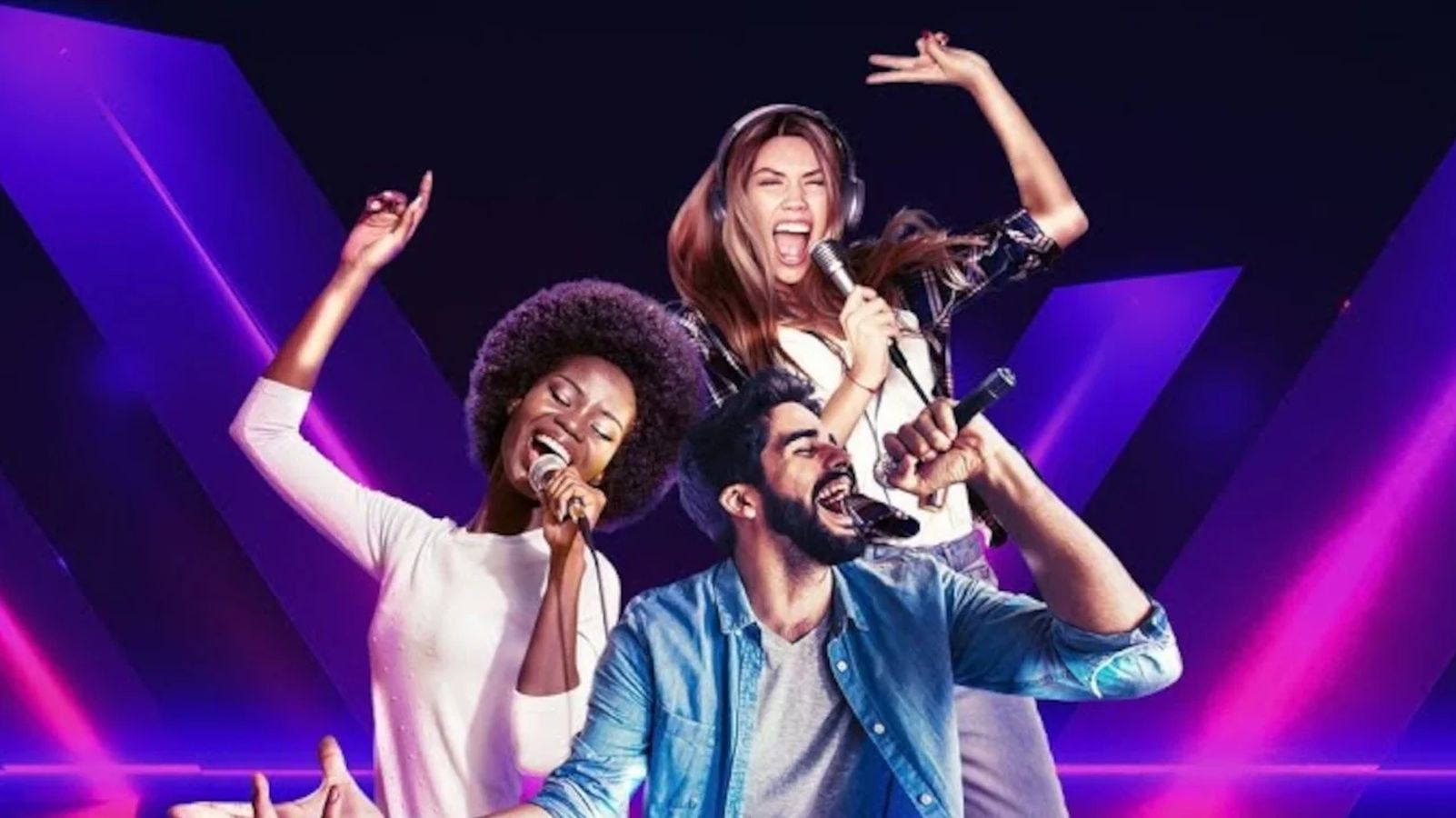 It’s time to step up to the microphone and belt it out, and just in time for the holidays. I checked out Let’s Sing 2022 last year (our review), so I was eager to see what this year’s entry would do differently. Put frankly, I wasn’t impressed with this game’s predecessor, citing a messy soundtrack, paywalled popular tracks, and some inconsistencies in both UI and the experience as a whole. That said, I did enjoy the cool music videos, eight player gameplay, the bright and colorful presentation, and the super fun 8-player party mode. It was the very definition of mixed. Switching from the Xbox over to the PlayStation for a little variety, it’s time to get back behind the microphone with Let’s Sing 2023.

Like its predecessor, Let’s Sing 2023 is a karaoke sing-along game focused on, as you might expect, singing. You’ll belt out your favorite tracks, trying to match pitch to net points. Sticking with the note chart and line, you’ll earn streaks to maximize your score. If you played last year’s game, or any game that has voice tracks, you’ll know precisely what to expect here. Also like its predecessor, you’ll get a music video accompaniment to keep anyone watching enjoying themselves, even if they aren’t behind the microphone.

Unsurprisingly, Let’s Sing’s candy-colored explosion continues into this year’s iteration. Once again we have excellent and vibrant colors at every turn, with fun and engaging caricatures adorned with a whole bag of Skittles worth of color varieties. The game once again fills out its 30 included tracks with a mix of pop, 80s and 90s classics, only this time we’ve also got a dash of fun, feel-good, much-requested Karaoke tracks like Stand By Me and Kung Fu Fighting*. This time around the track list feels more balanced and likely to appeal to a wider audience than its predecessor, at least on paper. 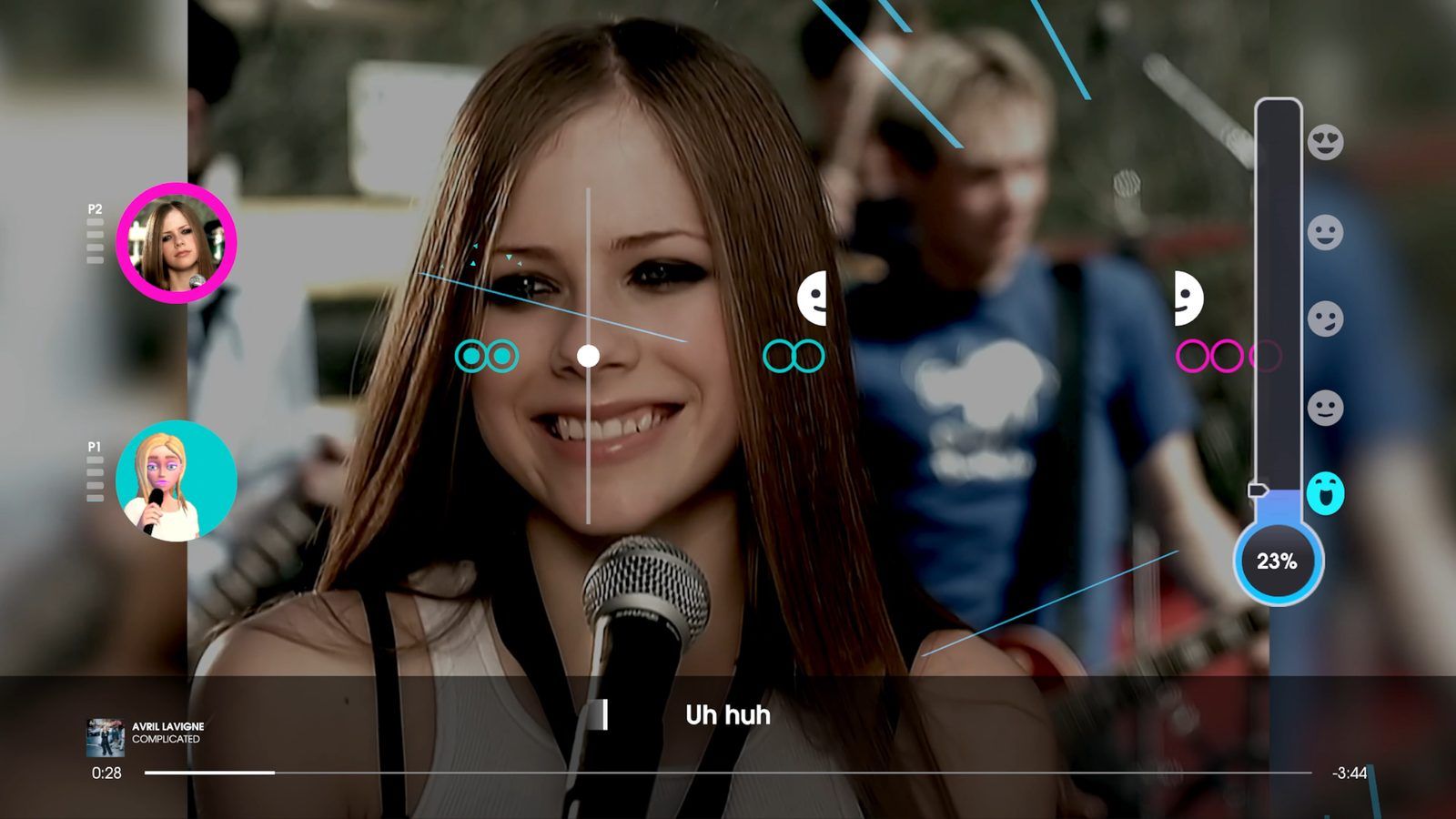 Given that I did review the previous year’s installment, I have no choice but to take a closer look at the things we didn’t like and see if they’ve improved. Namely, the monetization and UX for the game.

Developer Voxler didn’t spend a moment on updating the UX or UI in Let’s Sing 2023. The same characters, the same layouts, the same…well, everything. Since there’s nothing new under the sun there, let’s look at the songs:

You may have noticed an asterisk next to some tracks in the list. On the main screen is a grayed out box entitled Legend, noting that “Legend and Mixtape modes” are tucked behind this locked content. It also says “To enjoy the full experience, you must get the free downloadable content pack”. Unfortunately, no amount of searching in the main store on the PS5, via a browser on the PC, or in-game in Let’s Sing would uncover where or how to unlock this pack. That puts 10 tracks in the missing category, slimming the list down from 30 to 20. When the track pack is super eclectic (read: like last year, you’ll struggle to find more than 5 songs you like) already, having some missing is just a “black fly in your Chardonnay”. 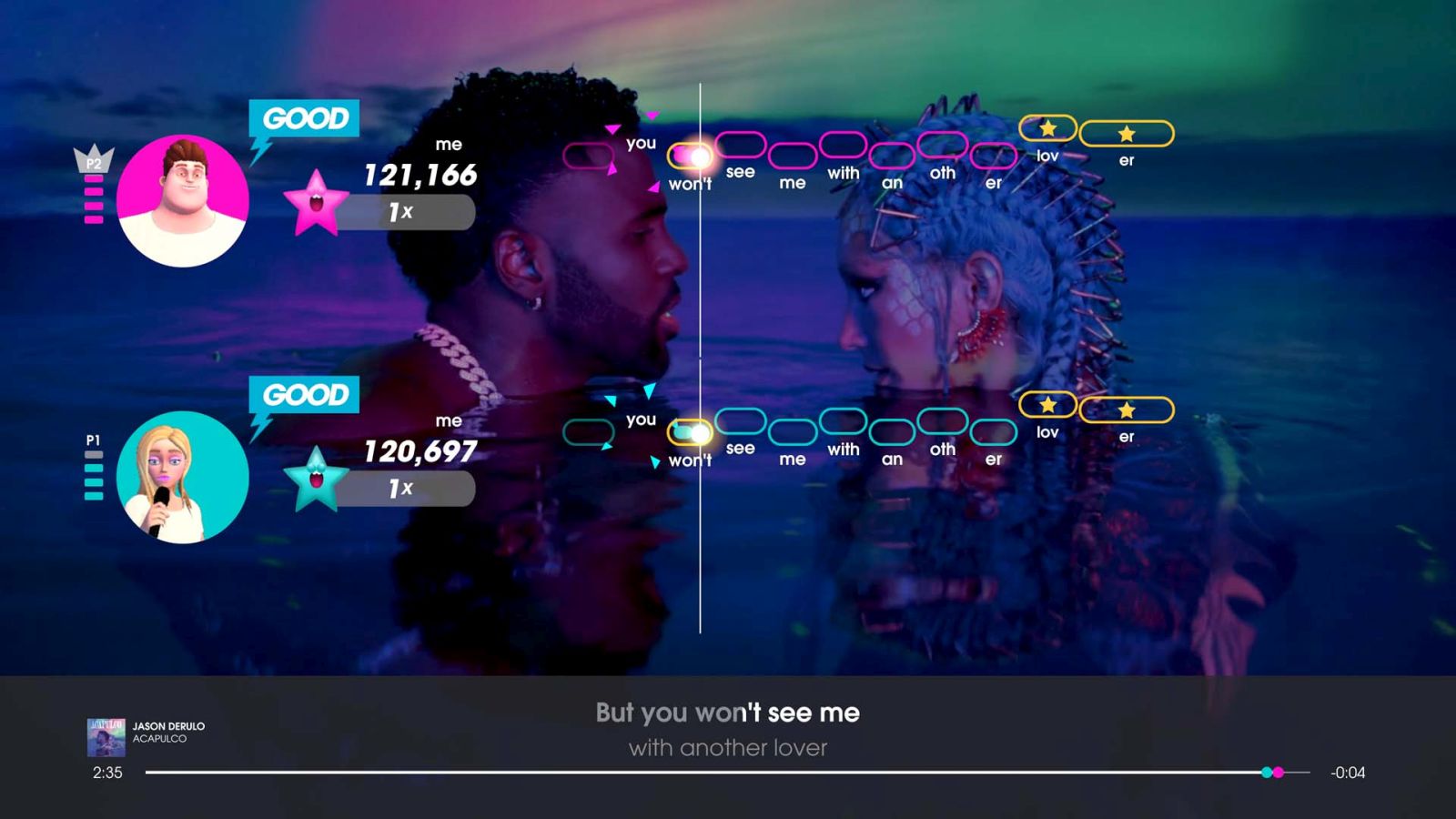 There’s a way you can enjoy many more songs, of course – paying for them. Individual song packs are available (5 songs at $5 each) to maximize the enjoyment out of the experience. Alternatively, you can pay $90 for a “Platinum” edition of the game, which includes all the song packs and brings the total number of songs to around 90 instead of the initial 30 (or 20, depending on if they fix the Legend download problem). This means you aren’t getting a price break at all by buying everything all at once – you’d be better off picking the tracks you want.

As in the previous version, when you sing a song you’ll be treated to the music video for the track. That means watching P!nk hop around committing breaking and entering, Freddy Mercury crawling around like some sort of grape-eating elf-cow, Eiffel 65’s very blue fever dream, or getting entirely too close to Gotye while they doodle on him in his video. In the song Stand by Me by Ben E. King we see some familiar faces – Wil Wheaton and River Phoenix make an appearance, as well as a few clips from the film by the same name. 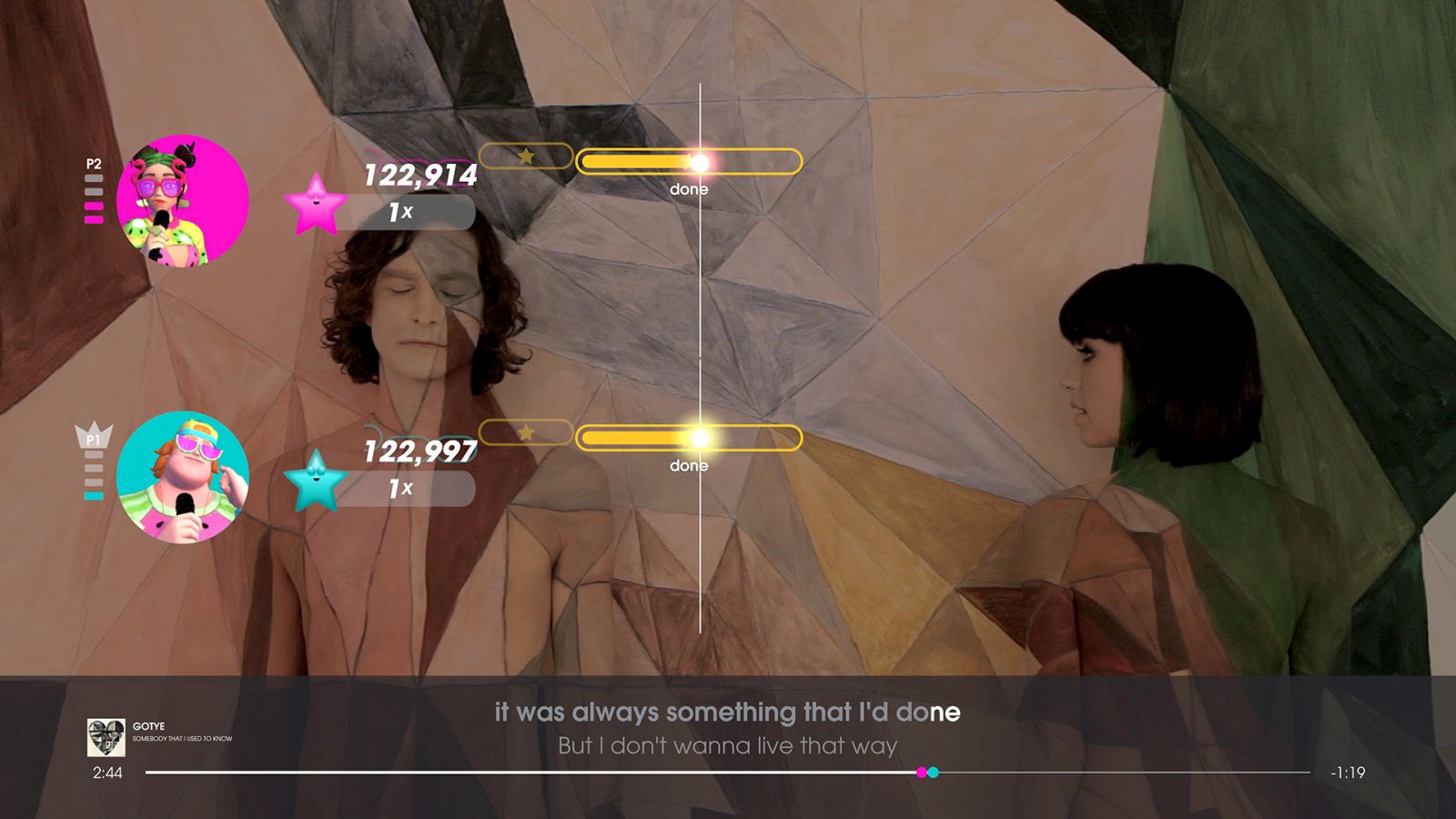 When it comes to modes there’s again nothing new under the sun. The “feat.” mode is 1v1, though you can play with an AI. Truth be told, it’s hard to tell as it just feels like you are singing solo – you’ll want to actually bring a friend to the party. Jukebox is just a listening mode for songs you’ve unlocked by playing them once. Mixtape is…well, I don’t know, as it’s locked behind the Legend song pack download that doesn’t work. World Contest is your online mode to play with your friends. Let’s Party brings the count up to 8 as you can sing in two teams (filling in some of them with AI if needed). Finally, you have Classic which is the standard 1-4 player sing-along. Honestly, most of these modes could easily be combined and you wouldn’t notice a difference.

It’s another tough year for Let’s Sing. On paper the track list sounded like it could be at least a little better, but with a shoddy execution a third of them are missing. You never really feel like you are accomplishing anything as you unlock a bunch of cosmetics you rarely see. The modes don’t feel distinct, and the confusing UI doesn’t help, now two years in a row. It makes Let’s Sing 2023 feel like a vehicle to sell me track packs and not a complete game experience. While that’s true on some level, the base game simply does not have enough content to justify the price. Buying the Platinum version only adds more songs, but without any sort of price break. The unfortunate reality is that there is no alternative. If you want to sing, this is the only game in town. Let’s just hope that Voxler can do better for Let’s Sing 2024. 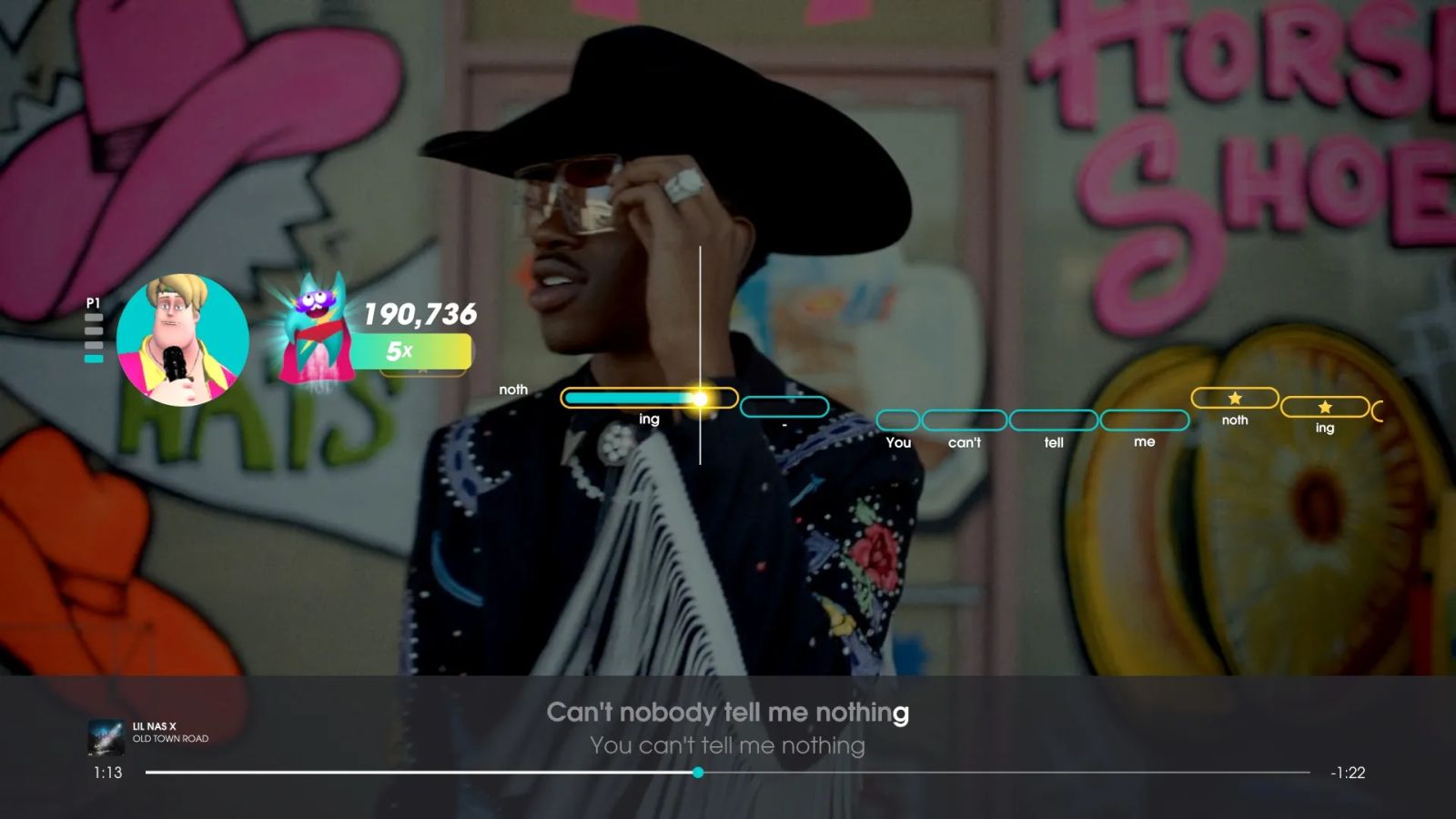 It’d be easy to confuse Let’s Sing 2023 for Let’s Sing 2022. The same bugs, the same thin soundtrack, and the same monetization. As such, it earns the same score as it’s the SAME GAME.

Ron Burke is the Editor in Chief for Gaming Trend. Currently living in Fort Worth, Texas, Ron is an old-school gamer who enjoys CRPGs, action/adventure, platformers, music games, and has recently gotten into tabletop gaming. Ron is also a fourth degree black belt, with a Master's rank in Matsumura Seito Shōrin-ryū, Moo Duk Kwan Tang Soo Do, Universal Tang Soo Do Alliance, and International Tang Soo Do Federation. He also holds ranks in several other styles in his search to be a well-rounded fighter. Ron has been married to Gaming Trend Editor, Laura Burke, for 21 years. They have three dogs - Pazuzu (Irish Terrier), Atë, and Calliope (both Australian Kelpie/Pit Bull mixes).
Related Articles: Let's Sing 2023
Share
Tweet
Share
Submit