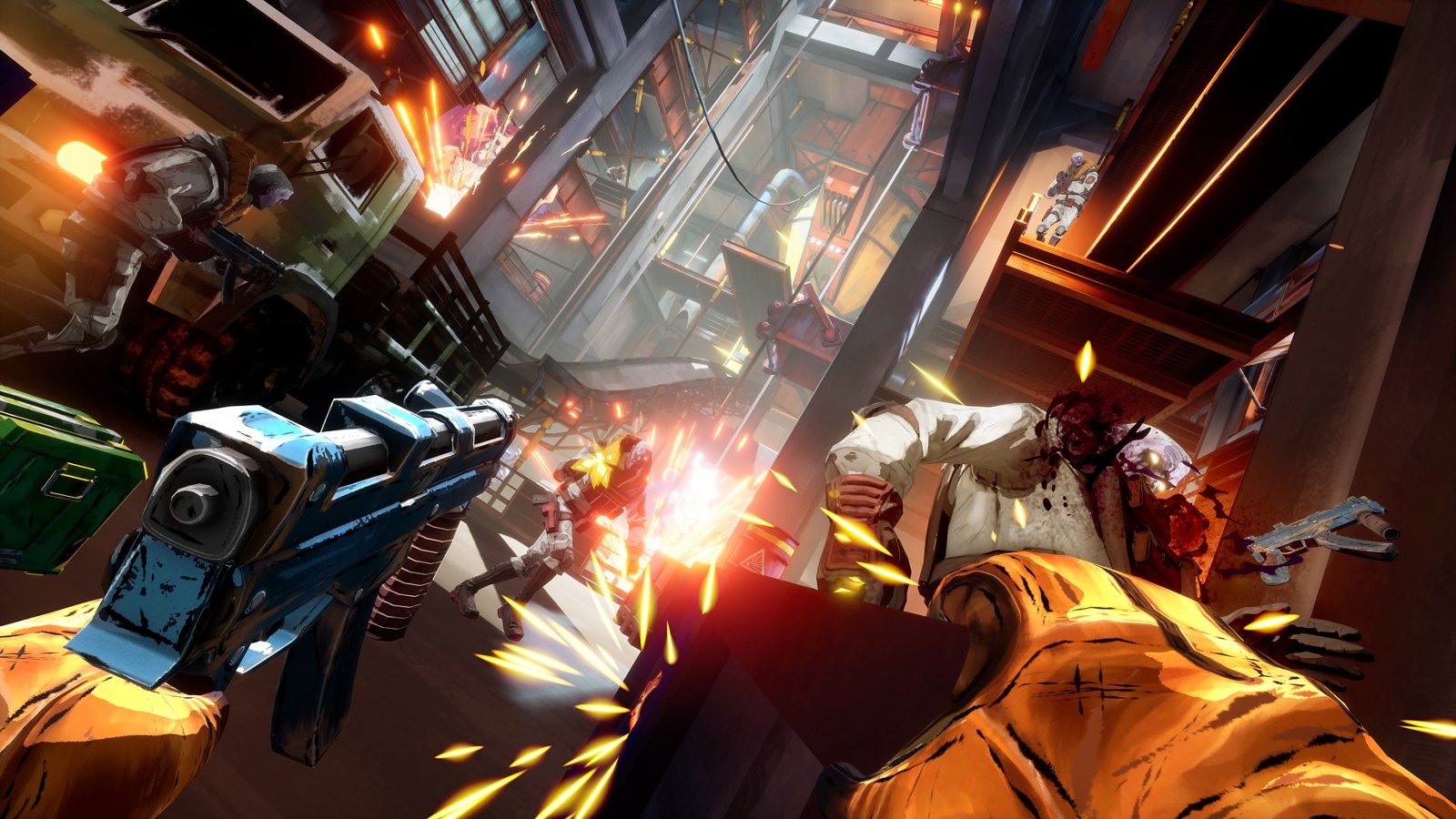 I guess the first thing I need to do is apologize for that horrible pun, but in all fairness it does mesh with the over the top nature of the game. I feel like I’ve been under the headset quite a bit recently, with this one being my third review of a VR game, and while I’ve enjoyed everything I’ve experienced in these virtual worlds, this one might take the cake for being the deepest. Fracked by NDREAMS is quite the spectacle to behold, and while I’m going to do my darndest to put you in my shoes with this review, you may just have to pick it up to understand exactly how extreme this one is.

So, Fracked immediately throws you into the deep end. There’s a quick tutorial of how to use the motion controllers, getting the calibrations set for looking around and said controllers, and then you’re flying down the snow covered mountain on a pair of skis. You don’t use ski poles or anything to go downhill though, rather move your head left and right to control your maneuvers. Eventually it’s pretty simple to get down, but I can say if you panic thinking you’re going to crash, it’s too easy to dramatically change your course and screech to the left or right too hard and mess up the rest of the run.

A sports game this is not however, as once you make it through the ridiculous first level (it took me forever to take the final turn) you have to grab a gun that’s been shoved into a dead bad guy’s mouth and start shooting back at the live ones. Now, I’m sure there’s an explanation for a lot of this, what the story is, why I’m here, etc… but it doesn’t feel like that’s the focus of Fracked. Either that, or I just missed plenty of dialogue during the extravagant action sequences. I know something bad is happening to miners because of an evil corporation, and I know for some reason a lady in a helicopter is helping me deal with it, but I’m not sure why I’m dealing with it. I don’t think this hurts Fracked, especially with a great VR gameplay loop (we’ll talk about that more), but often I wasn’t sure why I was doing what I was doing.

The thing that really adds to the experience is the vibrant setting. Fracked chose to go the Borderlands cell-shaded route with it’s art style, and it works extremely well for a VR game. So many games aim for a more realistic look and don’t manage it as well given the resources required for VR, and this artistic decision feels like it benefits Fracked wonderfully. Everything looks great and there won’t be any complaints about sub-par graphics from me. The other thing that follows the Borderlandsy feel is the dialogue, which definitely had that irreverent charm to it. 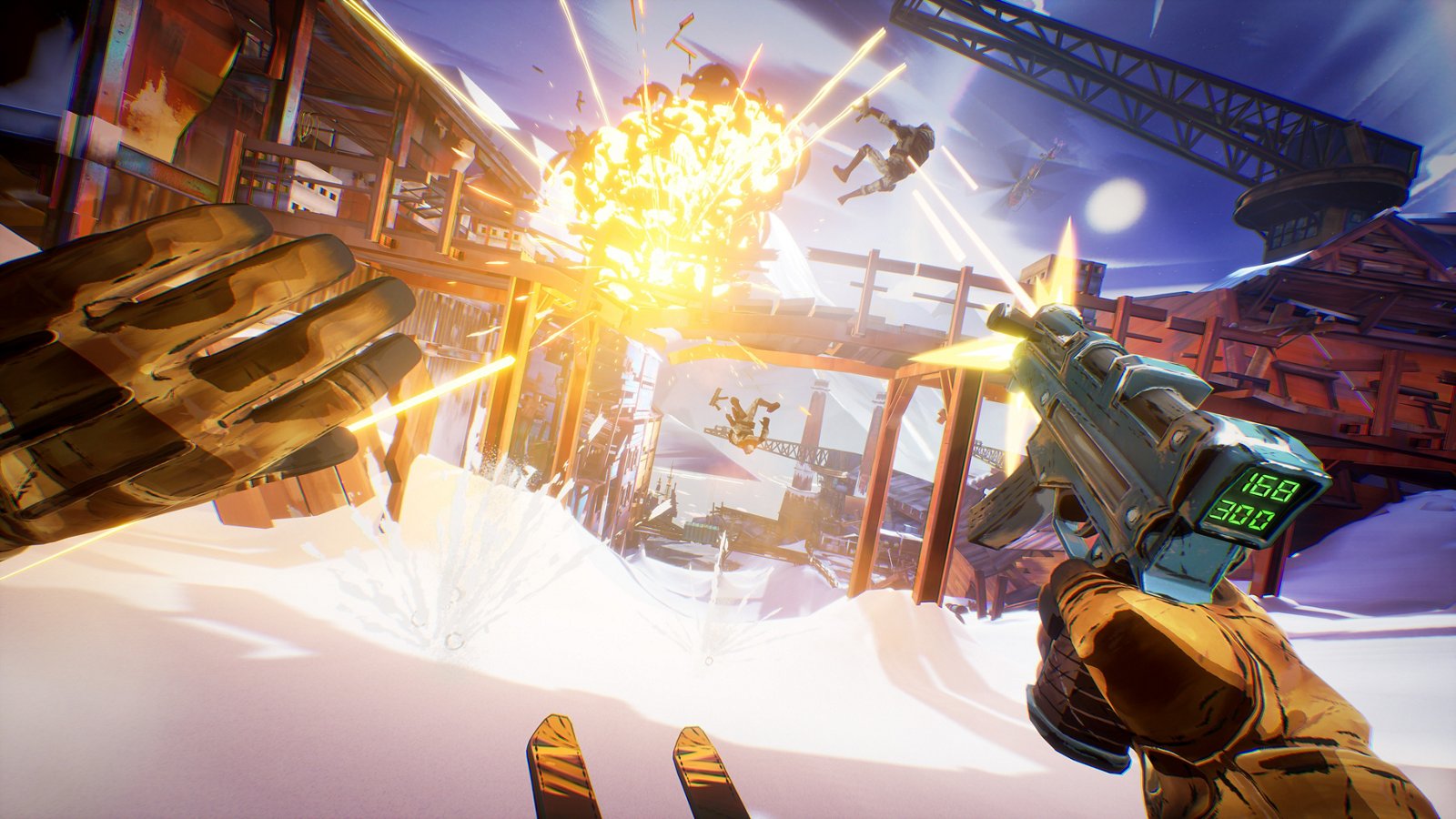 Of course, we all know looking good only gets a game so far, it has to play good in order to keep you invested. Fracked does look good, but where it’s at its best is with the gameplay. It’s tough in the infant stage of VR to make a game that allows a lot of movement but still is comfortable, and it’s so easy to cause motion sickness if something moves a tad too much. In my time playing the game I haven’t experienced any discomfort, and it runs very fluidly as you look around the levels.

What’s most impressive is that moving around doesn’t involve teleporting. Most VR games tend to utilize a “teleport” movement system in order to keep you from getting nauseated, but Fracked throws you right into running around, holding a button to walk or double tapping it to sprint, along with strafing depending on where you’re pointing your empty hand. You can change your point of view from left to right by pressing specific buttons as well, but largely the movement is just like hitting an analog stick, and it works like a charm.

This bleeds into the gunplay as well, feeling very clean in using your weaponry. Given Fracked is a PSVR exclusive, you are stuck using the ancient technology of Move controllers, but NDREAMS has done a phenomenal job at making them work for the game. The tracking is pretty on point, and it didn’t take long for me to be doinking bad guys on their domes. It’s not always the best, as the hitboxes on the bad guys don’t always seem to register, but that could be my feeling like the sharpest gun in the west rather than a glitch. The climbing mechanics that are used also are surprisingly good, and shimmying across ledges is way more fun than it should be. It has the same issues some VR games have, requiring a bit too much effort to make a long reach to another ledge at times because the tracking is a little off, but I never fell because of it and simply readjusted on the ledge. 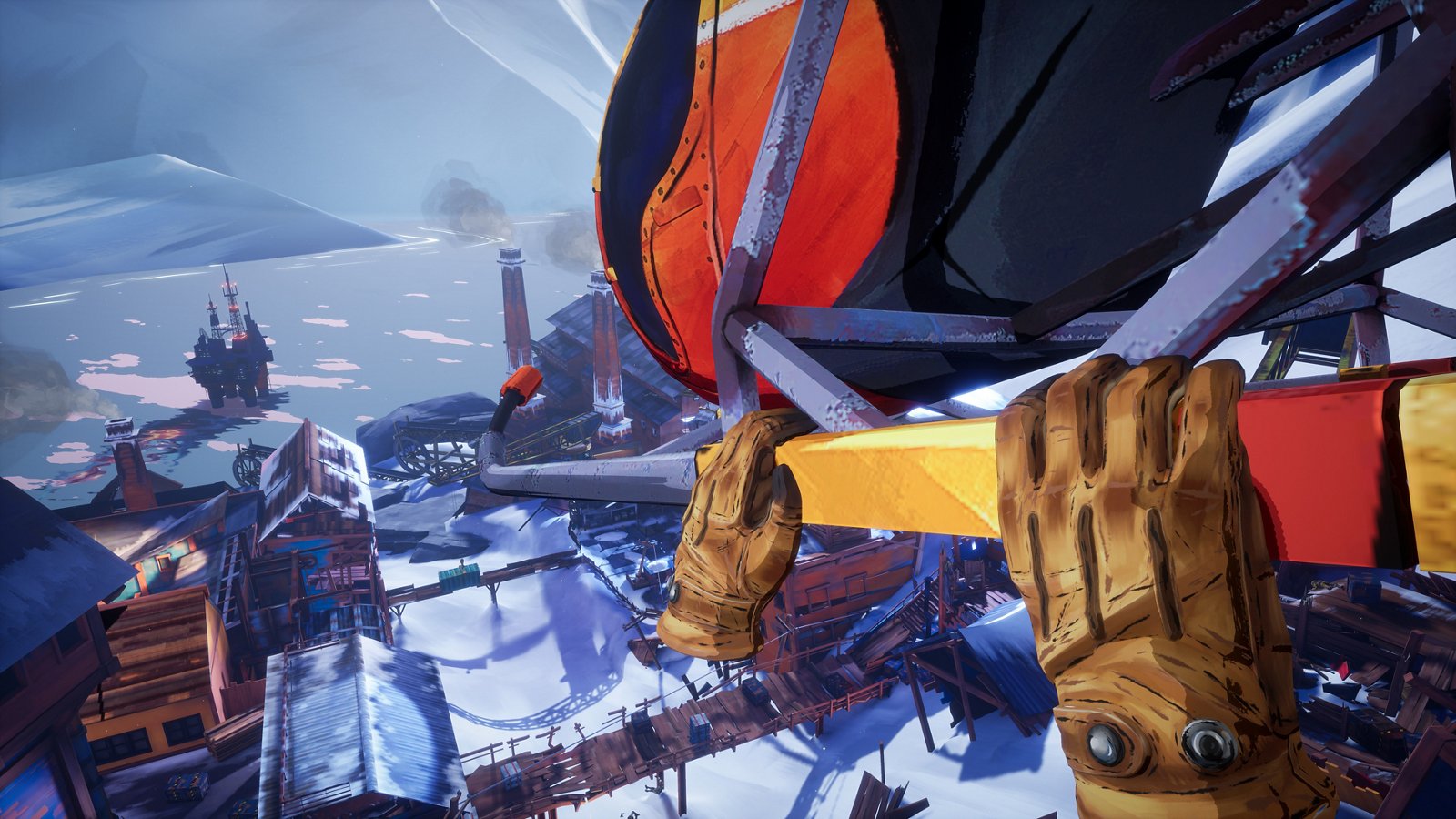 While there is a lot to like about the game, I have to say what you’re supposed to be doing isn’t always very clear. As mentioned before you have someone chatting with you giving you some instruction as to what to do, but often I end up in firefights and can’t recall where to go next. There is a pin that appears on screen to lead you, but it isn’t always visible and I remember spending way too much time trying to figure out what to do after shutting down the drill in a level. Even moreso, once I made the right guess it took forever to realize I needed to hang onto the drill I’d just climbed to be knocked into the depths of the cavern. It would be nice to have a bit better navigation tools available to move forward when I’m lost.

Besides this, the enemies can be a bit overwhelming, even on easy difficulty. Sometimes you can clear a sector, but often they just continue to respawn, which is really annoying. Since I’m at the mercy of the Move controllers for all of my movement, even at my best a baddie can quite easily flank me and take me out (which doesn’t take long). The cover system is awesome, grabbing the edges of said cover and dipping behind them while firing back, but if an enemy is constantly back in the fight before I can take the space I’ve made it really doesn’t help. This hurt with the point mentioned above about getting stuck around the drill level, and with another bad guy showing up whenever I killed his buddy it took longer to solve than it should have.

Fracked hits the slopes hard, slowing down at times to a frustrating degree, but doing so much right you keep on going. The gunplay is a lot of fun, the immersion is enjoyable, and the freedom of movement is surprisingly good, but I do wish the enemies spawned a bit slower and there was a bit more in terms of guidance. If you're looking to shoot up some grunts in a Borderlandsy setting while skiing, I can't recommend this one more.

David Burdette is a gamer/writer/content creator from TN and Lead Editor for Gaming Trend. He loves Playstation, Star Wars, Marvel, and many other fandoms. He also plays way too much Call Of Duty. You can chat with him on Twitter @SplitEnd89.
Related Articles: Fracked, VR
Share
Tweet
Share
Submit