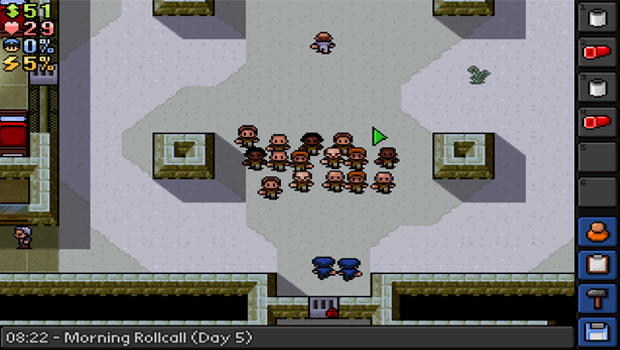 The idea of a prison break does nothing but excite me. There aren’t many prospects more thrilling than sticking it to the man using only your wits and the limited tools offered up by your oppressors, so naturally I quickly snatched up the chance to play The Escapists. Sadly though, “prison” is perhaps the best word to describe my time with Mouldy Toof Studios’ sophomore release. The more I played, the more I felt trapped within the confines of its limiting mechanics.

The Escapists allows you to play the role of a prisoner, incarcerated for crimes unknown, attempting to escape from jails of varying security levels. Escaping through one of the many correctional facilities takes a great deal of planning and, to the game’s detriment, an immense amount of repetition.

The drudgery of prison life is represented thoroughly by The Escapists — often to a fault. I fell into a routine of doing dull minigames to boost my stats before breakfast, doing tasks for my fellow prisoners, working at my assigned job, working out, eating dinner, reading up to increase my intelligence stat, and going to sleep. Working on my escape route while also adhering to a strict schedule was intriguing and created pressure, but so much of the daily routine does nothing to add to my enjoyment of The Escapists. Morning roll calls are unnecessarily long, forcing players to basically stand around waiting for the guards to finish blabbering, and immediately afterwards prisoners are shuffled off to breakfast. Breakfast is a useless period as well, though. The purpose of eating is to restore energy, but you’ve expended zero effort in listening to roll call, so a trip to the dining hall is pointless, rendering the first couple of hours of each in-game day as dead air.

Players can legally earn money through daily jobs, but the best way to make fast cash is by doing favors for other inmates. Oftentimes your boys on the block will task you with beating up a rival of theirs, which will net you some cash, but lower the inmate on the receiving end of your beating’s respect for you. Perhaps if forging relationships with fellow prisoners were more important, then I would have been reluctant to pound literally anyone who I was asked.

Forming allegiances with certain characters doesn’t feel meaningful because all it seems to do is lower the cost of items you can buy from that person and decrease the chance of them fighting you. Players can have other inmates join them as “buddies,” but the process is arduous, often boiling down to stealing from others and gifting your ill-gotten gains to whoever you’re trying to woo. While the prospect of having a team to bust out all at once in a rage-filled prison break is exciting, the relationships you build are shallow and forging them is time consuming and tedious.

The Escapists boasts a huge library of items, all falling into two categories, permitted and contraband. Contraband, like weapons or anything that might aid in your quest for freedom, is disallowed, and if your room is searched or you fall unconscious, then any illegal items are confiscated. The volume of items put before the player is extremely daunting, and the process of crafting is simple, but figuring out which combinations work and which don’t is a hassle.

Players can sometimes buy or find crafting recipes that detail exactly what items and how much intellect is required to make a new creation, but those are so few and far between that I found myself often combining items at random, hoping to find a combination that worked. It’s a process that, without luck in finding crafting recipes or a guide, requires a lot trial and error.

If you’re growing tired of me talking about the monotony of The Escapists and want me to get to the actual escaping, then you’re starting to understand the game’s fundamental problems. Getting out is a slow-going task. You’ll have to dig your tunnels just a little bit at a time, so as not to get caught, so unless you’re extremely efficient and lucky, you won’t be able to tunnel out in just a day. Careful planning has to be taken to escape.

Every time you make progress it feels like it can be undone at any moment. The risk of a setback doesn’t do anything to create dramatic tension though, as it just adds to the tedium of the gameplay. I would slowly make progress on my tunnel to freedom, only to get caught by a guard, filling in my hole and taking away my shovel that I spent perhaps an hour or so procuring. That’s frustrating, not thrilling.

Prison break movies capture against-all-odds, brain-over-brawn escape stories that enrapture and enthrall me, but The Escapists consistently fails to do both. Getting out of jail doesn’t feel like an impossible task which players have to surmount, but instead it feels like an inevitability that, with an immense amount of patience and time, will be achievable. It’s made even worse that the easiest way to work towards your goal is by simply stealing from and beating up prisoners, bending to every task they assign to you. You never feel like you’re in control of your own fate in The Escapists, as you’re constantly following the orders of guards or fellow inmates, even up until the point of your own escape, and whenever I did finally make it out, I never felt like I had outsmarted anyone.

There are some great ideas behind The Escapists, but the game falls just short on about every end. This entry in the seemingly neverending stream of games based around crafting, while it does have several quirks that make it stand out, fails to captivate and never feels fun.

Spencer Campbell has summited many mountains just to shout, “Video games are for nerds!!” After extensive scientific testing, he has concluded that they are. He plans on accepting his Nobel Prize as soon as the dorks in Sweden return his calls.
Related Articles: The Escapists
Share
Tweet
Share
Submit