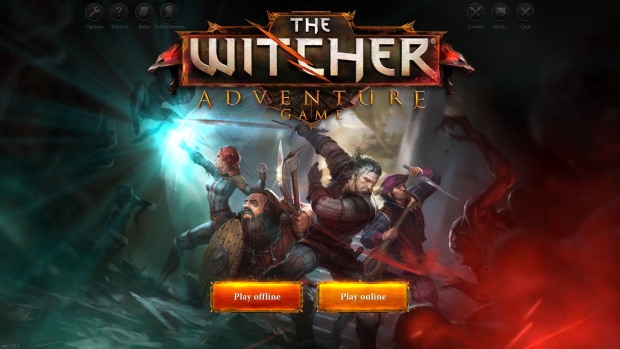 The Witcher series is known for its fantastic storytelling, interesting characters, and solid action, all of which have permeated not only the stories by Andrzej Sapkowski, but also the hugely popular video games developed by CD Projekt RED. The lore is strong, the characters are deep, and the land is lush. Now the Witcher universe has been tapped for board gaming. And in a strange, but intriguing, turn of events, the board game has been developed as a video game. (Please note: this review is only addressing the virtual board game, so while I will be addressing mechanics of the core gameplay, I have not had the “feel” of the physical game)

Like any good adventure game, gameplay revolves around quests. In this case, each player has a distinct quest that they choose at the outset of the game. Each quest also has side-quests and goals that garner victory points. Depending on what length of game the players want, they will denote an amount of quests that need to be completed in order to trigger the end of the game. When the game ends, players will compare victory points and the player with the highest amount will win.

The mechanics aren’t all that complicated, as the game mainly consists of traveling around a map and collecting clues that will turn into hard evidence and end up completing your quest upon arrival in a specific city. There is also a war track that essentially updates the monsters and obstacles in different regions. Die rolls determine victory among most challenges, with card buffs and special abilities that can modify the results. These die tests can spell the difference between taking down a prized beast and losing one of your abilities until you nurse your wounds via a rest action. Much of the gameplay is fairly reminiscent of Eldritch Horror, another Fantasy Flight game, and, unfortunately, this becomes a detriment to the Witcher theme and experience. I enjoy the mechanics of Eldritch Horror and can see how and why the designers would decide to incorporate elements of them into The Witcher, yet I feel like the implementation makes the game feel more like a checklist and less like a rousing adventure.

Part of the problem lies in a misunderstanding of what makes The Witcher exciting. Take combat, for instance. I don’t think the unpredictability of die rolls makes for good Witcher battles. Geralt is wily, studious, strong, and knows a number of fighting techniques. However, in the game, it seems as if none of this matters, because it all comes down to rolling some dice and maybe playing a card or two, hoping that the battle goes well. Despite the fact that there are four characters, each with semi-distinct abilities and dice, it all feels characterless. I think this symptom stems from a very basic design misstep.

The Witcher is very much a story-driven franchise that holds dear to plot development and character integrity, while weaving a tapestry of quests and events into the action. I don’t feel that weight and detail while playing this game. I feel as if the mechanics are meant to serve this notion, but they don’t cycle well together and everything feels like a series of other games that have been patched together in an attempt to make a cohesive design. There is no doubt that the game feels smooth and methodical; that there is a sense we are in a world of intrigue and danger. Yet, I couldn’t help but feel like the things I was doing didn’t really matter and the things my opponents were doing didn’t really matter and that we were all just playing semi-interactive solitaire, with a swingy vibe.

I think what this game needed was a different identity from the outset, or perhaps a mechanic that took the main gameplay and made it more impactful and interesting. A campaign mode immediately comes to mind. Something which ebbs and flows and allows for a little more logic and strategy – studying monsters, utilizing specific combat strategies, and slaying them with a finer attention to unique qualities rather than hopefully getting a good combat card and some decent rolls. I really view this game as little more than a whirling dervish with very little player decision. In a game like Eldritch Horror (the obvious influence), this makes sense. First, it is a cooperative game, and this allows for smaller decision pools, as each choice made addresses some need. And the lack of player control adds to the thematic elements of Eldritch Horror, as the universe feels insurmountable and foreboding – as it should be in Lovecraftian fashion. In The Witcher, it just feels kind of lazy and boring. This is partly because it is a game of competition. When the game plays you while you’re trying to compete, frustration and/or boredom sets in and you feel like the decisions you’re making aren’t really adding up to much or are already pre-programmed due to the demands of the quest.

In regards to the digital version of the game, there is a complete disconnect to the other players, especially when playing against bots. Their actions all move so quickly that it results in dead space between your turns. You already have a plan of action because the gameplay is so straight-forward, but now you have to wait through automated moves that take up enough time to be sleep-inducing, but shoot by fast enough to completely remove you from what exactly they are doing. It also undermines whatever story elements may arise in their path, because you can’t take in exactly what they are doing unless you completely slow down the game and examine their quests and side-quests and study their every move. Either way, the flavor disappears and nothing seems cohesive or compelling. Had players been forced to work together in some way (beyond the somewhat trivial “cooperative” side-quests this game employs), this sort of thematic disconnect and downtime could be avoided and the flavor of The Witcher would be savored more precisely.

The Witcher: Adventure game for PC is a tough nut to crack. It’s not as if the elements to a great game aren’t there. It’s not as if there isn’t a somewhat compelling scheme. I found myself enjoying certain elements, such as seeking out the best path to completion of a quest. It’s just that everything is so distant feeling that there is difficulty being immersed and involved in the action. I suppose part of this is the natural outcome of playing a board game in a digital format, but nevertheless, I never quite felt the satisfaction of moving pieces around and developing a strategy or imagining an adventure the way I was probably supposed to.

For all of its faults, The Witcher: Adventure game for PC has an undeniable allure. The artwork is nice and evocative, and the focus on questing is appropriate to the theme. However, there are other games that come immediately to mind which accomplish the feeling of Witcher adventures and plot development better than this does. If you are a fan of the franchise, by all means, consider adding this game to your collection, as it will let you slide into the shoes of some of your favorite characters. For all others, look elsewhere for your adventuring and competitive needs.