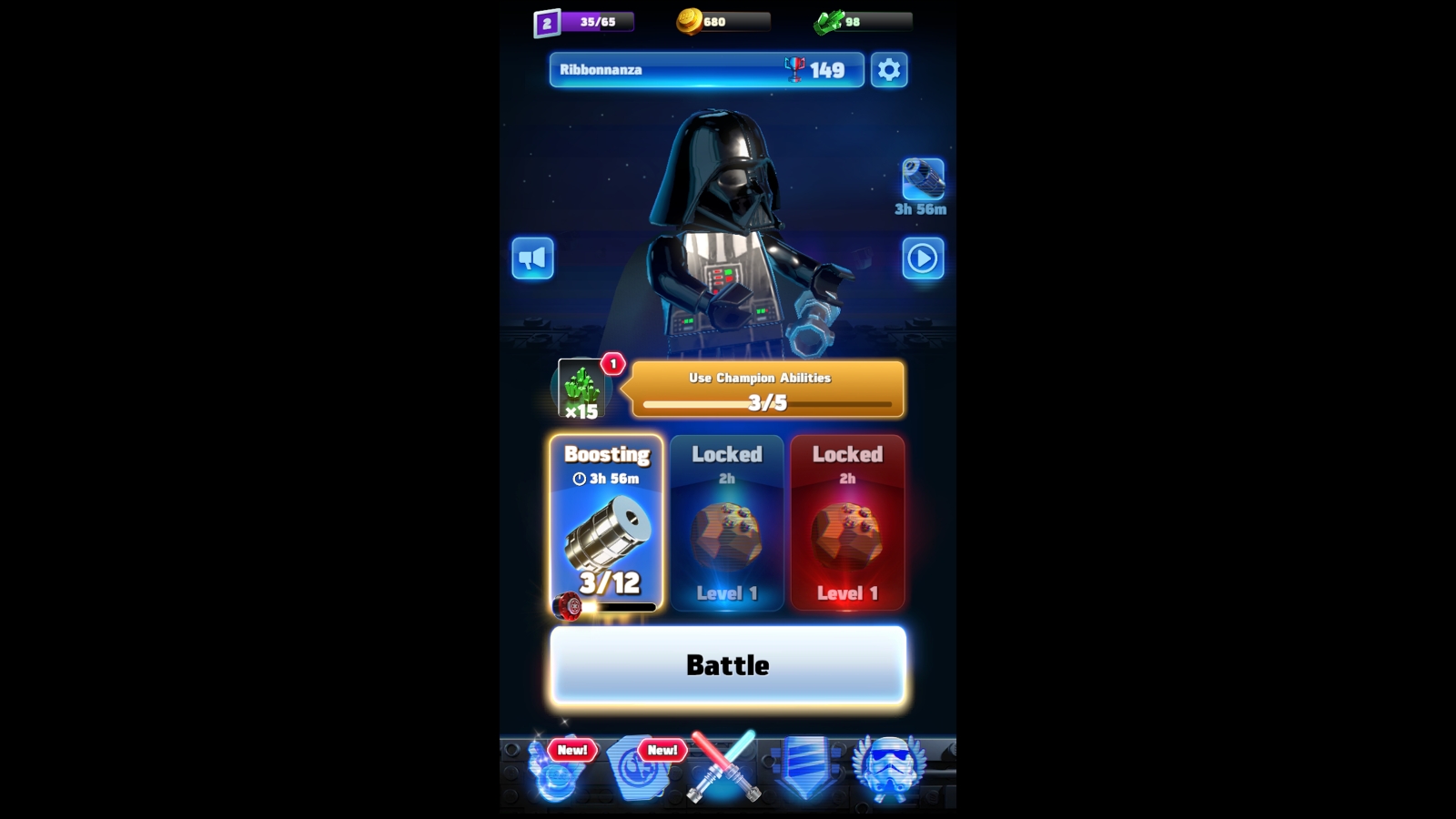 It’s been a long time since I played a LEGO Star Wars game. I greatly enjoyed the first two, but the formula stopped appealing to me after it became a bit too oversaturated. LEGO Star Wars Battles is shaking things up quite a bit, diving into a completely new genre while retaining the charm of the originals. Does this mobile tower defense bring back the magic?

As I said in my preview, if you’ve played Final Fantasy VII Remake’s Fort Condor minigame you’ll feel right at home here. Two players are situated at opposite ends of a vertical board with the goal of destroying your opponent’s base. There are two buildable towers on each side with a fifth in the center, if neither base is destroyed when time runs out whoever has the most towers wins. In the event of a tie, the game goes into overtime with the player who takes advantage first being declared the winner. As your bar at the bottom of the screen fills up over time, you can spend segments of the bar to place units or build a tower. 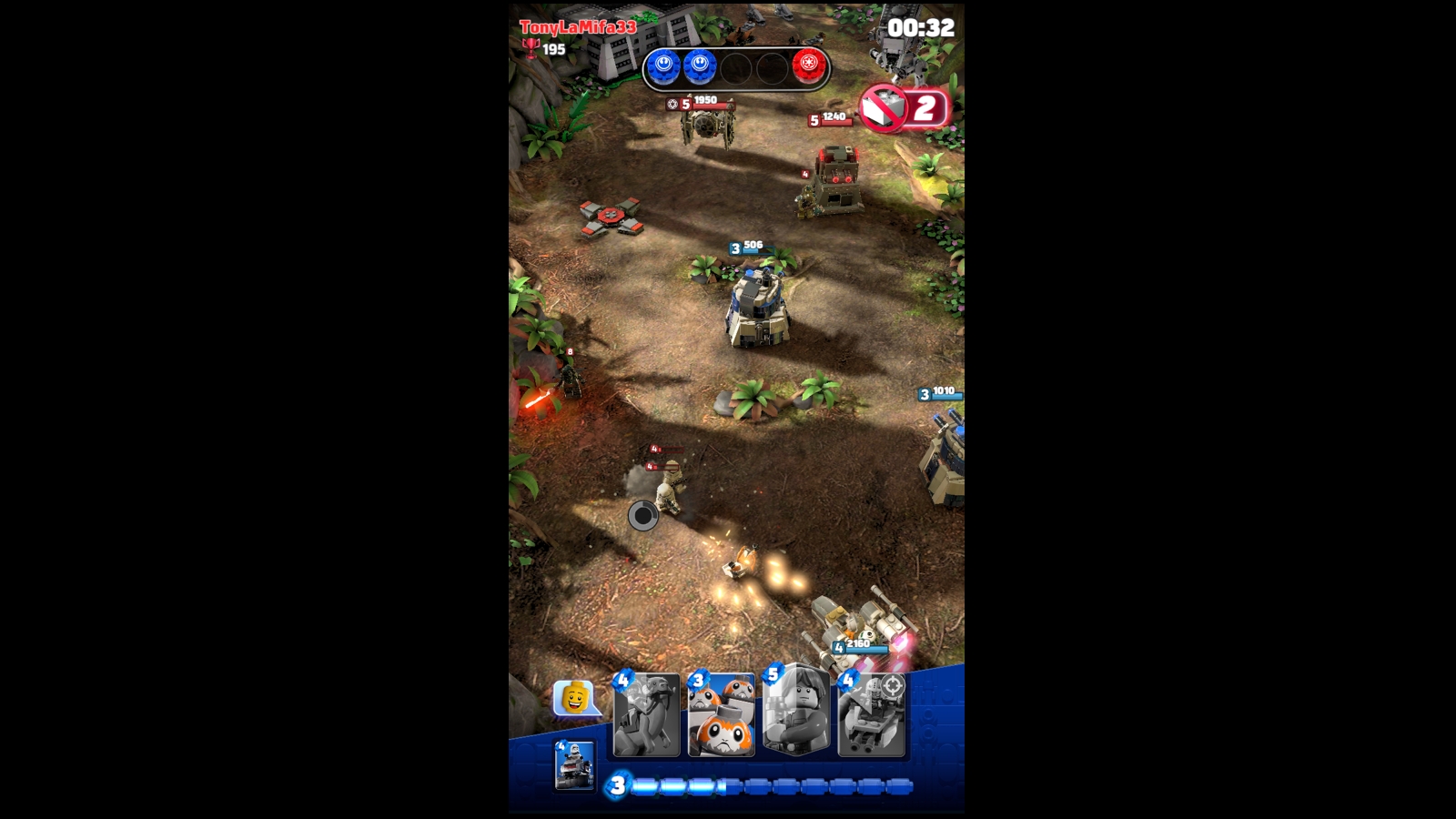 Every unit costs a different amount of ATB (since we’re still using the Final Fantasy analogy) with more powerful ones, such as champions, costing more. You place units by dragging their card from the bottom of the screen into the field of play, up to a line representing how much of the battlefield you control with towers. Each unit is good at one thing and bad at another, for example the porgs you can use on the LIght side have strength in numbers but die very easily making them great at taking out more tanky units that only attack towers. You need to keep these strengths and weaknesses in mind when building your deck.

That’s the basic gist of how the game plays, and it can be a lot of fun. Making sure you use your ATB wisely by placing units in the right place at the right time and deciding if it’s worth building a tower or just attacking head on. There’s a surprising amount of strategy in every match despite lasting only two and a half minutes. When you’re matched with an equal opponent, both of you are constantly in an entertaining struggle for only the slightest of leads to get those sweet rewards from coming out victorious.

By winning battles against other players online, you’ll be rewarded with currency, rank points, and scans which hold new cards inside. Scans do take real world time to unlock, but you can instantly unlock them as well as increase the rarity and amount of the cards inside by winning or losing battles with stars. The stars are basically “points” in a match gained by having a tower on the field and destroying your opponent’s base is an automatic 5 star victory. These stars are cumulative with regards to scans, so once you hit the threshold it unlocks immediately and frees up one of your three slots for another scan.

The actual content of a scan is determined by what planet you receive it from. The planets basically serve as a ranking system, with higher tiers unlocking after you rank up enough, but you can go back to any planet you’ve unlocked whenever you wish. And you’ll want to go back to planets frequently to get more of the cards you already have, as you can level them up once you have enough dupes and increase their HP, attack, and other stats. 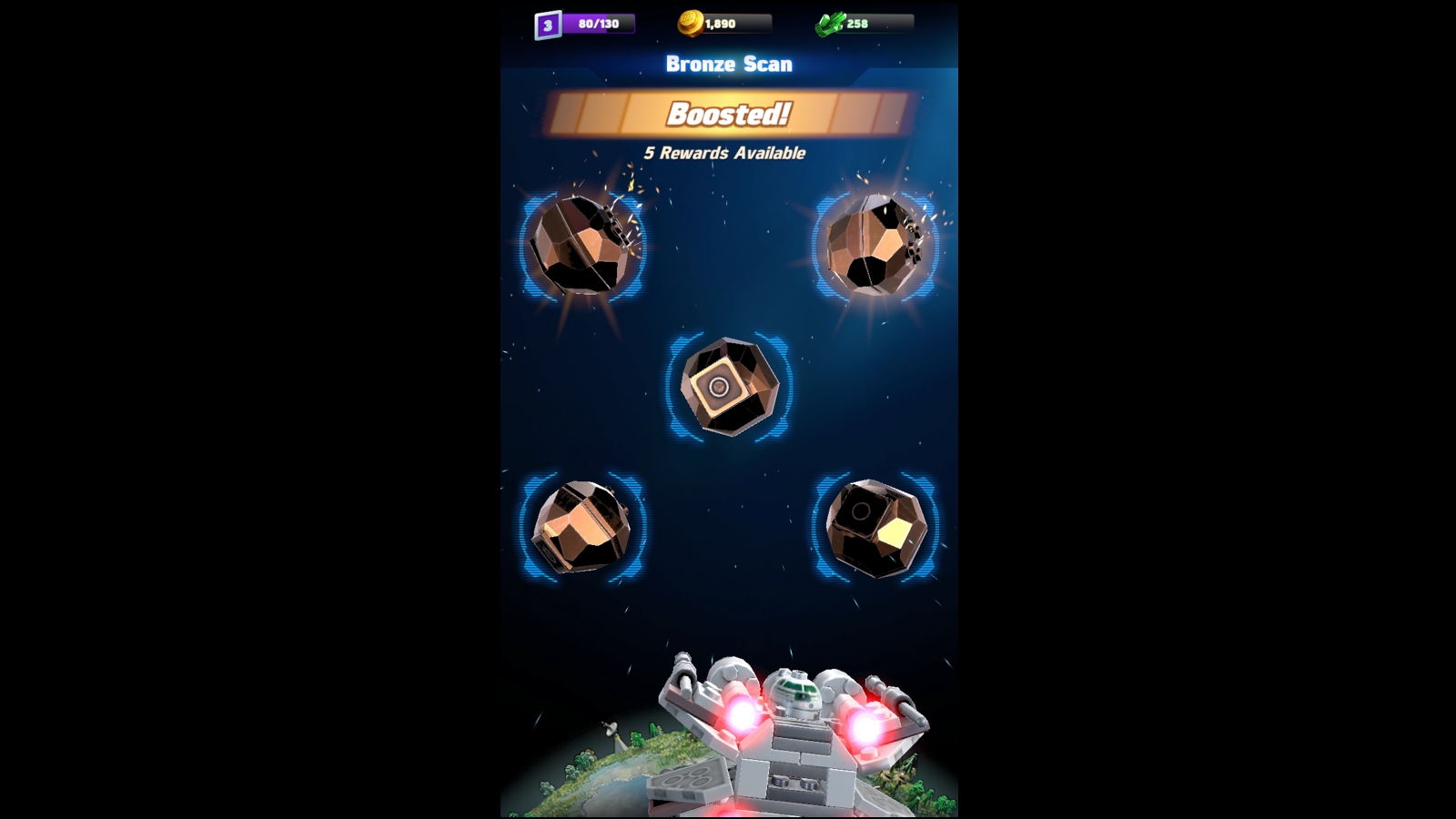 This actually brings us to my biggest complaint with Battles, it can feel very uneven. It may be just the matchmaking, but in my experience evenly matched fights are very rare – you’re either the one crushing your opponent into the dust or the one being crushed. This has nothing to do with rank or skill but entirely with how much a player has leveled up their units. A character’s strength increases exponentially with a level sometimes completely negating a counter. For example, the Champions Luke and Darth Vader are evenly matched in their base forms, but with just one level up (which is extremely rare in my experience) one can absolutely destroy the other in a matter of moments. Even if you have a better strategy, a player who’s put in more time than you is almost always guaranteed the win simply because their units have better stats.

I can see the merits to this approach, it allows kids to get at least some wins if they play enough, but as an adult who just wants to play a quick match or two occasionally this becomes very annoying very quickly seeing as you lose rank points upon defeat, slowing your progress even more. It has good intentions, but is fundamentally flawed in its execution. As fun as battles can be, it’s discouraging to lose so frequently through what feels like no fault of your own. 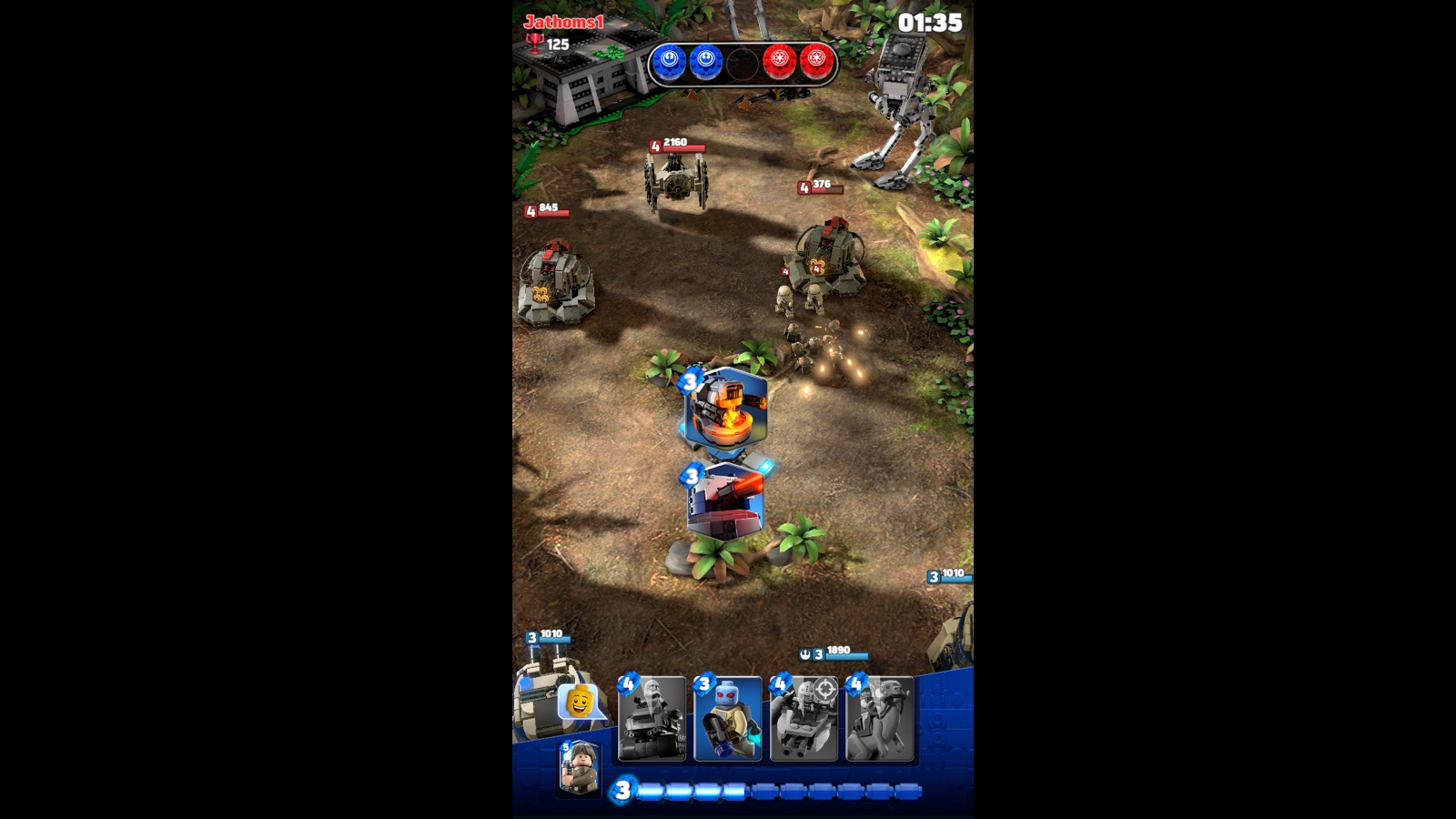 While all that may make the game sound like it’s pay to win, it actually isn’t. Being only available through Apple Arcade, there’s not a microtransaction in sight; the only money you can spend on this game is with your subscription to Apple’s service. It does feel like a game that could include microtransactions, what with two currencies (studs and gems) and new champions either being very rare drops or very expensive gem purchases, but thankfully this is just a game you download and play. The more time you put in, the more you get out of it.

Lastly, let’s touch on the visuals and music. The incredible John William soundtrack is translated directly from the movies and, while it doesn’t loop properly occasionally and transitions betweens tunes sounds awkward, it’s still so good I don’t mind the flaws with implementation. You’ll also hear typical Star Wars and LEGO sound effects, like blaster and building noises, so it’s what you would expect in the audio department. While gameplay is viewed from very far away, the environments are gorgeous with realtime lighting being a standout. The characters themselves have charming animations and look like real LEGOs with scuff marks and scratches while adding details like jiggly bellies that can’t be replicated in real life. If nothing else, the game is very fun to look at.

David is the kind of person to wear his heart on his sleeve. He can find positives in anything, like this is a person who loved Star Fox Zero to death. You’ll see him playing all kinds of games: AAAs, Indies, game jam games, games of all genres, and writing about them! Here. On this website. When not writing or playing games, you can find David making music, games, or enjoying a good book. David’s favorite games include NieR: Automata, Mother 3, and Gravity Rush.
Related Articles: LEGO Star Wars Battles
Share
Tweet
Share
Submit