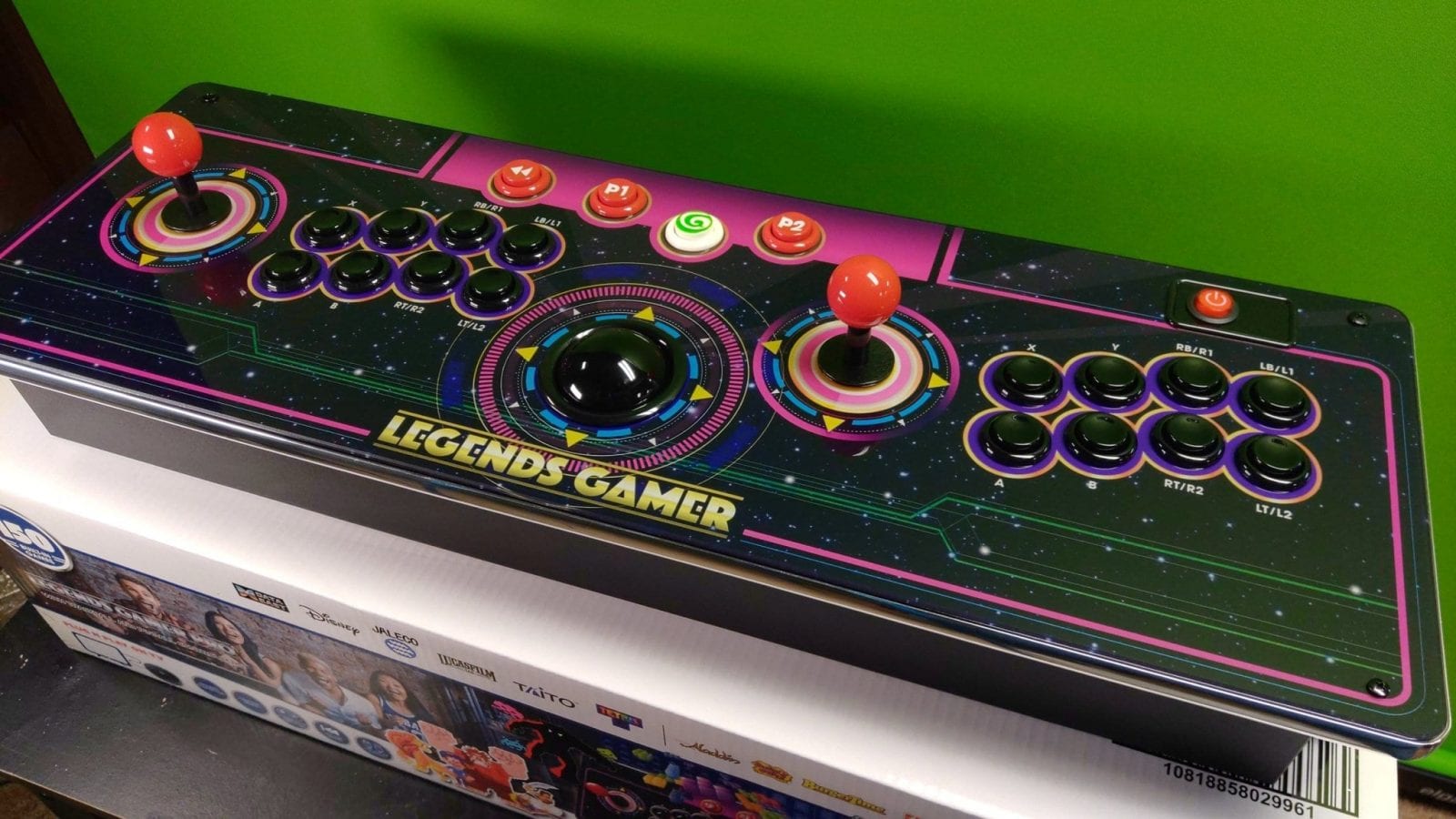 Nostalgia is a heck of a thing. It drives us to purchase products, sometimes even bad ones, just because of how it makes us feel. I mean, movies and games have been hijacking that for years, and in the last decade it feels like that’s been more prevalent than it’s ever been. While it’s unfortunate that some use this tactic irresponsibly, there are companies who do it right, and AtGames accomplishes this with the recent Legends Gamer Pro.

So first off let’s get the size of this control top out of the way; it’s massive! While there are different models for different people, you’re going to want to make sure you have some space if you grab the Legends Gamer Pro. Not only is this thing built for 2 players, but each person has access to a joystick and eight buttons. That’s not including the extra two buttons on the side for what I’m assuming is for pinball games and a trackball, as well as a menu, player 1 and 2, and rewind button. It’s as big, if not bigger, than a two-player arcade machine deck would be. The only thing I both like and don’t like is the glossy finish. It’s an absolutely beautiful deck, but it’s definitely going to be a fingerprint magnet.

One of the most impressive things about the control top is how well all of the inputs work. I love the crisp click of the buttons as you press them, and the joystick feels just as responsive. It’s just like you’re back at the arcade! Something I did notice while playing is there were moments where it seemed I had input lag, but I get the feeling that was just the game. You can also utilize the arcade stick with other devices, but as of the time of this writing I couldn’t find many details as to what those devices may be.

I also really like the Legends Gamer Pro system disc. It’s a little circle that functions just like an Amazon Fire Stick, housing the all-important software and firmware of the package. The disc also weighs nearly nothing, making it quite simple to move from TV to TV. It had more ports on it than I expected, with an ethernet port for hardwiring your internet connection, an HDMI, and a USB port for customization options (more on that later). There’s also a button for syncing controllers to it as well. One thing of interest, it seems the arcade fight stick isn’t immediately synced with the disc, and that feels a bit unnecessary. Maybe it was just mine, but I don’t see why it would be a hassle to have the arcade fight stick “pre-synced”. The one thing oddly missing on the disc is a power button, and I wish they’d have added one. Turning it off involves unplugging it, and I get a bit nervous anytime I have to unplug an electronic device to turn it off.

Obviously you don’t buy this thing just to look at it, it’s for the games! The Legends Gamer Pro is loaded with 150 games, and has a large number of licensed ones. Fan favorites like Space Invaders, Super Star Wars, Aladdin, Bubble Bobble, and others are present, although it does seem for every big brand title there seems to be two lesser known ones. Seriously, I have no idea what Soldam is, even though it sounds interesting. Like many classic systems before it, the Legends Gamer Pro also features several quality of life improvements like rewinding your game, save slots for going back to them, and even online leaderboards. I’m happy to see the system not just lumping a bunch of games together and saying here you go. AtGames is making a concerted effort to allow your nostalgia to be convenient as well as accessible.

The only thing I will mention is that it’s imperative you connect the system to the internet. While I’m sure later units may come preloaded with the latest firmware, the UI and features changed significantly once I updated. There are several features I would have completely missed out on if not for connecting to the internet and updating. One feature that’s amazing to me (and missing without that update) is the ability to livestream. You have the option of streaming your gameplay to YouTube, Twitch, or Facebook, directly from the system. This is something I never thought I needed, but after seeing it as a possibility, I do.

The crown jewel of the Legends Gamer Pro definitely has to be the customization of the software. AtGames has modified the heck out of it, and allows you to use third party games via their BYOG (Bring Your Own Game) functionality. Things like AddOnX and CoinOpsX provide new but safe ways to play third party games via flash drives with a modern feel to it. I can’t say I understand all the lingo and I’m not one to try and customize software, but with how easy the Legends Gamer Pro makes it, I’m tempted to try.

The Legends Gamer Pro is an absolute win for any retro gamer. While it does pack a premium price which may discourage the more casual player, it’s packed with enough games, features, and customization to justify the cost. The control top is also a sight to behold, and will easily accommodate two players. In the end, the Legends Gamer Pro will leave you feeling like you never left the arcade.

David Burdette is a gamer/writer/content creator from TN and Lead Editor for Gaming Trend. He loves Playstation, Star Wars, Marvel, and many other fandoms. He also plays way too much Call Of Duty. You can chat with him on Twitter @SplitEnd89.
Related Articles: Legends Gamer Pro
Share
Tweet
Share
Submit