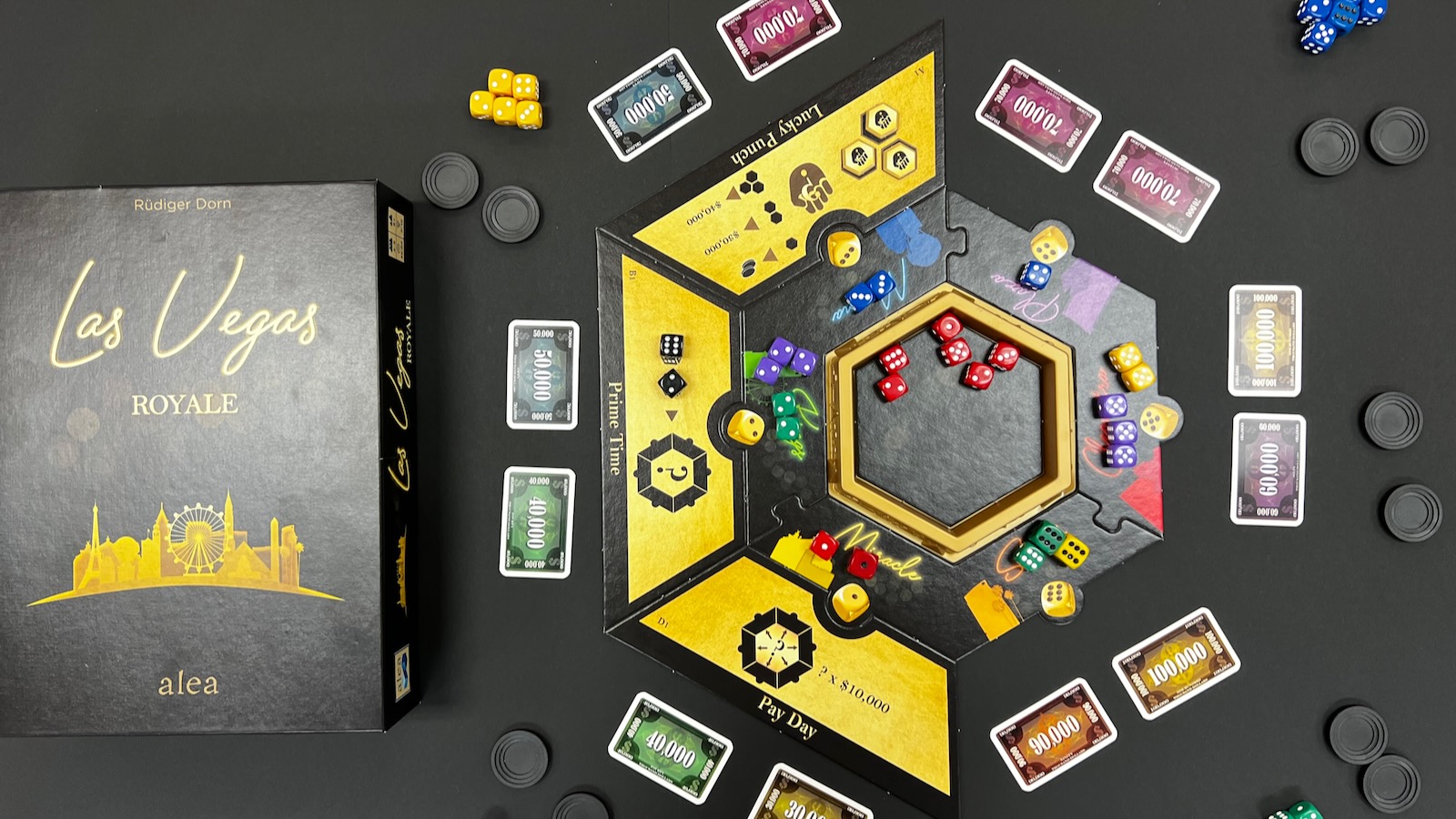 On my first visit to Las Vegas, I was immediately drawn to the craps table. Being 18, they immediately steered me the other way. When I returned, at the age of 21, the allure of the dice still drew me in. Something about the chips on the table, the camaraderie of the people playing, or just the sheer luck of the roll all made for an enjoyable experience. Since the promise of another trip to Vegas is in the distant future, I was happy to find Las Vegas Royale to fill that small void. 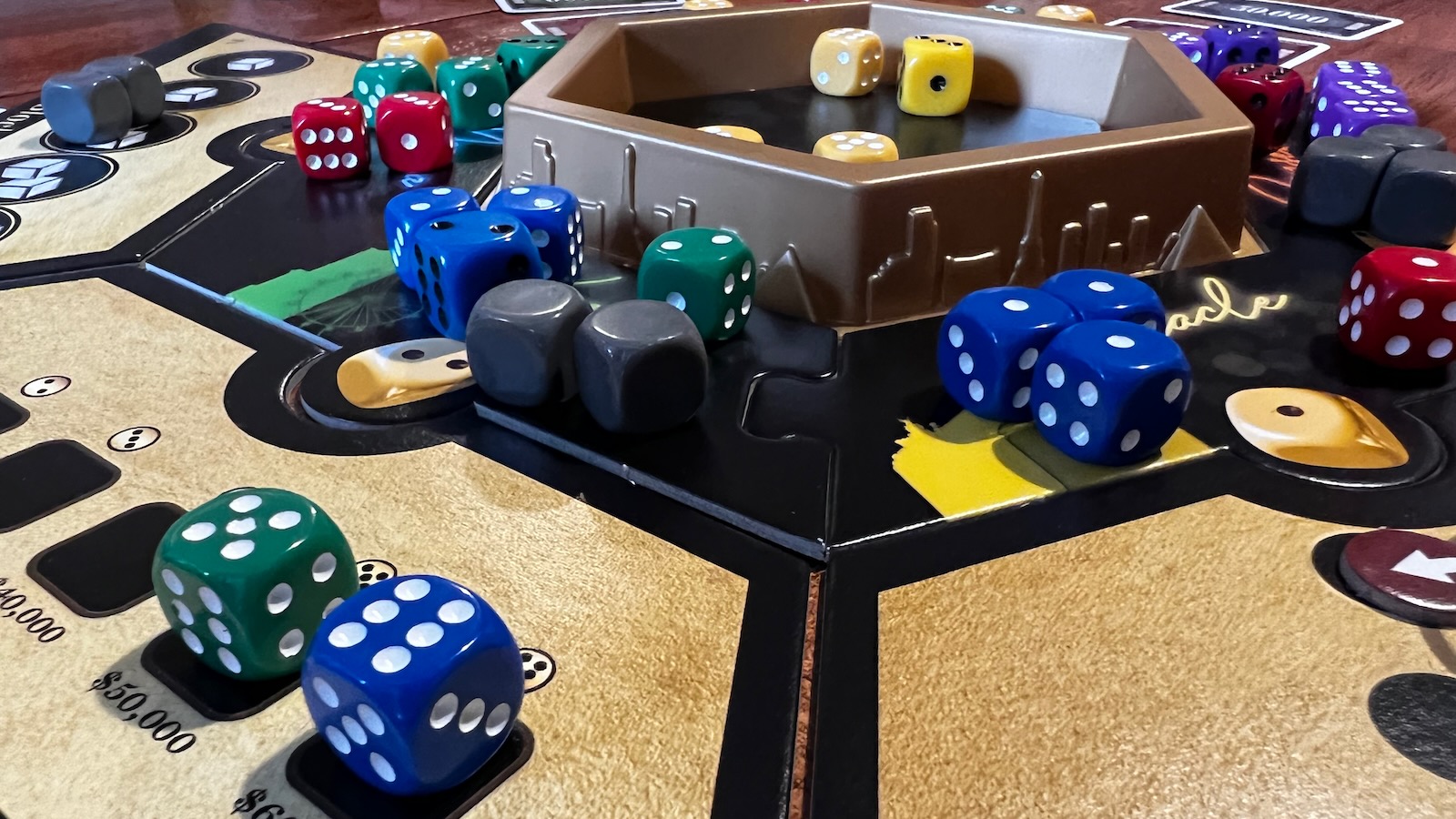 Las Vegas Royale is a 2019 release from designer Rüdiger Dorn and published by alea as part of their revised big box series of games. Las Vegas Royale takes the basics of the 2012 Las Vegas game and combines them with some of the elements from the Las Vegas Boulevard expansion from 2014.

In Las Vegas Royale, players are invited to visit six casinos representing the six values on a die. Players are given seven regular dice and one large die that counts twice in their scoring. The goal of Las Vegas Royale is to gain the most money and gameplay takes place over three rounds. Each player turn consists of rolling all the dice the players have in their current possession and assigning all of one value of dice to the matching casino. If a player rolled three fours and two fives, they would have to commit all the fours to the matching casino or all the fives to its match. Guiding the choices are different denominations of money up for grabs at the end of the round in each casino. The player with the most dice will win the higher of the two money cards and the second place wins the lower card. If players have the same number of dice at a location, the dice are canceled out which allows for other players to sneak in and grab the money. Players are also given two poker chips per round that they can hang on to for $10,000 a piece at the end of the game, or they can trade in to not place a round of rolled dice to see if something better comes along. 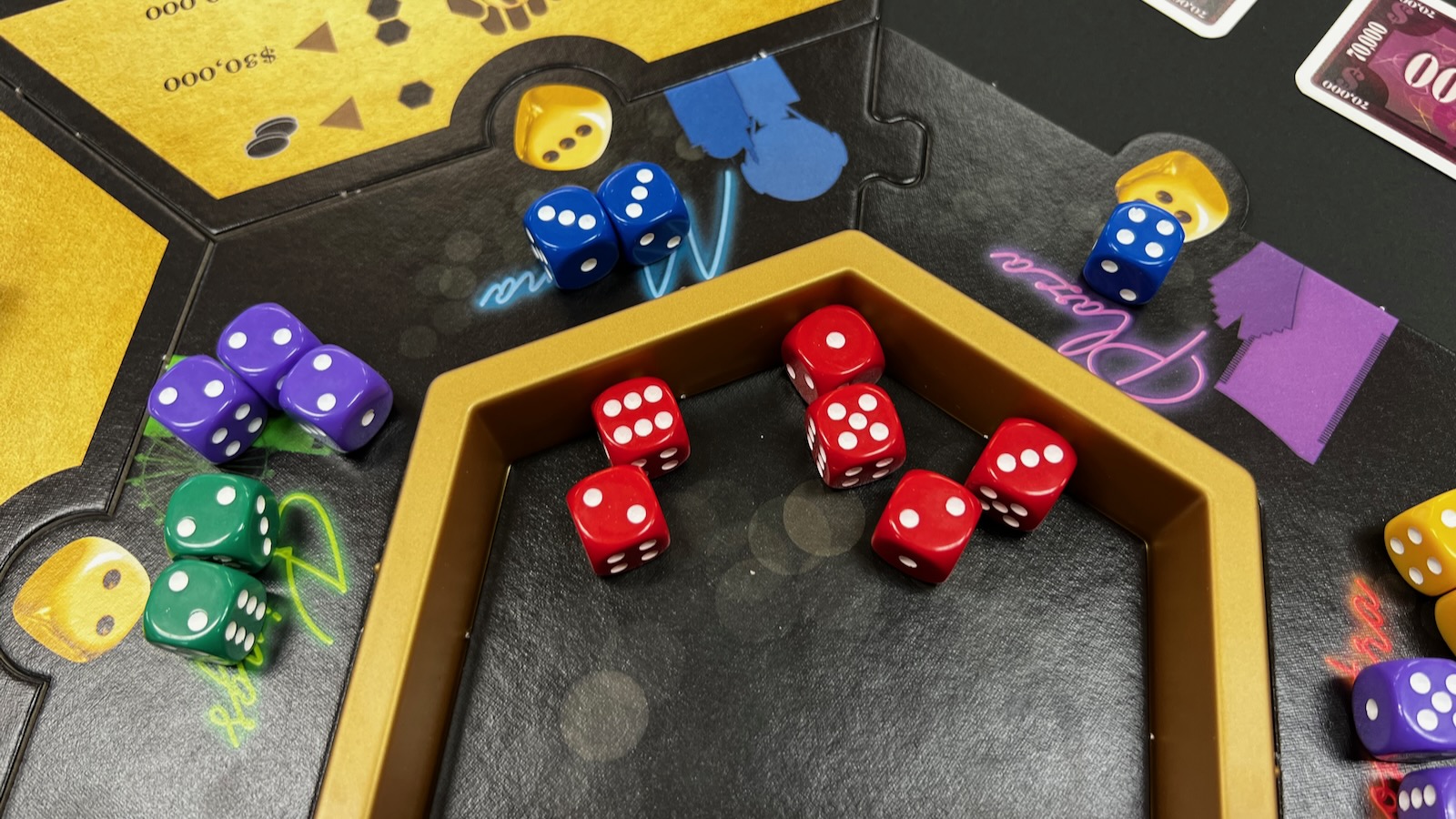 After mastering the basic game, players are encouraged to add in the new items to modify gameplay. A series of sixteen expansion tiles can be added to casinos to add some different strategies to players’ decisions. Each round, three new expansion tiles are added. Some tiles allow players to play mini games to earn more poker chips or even money. In Lucky Punch, players take one, two, or three tiles into a closed fist. The player to their left guesses how many tiles are in the player’s hand. If they guess correctly, nothing happens, but if they guess wrong, the player with the tiles gets a reward matching the number of tiles in their hand. Some of the expansions allow players to modify the game board. The Block It! tile gives players an opportunity to place neutral dice on another space to block players from scoring and the No Entry! tile allows players to temporarily block casinos from receiving more dice. Some tiles even allow players to roll extra dice, give extra incentives for end game scoring, and another tile  makes players pay money back to the bank. 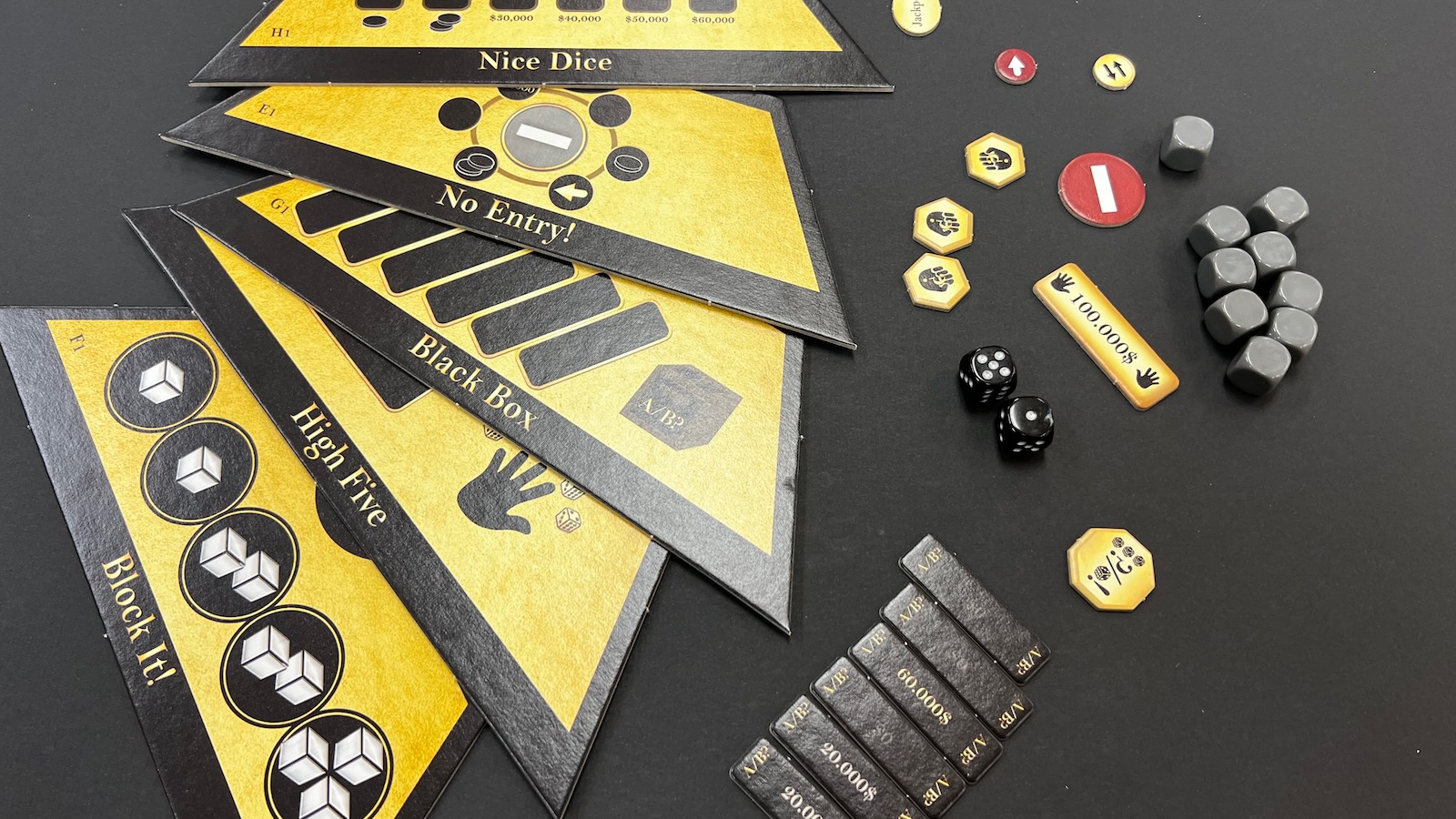 The gameplay of Las Vegas Royale is quick and easy to teach. The varied ages of players at the table had an easy time picking up the basic components and were ready for the expansion tiles after one play. Blocking players from scoring and the timely use of a poker chip to wait out another player rotation were fun elements to include in the game. There were many choice words and angry glances when a dice blocked a player out or leap frogged someone out of scoring position. As expansions were added, some players were drawn to the mini games, forgetting to balance their dice for some lucrative paydays in other casinos. Swapping out the expansion tiles each round also added to the variety and made each round different and engaging. Towards the end of each round, players have to balance spending poker chips to take another turn and cutting their losses to get the most money in the end. 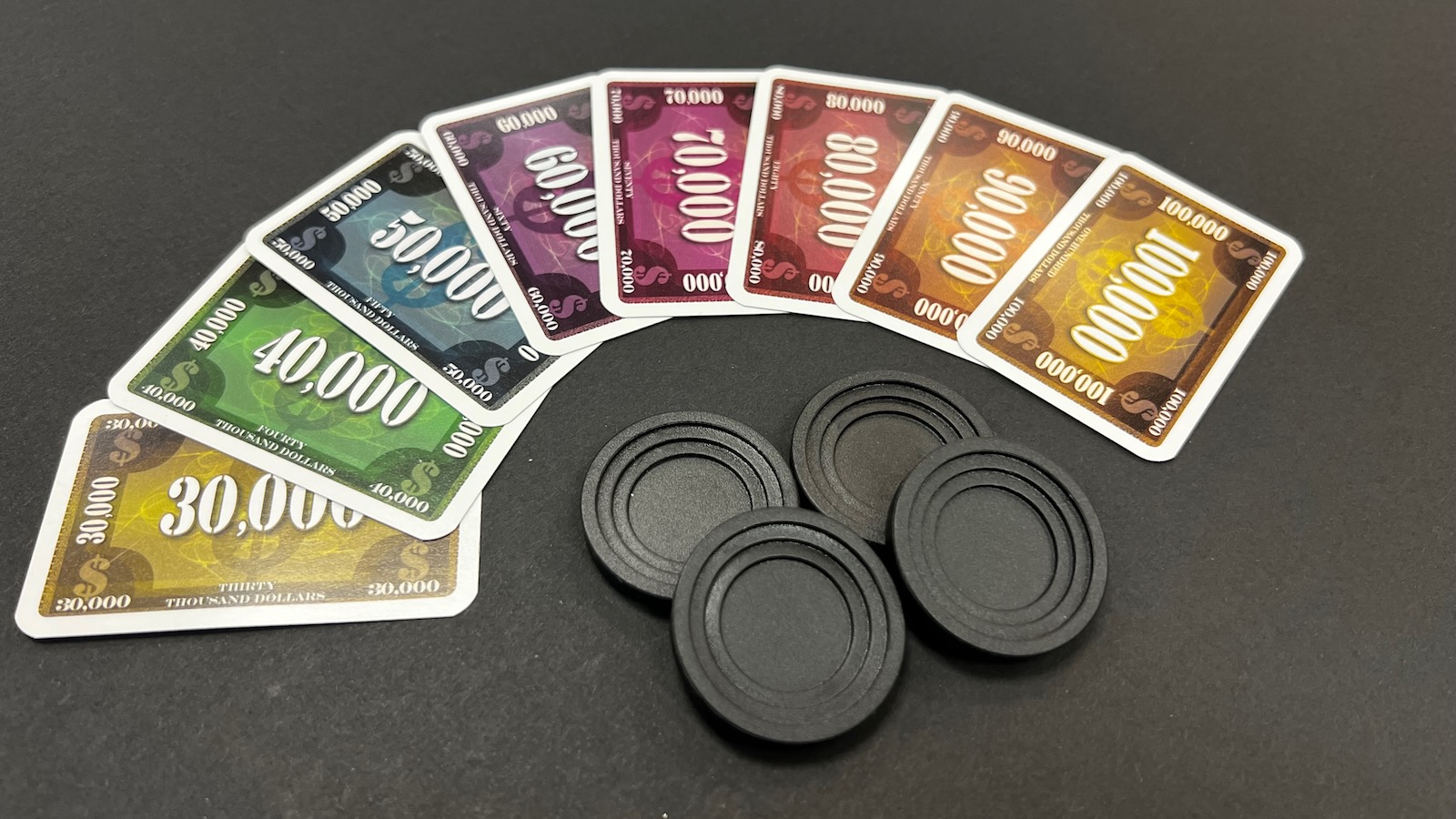 The theme of Las Vegas Royale is well incorporated throughout. While not actually making bets and throwing dice down a long green felted table, there was an element of risk vs. reward in every turn. The addition of the expansions also added some press your luck elements which gave the feel of risking something for hopes of big payout. The aesthetic of the artwork in the casinos and the expansions add to the feel of the Las Vegas setting. 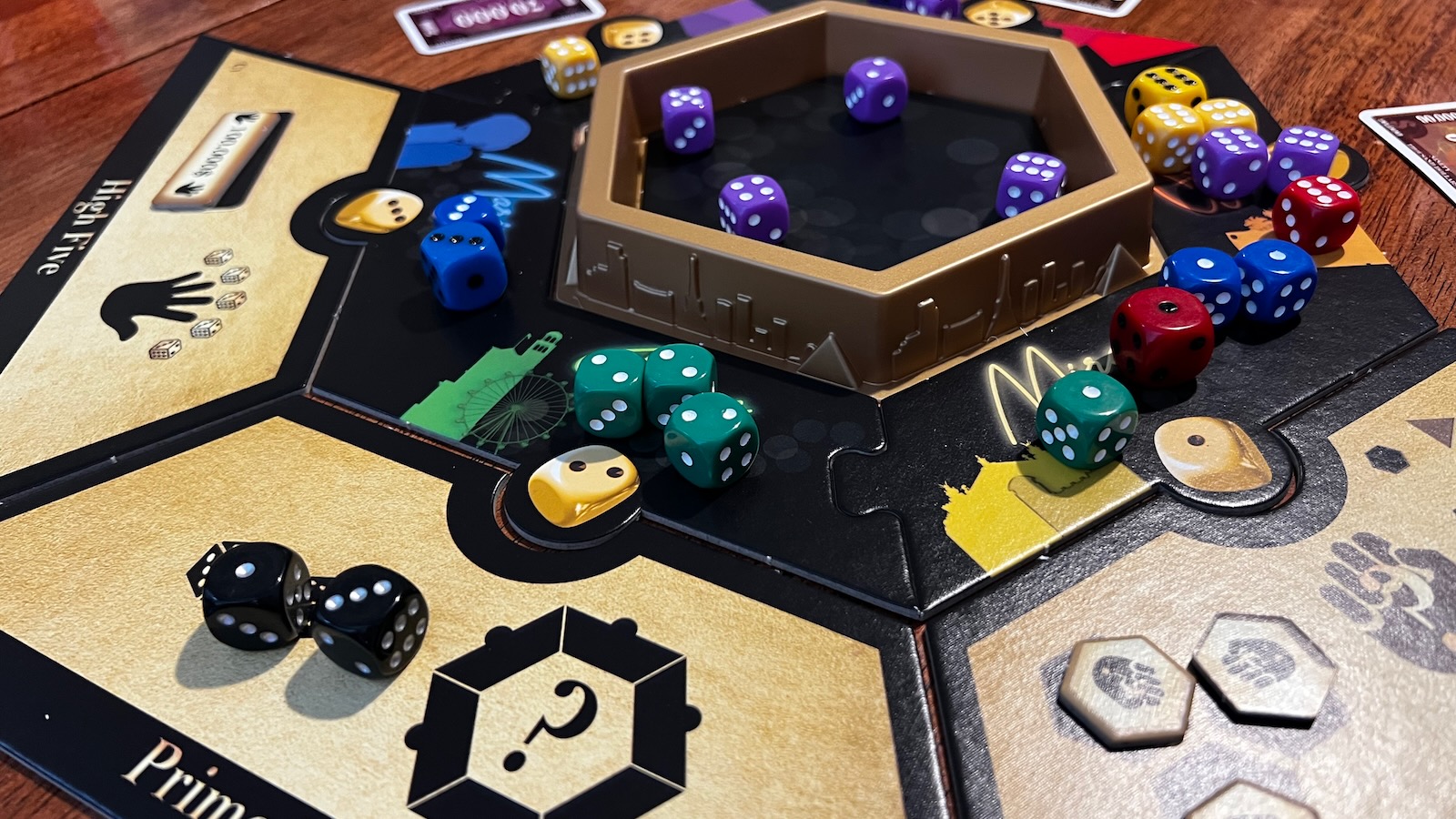 Middle of round one featuring expansions.

The components of the game are unfortunately not as great as the gameplay. The mini cards used for money were very flimsy and already showed wear and tear after a few games of shuffling and use. The poker chips that were included were cheap plastic and wouldn’t even stack well in front of the players. There were also not enough chips to go around for a 5 person game if players were hoarding their chips. Another ten would have helped. While the casino borders around the central dice rolling tray had notches to help them keep together, when expansions were added and dice were rolled, the board constantly had to be reset. The lightweight cardboard combined with the rolling of large amounts of dice made the board travel up and down the table.

Las Vegas Royale is light to medium weight dice rolling fun. The game offers enough strategy to keep different ages engaged and can be scaled to player counts and complexity levels. A great game to start or end the night with friends and family.