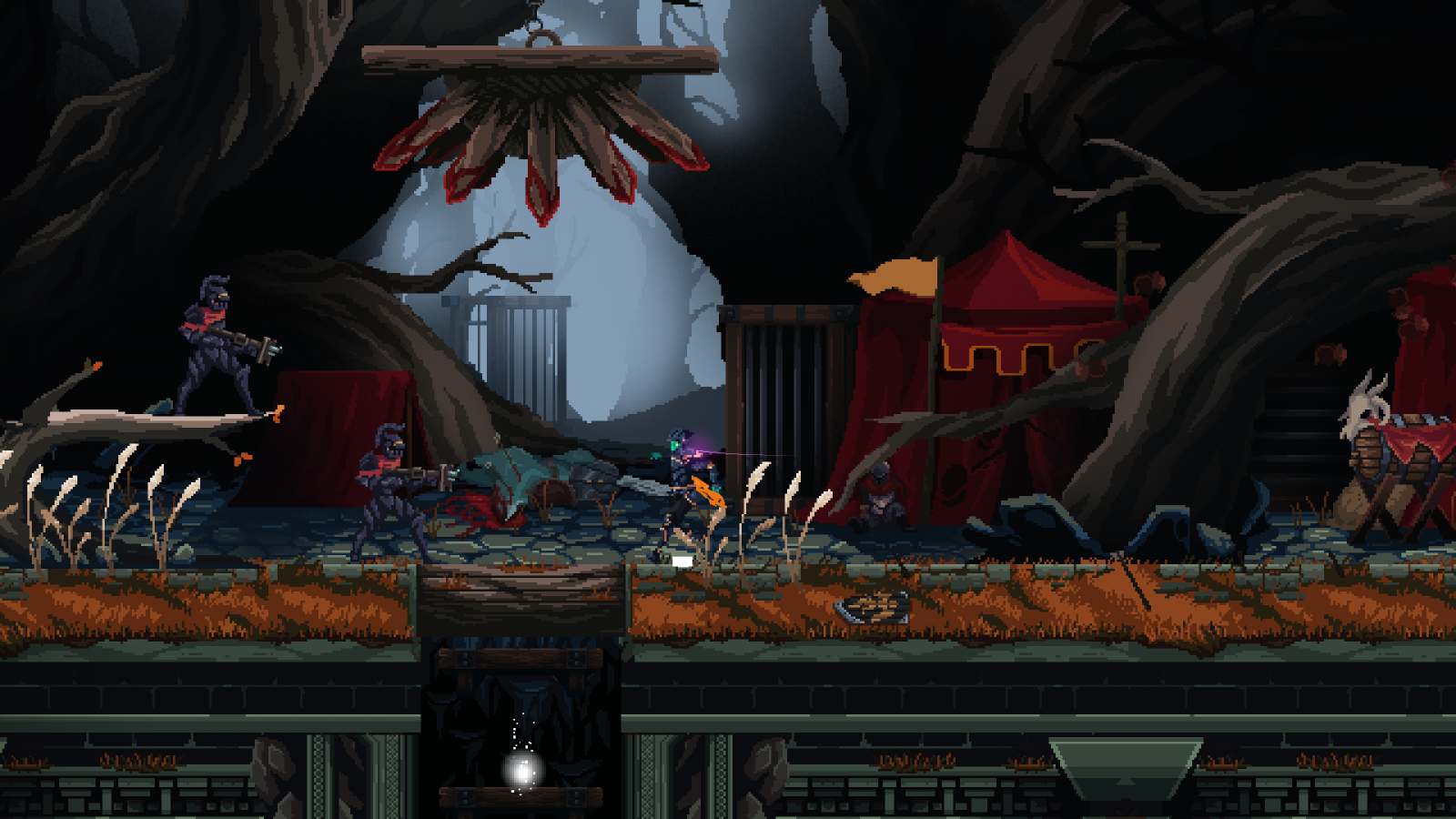 There’s a good chance I liked Death’s Gambit more than you will. To calibrate your expectations, I also think Dragon’s Dogma is one of the best games of all time. That is to say, I like games that take big swings even when they’re not sure they’ll hit, games with gaps where their budgets couldn’t meet their ambitions, grand plans that they’re not quite able to pull off.

At first, Death’s Gambit may not look like it’s trying anything special. It looks more than anything like another attempt at a 2D Dark Souls. There’s even a bit early on where a character makes the reference directly, telling you that your goal is to ring the two bells of awakening before obtaining a vessel — then laughing it off and telling you what you’re really after. (Can we all agree that this trope is the pits? It’s fine to be inspired by another game; you don’t need to jokingly call attention to the fact.) The Dark Souls influence is pervasive, from basic gameplay mechanics all the way down to the sound effects in menus. Death’s Gambit is an extremely challenging game, built around repeatedly making failed expeditions through its levels to learn their layout and the weaknesses of the enemies there. As with Dark Souls, enemies reset when you die, but instead of losing the currency you’ve gained from them, you lose one use of your healing phoenix feather, which functions like an Estus Flask, until you can return to your corpse to retrieve it.

While the broad strokes are there, Death’s Gambit seems to borrow both too much and too little from the Souls games. This is most apparent in its combat. Defeating enemies requires precision and careful stamina management, but the scales always seemed mechanically weighted against you. Your character feels just a bit too slow to counter enemies efficiently, and, particularly in boss fights, hit boxes vary wildly. Bosses’ attacks often hit behind them when they don’t look like they should, and you’ll sometimes take damage from attacks whose animations have finished if you walk into where they just landed. Certain attacks will even wrap around behind you to deal damage even when you have your shield up. At the same time, you can avoid some attacks by standing so that you overlap with the enemy’s sprite.

Yet some elements of Death’s Gambit’s combat stand on their own. Each type of weapon has a different attack pattern (disappointingly, every weapon of the same type handles the same), and your choice makes a huge difference. Greatswords are slow but devastating, scythes deal damage to a huge area around you, and daggers are fast and combo-heavy. It’s nothing revolutionary — and it’s limited compared to variety of move sets in Dark Souls — but it makes your choice of weapon extremely important. Each weapon type also offers special abilities, from dash attacks to incantations that fundamentally change how you attack with a magic tome. These abilities further underscore the difference between weapons, and they’re just fun to use. Despite all its shortcomings, these little touches made me try every single weapon type in the game, and I’m already thinking about playing through again to use some that I couldn’t commit to the first time around.

Well, I’m thinking about playing through most of the game again. Despite all its slipshod charm, I found the game completely infuriating at times. It ramps up the difficulty near the end by simply packing the screen with high-level enemies, including one that’s so poorly animated that it actually makes it difficult to fight as it marches around the room like a stiff-armed toy soldier, chopping everything in its path. Taking on one is a challenge, but taking on a mob of them mixed with other enemies seemed futile. I finally admitted defeated and simply sprinted through the final level to reach the boss. The area actually contains two bosses, both of which prey on the limitations of your evasive capabilities, making them more frustrating than challenging.

It’s a shame, since most of the other bosses were far more interesting, and designed so much around the idea that they’ll take multiple tries to defeat that you’re shown how many attempts you’ve made each time you face one. You’ll fight a boss that gives you two opponents of vastly different scale, some manipulate the environment to kill you, and even one that eschews the concept of a boss altogether and throws you into a dexterity test that seems almost metaphorical. In almost every fight, some element of the game’s design makes it harder than it should be, but each was certainly memorable. Bosses are far more than skill checks,as almost every one ties into the game’s story in an interesting way. Some have far more bearing on the world at large than others, but even the minor ones at least carry some lore relevant to their little corner of the world.

The areas these bosses rule over are a jumble in both aesthetic and quality. From an arctic tribe defended by wolf-folk to an underground bunker, they run the gamut stylistically. There’s even an underwater level, which, in accordance with the ancient laws, is almost inconceivably frustrating. Each level has its own tricks, like spear traps or a strange “polarity” mechanic that boosts your damage against certain enemies, but some fail to make much of an impression, and they’re all extremely short. Just when I started to vibe with any particular area, I would find myself in front of its boss. It left me perpetually wanting to know more about the world I was wandering through, despite it seeming to be assembled somewhat at random.

Death’s Gambit’s story is a prime example of how the game both over and under commits to its ideas. It borrows the Souls convention of putting lore into item descriptions, but never sells the idea that these snippets are fragments of a fully realized world rather than isolated bits of trivia. For the most part, its narrative is much more straightforward. It’s told primarily through short cutscenes of the game’s characters, most notably, Death. At times, in probably the game’s most original flourish, you’re whisked away from the real world for a non-linear bit of narrative. You find yourself in your childhood home, on a secluded island, or in a lake of blood, never entirely sure whether you’re remembering, foretelling, or actually being transported to some other dimension. The story veers into discussions of mortality and the meaning of life, sometimes slamming head-on into them. Its Philosophy 101 themes are intriguing when they’re talked about obliquely, but the more they’re given the spotlight, the less illuminating they actually are. Still, I was interested enough that I did try to piece together item descriptions and figure out what was going on behind the scenes.

The narrative gets a huge helping hand from the game’s voice actors, every one of whom gave a fantastic performance. I honestly can’t believe the quality of the voice acting in such a comparatively small game, especially when it’s something that even the biggest games often struggle with. They may not all be perfect, but there’s not a bad performance in the bunch, and they absolutely nail the tone of the game. The quality of the game’s music also took me by surprise. The soundtrack is mournful but strangely lilting, like it came from the bleakest Miyazaki film imaginable. It sells the atmosphere of a land simultaneously gifted and cursed with eternal life. The same can be said of the game’s art, which is pretty inconsistent, but hits a whole lot more than it misses. Even small details like animals roaming the levels and minutiae in the deep background are treated with care. Most enemies look great, especially the bosses. There are some shoddy animations and less-inspired designs in the mix, but they’re easily overshadowed by the otherwise stunning art.

What makes Souls games so great is the sense that their settings are real, complete, and governed by immutable laws. That’s not the case here. The world of Death’s Gambit feels far from complete, and every NPC conversation, meticulously designed art asset, and scrap of lore is straining to maintain the illusion that they’re part of a cohesive whole. But this illusion is constantly being undermined by myriad inconsistencies, bugs, and shortcomings that seem to have slipped through QA for lack of time or money. Some of these problems provide enough reason to call the game a failure. It crashed on me more than one, for example, and the developers have had to patch out several game-breaking bugs in the first few days after release. But some can be overlooked if you buy into what Death’s Gambit is trying to do. Every time I fell through a solid-looking platform, found an enemy floating in mid-air, or saw a blank black wall that clearly should have been background art, it felt like seeing a boom mic in frame or a shot composed around an unfinished monster puppet in a B movie. Like someone is trying their damnedest to make something great with what they can scrape together in their garage.

We demand a certain level of polish in games, and for good reason. You can enjoy a bad movie for all the ways it doesn’t quite come together, but having to actively play through a game with glaring flaws is usually torturous. Still, there’s something odd about holding all games to the standards set by the medium’s blockbusters. We shouldn’t be surprised when some game developer we’ve never heard of puts out a game that’s messier than we’re used to. Games as flawed as Death’s Gambit can be aggravating, and when you’re deciding what to spend your hard-earned money on, there’s good reason to pass them over for one without so many cracks in its foundation. But that doesn’t mean that there’s no place for games like this. Death’s Gambit is a mess, but I’d rather struggle through its half-formed philosophy and rough hit detection than play another glossy but ultimately empty blockbuster.

Death's Gambit is buggy, unpolished, frustrating, and derivative. At the same time, it features some interesting bosses and unexpected storytelling tricks. It's sure to be a divisive game, but you may be won over by the atmosphere its fantastic art, music, and voice acting create, if you can overlook its flaws.

A committed indoor kid, Bryan moved from Pittsburgh to Los Angeles for a prettier landscape to ignore. They can be lured outside with promises of taco trucks and film festivals, and enjoy trawling through used book stores for works on the occult. Bryan has been gaming since the SNES era and is a sucker for good pixel art.
Related Articles: Death's Gambit
Share
Tweet
Share
Submit