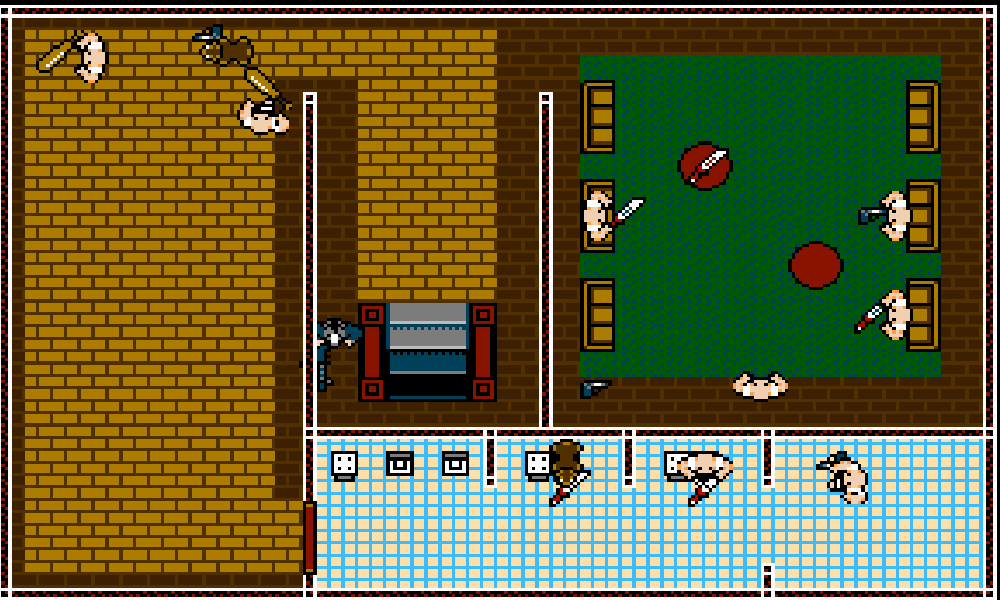 I’ve made it no surprise that I adore Devolver Digital’s annual press conferences. Oddly enough, games are put on the backburner, with the shining performance of Nina Struthers making for an interesting and unique concept. However, this year, the company did do something out of the ordinary and stealth dropped a collection of their famous titles, but in bootleg form. Devolver Bootleg, a collection of eight de-mastered titles, is a shallow but lovable homage to the company’s recent lineup of indie games. 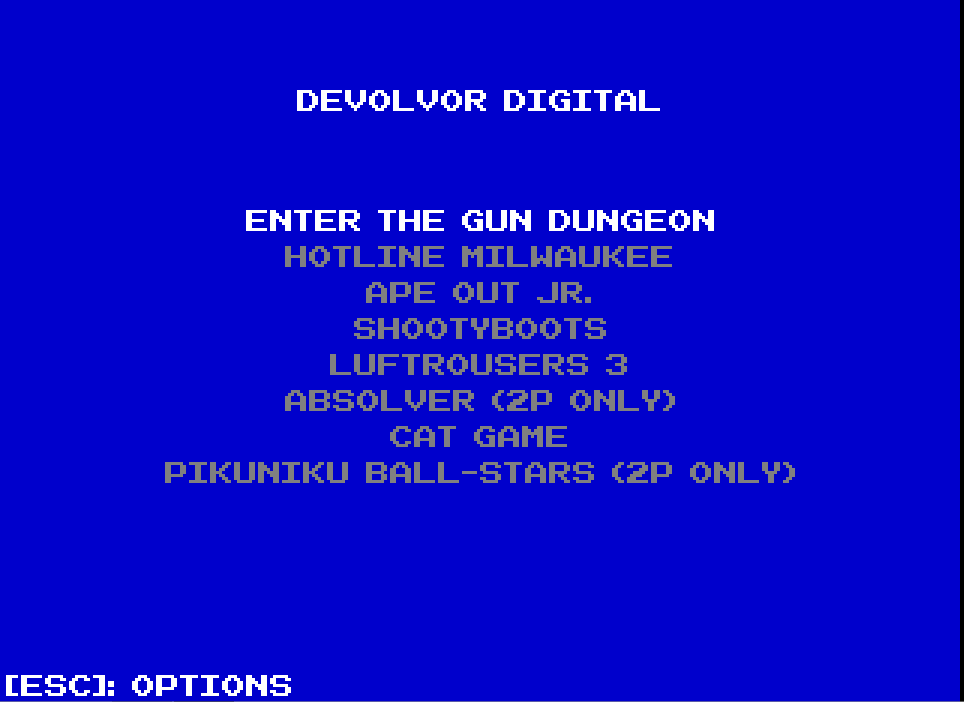 The name of the game in Devolver Bootleg is stylistic suck, and the collection even opens up to an MS-DOS mockup screen. Nothing too crazy, just a basic launcher of eight bite-sized adaptations of games from the Devolver Digital catalog. All of the games use a two button control scheme, which also happens to mimic the 8-bit aesthetic the games are emulating. Each one is a distinct parody but still feels like the original, for better or for worse. The main issue with these games is that sometimes simplifying the control scheme can make for some clunky gameplay, as I’ll note in my brief rundown below. These come complete with outrageous titles that barely skirt the line of copyright infringement (but then again, this is a company ripping off its own games so…) 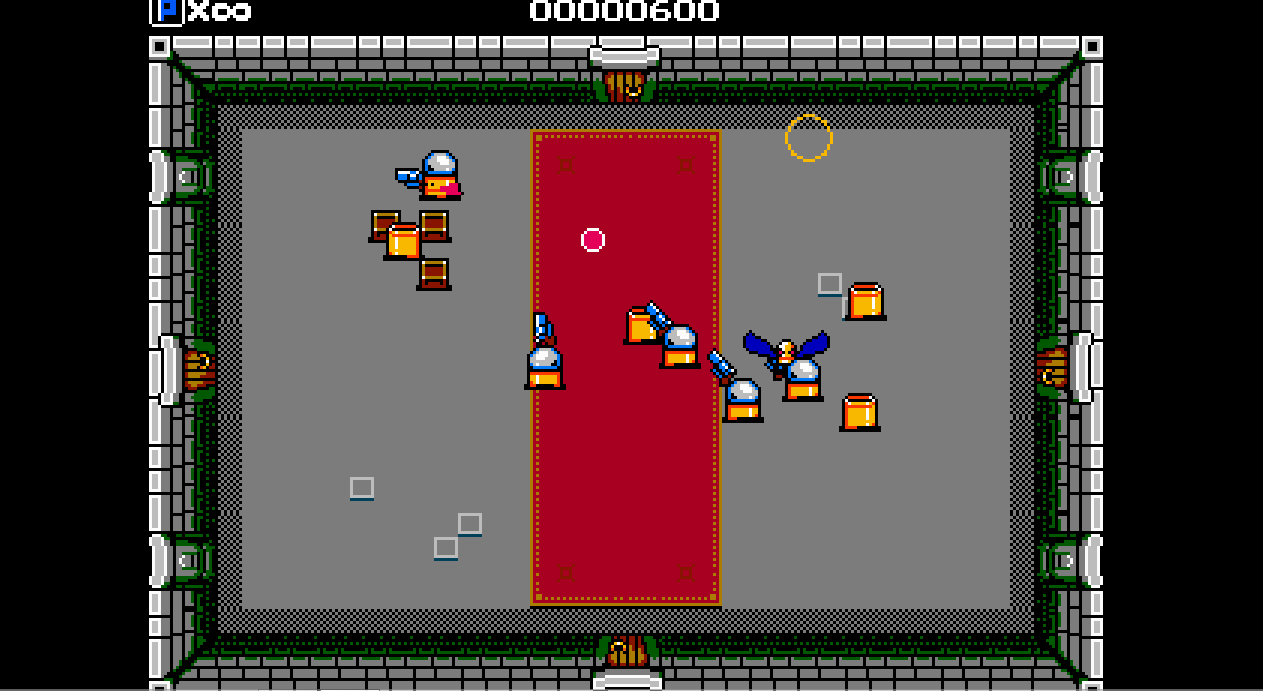 Enter the Gun Dungeon is a parody of Enter the Gungeon (didn’t see that one coming, huh?) which is a parody of the original. The game’s twin-stick shooter gameplay mechanic had to be simplified due to the aforementioned control scheme, which means you can’t change directions while aiming. You can dodge bullets (which here are enemies AND pickups) and grab some special ammo that can deal more damage to enemies. Rather than a traditional dungeon style, this feels like a Legend of Zelda dungeon, complete with four way room exits and enemies that will appear suddenly. Your character is a one-hitpoint wonder, and any attack or contact with an enemy will cause you to die. However, dodging will prevent this from happening, and you also get some sweet additional ammo if you successfully do this. This feels more like an arcade game since it emphasizes score, so it does get a bit repetitive, but the ripoff adaptation is done pretty well here as this captures the spirit of Enter the Gungeon. 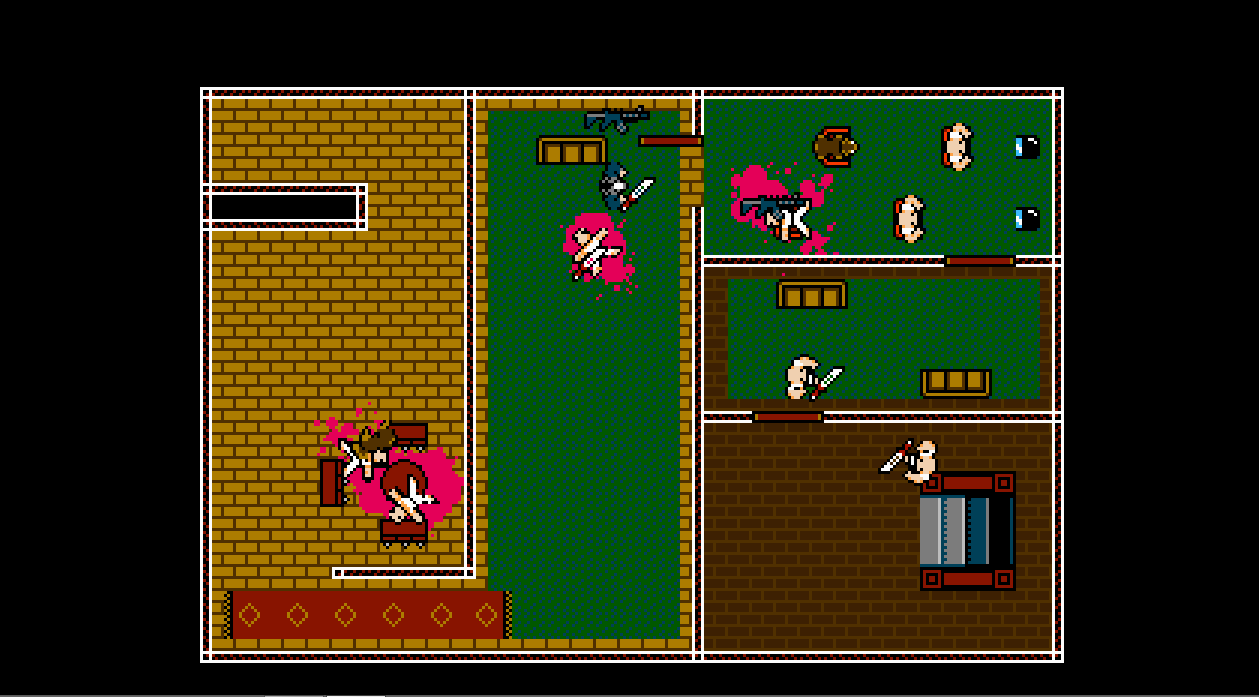 It’s like Paw Patrol if Chase had a gun.

Up next is my personal favorite in the collection, Hotline Milwaukee (a parody of Hotline Miami). After getting a random call from a stranger, you head down into a mysterious basement in order to destroy everything in your way, because… well, it’s a knockoff version, what else do you want? Much like the original, you go through top-down rooms trying to kill everything in your way, from thugs to dogs. You can grab weapons and shoot, bash, throw them against unsuspecting enemies, with score bonuses for bum rushing or sniping them. The layout of each room is important, since you and your enemies will die in one hit, with splatters of blood coming out of everything that dies. Much like Enter the Gun Dungeon, Hotline Milwaukee makes the 8-bit transition pretty well, keeping the same goofy and gory spirit of its source material while also making do with the simplified control scheme and graphics. This one can be done in a little over thirty minutes, but it’s a fun experience nonetheless. 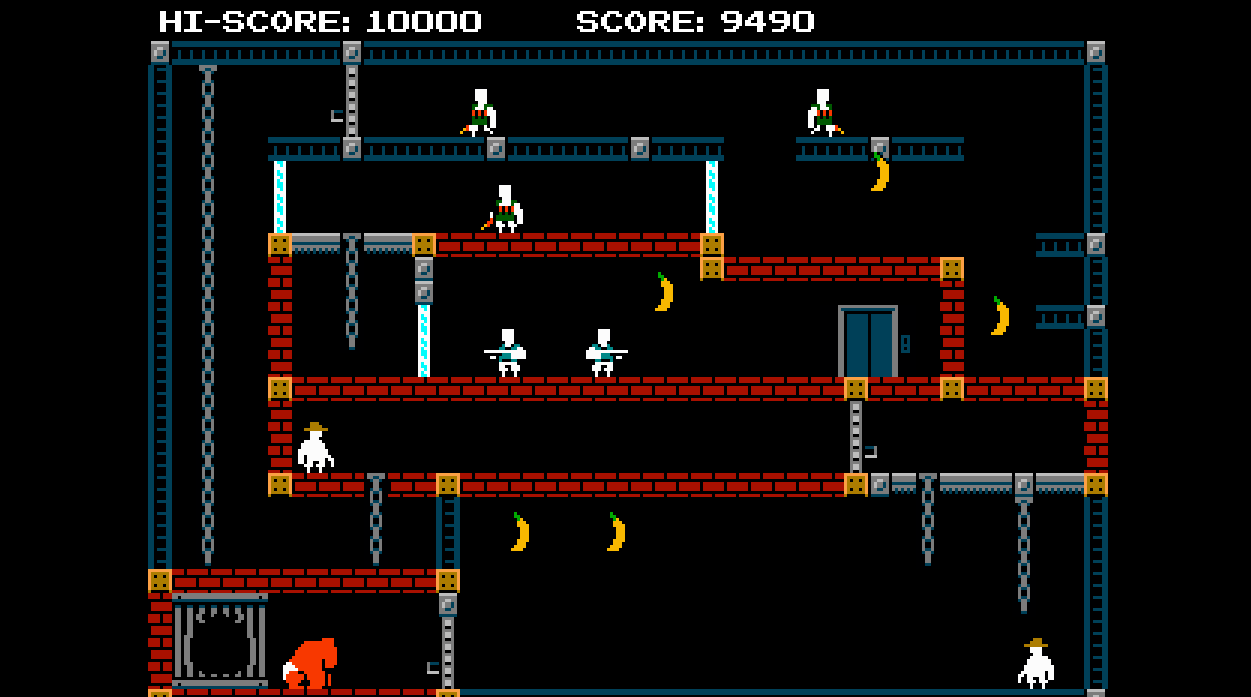 Ape Out Jr. is actually a rather different departure from the original Ape Out in that it’s basically a Donkey Kong… Jr. clone. This is probably the game that diverges from its original title the most but works very well because of it. You control a baby ape as it rampages and destroys the different zoo workers and personnel that are fighting back. You can grab people and throw them to their doom or use them as projectiles to hit others. Your objective is reaching the door to the next level, which is easier said than done. The jazz music from the original Ape Out is emulated in a cool chiptune style here, and it gives the game personality, with jazzy carnage being the norm. Unlike Hotline Milwaukee, it doesn’t really have gore (something that the original Ape Out does), but the 8-bit graphics work in Ape Out Jr.’s favor since the graphical style was similarly sparse and minimalistic. 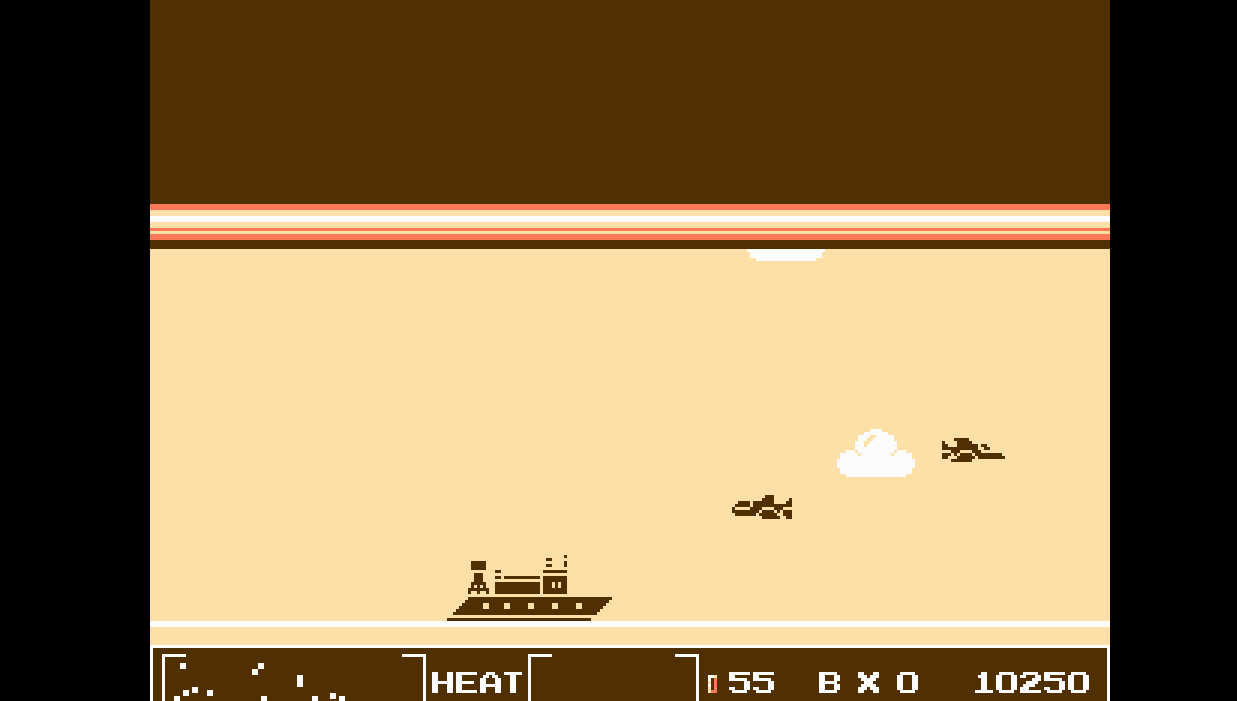 Luftrousers is a shooter in the vein of Luftrausers, where you’ll have to shoot ships and aircraft out of the sky, dodging bullets and collecting coins in order to purchase upgrades. There’s not much I can say since it does emulate the original game rather well, and as a result, it’s a pretty fun time. 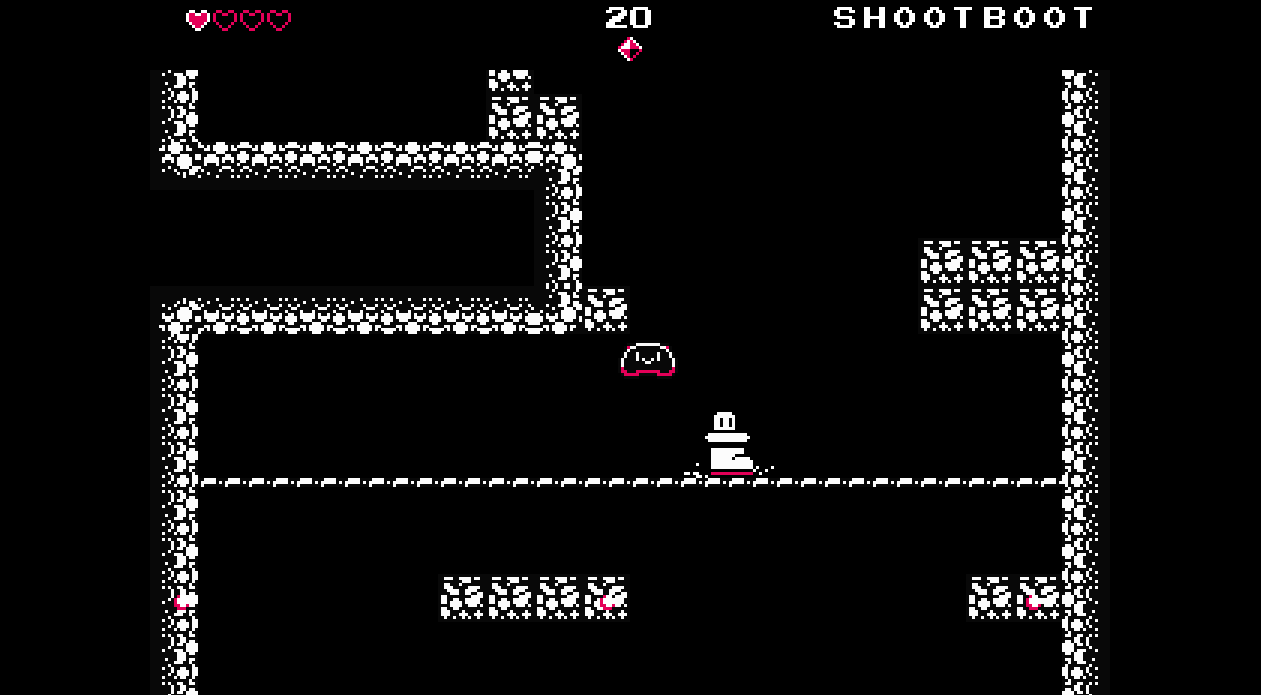 From here, the games are rather mixed in their execution. Shootyboots is a parody of Downwell, and it retains its original style since it was already 8-bit to begin with. The game tasks you with going down a well, though this time it’s automatically scrolling upwards, so if you stay up too much, you will die. While the Downwell protagonist could move wherever, here you’ll have to jump first in order to move (much like the Goomba’s Shoe powerup in Super Mario Bros 3). You can also use your shootyboots to shoot bullets downward, and jumping on baddies or landing will refill your ammo. You’ll want to land on enemies though, since you’ll get gems that can be used to unlock powerups. As much as I wanted to like this game (seeing as how I ate up the original on Switch), the physics here are too floaty and inaccurate to be fun. I kept getting hit just due to the fact that controlling the protagonist was imprecise and lacks the same “oomph” factor that Downwell has. The vertically scrolling well also isn’t conducive to the spirit of the original, which emphasized how you could traverse however fast or slow you wanted to. 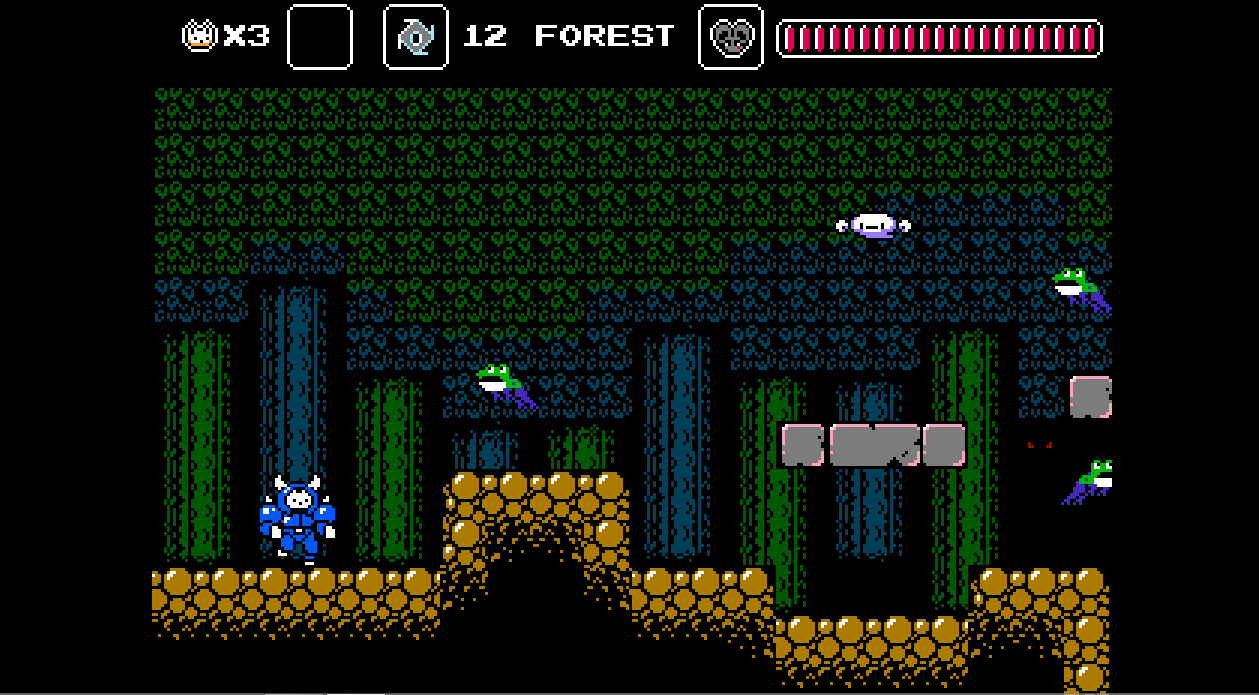 The cat turns into a muscled dude if you get hit once, so uh… Ghosts N’ Goblins anyone?

Catsylvania is my least favorite of the eight games, which is a traditional Metroidvania set in an alternate universe of Gato Roboto. Here, Keekee (not Kiki) dons a suit of armor and heads to a castle to save the pet’s owner. You have a sword attack and limited use shuriken to dispatch against ghostly enemies, but you’ll have to be careful because after one hit you lose your armor; one more hit, and you lose a life. This is my least favorite game just because Keekee moves so clunkily and hit detection is pretty terrible. Sure, you could say that it’s an homage to the first Castlevania, but the last time I checked, the early ones were pretty notorious for unfair difficulty. 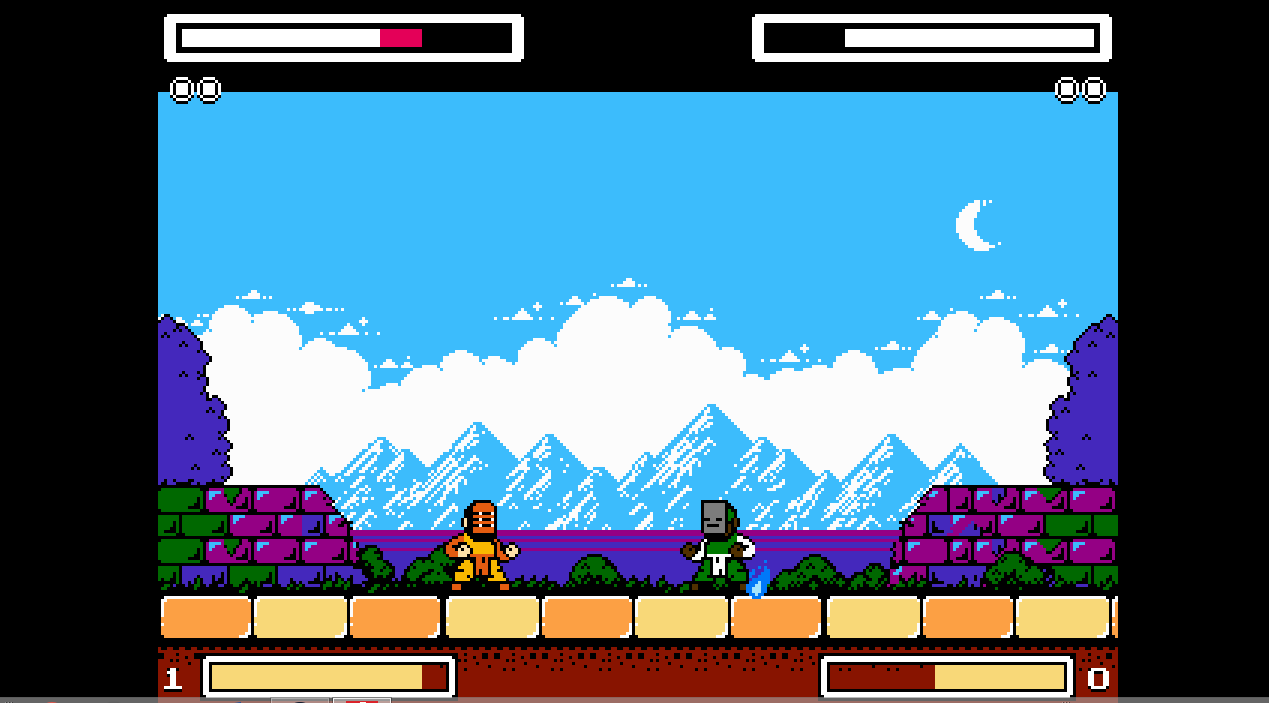 In addition to the six single-player titles, you also have two multiplayer games: Super Absolver Mini: Turbo Fighting Championship and PikuBiku Ball Stars. I do enjoy the former a little more, as it emulates the 1v1 style of Absolver while making it something like a simple Street Fighter 2D fighter. If anything, it’s loads better than Pocket Rumble (which I still feel cheated on, unfortunately). You can pick your own special moves, one of four fighters, and duke it out on a stage. First one to beat their opponent twice wins. PikuBiku Ball Stars is an offshoot of PikuNiku, and involves a cast of eight loveable creatures fighting it out Slime Volleyball style. You can kick the ball into the opposite side in order to score points, and the first to three wins. While I do appreciate the inherent fun value of couch-multiplayer, these games feel very shallow due to lack of customization and even music, making these oddities something you fire up once or twice and finish up without wanting to play again. 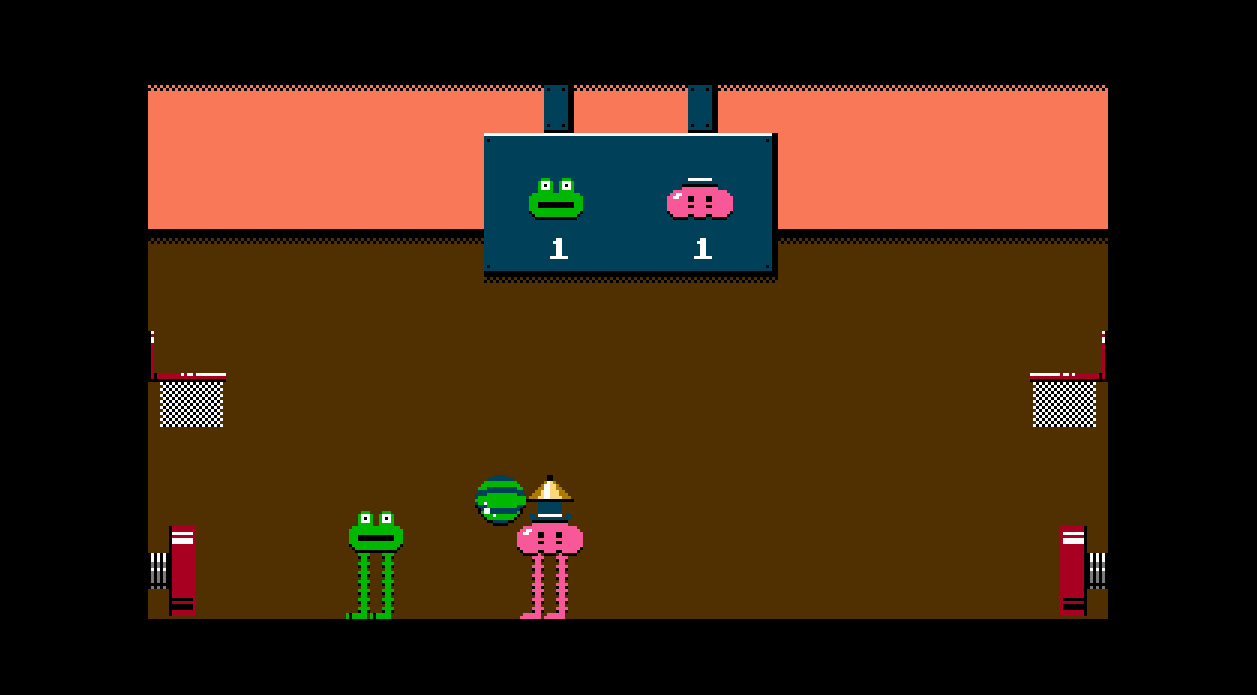 In general, the games do run a tad short, especially the multiplayer ones. This does make sense as an arcade collection, but I feel like they could have gone deeper with the parodies. As it stands, I would recommend this game if you are invested in at least one of the titles Devolver Bootleg parodies, but I would much rather you pick up one of the titles it’s mocking instead.

Devolver Bootleg is an interesting collection of smaller knockoff titles of their official library. While the overall content is a bit on the shallow side, fans of Devolver Digital will get a kick out of this, if only for a short moment.

Elisha Deogracias is an aspiring accountant by day, freelance writer by night. Before writing for Gaming Trend, he had a small gig on the now defunct Examiner. When not being a third wheel with his best friends on dates or yearning for some closure on Pushing Daisies, he's busy catching up on shonen manga and wacky rhythm games. Mains R.O.B. in Smash. Still doesn't know if he's a kid or a squid.
Related Articles: Devolver Bootleg, Indies
Share
Tweet
Share
Submit