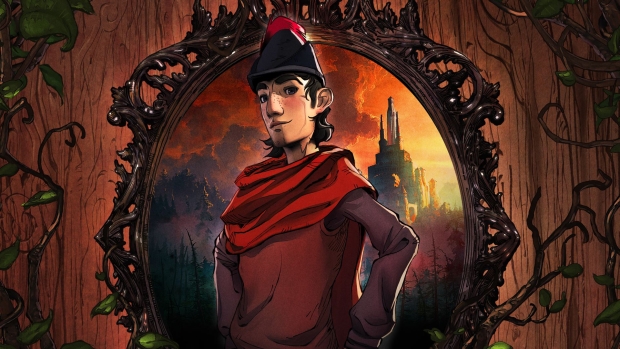 Choices. Action RPGs are always about choices, but King’s Quest’s second chapter carries with it a little more gravity than usual. My review of the first chapter (link here) was spoiler-free but much of what occurs in Chapter 2 hinges directly on the decisions and outcomes of Graham’s previous outings. As a result, there will be some Chapter 1 spoilers here, but I will limit the Chapter 2 spoilers as much as I can. I promise to tread lightly.

Chapter 2 kicks off with Sir Graham sitting on the throne, his ascension to King Graham complete. His days are now filled with approving silly proclamations and regulations needed to rule his kingdom. I can’t imagine a more boring fate for a would-be adventurer. As the proclamations stack up, Graham gets bored with the process and steps out into the town for a breather. The town is all but empty…if it wasn’t for those pesky goblins that just leapt on Graham’s back and put a bag over his head.

DISTREEEESSSSS!!! (you’ll see what I mean when you play the game)

The first chapter was a bit of an origin story for returning and new fans alike. It had a fairly large variety of areas to explore, filled with a fun and unusual cast of characters. This time around the cast is vastly reduced, as is the wandering space. This outing takes place over several days with Graham once again facing decisions that focus on wisdom, strength, or compassion. You’ll gather items as before and deliver them to the same people as before — the Hobblepots handle wisdom, Amaya is your strength character, and unsurprisingly Wente and Bramble will bake up your compassion choice. I was hoping that Odd Gentlemen would shake things up a little bit. If the choices will always be inexorably tied to those three sets of characters, I just imagine that across five chapters it’ll start to feel a little bit like selecting from a menu.

One of the main features I felt was missing from chapter 1 was some sort of skip button. It meant hearing some of the game’s excellent dialogue just one too many times. Well, The Odd Gentlemen heard us, installing exactly what was requested of them. The left bumper skips dialogue or animation at almost any point, whether it’s the first time you’ve seen it or the fifteenth. This smooths the path for replay value — something critical for a game built on a wide variety of choice. The runtime on Rubble Without a Cause is about two and a half hours per decision ‘thread’. Since the game saves automatically, you can’t back up and run a different thread without switching save profiles you’ll have to run the whole chapter over again, but with the skip system in place that’s fairly easy to do.

It’s tough to be a king when you are captured and upside down.

I did run into something a bit odd with my two playthroughs of this chapter. The first chapter was fairly seamless and without much in the way of graphical hitches, but chapter 2 has occasional loading screens, visual artifacting, and the odd herky-jerky animation. It is pretty immersion breaking for a game built on engrossing you in the storyline. My machine is more than capable enough, so this feels like something that could be patched in the future.

Without giving too much away, there are some hard decisions in Rubble Without a Cause that can lead to people dying and being carried out of the goblin jail on a stretcher. Seeing Mr. Fancycakes carried out was heart wrenching for me. It is a pretty big risk to take for Odd Gentlemen, but at the end of the chapter much of that risk is undone. It makes the decisions feel less impactful when you know that nothing done is permanent.

The grandkids are still some of the best parts of the game.

King's Quest: Rubble Without a Cause

It sounds like I’m being fairly hard on Chapter 2 of the King’s Quest reboot, and to some degree I am. The first chapter was a triumphant return for the series, setting the bar fairly high for anything following. While Rubble Without a Cause can be a little obtuse and less intuitive than A Knight to Remember, it is still a worthy installment. Let’s hope that Chapter 3, which is rumored to focus on Graham meeting his future queen Valanice, takes a few more risks when it comes in Q1 2016.

Ron Burke is the Editor in Chief for Gaming Trend. Currently living in Fort Worth, Texas, Ron is an old-school gamer who enjoys CRPGs, action/adventure, platformers, music games, and has recently gotten into tabletop gaming. Ron is also a fourth degree black belt, with a Master's rank in Matsumura Seito Shōrin-ryū, Moo Duk Kwan Tang Soo Do, Universal Tang Soo Do Alliance, and International Tang Soo Do Federation. He also holds ranks in several other styles in his search to be a well-rounded fighter. Ron has been married to Gaming Trend Editor, Laura Burke, for 21 years. They have three dogs - Pazuzu (Irish Terrier), Atë, and Calliope (both Australian Kelpie/Pit Bull mixes).
Related Articles: King's Quest: Rubble Without a Cause
Share
Tweet
Share
Submit