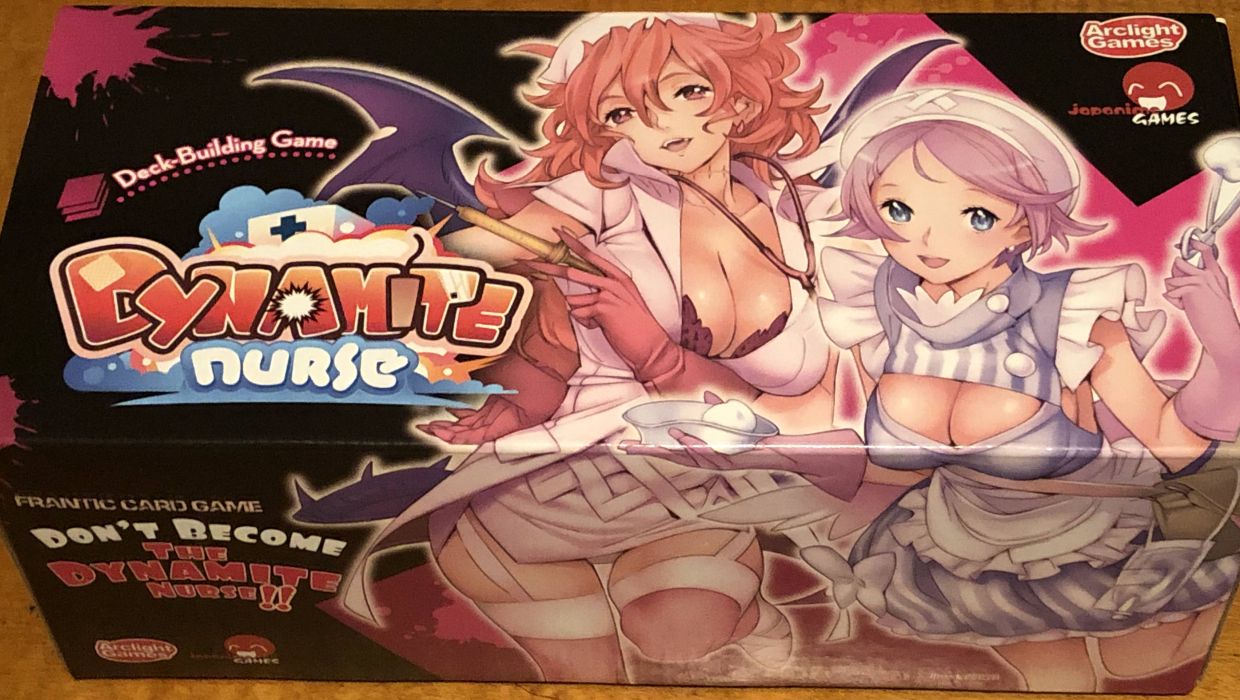 What if I told you that I had a game where everyone played as clerics, and the object of the game was to heal warriors who had just come from battle. That sounds pretty cool, right? What if I said that you had your own temple with only two spots, so you needed to balance who to heal and save? Sounds like some interesting decisions to make, doesn’t it? What if I then pulled out the deck-building game Dynamite Nurse, and the clerics were really nurses and the temple was a hospital? Would you still want to play it? Let’s take a closer look at the game.

Dynamite Nurse starts out like most other deck-builders. Each player starts out with the same starting deck, with other cards laid out for purchasing to build their decks. The common area where cards can be purchased is called the “Town.” Here patient, examination, action, event, and nurse decks are laid out. The cards are colored differently to help group the different cards together, which is especially helpful after playing and matching the different groups of cards. Each player has a “Hospital” area where they place their cards in play and saved patients which gain victory points. The hospital also has two beds for admitted patients that need to be healed.

Each player’s turn consists of four phases. The main phase involves playing cards from your hand. Action cards provide either gold or treatment points while nurses give treatment points. These cards also have text on them that can provide extra gold, treatment points, or ways to affect the patients of other players. Gold can be used to purchase event cards in the town, while treatment points are used to treat one patient. Only patients already admitted in the hospital can be healed, and if a patient is completely healed they will be discharged and contribute positive victory points for the player. The player can then take a nurse from the nurse pile and put it in their discard pile. If a patient is in critical condition, they will need to be healed to get out of critical condition before they can be completely healed and discharged. If the player opts to purchase an event card, they have the option to purchase the second card in the event deck. If the player can’t afford that card, they are out of luck as that counts as their purchase action.

After the healing or purchasing has completed, the transportation phase begins. A card from the patient deck, or Dungeon, and is placed in the ambulance area. The patients toward the front of the ambulance are leading, while the ones closest to the Dungeon are trailing. After the reveal, the current player assigns the newest patient to one of the players by placing a marker on that patient. If there are as many patients in the ambulance as there are players, the non-critical patient closest to the leading position goes critical. If you’ve ever played a deck builder and thought it was multiplayer solitaire, then this should satisfy anyone who wants more interaction among the players. A lot of “take that” can be had during this phase of the game. 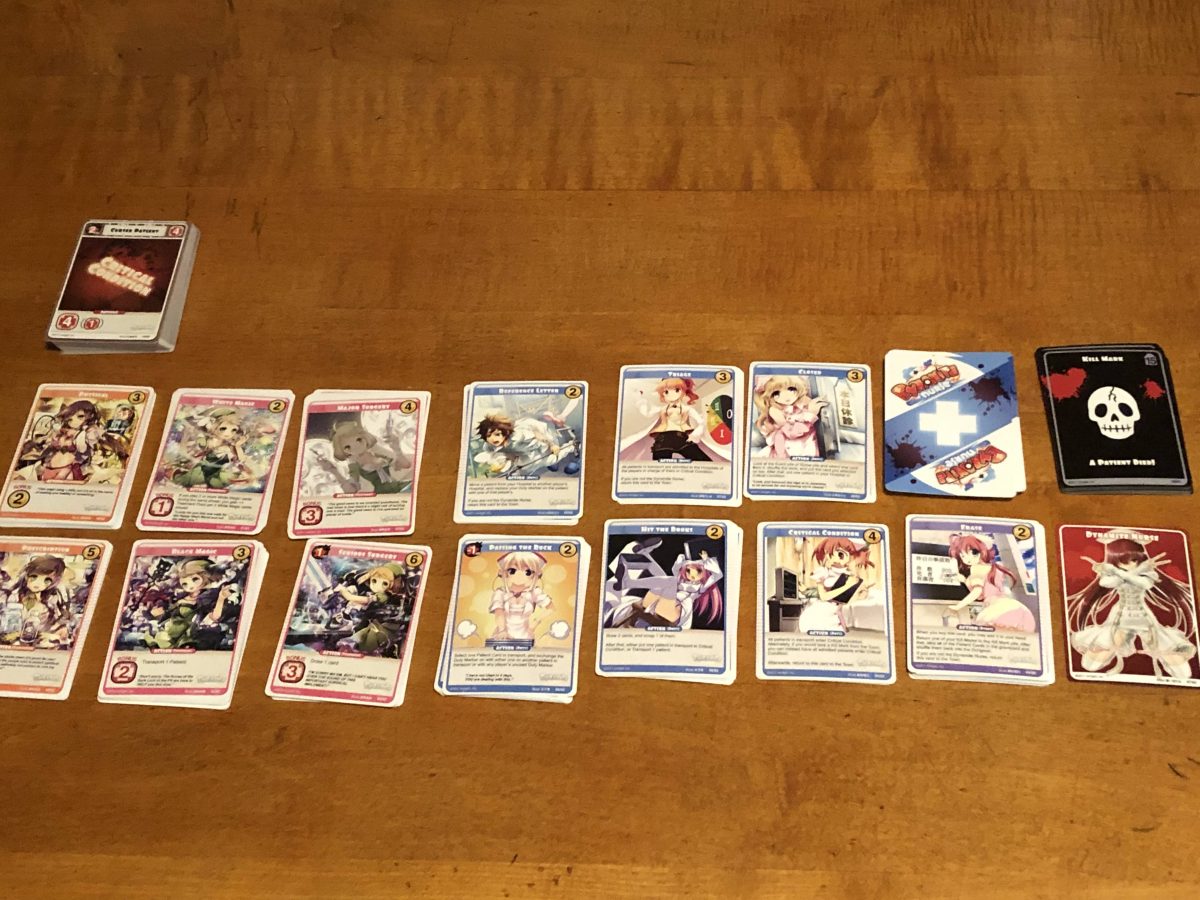 If the player has room in their hospital and patients assigned to them in the ambulance, then they can use the admission phase to place the patient in their hospital However, if the player has more patients than beds, then the number of patients above two go into critical condition. If a patient in critical condition needs to go into critical condition again, that patient dies and the player gains a Kill Mark card. The more of these a player accumulates, the more negative points added at the end of the game. If the player gains a Kill Mark and has more than any other player, they become the Dynamite Nurse and gain her card. The Dynamite Nurse counts as more negative points at the end of the game, but she can also activate some extra abilities on cards.

Finally the player enters the cleanup phase. Here all the cards go into the discard pile, though the player has the option to keep one card still in their hand. Then the player draws four new cards whether they kept a card from the previous hand or not.

While it looks like a lot happens in Dynamite Nurse, the gameplay actually goes by quickly. After a few rounds the phases become natural and can be played quickly.

I mentioned before the amount of “take that” moments that can happen during the transportation phase. Players need to understand that they can be ganged up severely from the patients assigned to them. You might want to avoid Dynamite Nurse with who might object to this style. 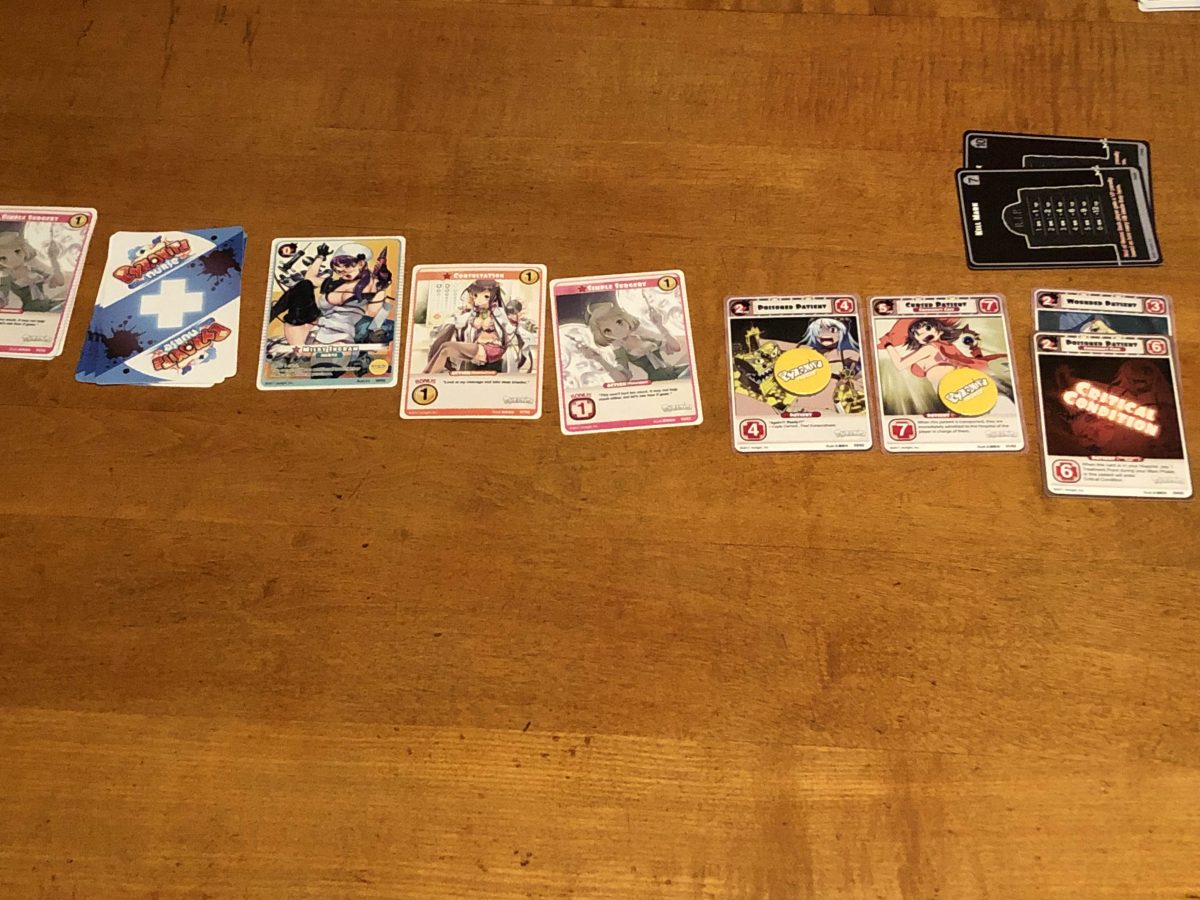 The amount of randomness might turn off some gamers. The patients that come out of the Dungeon are random, as are the cards available in the different areas of the Town. Two examination cards, four treatment cards, and six action cards can be seen at any time. The event pile and nurse piles all come out randomly as well, so it seems like there is some luck of the draw.

Deck building games often play best with two players. However, Dynamite Nurse plays three to five players. I do understand the reasoning behind requiring at least three players, but it’s also limiting. My guess is it’s due to the assignment of the patients, but maybe it could be randomized by flipping a coin or rolling a die.

Finally, it can’t go without mention that the artwork in Dynamite Nurse follows other games in the Japanime Games lineup. It’s not a game that I would play in mixed company, but you could use markers to customize your cards. Maybe kids with a set of crayons could color dresses over the artwork. If Cards Against Humanity can find an audience, then so can Dynamite Nurse.

Dynamite Nurse takes the theme and implements it well. A sense of urgency accompanies each patient, especially when they go into critical condition. The patient assignments add interaction to the game, possibly affecting you each turn. However, the amount of randomness might turn off some players if they take their gaming too seriously. I actually appreciate the amount of randomness because it makes each game feel unique. I do wish that the artwork was less sexualized, because I could see a larger audience willing to try and enjoy Dynamite Nurse. If you are looking for a unique deck builder and have a group you can get to try it, you’ll find a lot of fun here.

While not working as a Database Administrator, Keith Schleicher has been associated with Gaming Trend since 2003. While his love of video games started with the Telestar Alpha (a pong console with four different games), he trule started playing video games when he received the ill-fated TI-99/4A. While the Speech Synthesizer seemed to be the height of gaming, eventually a 286 AT computer running at 8/12 Hz and a CGA monitor would be his outlet for a while. Eventually he’d graduate to 386, 486, Pentium, and Athlon systems, building some of those systems while doing some hardware reviews and attending Comdex. With the release of the Dreamcast that started his conversion to the console world. Since then he has acquired an NES, SNES, PS2, PS3, PSP, GBA-SP, DS, Xbox, Xbox 360, Xbox One S, Gamecube, Wii, Switch, and Oculus Quest 2. While not playing video games he enjoys bowling, reading, playing board games, listening to music, and watching movies and TV. He originally hails from Wisconsin but is now living in Michigan with his wife and sons.
Related Articles: Dynamite Nurse, Tabletop
Share
Tweet
Share
Submit