Good golly gosh, Halcyon Helen has been murdered! The Aetherwave starlet was found dead in the ballroom of the Grand Colonial Hotel just before the unveiling of Rizzo’s Spectrum Brown. Authorities have contacted Captain Hawthorne of the Unreliable, AKA the schmuck who happened to be passing by, to investigate the high profial murder on planet Eridanos.

The Outer Worlds’ final story based DLC is Murder on Eridanos, and as described above players will have to solve the murder of Halcyon Helen, or Ruth Bellamy as her parents called her. Arriving on the newly available planet of Eridanos which is made up of several floating islands that could, at any time, travel into an inhabitable portion of the planet’s atmosphere vaporizing everyone, you receive a new tool to aid in your investigation: the Discrepancy Amplifier. This… gun of sorts points out localized contradictions in the current timeline, such as someone’s life expiring before they should or footprints that shouldn’t be there. As someone who enjoyed The Outer Worlds and adores murder mysteries, I was eager to review this DLC, but it unfortunately falls short of the expectations set by the main game and itself. 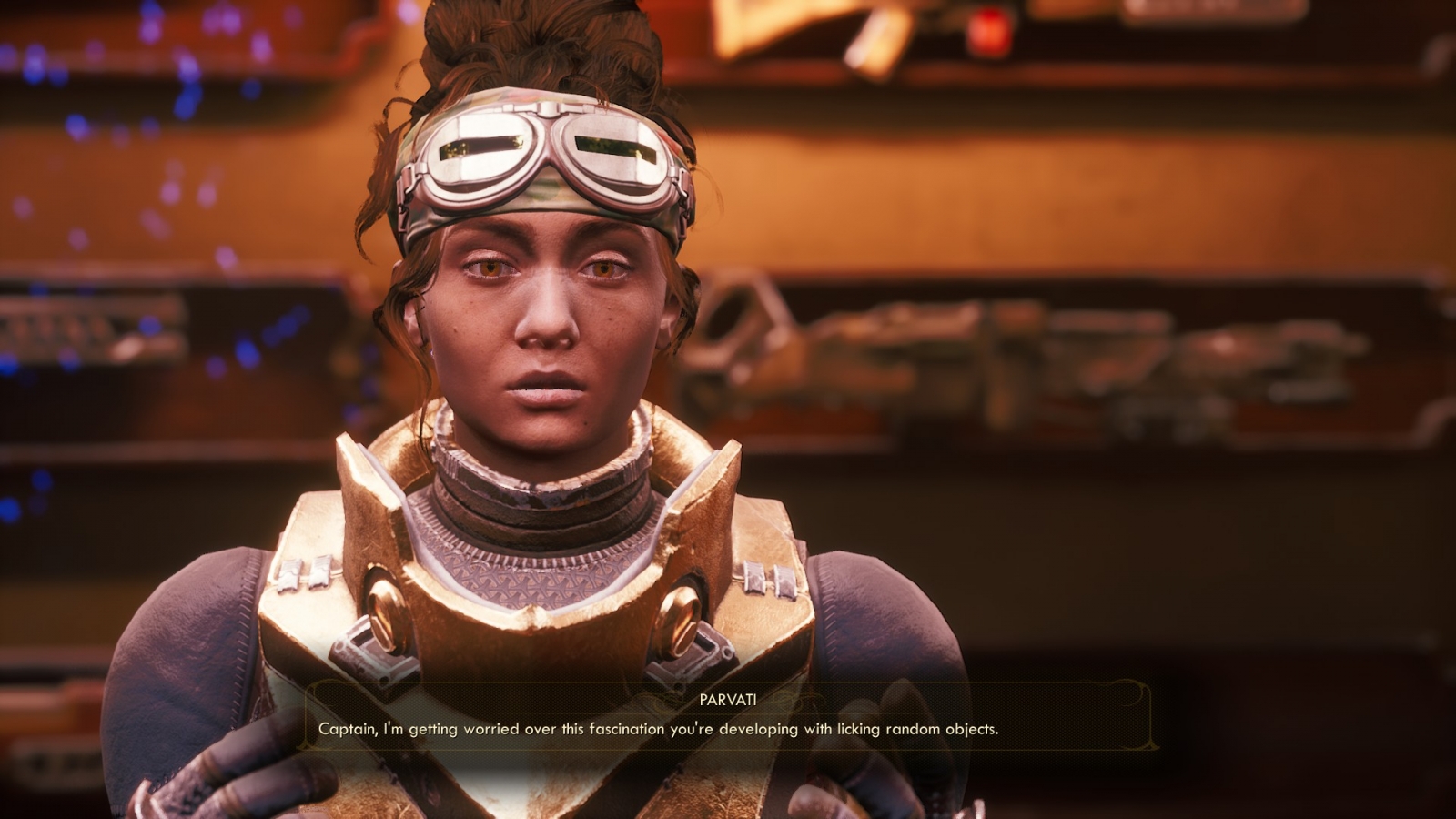 To my personal delight, Murder on Eridanos is mostly focused on the non-combat parts of The Outer Worlds – namely dialogue, hacking, and stealth. In retrospect I felt the previous DLC, Peril on Gorgon, was a bit too combat-focused so this serves as a nice contrast. As you explore Eridanos, you’ll interrogate many suspects and find evidence all over the place, so be thorough and keep that Discrepancy Amplifier at the ready, though it will tell you whenever there’s evidence nearby. While you can let your new and deadpan tool do some of the legwork for you, you’ll still have to put the pieces together yourself and use high level skill checks to root out the truth. It’s a fun gameplay loop for the majority of the DLC, and to be honest I would play an entire game like this with no combat at all.

Sadly the combat is where Murder falls a bit short. It’s not that the combat feels any worse, but that it doesn’t make much sense in context. Peril did a wonderful job at contextualizing why marauders were basically everywhere and added a real sense of tension to exploring the asteroid. On Eridanos, however, why are there mutated people just wandering around near the hotel and other facilities?! I know why they’ve been changed into happy go lucky murder machines, but it feels incredibly weird to see them just standing around near guards who do nothing and hotel guests who pay them no mind. It’s like the game was too afraid of letting you go too long without shooting anything that it needs to shove something in your face to kill. 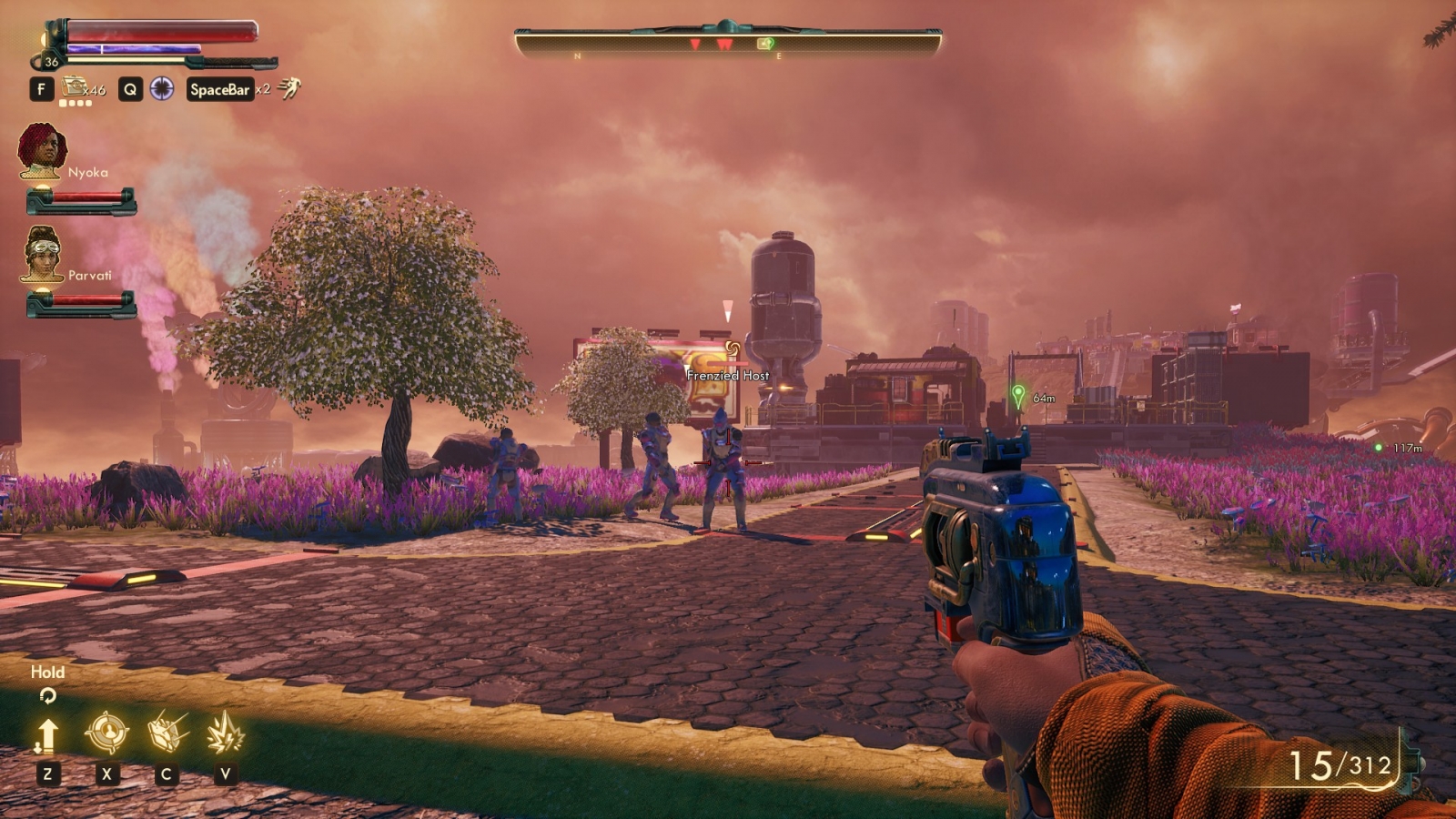 When you do get to explore and speak with guests at your leisure is where this expansion shines. Eridanos is a gorgeous new area (islands in the sky are my jam) with a ton of secrets to find around every corner. Of course in true Halcyon fashion you’ll also find that corporations, SLUG and Rizzo here, abuse their workers and customers at every opportunity. There are some insidious machinations behind the scenes here which may be key to the mystery so I won’t spoil them here, but like the rest of the game it feels like capitalism taken to its logical conclusion and a terrifying mirror of today’s world, particularly some things going on with Amazon.

Once you’ve explored Eridanos, completed side quests and optional dungeons, and found evidence to your satisfaction it’s time to point your finger at the killer. This is where the expansion really takes a nosedive. You see, unlike one of my favorite games last year, Paradise Killer, there is a definitive answer to who the killer is and only two endings. I prefer murder mysteries in games to be open-ended, for you to never be 100% sure you got all the facts right even after you’ve “solved” the case, though I still enjoy those with definitive answers. This expansion’s problem is that your accusation, and in turn your investigation, don’t matter in the slightest. Whoever you accuse, you’ll be shoved one of two paths, told who the murderer is and why, and choose to be cartoonishly evil or vaguely good. This finale also shoves the new investigation mechanics completely out the window in favor of combat focused dungeon crawling. It’s a massive letdown that actively dismantles the fun you had before the twist, and makes me not want to replay this particular DLC if I ever choose to play through Outer Worlds once more.

The Outer Worlds: Murder on Eridanos

While Murder on Eridanos has fun moments focusing on investigating and dialogue choices, it is actively undermined by shoving combat in your face and a twist that makes events leading up to that point feel pointless.

David is the kind of person to wear his heart on his sleeve. He can find positives in anything, like this is a person who loved Star Fox Zero to death. You’ll see him playing all kinds of games: AAAs, Indies, game jam games, games of all genres, and writing about them! Here. On this website. When not writing or playing games, you can find David making music, games, or enjoying a good book. David’s favorite games include NieR: Automata, Mother 3, and Gravity Rush.
Related Articles: The Outer Worlds: Murder on Eridanos
Share
Tweet
Share
Submit