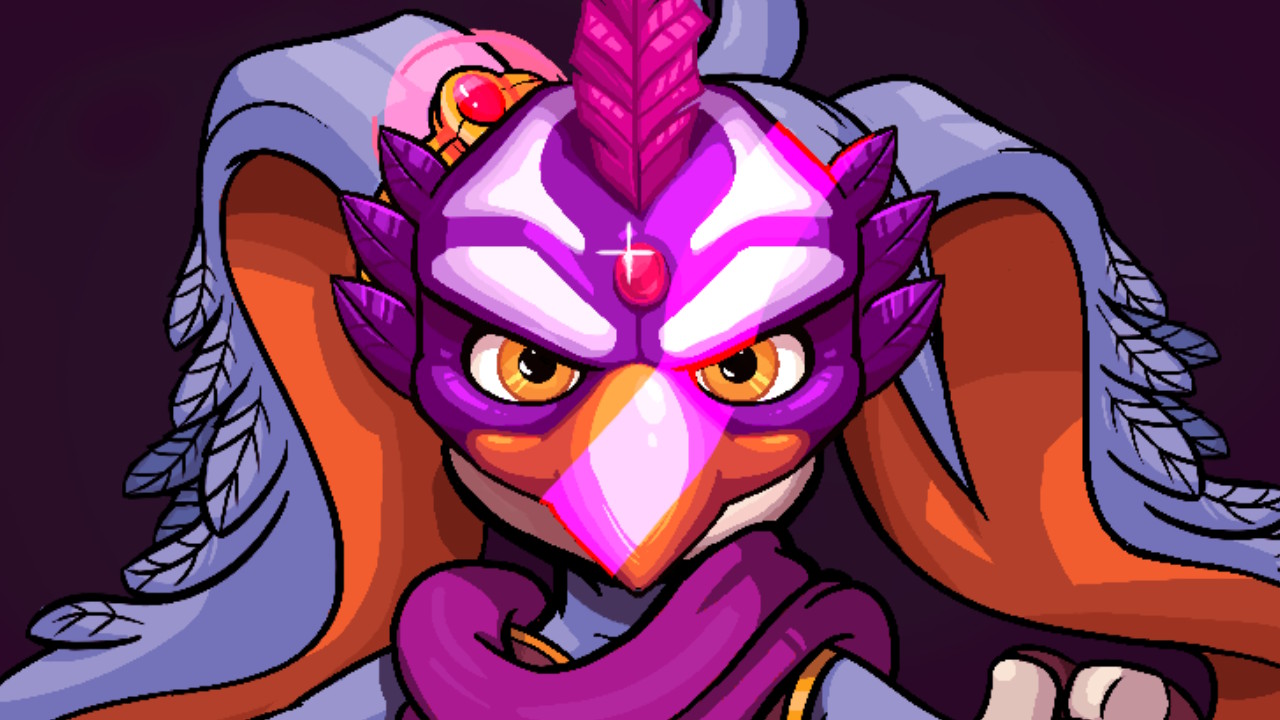 Look, it’s going to be near-impossible to refrain from comparing Kaze and the Wild Masks to the Donkey Kong Country series, so I’m going to right here. That said, the game does a wonderful job adapting the challenging (and sometimes unfair) gameplay of the SNES titles and giving a hard yet fair experience that’s filled to the brim with a childlike whimsy thanks to its simple yet smooth controls, awesome 2D presentation, and a sense of fun I haven’t seen often in recent years. 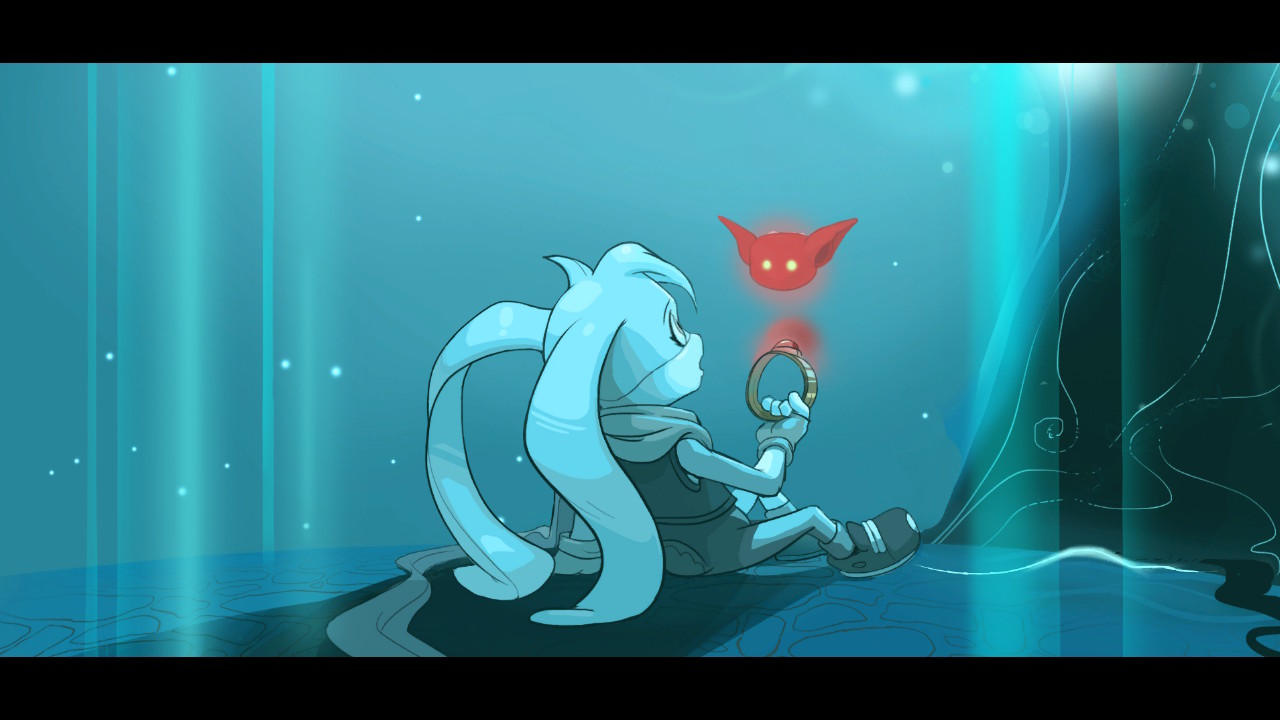 In Kaze and the Wild Masks, you control the titular rabbit-like creature as she finds a way to break the curse that’s trapped her friend in a magic ring-like artifact the two found during their travels. The journey is fraught with perilous vegetables (hostile ones you’d probably find in Atomicrops) and dozens of handcrafted levels that will test your 2D platforming abilities. Your main attacks focus on your ears as Kaze can twirl on the ground or glide in the air. (Kaze’s floppy ears remind me of Klonoa, oddly enough!) You can also do a ground pound move to reveal some hidden secrets and defeat some enemies. Honestly, while the base move pool is slim, there’s still a lot of mileage coming from the game, and it works perfectly with the setting. 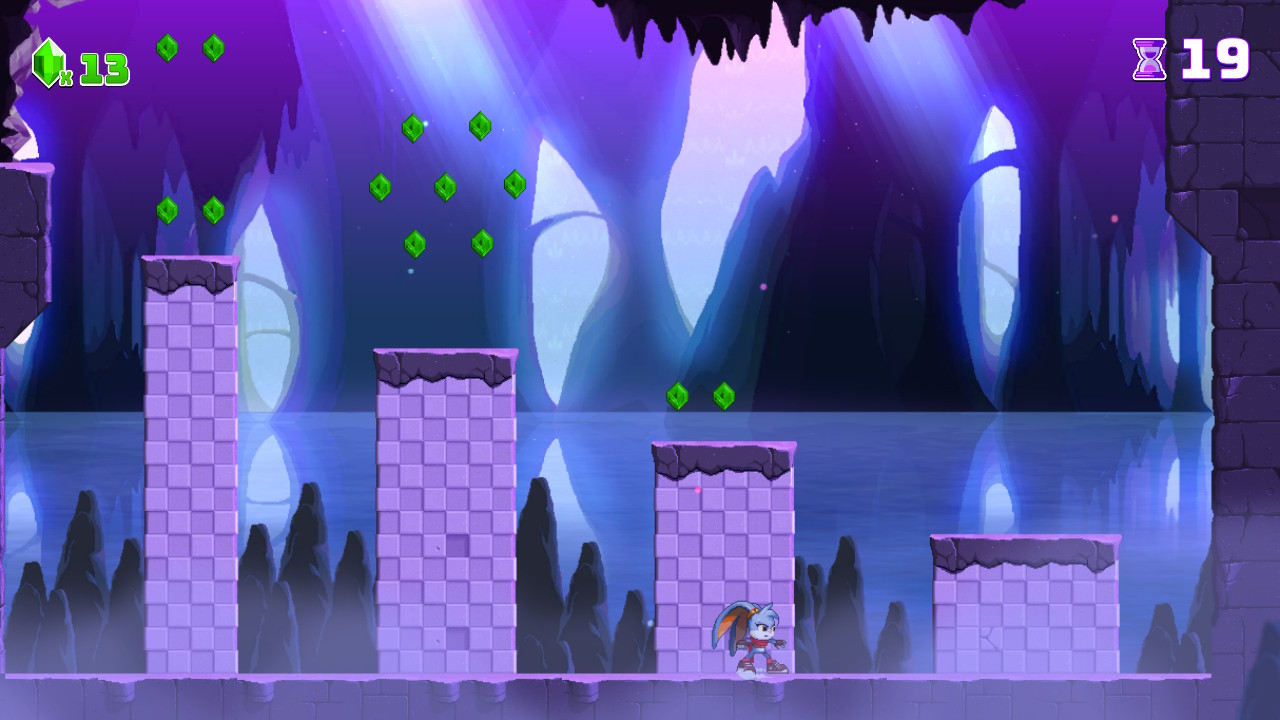 In addition to the main moveset, you also have the titular Wild Masks; four beastly objects which will grant Kaze more powers. From the Eagle (which grants flight and hurls projectiles) to the Shark (which enables you to participate in underwater levels which actually don’t suck!), this mechanic adds a wonderful layer of variety to the near-perfect level design, as each moveset complements its environment well. Really, the only problem I have with the main gameplay mechanics is that the movement speed for regular and Eagle Kaze is sometimes a bit too slow for my liking. After getting to breeze through levels with the Shark and Tiger masks, it seemed that some of the other levels could use a speed boost. Due to me underestimating the speed of the Eagle’s descent or regular Kaze not running too fast, I kept taking a hit or two every so often. 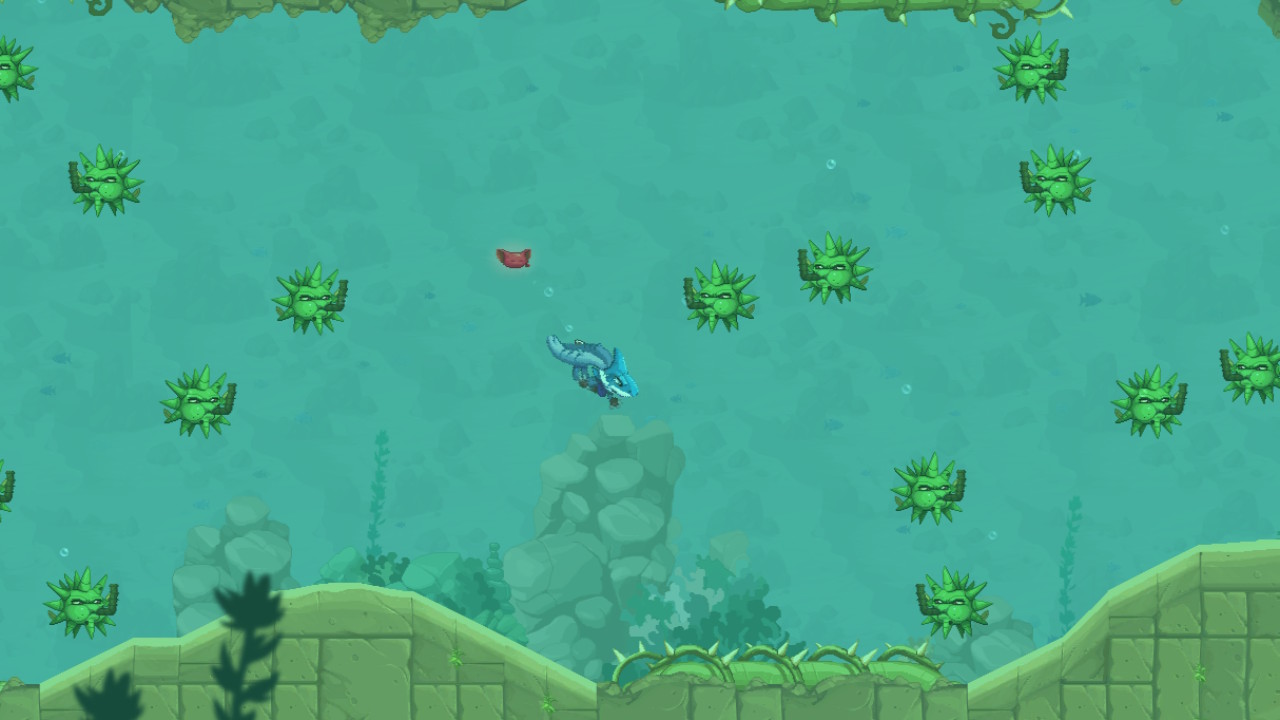 The best thing Kaze and the Wild Masks does right is how it handles difficulty. Sure, there are some levels that feel a bit harder than usual considering the mechanics, but they’re all doable with a bit of a spike around the middle of the game. Unlike Donkey Kong Country, you have unlimited lives with checkpoints littered around (more if you choose the easier difficulty). Kaze’s transformed friend Hogo also offers an extra hit point should you find a heart gem within a stage, but collecting another heart gem with him active will give you purple mini-gems.

There are a ton of collectibles present within the game, with three (or four) special gems that you can get based on this. You have a “totally not KONG collectible” gem where you collect four golden letters that spell KAZE, a green gem which you earn by completing the two bonus areas in a level, and a purple gem that you get from collecting 100 aforementioned mini-gems. (You can also get a fourth gem by not taking any damage or dying in a level). 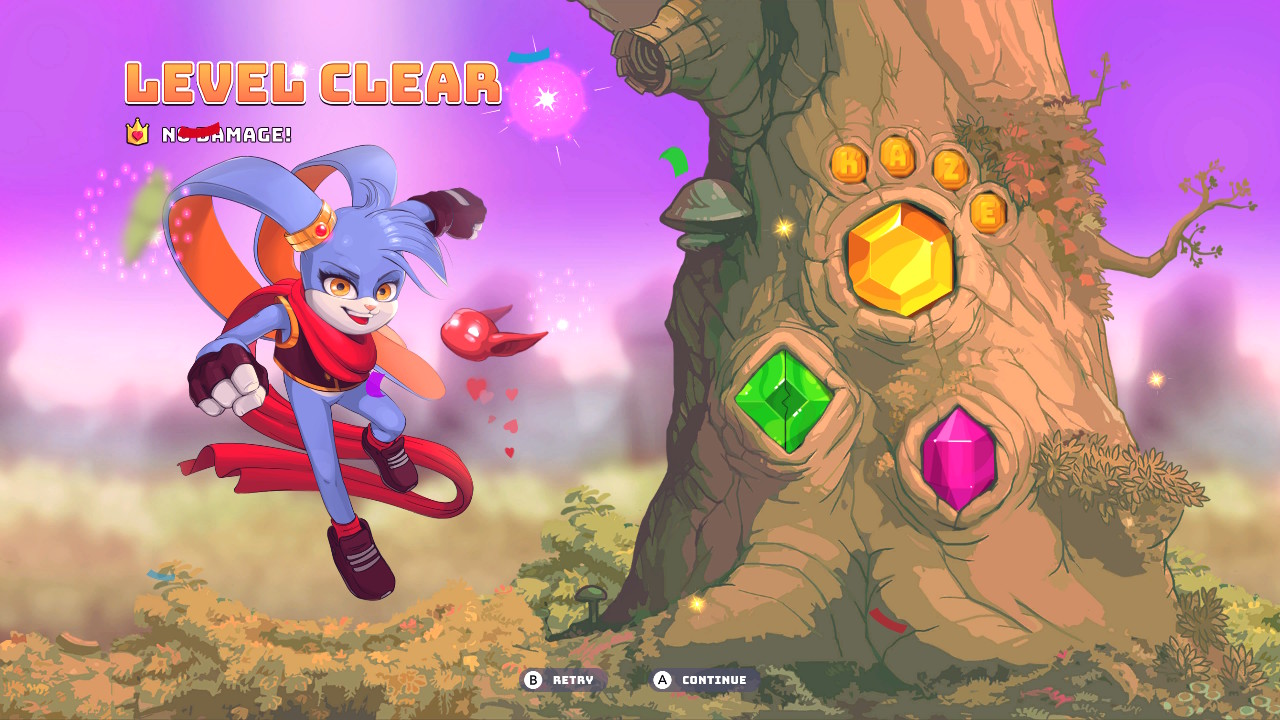 The latter two gems are a huge departure from the rather unfair method of Donkey Kong Country, as these bonus areas are self-contained challenges that don’t disappear if you happen to make a mistake. Sure, some of them can use pixel-perfect jumps, but unlimited retries rather than booting me out of a challenge until I restart a whole level? I’ll take it. The mini-gem… gem also doesn’t require you to grab every purple collectible, since there’s more than 100 in each level. These small but accommodating quality of life features make this a less frustrating experience overall, even with some of the harder levels in the game. 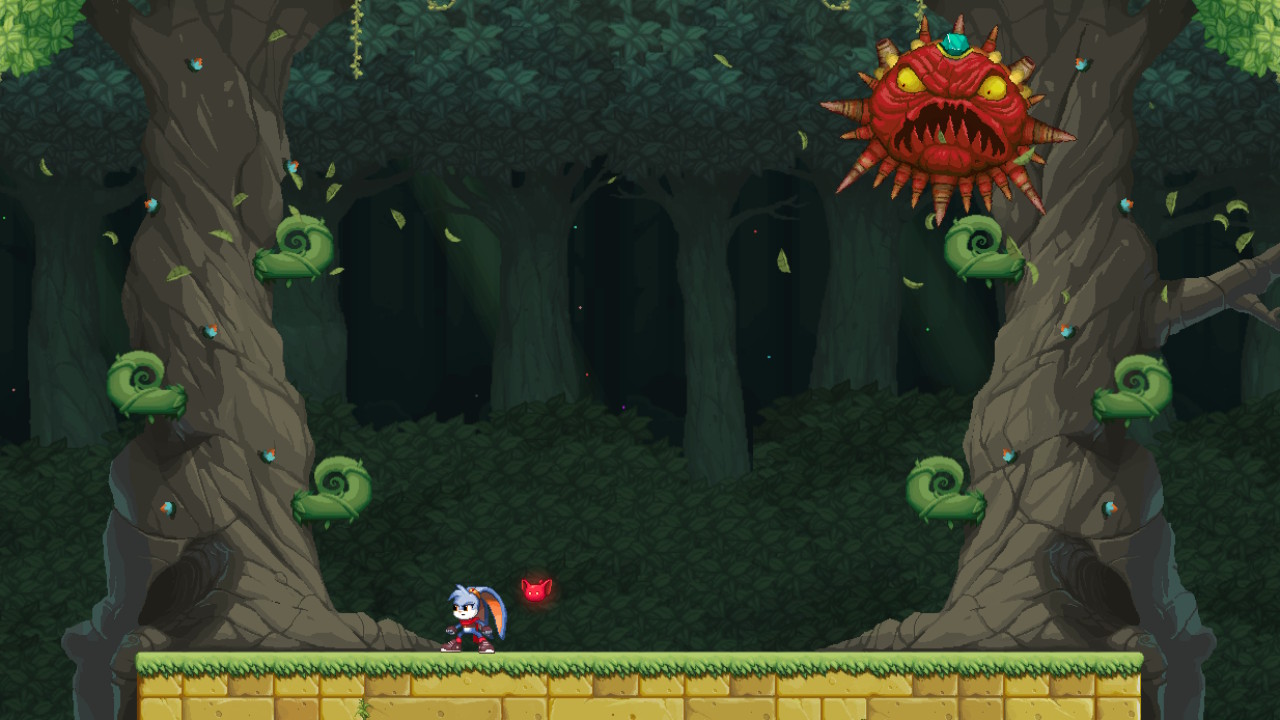 The presentation of Kaze and the Wild Masks is top-notch too, as the pixel art is a wonderful homage to the SNES era it’s trying to reference. The game has no slowdown, and everything runs smoothly and perfectly; the controls are sharp and other than a few speed-related deaths, I felt like every mistake I made was due to my own skill rather than the game trying to kill me. The music is wonderful as well, with a great mix of instrumentals to complement the overall graphical charm of the game.

Kaze and the Wild Masks

Kaze and the Wild Masks is a near-perfect platformer with a lot of charm and entertaining gameplay. It’s just a rush of amazing platforming action chock-full of collectibles and challenge that will have you grinning ear-to-ear like you did in the 90s.

Elisha Deogracias is an aspiring accountant by day, freelance writer by night. Before writing for Gaming Trend, he had a small gig on the now defunct Examiner. When not being a third wheel with his best friends on dates or yearning for some closure on Pushing Daisies, he's busy catching up on shonen manga and wacky rhythm games. Mains R.O.B. in Smash. Still doesn't know if he's a kid or a squid.
Related Articles: Indies, Kaze and the Wild Masks
Share
Tweet
Share
Submit