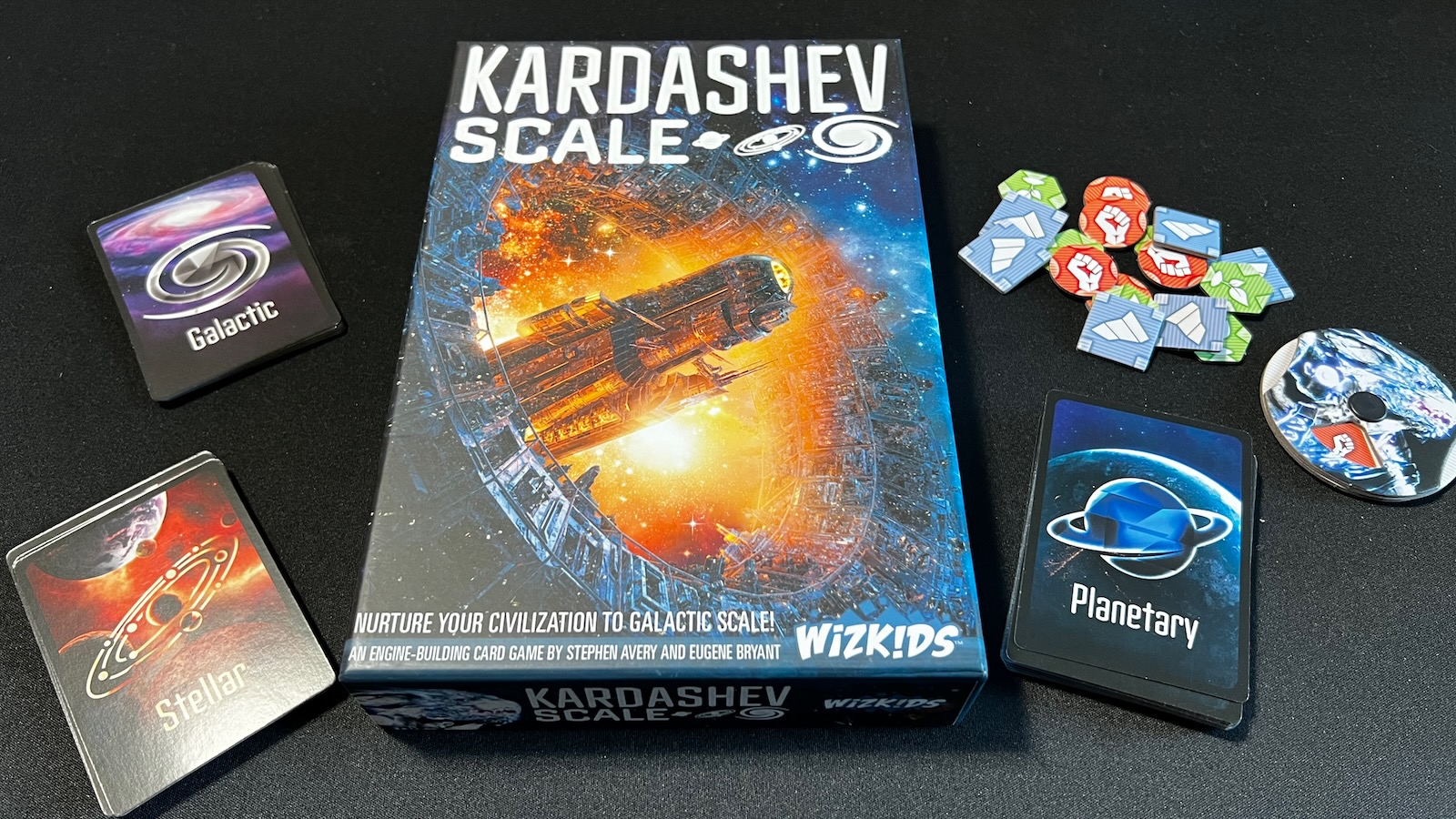 Back in the 1960s, a Russian astronomer, named Nikolai Kardashev, came up with a method of measuring a civilization’s level of technological advancement based on the energy that civilization consumes. Ranking these civilizations into three different types, many different astronomers and astrophysicists have amended and advanced the theory over time. What better theme for a light 30-45 minute card game?

Kardashev Scale, published by WizKids and created by Stephen Avery and Eugen Bryant, has players developing the civilization on their planet by acquiring and spending resources, using the effects of different upgrades, and trying to outsmart the competing civilizations in the game. Every round begins with a summit where a player chooses which resource they want or whether they are ready to buy a card from the supply. Players reveal their choice at the same time and, similar to a game of rock, paper, scissors, certain choices trump other choices. Blue Trade beats Red Conflict which beats Green Research which in turn beats Blue Trade. Players compare their dials to the players on either side of them. A win gains the player two resources of their chosen symbols, a tie gets each player one resource, and a loss gets nothing. Players can also reveal a black rectangle, called the Advance action, indicating they would like to buy from the market to enhance their civilization. 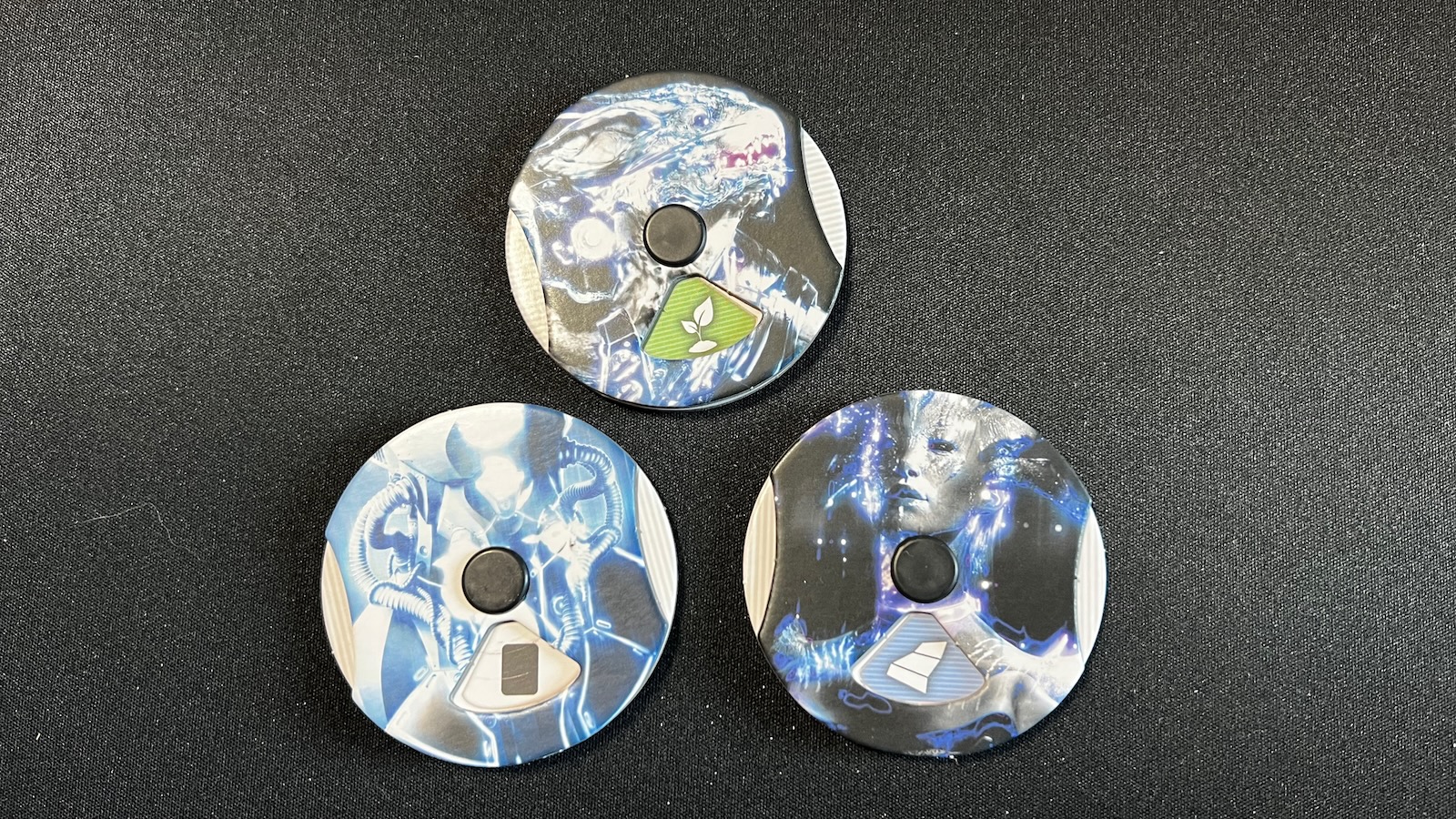 During a summit, players use their dials to secretly choose whether they want a specific resource or to advance their civilization.

The market shows cards representing the three levels of the Kardashev Scale. Type I: Planetary cards represent civilizations that can use and store all the energy available on their planets. Type II: Stellar civilizations can control energy within their solar system and Type III: Galactic civilizations can control and store energy from the entire galaxy. The cards are set up in a pyramid and players must buy cards bottom to top so that each level they go up, a card is supported by two cards from a previous level. For example, a player must own two Type I cards before they can buy a Type II card. Buying cards introduces an engine building component to the game. Each card gives players ongoing bonuses or abilities or end game scoring conditions based on the cards in their civilization at the end of the game. Each card is also worth a certain amount of points that helps a player reach the 25 point endgame threshold. 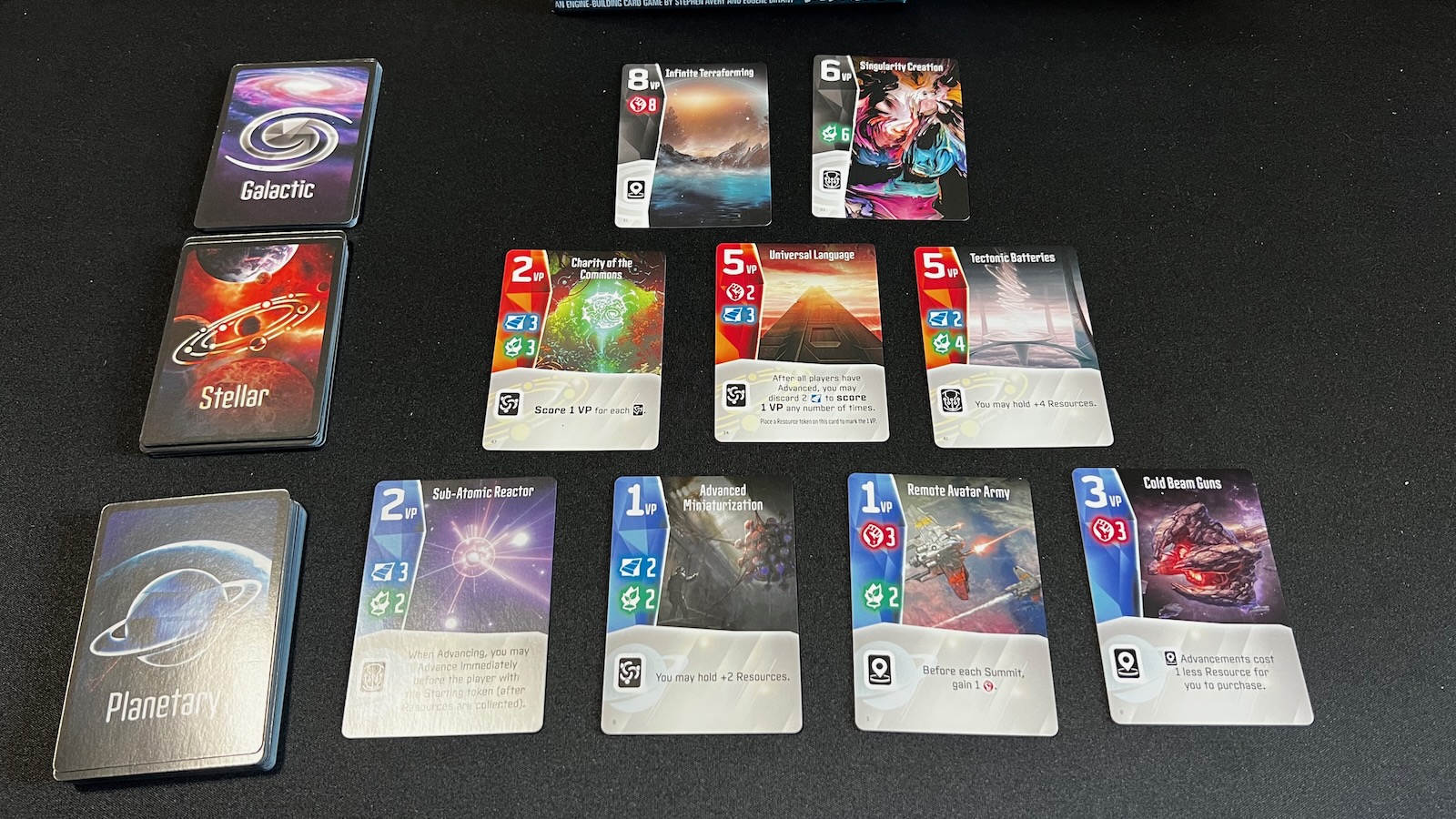 The production quality of the game is nice. The cards each have unique artwork and the symbols and text on each are easy to read. The six player dials included also have unique artwork and a player guide to help with summit phases. The resource tokens are made of quality cardboard and the colors are vibrant and easy to distinguish.

The gameplay is definitely better at higher player counts. The rulebook does include some changes for a two player game, but high player counts allow for more cards to be played from the stock decks. The strategy during the resource summit phase can be fun as you pay attention to what resources are being hoarded and try to guess what a player might choose. Many times during the game, players were racing to get enough resources to buy the same card and strategies had to shift if the card a player wanted got snatched up early. 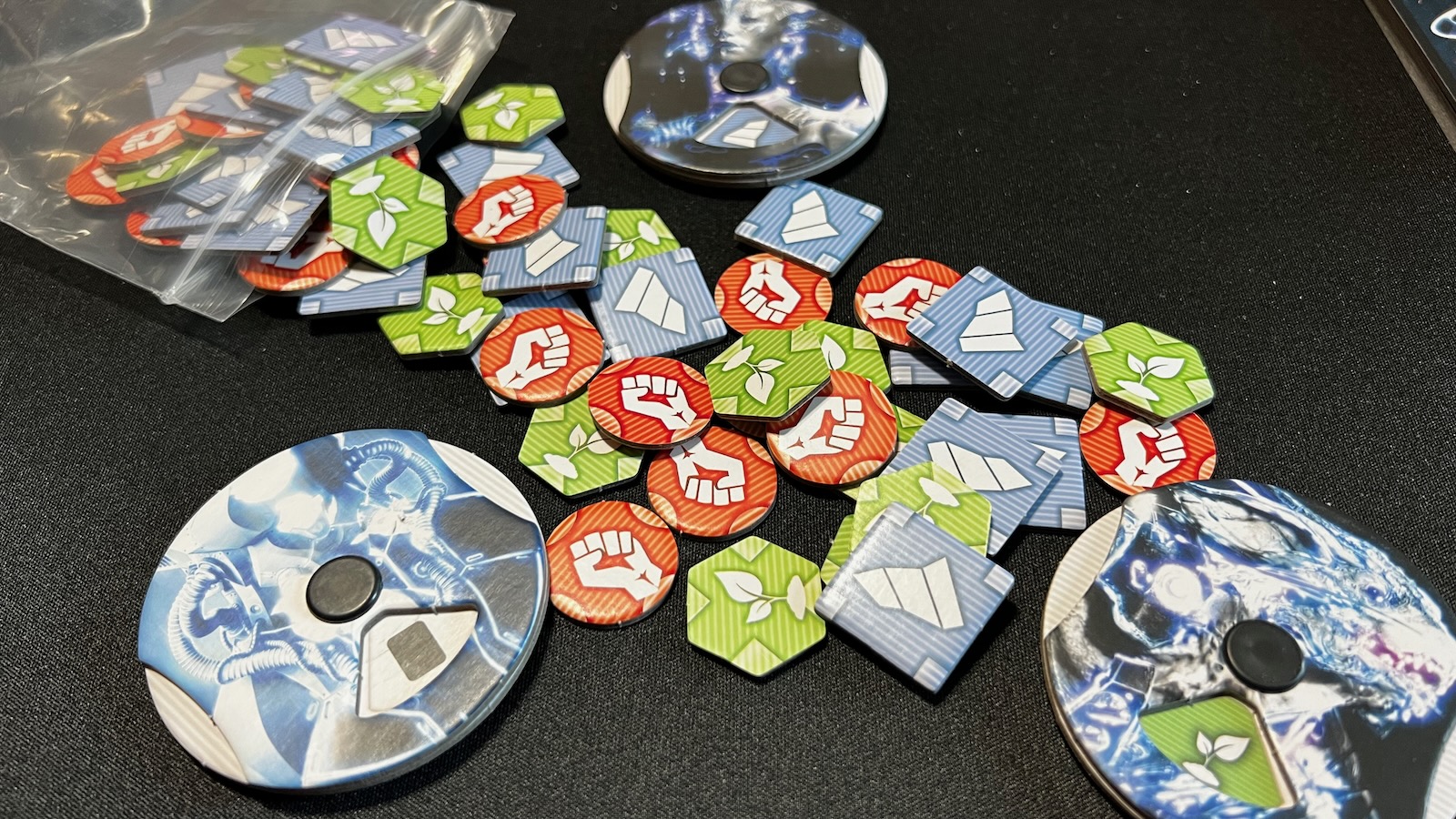 Overall the game would be considered a light starter or filler game in the collection. Some players seemed to get unlucky and had trouble gaining resources which caused some frustrations. Apart from the rock, paper, scissors element, the engine building component is also a little bland. Most players were able to get along just fine without using card abilities and a few times players would just target endgame point cards to help with a victory. While the game is not bad by any means and a familiar mechanic makes the game easy to teach, in a genre filled with exciting and quick card games, this one will probably not be my first pick to start off the evening.

Karedeshev Scale combines classic rock, paper, scissor mechanics with light engine building. A good game if you need something to start your night off or fill times between games. Not enough depth to come back to time and time again.