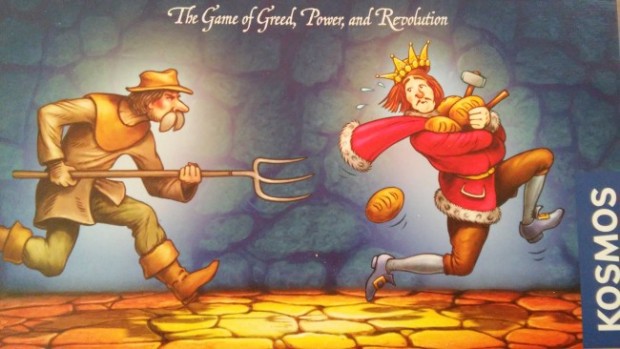 Tumult Royale casts you and some friends as medieval royals. Your goal is to rule over the land, creating statues so that the peasants can bask in your grandeur. However, the work must be done carefully so as to avoid their ire. The game forces you to weigh risks and rewards against each other in a tense contest for balance between the two. Building statues, the game’s functional victory points, require resources that you obtain from the commoners in the form of taxes. The danger is the looming threat of revolt if they are not left with enough resources at the end of every round.

To set up, each player has a castle representing their dominion and supporters, represented respectively by a player board and collection of cards they keep in front of them. The board is made up of randomly drawn kingdom cards, which changes the placement of statues later on in the game. There are several types of terrain at play which make statue construction more or less expensive.

At the start each character obtains a randomly assigned rank, from Duke to King (Or Duchess to Queen as preferences go). After the first round players auction supporters in a bid to get higher rank. Rank has little effect other than turn order, but given the way players have to strategize around resources and placing their statues, being able to control when and where you place can be crucial.

However, the strategy is approachable, for what is clearly meant to be a family game. The cartoonish art style and chaotic play seem designed to make it palatable for less serious players. The game pieces are all well thought out and made of a thick, durable cardboard that should last through many play sessions. I particularly enjoy how the edge of the board is represented by a river that can be expanded or contracted according to player count rather than a typical border. It gives the board a more organic feel and helps to remind us of the setting.

Each round the king uses a spinner to randomly determine how many of the three resources commoners will need at the end of the round to avoid a tumult, the game’s way of punishing greedy players. There are varying types of commodities, each required in different amounts to build statues. Commodities are then played face-down on the board in preparation of the taxation phase.

Every player gets a few limited commodities per turn, but following this is the tax phase, where for 20 seconds all hell breaks loose as players move as fast as they can to turn over tiles one at a time and take as many as they choose. You can interchange freely, and while you can communicate with other players it is probably not in your best interest. Each player’s goal is to take enough commodities to build on their turn, but not so many that they trigger a tumult. Truthfully their goal is not to avoid a tumult as much as it is to not be the greediest player on the board, because only one player will be subject to a tumult should it occur. There can be up to three tumults per round for each commodity type, and the player with the most of that commodity takes a major hit to it as well as their supporters.

This taxation phase is the real meat of the game, and while it gives the game a wild frenetic air and a ton of flavor, it is lacking in the type of strategy to really give players’ choices weight. With the speed of play and multiple players it becomes nigh impossible to keep track of the commodities left on the board, thus turning what is meant to be managed chaos into more of a mess. As a casual family game it can be good fun, but the game can’t function on a more strategic level. After time players get a better handle on the resource management, but they can never escape the randomness that tumults create.

With the remaining resources players place their statues, with varying costs based on terrain. These rules seem complicated at first but quickly become intuitive. The act of placing contains its own area control elements; players must keep track not only of their resources but their future prospects on the board.

I appreciate the variation at play here. The tax phase is energetic and chaotic, but the placement phase requires a more deliberate, calculated state of mind. You get the feel of a leader, pulling resources together during a crisis, having your choices evaluated, and building up once it is done. Apart from some minor bookkeeping these are the only parts of the game, which tops out at 45 minutes. Players go through these phases through 10 rounds, 25 statues are placed by one person, or if the difference between scores of first and last player are larger than a certain margin.

As simple as this game seems, there are some conspicuous clunky elements that hamper the experience. Supporters have only an ancillary effect but many rules are devoted to managing their numbers. There are several balancing factors that do little to harm the experience but stick out in odd ways. There is some confusing terminology in the rules, using the terms taxation and robbery interchangeably. Mostly because of a number of small things that must be kept in mind, the game becomes more cumbersome than it needs to be for something as short and light as is appears.

Tumult Royale is a fun game, but with a little more polish it could be significantly more enjoyable. As something to pull out with the family it eats up 45 minutes inoffensively, and the theme keeps itself up more than many strategy games of similar type. The overall experience has flaws, but none so pronounced to stop you from enjoying a few games.

Tumult Royale mixes chaotic gameplay and careful strategy in a casual experience that fails to be anything more. There is real fun to be had here, and though the elements do not quite come through into a cohesive product it is sure to satisfy many players.

John Farrell is a legal aid attorney specializing in domestic violence, living in West Chester Pennsylvania. You can listen to him travel the weird west as Carrie A. Nation in the Joker's Wild podcast at: https://jokerswildpodcast.weebly.com/
Related Articles: Tabletop, Tumult Royale
Share
Tweet
Share
Submit