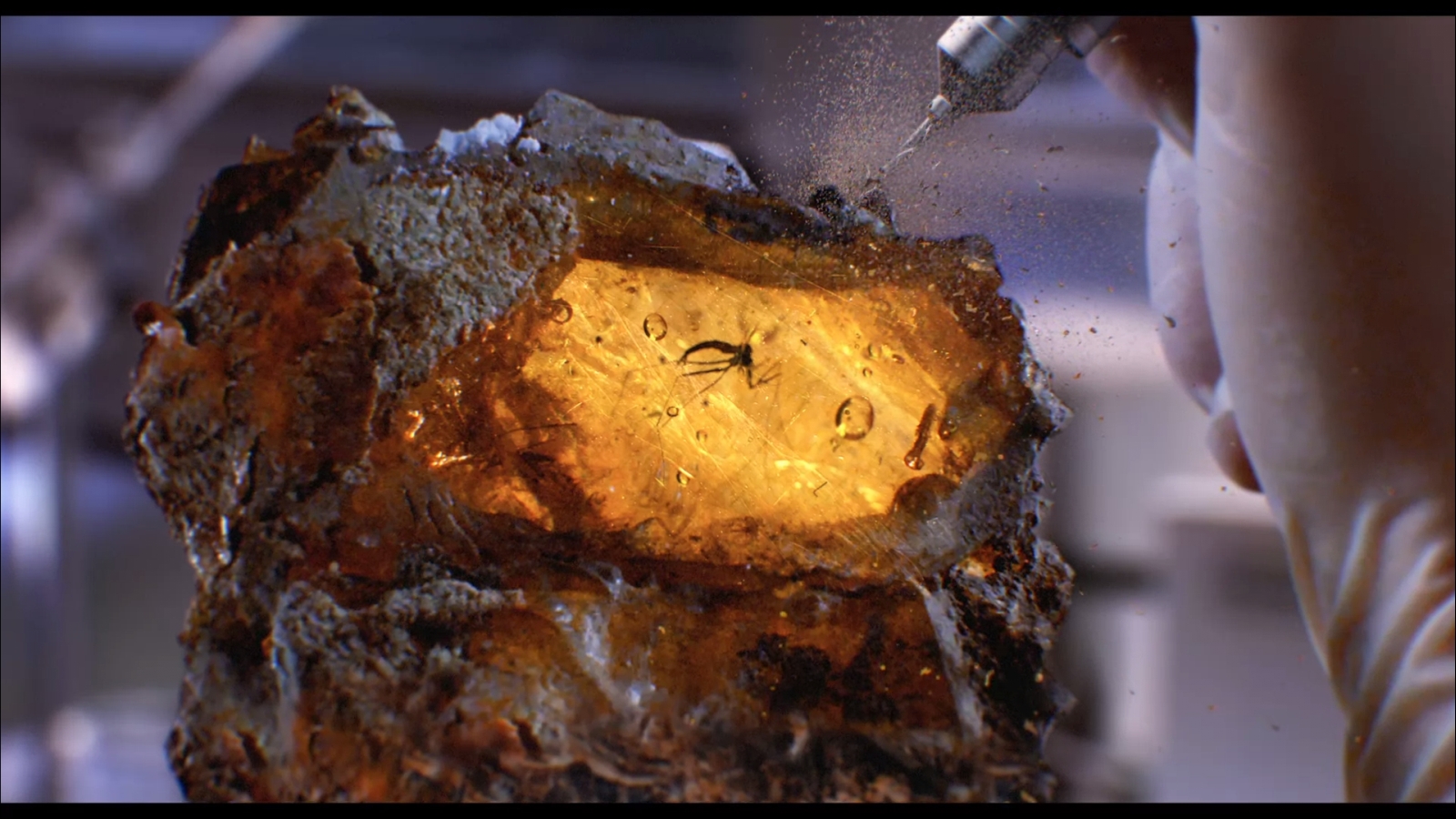 Jurassic World Evolution 2 was probably the one game this year that I have been most excited for and boy it didn’t disappoint. Launching on November 9th, the game follows in the footsteps of its wildly popular predecessor, Jurassic World Evolution, which sucked countless hours of my life away. The sequel has been no different; they are both games that I lose all track of time while playing. My 7 year old son is totally into dinosaurs and sharks now (a moment I have been waiting for anxiously!) so he helped me play through most of the campaign and we had such a fantastic time! You can check out some of the new features in the video below that my Editor in Chief Ron Burke captured.

JWE 2 features an all new Campaign Mode, which takes place just after the events of Jurassic World: Fallen Kingdom. Dinosaurs are no longer contained on the islands, they are out in the world now, and your job in Campaign Mode is to try to figure out how humans and dinos can coexist, while keeping the animals as healthy and as safe as possible. We get to welcome back some of our favorite actors with Jeff Goldblum reprising his role as Dr. Ian Malcom, Bryce Dallas Howard as Claire Dearing, and BD Wong as Dr. Wu. You’ll visit numerous striking locations, including the snowy Canadian wilderness, Pennsylvania in the Fall, and the gorgeous Yosemite National Park, complete with Yosemite Falls. You have much more room to play around with this time around, and you don’t feel as secluded as you did on the Isles of JWE. The scope of things is massive in JWE 2, and the landscapes are breathtaking. 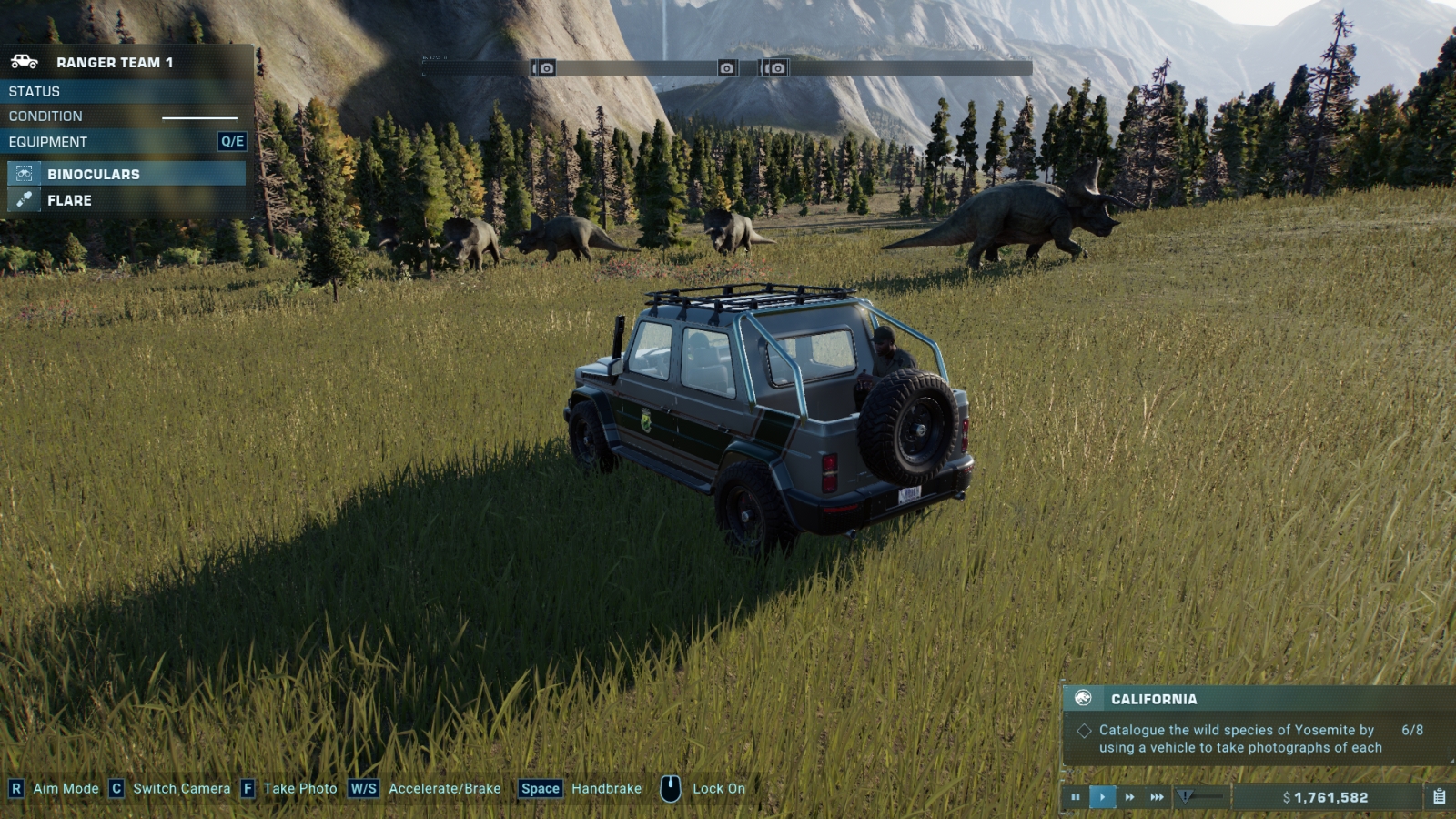 Cruising in Yosemite National Park in the campaign. The scenery is beautiful!

JWE2 also has a new Chaos Theory mode, where you get to play through pivotal moments from all five of the movies in a “what if” type situation. You’ll get to try to fix things that others got wrong from the movies, and have a ton of fun while you’re at it. This mode is more of a snapshot of certain points in each movie where you set up a pre-made design, but I still had loads of fun playing through them.

If you’re looking for something a bit more complex, the Challenge Mode will keep you on your toes, and of course there is the Sandbox Mode where you can play with everything the game has to offer at your own pace. 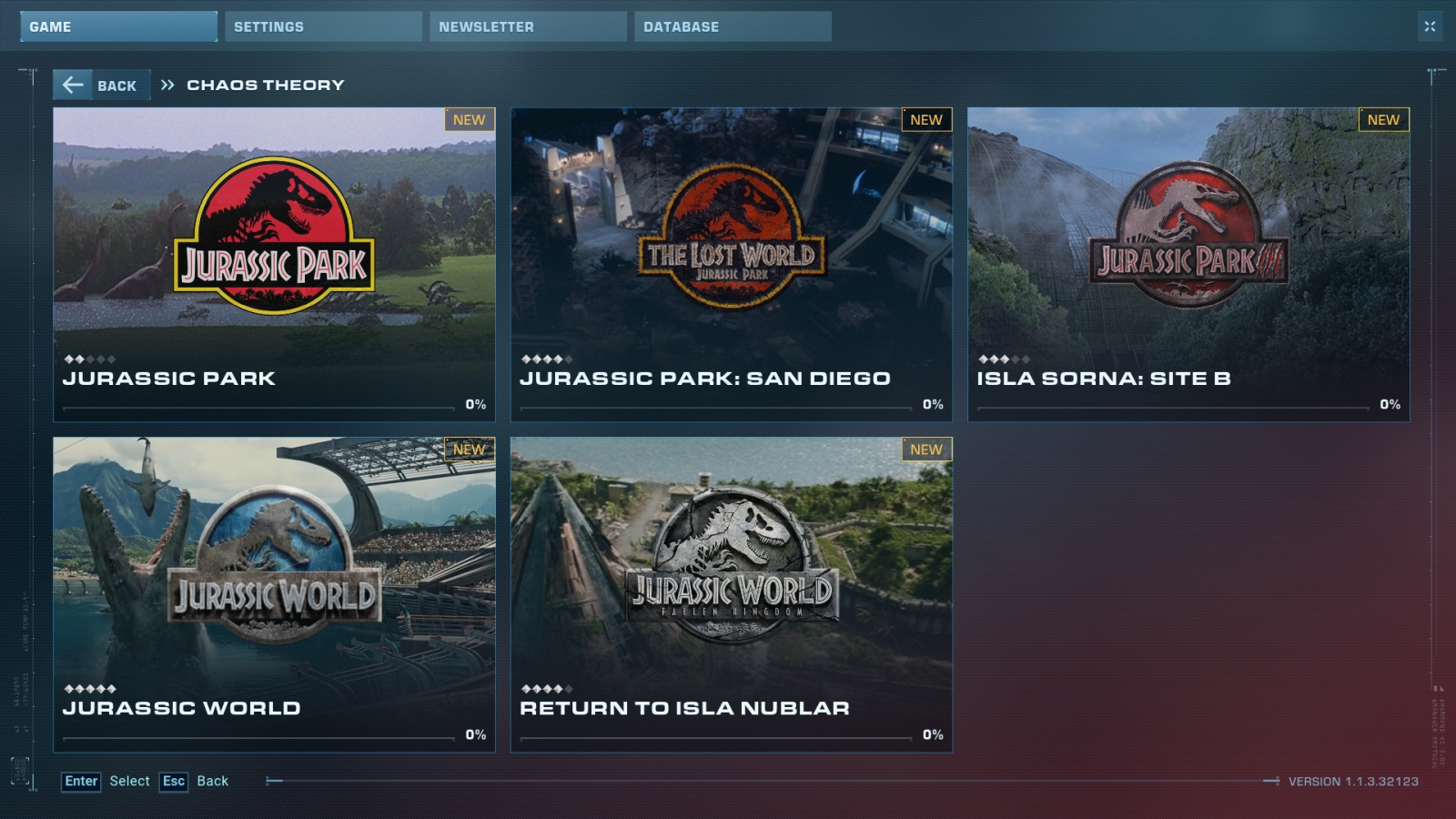 There have been several quality of life improvements with JWE 2, with the biggest probably being the addition of Ranger Posts. In the previous game, you manually went into each dinosaur enclosure and restocked your feeders, but now all you have to do is place a Ranger Post within an enclosure and assign Rangers to it and they will do it all for you! They will scan dinosaurs to check for illness or injury, as well as repair anything that needs fixing, and it’s a huge improvement. Click on your Ranger team, Add Task, and then click on the Ranger Post to get them assigned!

In addition to the posts, something else that is very helpful is you no longer have to put herbivore feeders into enclosures with herbivores. The natural ground cover or forest you add to their enclosures will do the trick, and that is a welcome change! 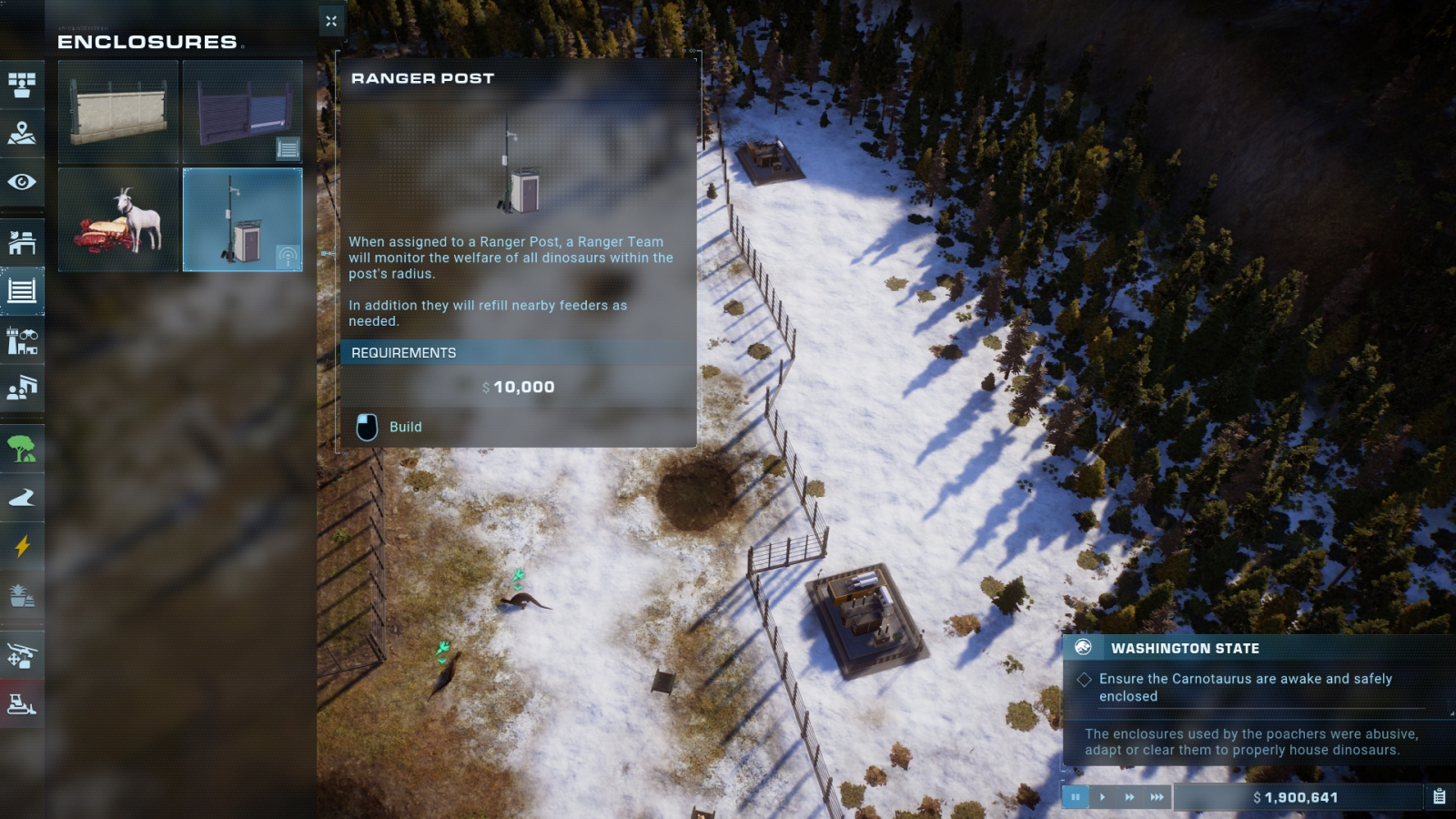 The new Ranger Post can be found under the enclosures tab, and it is SUCH a fantastic addition to the game.

Along with the changes to how you care for and feed your dinosaurs, there is also a new piscivore feeder and two new enclosures to go with the all new flying and aquatic dinosaurs! I cannot tell you how excited I was to see that we were getting Aviary and Lagoon enclosures, along with over 75 brand new dinosaurs. Yes folks, you can now build yourself the same lagoon from Jurassic World and have your very own Mosasaurus, and it’s absolutely majestic. 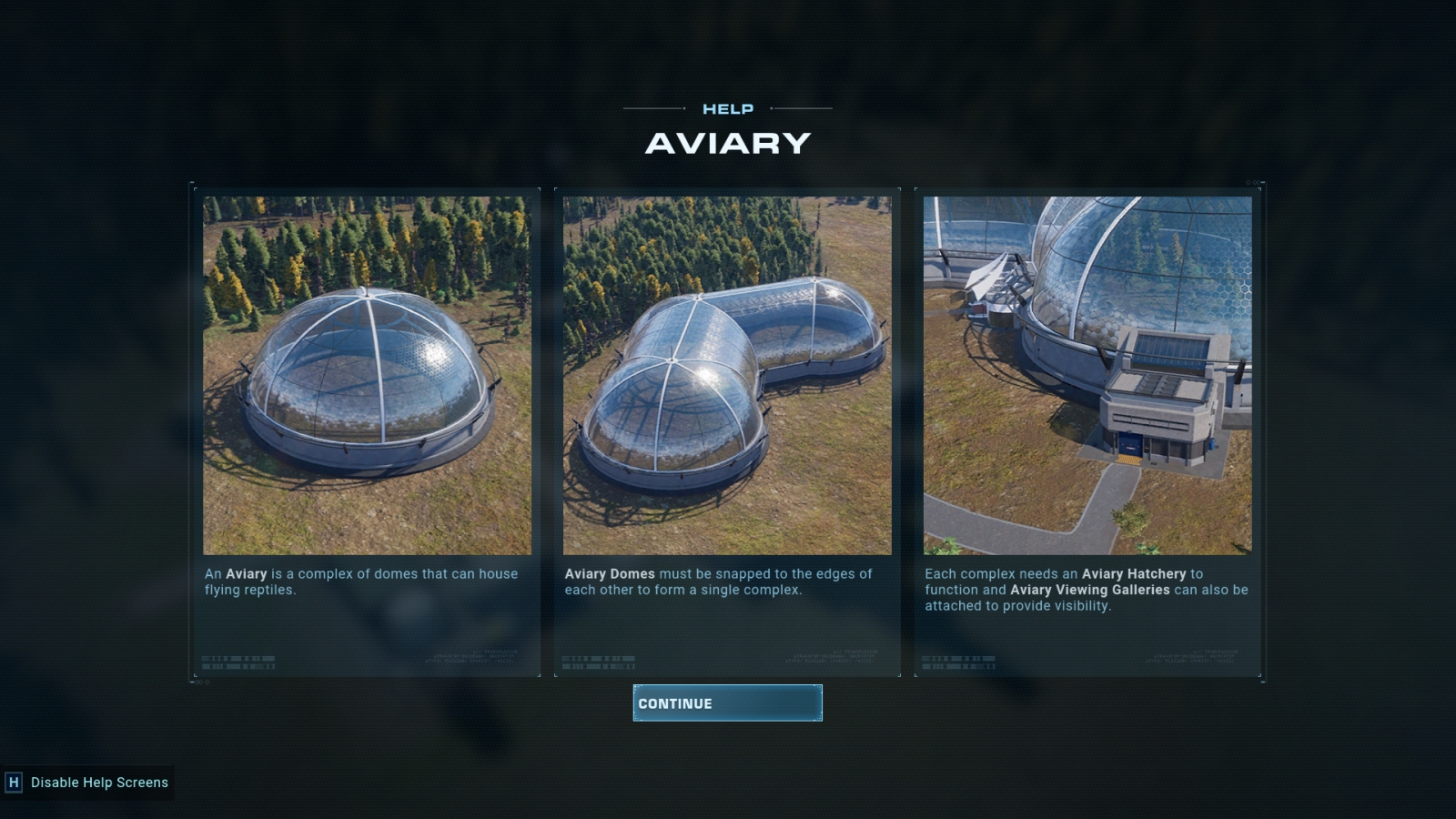 You can link multiple Aviaries and Lagoons together to create a larger enclosure for your new inhabitants! Make sure to give them lots of room.

The Aviaries and Lagoons attach together to build massive structures, and my one piece of advice is give your Pteranodons PLENTY of space, or they will break out and fly away. My flappers are all happy and content now that I gave them more space, more water, and an additional piscivore feeder, but man they didn’t like me much at the start. These new enclosures can be quite big and take up a lot of space, so you’ll need to plan things out a bit more than the last game.

I’ve also noticed that the dinosaurs have new interactions with one another, and some hilarious new attack animations when my Rangers go into the enclosure. Watching them rip the vehicle up while they scream never gets old, and I must confess I usually let any escapees have at it for a while before I tranquilize them.

There are a handful of new buildings, but probably the biggest change is we now have Scientists we hire that go on our fossil missions, perform research, and do the genetic engineering for us, but with it brings a whole new layer of management. Be sure to build a Staff Center right away to keep them happy, because if they experience too much unrest, they will sabotage your park. Make sure to give them breaks if you see their unrest bar going up by clicking on the individual Scientist and choosing the “Rest” option. Each Scientist will have certain abilities, and don’t be afraid to fire one if you need a different one to help you proceed with a certain mission. This wasn’t too obvious to me on a certain part of the Campaign, so make sure that you hire Scientists that can work on a variety of things. 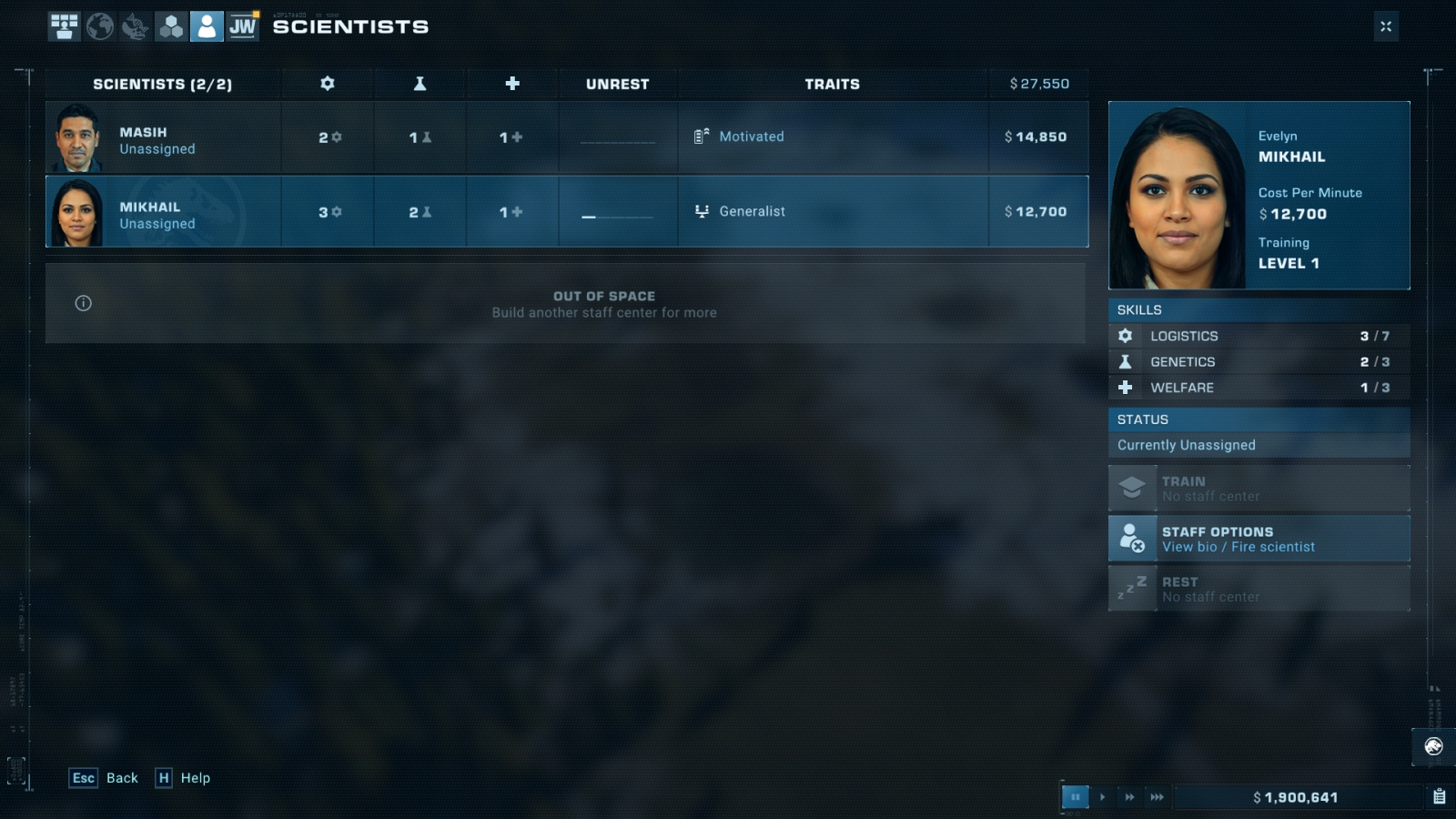 The all new Scientist tab, an upgrade from JWE 1.

We also have a Paleo-Medical Facility now that dispatches MVU staff out into the field to help injured and diseased animals. There are new diseases and you’ll use your Scientists to unlock the necessary Research to cure them. You must constantly stay on top of research so again…make sure you have a well-rounded staff that can do a bit of everything. In the event your dinosaur is injured with broken bones, you can now tranquilize and transport them directly to the facility to get them patched up. I really enjoyed watching the medical unit repair one of my dinosaur’s broken legs, and appreciate the extra time they spent creating the Paleo-Medical Facility so that you can watch. 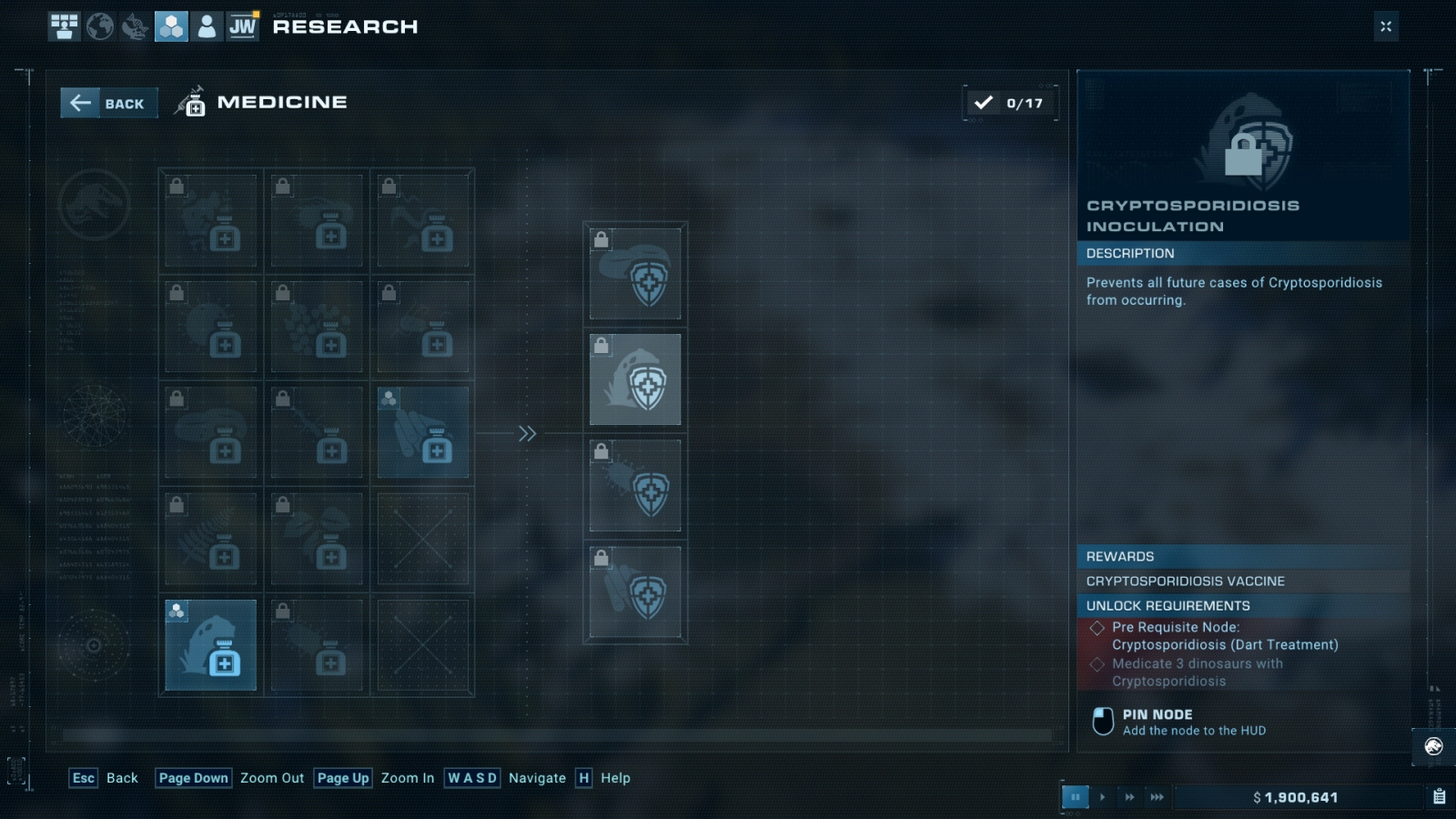 Plenty of new things to research this time around! Get to work on it sooner rather than later!

Something else that is new and exciting, is you can change the way your Guest Buildings look, as well as the items they serve within, which really makes your park more unique. There are some cool new decorations you can place within your park too! We also have the option to change the style of buildings to either Classic Jurassic Park, or Jurassic World in some cases, which is even more fun customization to make our parks stand out!

I have had SO much fun playing through the JWE 2 Campaign Mode, and Chaos Theory, and I am now on to the Sandbox mission in Canada where I hope to build a massive park. I sank so many hours into my original JWE game, and look forward to doing the same here. The only complaints I have about the game is that the Campaign was very short…I completed it in one evening, and I am hungry for more story! I also felt that certain things with the UI and how to proceed on certain missions weren’t always obvious. I’m crossing my fingers that we’ll get more content and playable missions via DLC like the original game.

Jurassic World Evolution 2 launches on November 9th for PlayStation, Xbox, and PC. Standard Edition is $59.99 and Deluxe is only ten dollars more at $69.99.

Whether you’re a seasoned Jurassic World Evolution player or brand new to the franchise, I can guarantee you that you will have a blast with Jurassic World Evolution 2. While I think a couple of things could be tweaked to make certain things more obvious, it doesn’t stop you from having an absolutely wonderful time playing the game. The addition of the flying and aquatic dinosaurs has been excellent, and I really hope for more content and DLC to go along with it!

Holly Hudspeth is a best-selling author living in Fort Worth, Texas. She has six published novels to date; The Skyy Huntington Series, which is an epic dark fantasy adventure, and One Small Detail, a stand-alone medieval fantasy. Holly also enjoys writing fan fiction based on her avatars from games such as EverQuest, Elder Scrolls Online, and World of Warcraft. Her first major purchase at the established age of nine was the NES, and she has been gaming ever since. She enjoys fantasy games, city builders, RPGs, MMOs, SMITE, and The Sims franchise. Most nights she is in SMITE with her husband and friends, or playing ESO. When she isn't gaming, she is probably either at Disney or planning her next trip there.
Related Articles: Jurassic World Evolution 2
Share
Tweet
Share
Submit