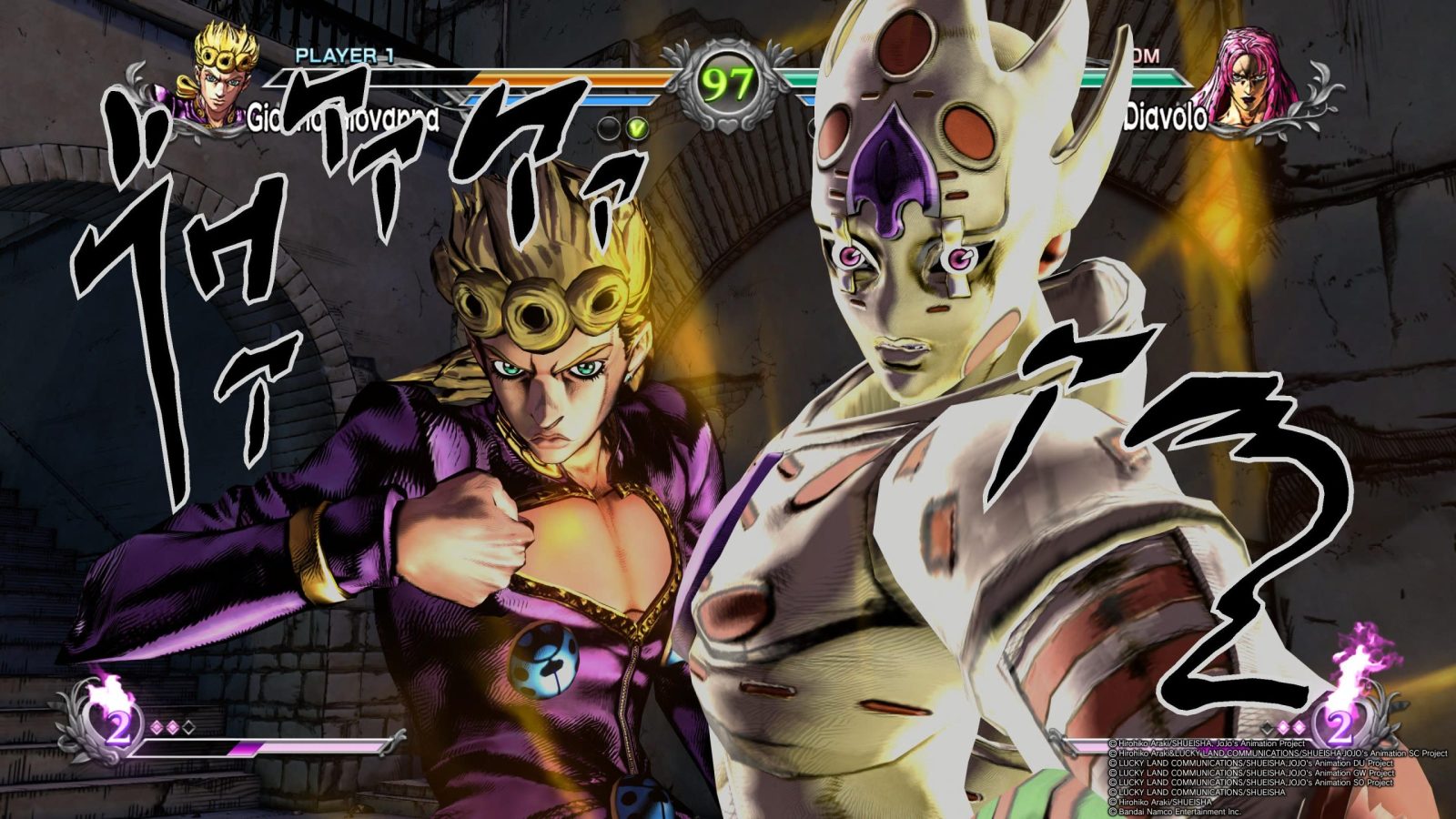 Returning once again into the fighting game space, Jojo’s Bizarre Adventure All Star Battle R is a remake of the 2013 release that adds new combat mechanics, visual upgrades, characters and modes. As a Jojo game, this is about as expansive and inclusive as you can get, and fans of both the manga and anime will find a lot to appreciate here. However, as a fighting game it does leave a bit to be desired.

There are five main modes to engage with, those being arcade, versus, online, practice and the brand new all-star battle. The story mode from the original release was scrapped and revamped into this all-star battle mode, which in my opinion works well for what it is. The story mode was paltry at best, so I wasn’t sad to see it scrapped in favor of something at least somewhat more enjoyable. This mode features canon battles from every part of the Jojo saga, as well as some non-canon extra battles. Part 8 however, also known as JoJolion, feels out of place due to Josuke Higashikata being the only character present from that section of the story, meaning he has no canonical battles to engage with. Completing these missions do offer various rewards, whether that be skins or alternate colors for characters, online character page customization, or gold to spend in the gallery shop. All-star battle mode definitely feels like an arcade mode with a few bells and whistles attached, but it was a fun incentive that let me try out a wide variety of the Jojo cast while unlocking items along the way. 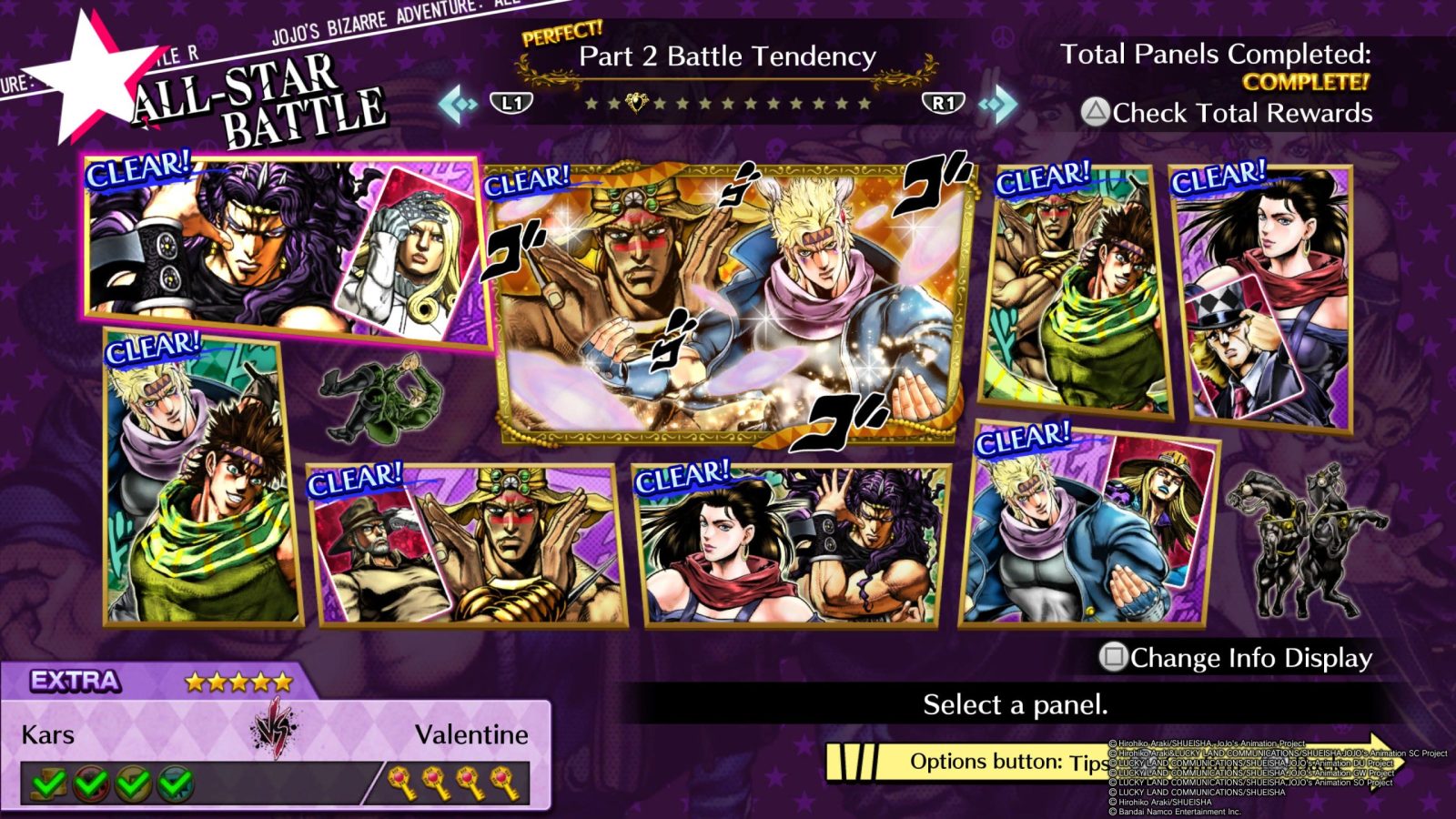 The combat style is that of a three-button setup, offering light, medium and heavy attacks with a dedicated dodge button to round out the movement. The game also includes an easy-beat option, which allows players to mash the light attack button for a simple combo, often ending with a flashy cinematic meter attack. On that note, each character has access to a meter bar that can be used for various moves, counters and cancels that differ from fighter to fighter. The biggest shift in combat from the 2013 version is the addition of assists that can be called in during battle. Every character on the roster can be used as an assist, and offer different uses depending on their assist style. Some place traps on the stage, some provide long range or short range attacks, and every assist can act as a combo breaker. They each have their own charge count that refills per round, but most have two offensive charges and one combo break charge.

There are four main fighting styles within the roster, which are Hamon, Mode, Stand, and Mounted – although some characters have their own unique style. Hamon is life energy that can improve attacks, while Mode provides different stances and changes moves accordingly. Stands are the physical manifestation of one’s will to act like a guardian of the user, and mounted characters have the ability to fight from horseback. Some of these styles overlap, like Gyro Zeppelli from Steel Ball Run sporting a mounted style while also having a stand. This is what makes Jojo’s ASBR such an interesting and fun fighting game, because with such a massive roster the amount of unique moves and combat opportunities is immense. 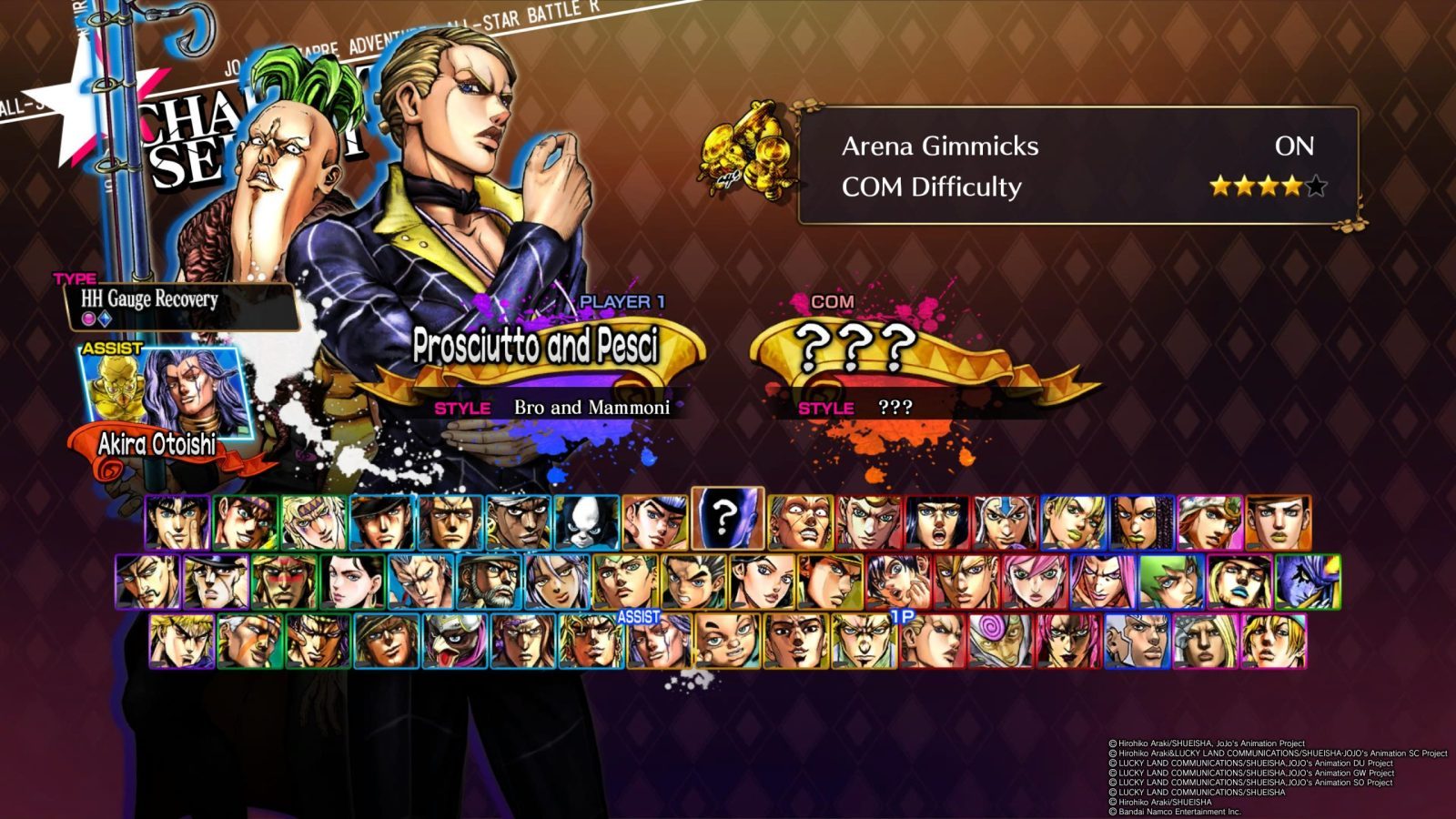 Improving on the already massive roster, the remaster adds ten more characters spanning the Jojo universe, totaling up to 50. These new additions include fan favorites like Robert E.O. Speedwagon from Phantom Blood and Trish Una from Golden Wind while also introducing minor characters like Mariah and Pet Shop from Stardust Crusaders. As mentioned before though, fans of JoJolion may be displeased that there is still only one character from that arc, and it does feel like a missed opportunity in some ways. An interesting note is that one of the new characters is actually a copy of an existing one, Jotaro Kujo from Stardust Crusaders, but in his Diamond is Unbreakable form. At first glance I figured they would be the same character with a different outfit on, but I’m happy to report that while they do share some moves, they fight differently enough to warrant the split. The original Jojo’s All Star Battle already had an impressive cast, and the remaster helps round it out even further with fun and interesting characters from various points of the story, with more coming down the line as paid DLC.

My favorite of the new additions is Prosciutto and Pesci from Golden Wind, a duo-character sporting the stands The Thankful Dead (The Grateful Dead) and Fisher Man (Beach Boy) respectively. While they are a two-in-one character, Prosciutto is the main fighter with Pesci serving as support from the side. These two passione mobsters have a lot of brawly attacks and interesting combo strings utilizing Pesci’s fishing-rod stand that offer a lot of range and control. 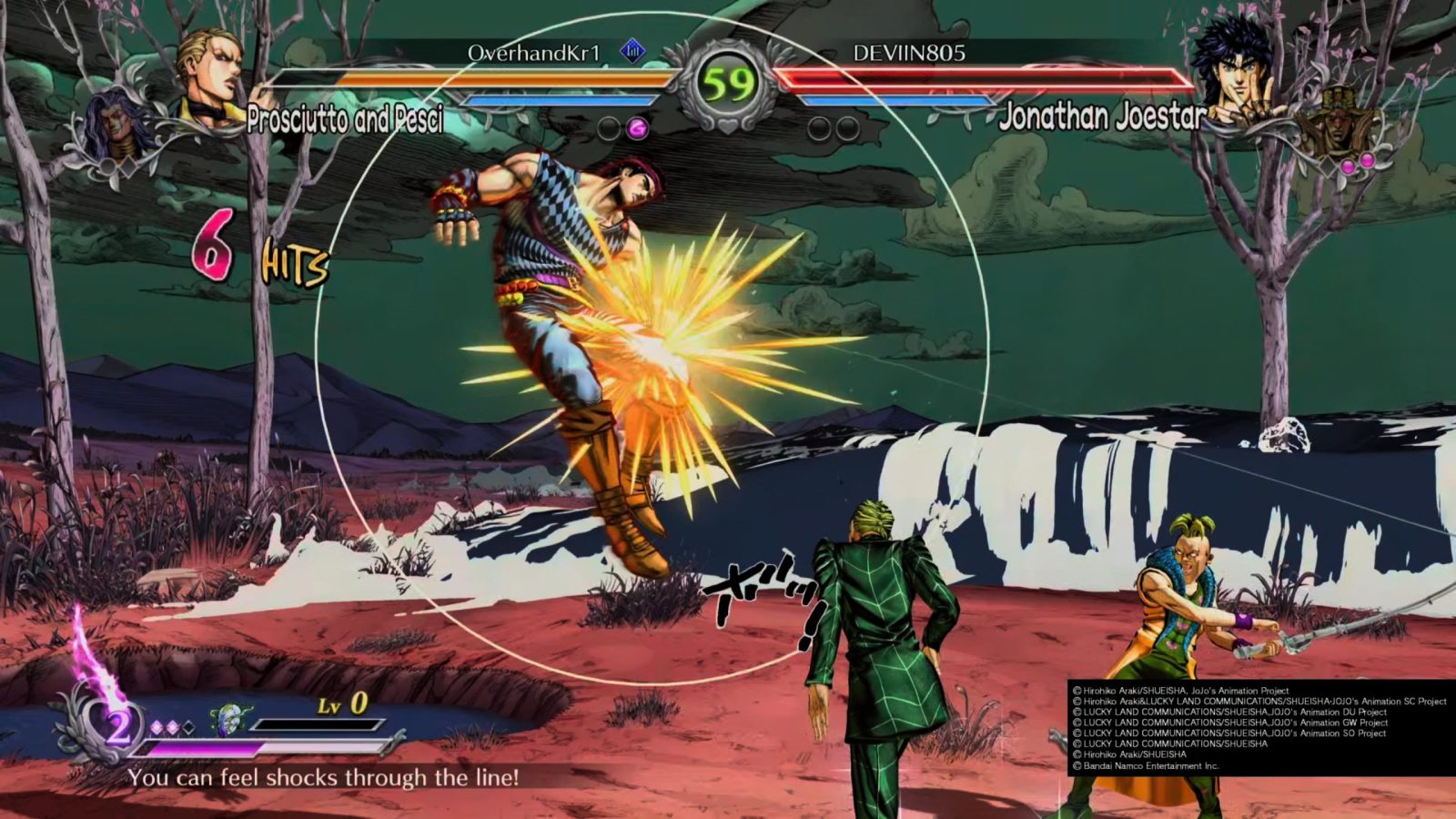 Fighting games often live and die by the quality of their online matchmaking, and unfortunately this is one of the major drawbacks of Jojo’s ASBR. Matches often feel laggy even when the displayed connection meter states that it should be stable, and I experienced instances of disconnections even before matches had begun. This is largely due in part to the fact that Jojo’s ASBR uses a delay-based netcode rather than rollback netcode. While playing with people near you and within your region, matches should still be stable, but the farther away your opponent is regionally, the lag and stutter becomes very noticeable. Another flaw of the online experience is the poor implementation of the ranked mode. Rematch is nowhere to be found, and the myriad of network issues means that crashes and unintentional disconnects count against you. This only serves to hamper the multiplayer experience even further, and may turn off competitive fighting players. To add onto the pile further, the versus mode features a tournament system that can only be played locally. Why this wasn’t made available for online is beyond me, and goes to show that this game is likely going to thrive more on the in-person scene rather than online. 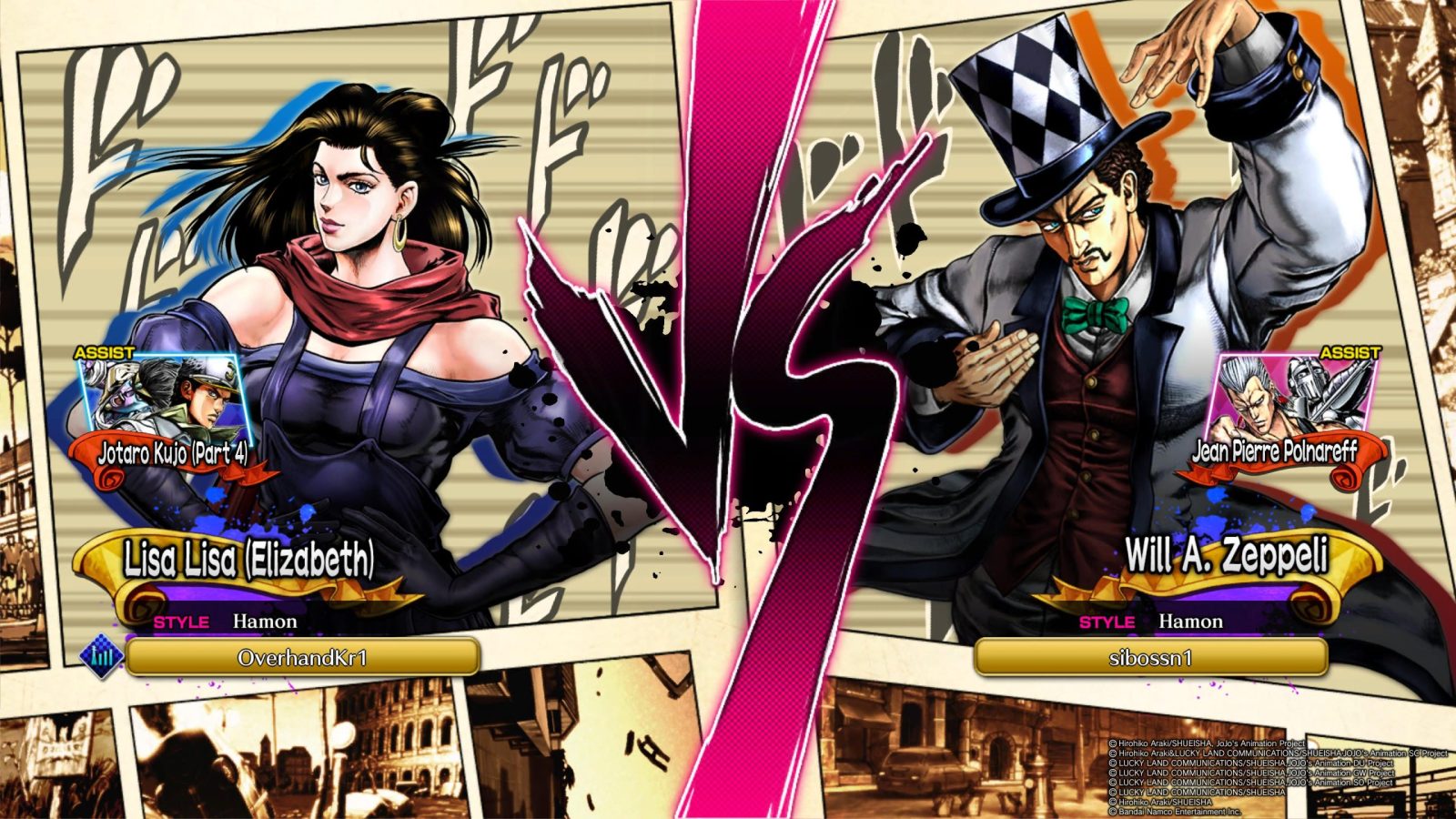 Ultimately, if you’re a Jojo fan you need to play this. There are so many characters and references packed into this game that it would be a disservice to yourself not to. The issue is convincing fans of fighting games to get into it without already being a fan of the Jojo series. The local offline experience has a lot to offer, but the same cannot be said for the online. There is of course the hope that the developer CyberConnect2 will implement a rollback netcode update, but given the track record of their fighting games, I wouldn’t hold your breath.

An amazing Jojo game, but a less than perfect fighting game. The massive roster and upgrades to the combat systems and visuals from the previous edition make this the definitive way to play Jojo’s All Star Battle. However, while enjoyable to fight offline, the poor netcode makes playing online a nightmare at times. The single player and local multiplayer experience somewhat makes up for this, but it’s a hard sell for those who aren’t already fans of Jojo’s Bizarre Adventure.

Corvo is a writer who loves to explore journalism through video games. Writing and editing reviews for triple-A games and indies alike, he finds his passion within expressing his experiences in a fair and accurate manner. Some of Corvo's favorite games are Destiny 2, Mass Effect, and Disco Elysium.
Related Articles: Jojo's Bizarre Adventure: All-Star Battle R
Share
Tweet
Share
Submit