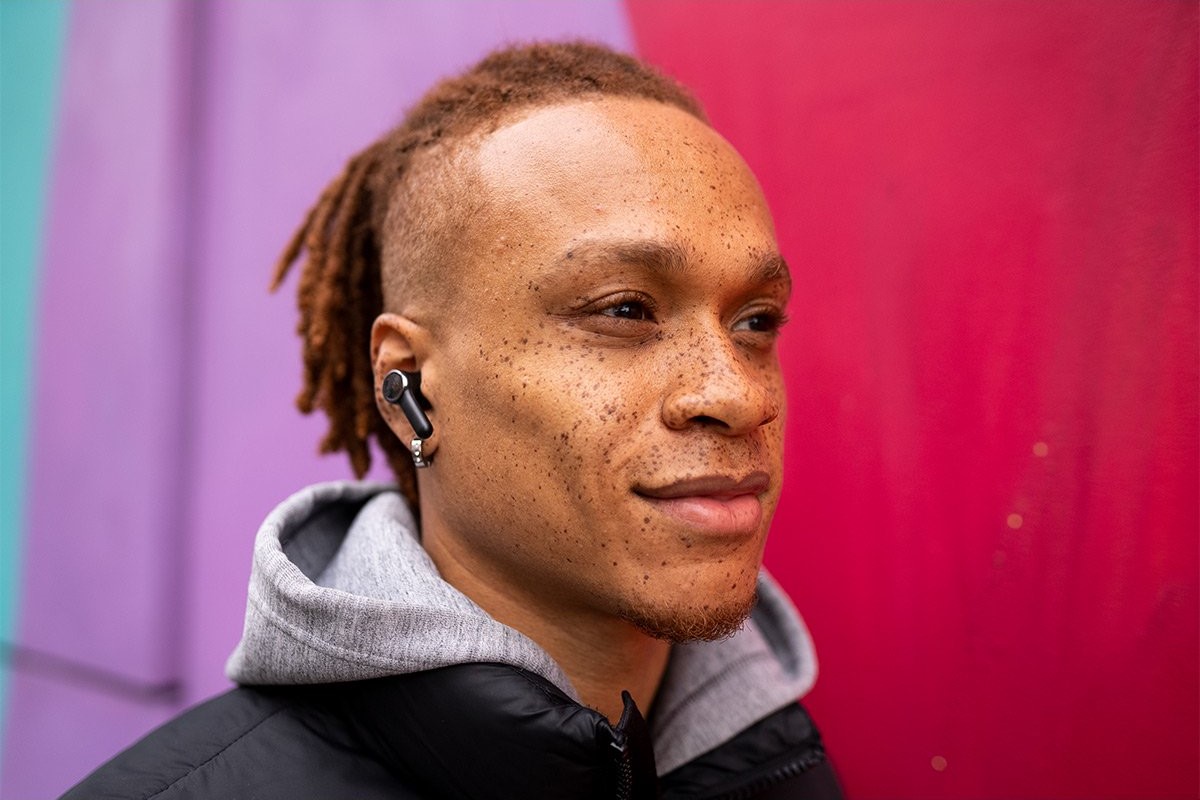 Earbuds are a part of our culture. Sure, on-ear headphones were first, but ever since the iPod commercials where people danced with earbud cables flicking around, earbuds have been cemented into our daily lives. As such, more advanced versions have come, and you can certainly do better than the ones you picked up at the dollar store. JBL has been in the market for a while, and with the Quantum TWS earbuds, they wanted to make sure everyone has a pair that will meet their specific needs.

In the box you’ll find most of what you’d expect: the Quantum TWS earbuds, a USB-C wireless dongle, charging case, USB-C charging cable, a few different rubber ear tips for sizing, and the paperwork. The charging case is pretty large. Not so much that it isn’t pocketable, but it’s bigger than some of the other earbuds I’ve carried. It dwarfs the Amazon Echo Buds and Google Pixel buds cases in comparison.

A big reason for this is the size of the Quantum TWS earbuds, as they are pretty big as well. Putting them in your ear, they fit pretty well, but I’m not the biggest fan of the earpieces themselves. This is what’s behind the rubber ear tip, a large piece meant to sit in your ear to keep it in place, but they don’t always fit as comfortably as I’d prefer. Because of that, occasionally I’ve experienced some discomfort from the bud when out of position. The other part, the cylindrical piece that hangs out of your ear and usually has an additional microphone function attached, is perfect. I barely noticed it was there.

What sets the JBL Quantum TWS apart is the aforementioned wireless dongle. It has a USB-C plug and it can be used either that way or in a USB-A port with an adapter. What’s really impressive is how easily it works. Plugging it in led to near instantaneous recognition with my PC, PS5, Steam Deck, and Meta Quest 2. This choice in design may have led to the charging case needing to be larger to include it, but it was well worth it, as it makes connecting to your favorite devices easier than ever. Unfortunately, even with the adapter, it still wouldn’t work on my Xbox. Sorry Microsoft fans.

Of course, Bluetooth is also a feature, and you can use it simultaneously along with your wireless dongle. That doesn’t mean you can run things alongside each other though, it just means that you can have Bluetooth attached so you can answer a call if it comes through. It very unceremoniously cuts off the audio from your dongle, so don’t expect a clean transition. Either way, it’s a nice additional benefit that you don’t get from earbuds. 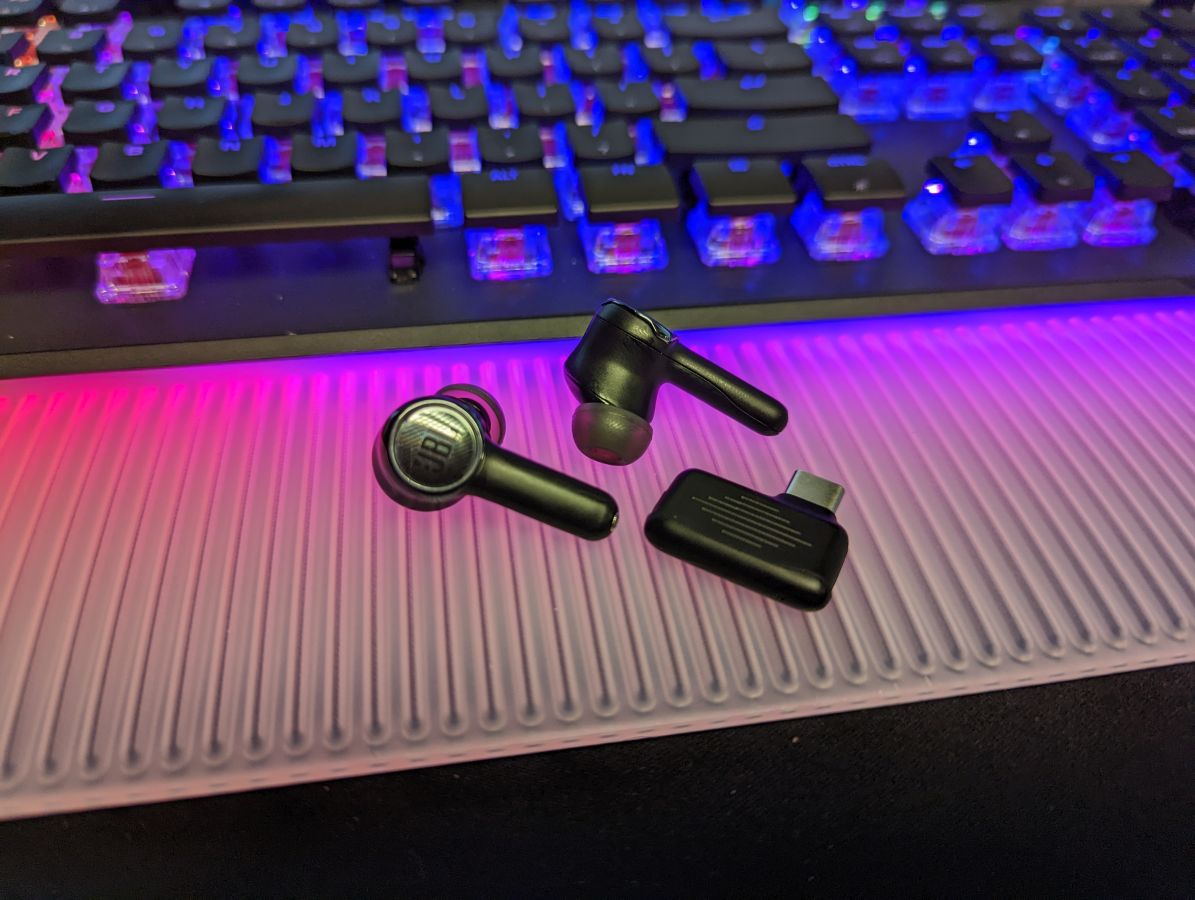 The sound quality of the Quantum TWS earbuds are going to be where most find the investment fruitful. Given the $130-$150 you may spend, you expect decent results, and you get them with these earbuds. I’ve tested the Quantum TWS across several different devices and they sound great on every one of them. On the PC, even though the surround sound wasn’t quite there for something like Call of Duty: Modern Warfare II, I could still hear directional sound decently enough to use it. Guns sounded great and the in-game chat could be heard easily along with it.

On PS5, I noticed the audio quality to be extremely precise. I’m not sure if it’s due to PlayStation’s 3D audio, but they’ve got a good handle on optimizing what you plug in. The Quantum TWS also seems to work best in a single player environment when on a PC or console, not competitive where you need every bit of sound data possible to make specific decisions. Yes, that exists in some single player games, but it’s not as prevalent.

Where the Quantum TWS earbuds may be at their best is with the Meta Quest 2. I do a decent amount of VR, but it’s not always comfortable to put a headset over the top of the Quest 2. Even though the speakers are pretty good, there’s something about earbuds or a headset that adds immersion. The Quantum TWS being light-weight, and having the wireless dongle which plugs seamlessly into the headset, makes for simple work. That, and the noise cancellation offered with the headset. Any sort of adaptive noise cancellation is a selling point for me, and it definitely is for these earbuds. It allows you to get the full immersive experience in VR, and that’s big in that space. 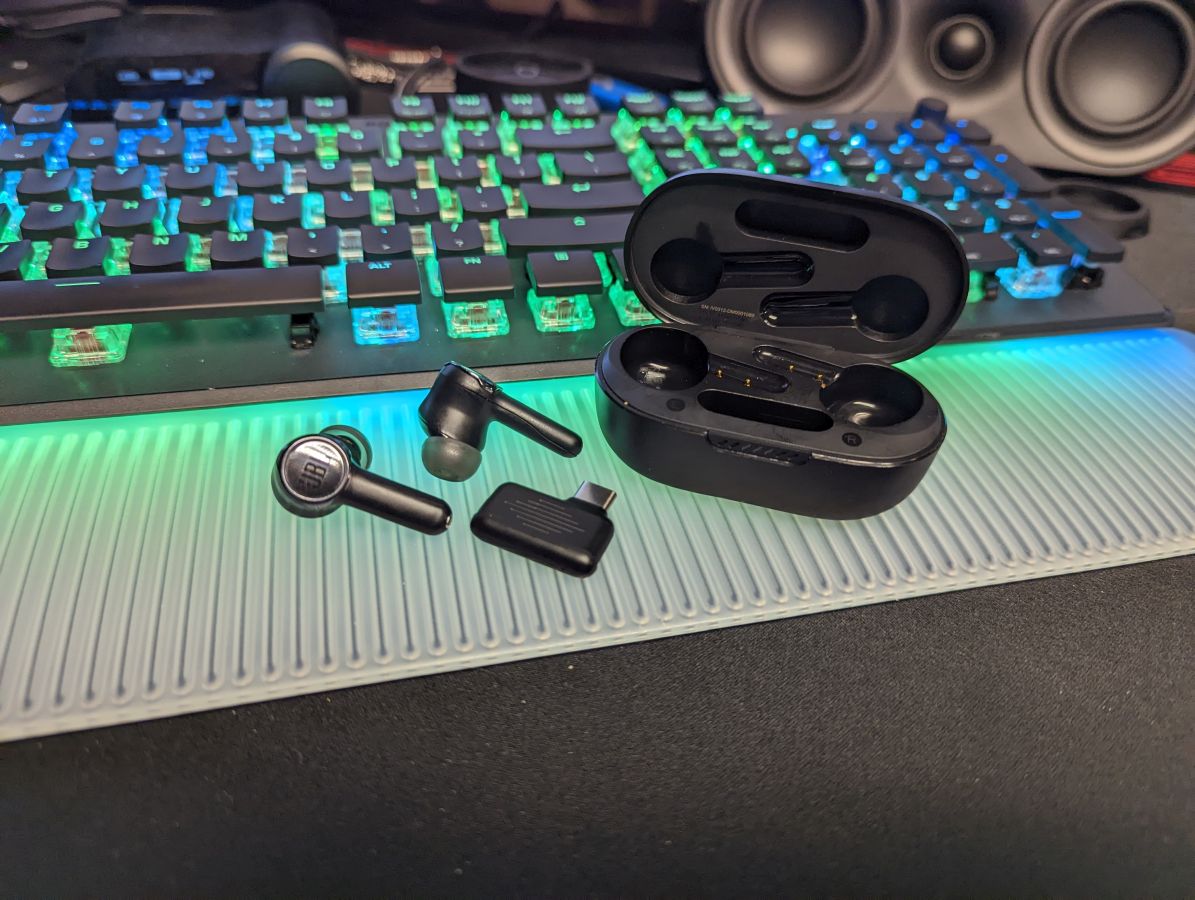 Obviously we can’t talk about sound quality without touching watching videos or music. I don’t expect a lot from earbuds, but I do want everything to be enjoyable as I listen. The Quantum TWS earbuds have a lot more to them than most, and they leverage that well. In regards to music specifically, I was amazed by the bass. I always listen to the song “Composure” by August Burns Red in my reviews, and it sounded fantastic. The different instruments can be heard as well, meaning the tuning of the earbuds has been done at a high level. I’m a big music lover, and these earbuds allow you to listen as closely as you’d like, not just pumping the sound in willy-nilly, or overwhelming you with volume to seem like it’s intricately done.

Part of getting great audio is the software managing it, and we’ve talked about JBL’s QuantumENGINE in our review for the JBL Quantum 810. Something that’s more impactful for the Quantum TWS earbuds is the JBL Headphones app. I’ve long been wanting an app focused on making my earbud experience better, and this one does. It has different equalization presets, allows you to make custom ones, gaming mode vs music mode, and runs you through every feature the Quantum TWS provides. It has a “find my earbuds” function as well, but it isn’t as useful as you’d hope, given they have to be connected through Bluetooth to your phone. 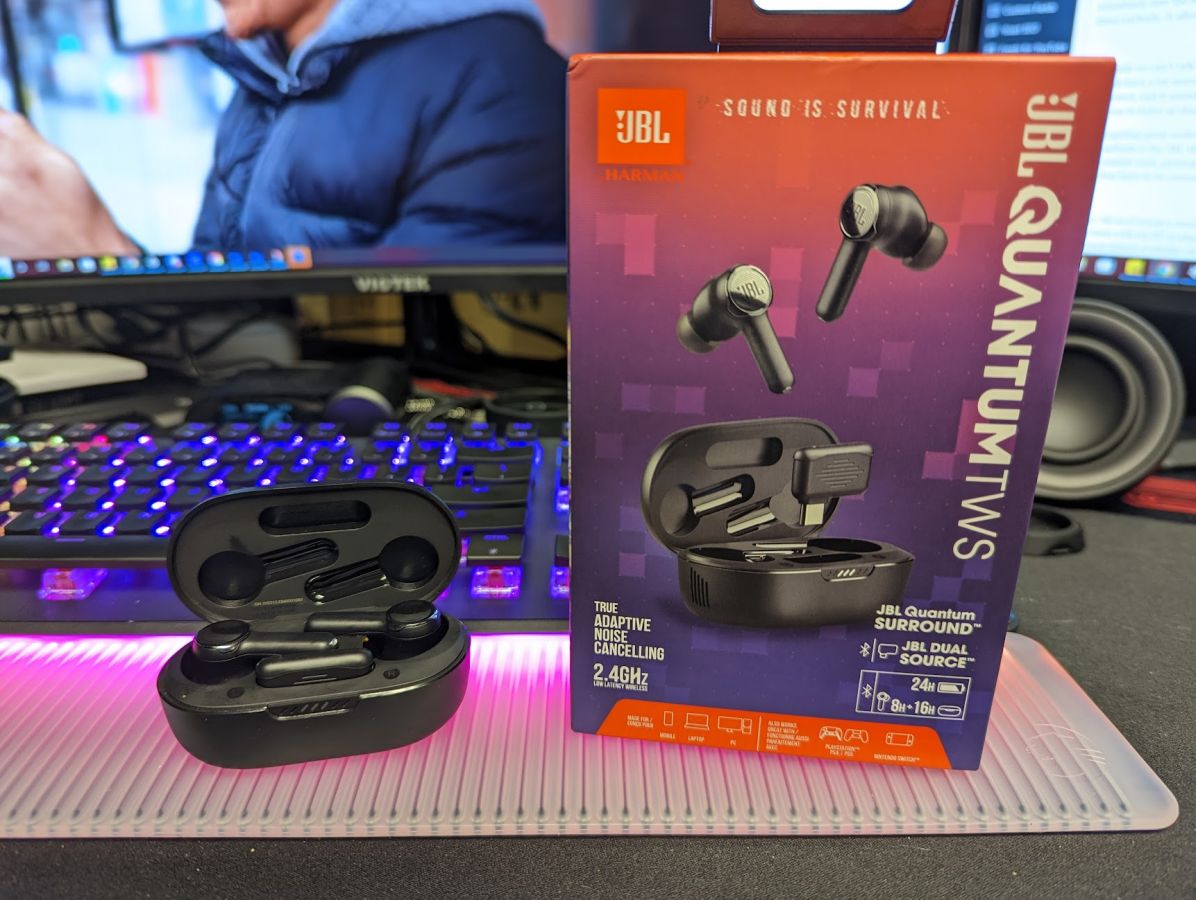 Battery life is of course a must with anything wireless, and I’ve been able to use them for a good amount of time without thinking about it. Anytime you can say that, the battery is pretty solid. Even using them with my PC to play Modern Warfare II for a couple of hours, they were only down to about 60-70%. The box and JBL themselves advertise eight hours when fully charged, and an additional sixteen available via the charge the case has. After using them for a little while, I certainly believe it.

Lastly, let’s talk about the microphone on the Quantum TWS earbuds. It will do nicely, and these are even Discord certified, but it doesn’t pack a punch when a lot is going on. I used said microphone when playing Modern Warfare II, and my team had a tough time hearing me. Listening back to recordings, I was pretty low, and in the end it just wasn’t enough to warrant me using them full time. That being said, the mic works perfectly fine for phone calls and other chats. It’s just probably not the ideal mic to use with gunfire and explosions around you.

The JBL Quantum TWS earbuds punch above their weight, with great audio quality that will enhance your gaming, viewing, or music experience. They aren’t the most comfortable earbuds out there, but they make up for it with solid battery life, adaptive noise cancellation, and working with nearly every device you own. With a headphone app on your phone to optimize them even further, the Quantum TWS earbuds are a worthy purchase.

David Burdette is a gamer/writer/content creator from TN and Lead Editor for Gaming Trend. He loves Playstation, Star Wars, Marvel, and many other fandoms. He also plays way too much Call Of Duty. You can chat with him on Twitter @SplitEnd89.
Related Articles: JBL Quantum TWS gaming earbuds
Share
Tweet
Share
Submit