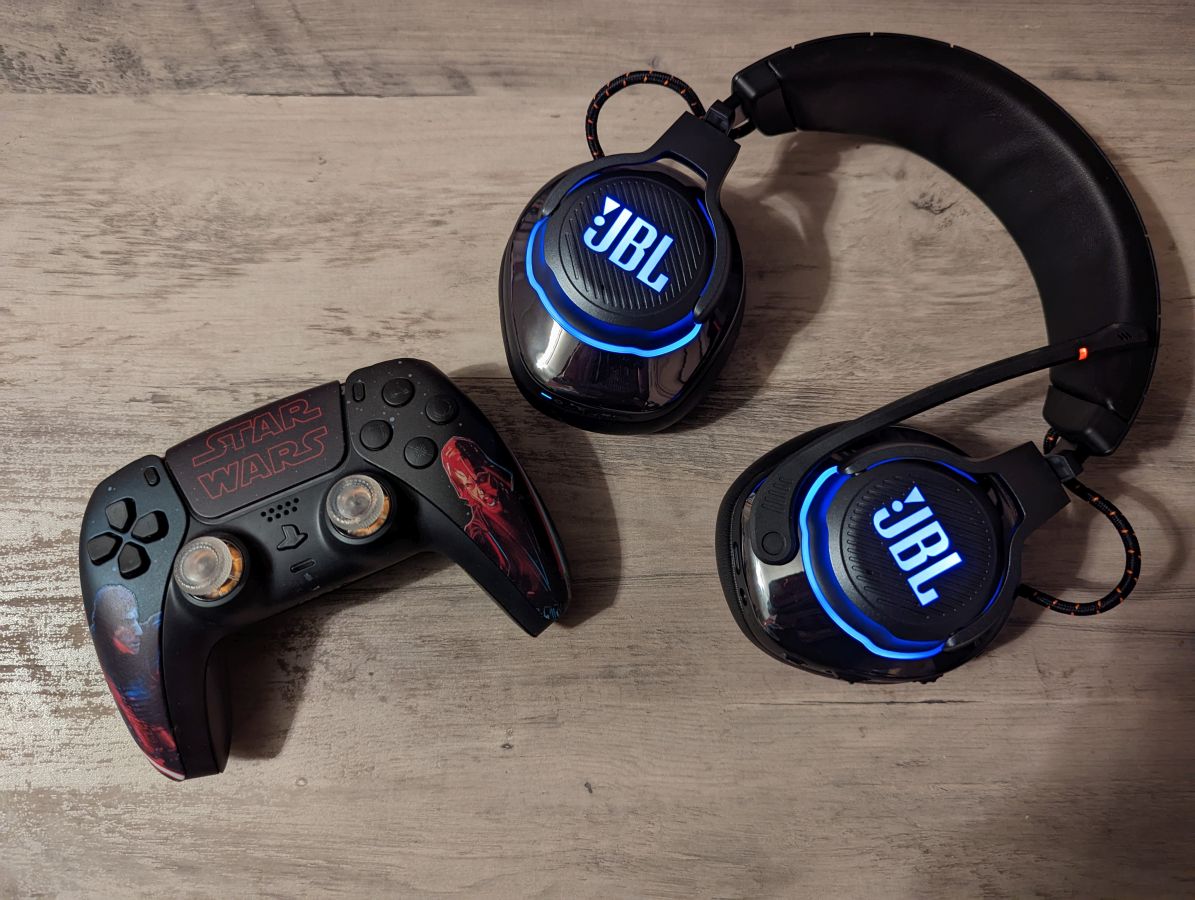 Gaming headsets can save your life. Well, at least in a nail-biter of a match in your favorite FPS that is. Audio fidelity should never be ignored, and whether you’re growing carrots on a farm, ripping demons to shreds, or screaming callouts in capture the flag with bullets flying around your head, being able to hear what’s going on and differentiate one thing from another is important. Everyone has a headset they lean towards when it comes to playing games, and if you’re looking for one to stand by, JBL is now pushing forward into the space. With several models now on the shelf, we’re looking at the newest and baddest, the JBL Quantum 810, and after some time with it you certainly shouldn’t sleep on this company’s offerings.

As per usual, let’s get inside the box. In it you’ll find the Quantum 810 (of course), the wireless USB dongle, a braided USB-C charging cable and a 3.5mm cable. Thank you again to the designers moving forward with USB-C charging, it’s the best. You’ve also got all the documents in the box you need for instructing you on what the headset does. While the Quantum 810 is largely self-explanatory, it’s nice to have a hand if I’m curious about a specific function.

The first thing you notice about the Quantum 810 is that it’s a BIG headset. There are 50mm drivers inside it, so I expected as much, but it’s even bigger than I initially thought. Even with my large ears, the earcups easily encompass them. For all the plastic that’s used in the build of the 810s, I’m also impressed with the sturdiness of them. It’s easy to design a large headset, but there are always weak points in there somewhere. The only place I can find on these that may be an issue is the hinge that allows the earcups to move around, and even that seems very strong.

One of the things I worried about with a big headset like this was the comfort, and while it’s not a concern, it isn’t as comfortable as others. The Quantum 810 isn’t just large, it’s heavy, and all of that on your head for extended periods of time can be tiring and eventually hurt a little bit. The headband is actually a lot better at negating this than I had imagined, and it doesn’t give off that “hot” sensation that some can. That said, the headset as a whole isn’t the image of comfort.

When you get under the headset though, that’s where things really come together. The Quantum 810 is packed with tons of amazing features, and I’m in love with the offerings. Maybe I’m a weirdo, but the little musical sound indicator to let me know it’s on or off alone is a huge pro for this headset. Little details like this can make or break an experience, and this one makes it better. 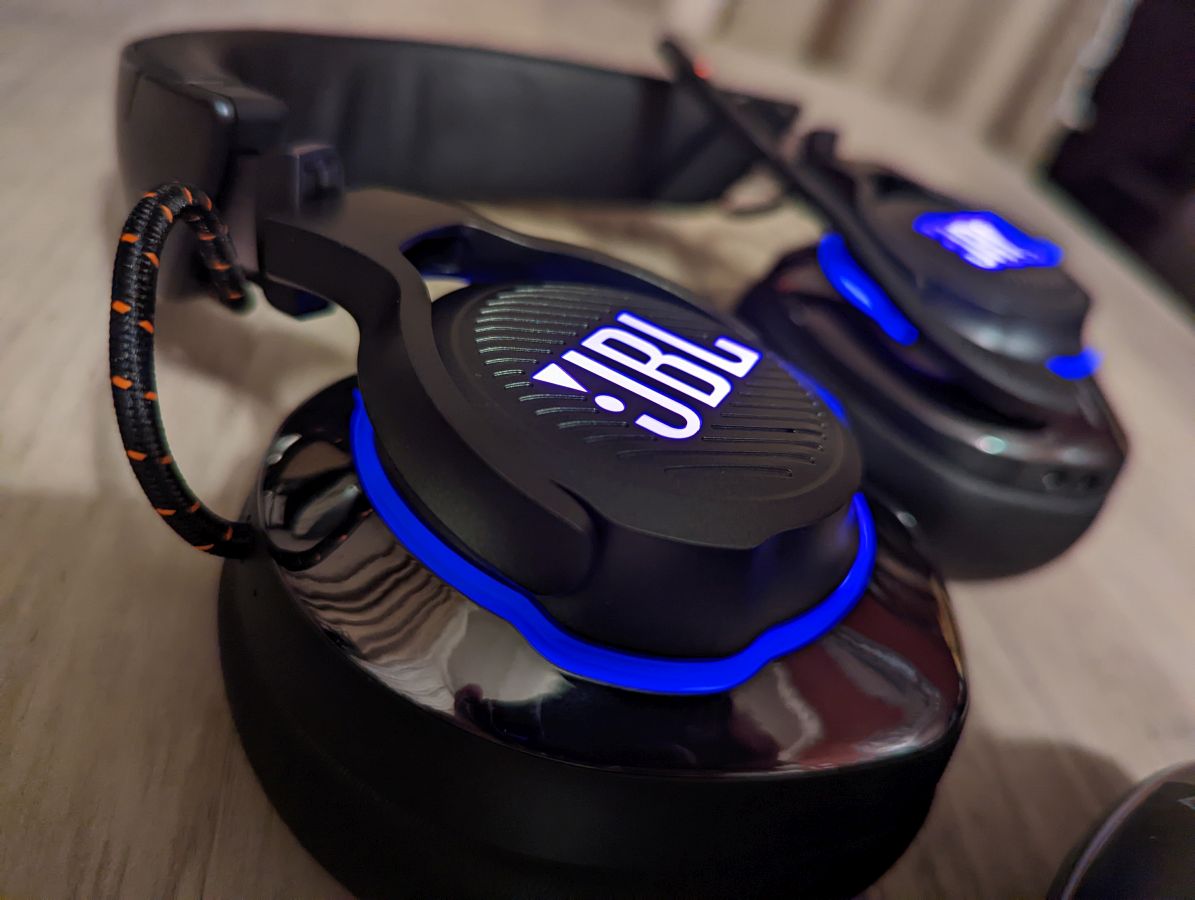 A bigger detail is compatibility, and this headset is going to work with nearly any device you own. Via the USB dongle, you can use it wirelessly with your PC or PlayStation. With the 3.5mm jack, it’ll also work for the Xbox or Switch, although with some drawbacks given its passive use. For anything else, you can connect it via Bluetooth. This also means you can be connected to your phone to answer calls or other things while connected to the USB dongle, another bonus the Quantum 810 offers.

Arguably my favorite feature available is Active Noise Cancellation, and it works to perfection on the Quantum 810. I’ve used headsets with it before, and the 810 is on par with how much it quiets your surroundings. My barometer is always my downstairs AC unit turning on and pushing the sound of air through the vents, and with the Quantum 810 it disappears. What’s more is the ANC is built into the headset, with a button to turn it on and off on the right ear cup. This means you can use it as long as the headset is on, so via Bluetooth or the USB dongle you can always take advantage of it. Sadly, that does mean ANC won’t work with your 3.5mm jack devices.

Then there’s the noise you don’t cancel out, that being the audio you’re wanting to hear. The JBL Quantum 810 is an all-around performer, a jack of all trades when it comes to all the different forms of media you want to ingest. When it comes to music, it has a nice sound to it. Movies or TV shows also sound good, with some 3D audio to boot. In testing gaming I’ve enjoyed what I’ve gotten, with Returnal having that spooky ambiance and Modern Warfare II’s beta giving me some great directional audio for footsteps. Accompany all of that with some well tuned bass that’s a good blend of impactful yet detailed (nothing that will rattle your brain thankfully), and there’s plenty to be pleased with. 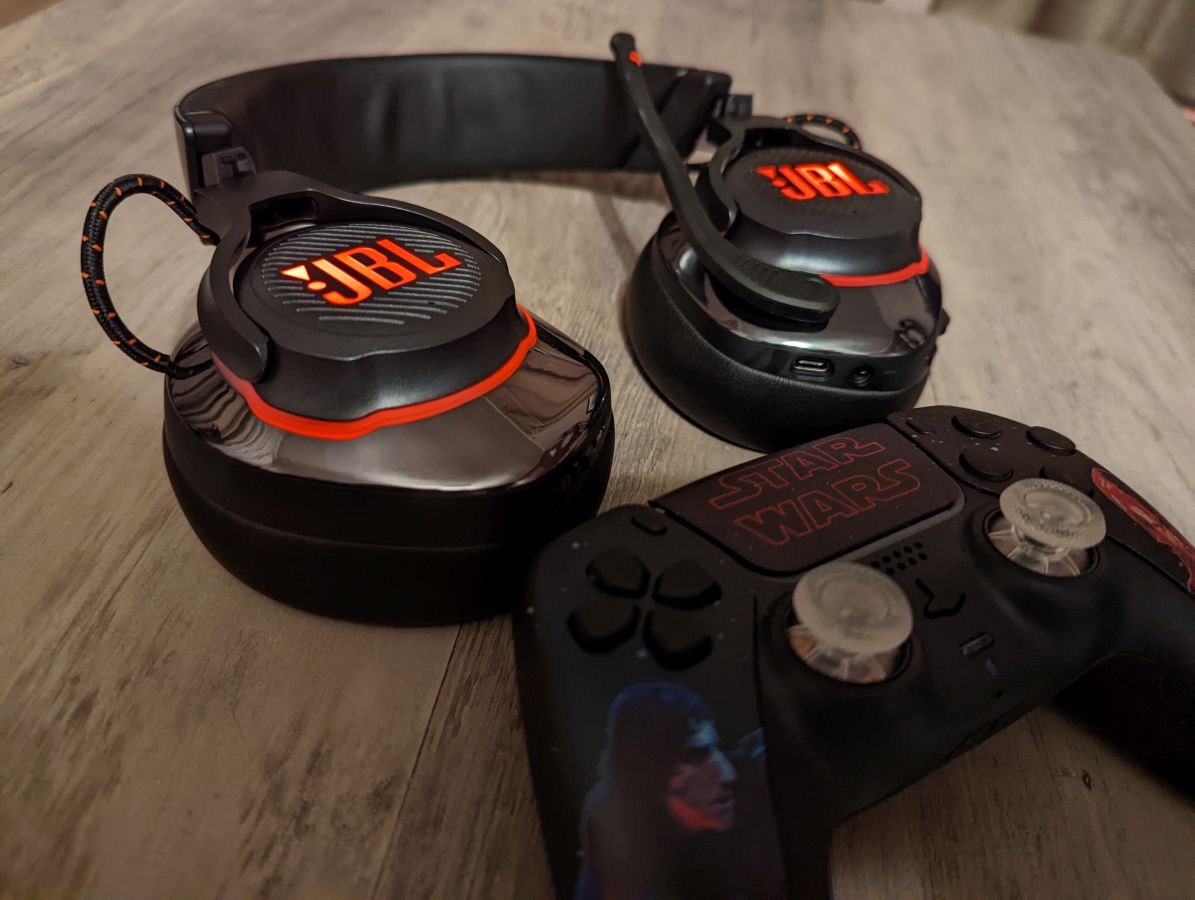 All in all, I’ve got nothing to complain about, but I haven’t necessarily been wowed either by the audio. This is a perfect journeyman headset, where you’re going to get good quality, but not be blown away. The good news is there’s raw potential here, and if JBL can keep optimizing what they’ve got, it could turn into something incredible.

The microphone on the other hand has been a bit of an enigma. On PlayStation, my voice came through well, but I was often told my mic was too hot. Attempting to turn it down via the system settings didn’t do much either. On PC, you’re able to leverage the QuantumENGINE to drop the input volume, but at least via Discord I was told my mic didn’t sound great. Maybe I missed the middle ground in all of the settings, but for a Discord verified microphone, I had a lot of issues. I could still be heard mind you, but the feedback I got from my friends wasn’t great. Besides that, one thing we can all agree needs to be a regular feature on headsets; a flip-to-mute mic. It’s one of the best recent innovations in headsets, and should be a standard, so I’m glad the Quantum 810 has it.

When it comes to battery life for the JBL Quantum 810, it falls into the category I love for headsets. That is, I didn’t really worry about it. Wireless headsets are always my preference, but often you worry about battery life. The Quantum 810 advertises 43 hours of battery life (without RGB), and I completely believe that. I spent eight straight hours playing the Modern Warfare II beta, and without a single low battery notification. Even if you forget, you can charge it while playing, and given the USB-C charging, it won’t take long to get an optimum level of charge to unplug. Multiple days of battery life is pretty awesome for anything, especially a headset, and the Quantum 810 excels in that area. 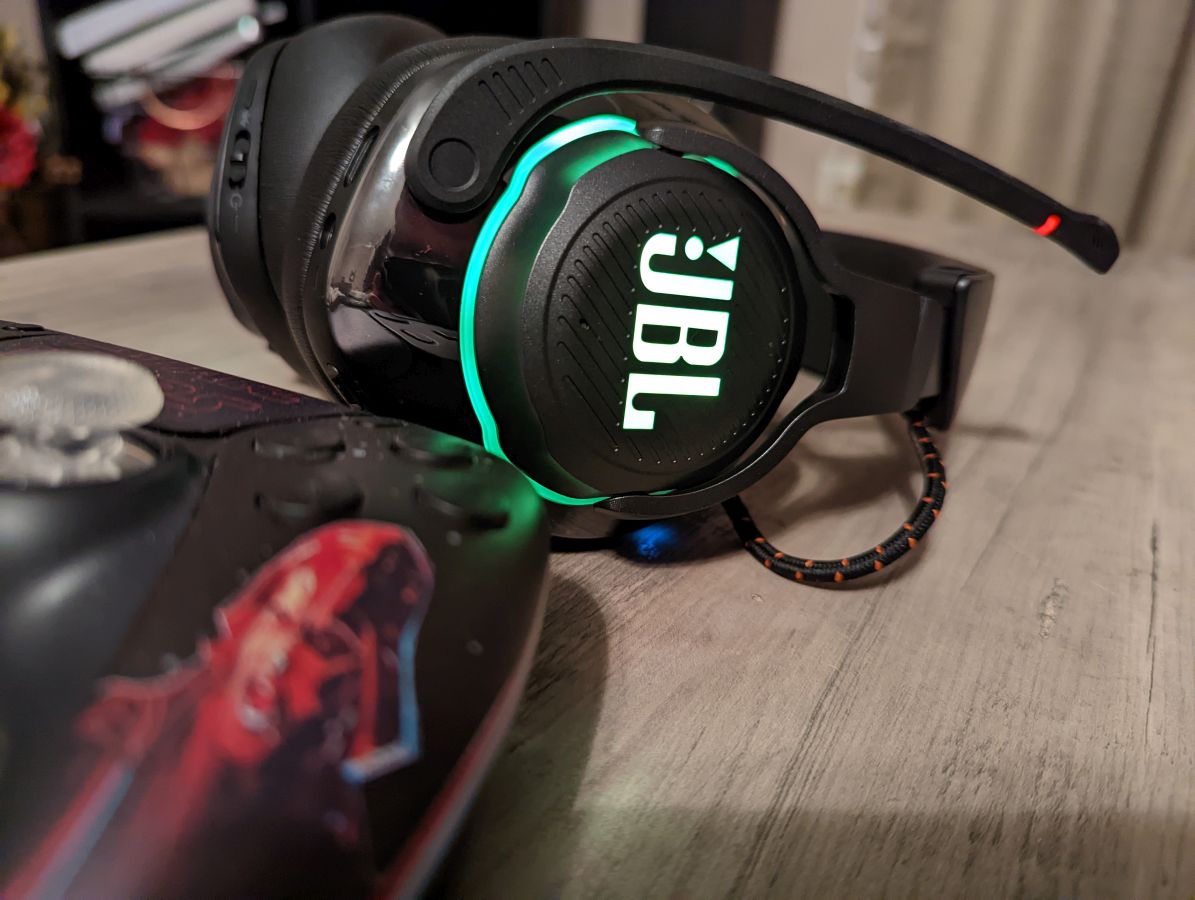 Last but not least, let’s talk about JBL’s QuantumENGINE software and the RGB lighting. The QuantumENGINE software is JBL’s control center on PC for their headsets. I do like the additional options; being able to set equalization, mic volume (on PC), turn on spatial sound and the like is wonderful. But it’s a bit cumbersome, and I feel like it’s still in the beginning stages of being shaped into whatever image JBL sees. The spatial sound in my opinion needs more fine tuning, and the software as a whole shouldn’t only be available if I’m plugging a JBL headset into it. You can also adjust the RGB lighting that’s on the outside of the earcups, which is actually super cool. I’m not someone who wants RGB on everything, but it actually works well on the Quantum 810s. There aren’t a lot of options to choose from in the software, but just being able to change things is an awesome feature to have.

It’s not without its quirks, but the JBL Quantum 810 is a fine headset with a ton of great features. Good sound combined with fantastic active noise cancellation will always grab my attention, but add in a great battery, RGB, and flip-to-mute mic? All while working on almost every platform? Now you’re just showing off.

David Burdette is a gamer/writer/content creator from TN and Lead Editor for Gaming Trend. He loves Playstation, Star Wars, Marvel, and many other fandoms. He also plays way too much Call Of Duty. You can chat with him on Twitter @SplitEnd89.
Related Articles: JBL Quantum 810
Share
Tweet
Share
Submit