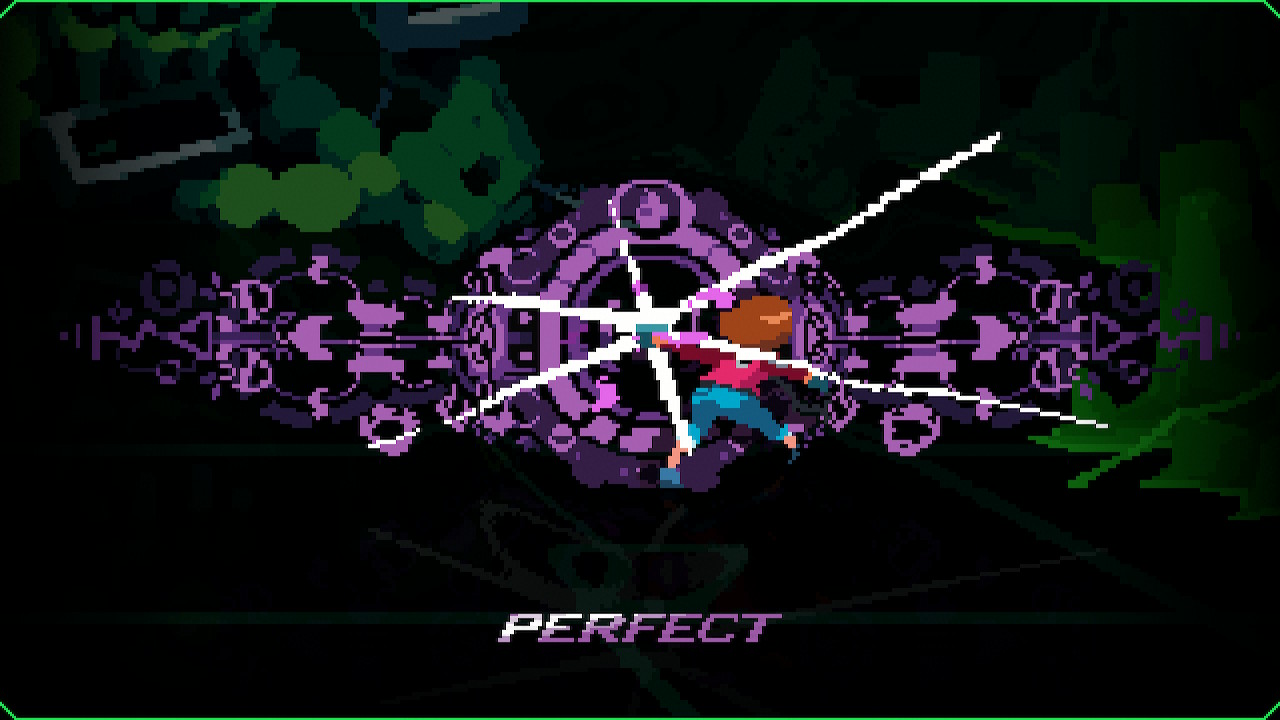 In 1997, a natural disaster destroyed all technology on earth. This event caused governments to collapse, replaced by corporations bringing even more advanced tech back to the masses. Decades later, Noa Solares works as a freelance hacker along with her partner, Ryder. When her estranged father is suddenly kidnapped by MonoMind, the two take the fight to the corps to rescue Noa’s dad and free Bright Town from tyranny.

Jack Move is a cyberpunk RPG where you only have a single party member: you. As a huge fan of all things RPG and cyberpunk, this obviously had my attention. While it certainly has a few issues, I think the game accomplishes most of what it sets out to do. As Noa, you’ll explore several locations just outside of Bright Town like a scrap yard, the slums, and the upper class zone owned by MonoMind. The “dungeon” areas use random encounters, but you can customize the encounter rate however you like by pressing plus, even turning it off entirely.

Combat is the highlight of Jack Move — it’s quick, simple, and deadly. At the top right of the screen, you can see the turn order while the bottom left displays Noa’s HP, MP (but technology), status effects, and Jack Move meter. Everything Noa can do in battle aside from basic, physical attacks is determined by her Deck’s hardware and software. You can equip up to three pieces of hardware which do things like countering every single enemy action with a physical attack or automatically scanning all enemies at the start of battle. Meanwhile, software determines what “spells” you can use, like elementally aspected offensive attacks, buffs and debuffs, and of course healing. Each piece of software uses up blocks of RAM when equipped, and while you only start with four slots you can upgrade up to a max of 16. Essentially, Hardware are passive abilities while Software is how you take care of business.

When your turn comes around, you have several actions you can take: Hack, a standard physical attack; JACK MOVE, which we’ll get to in a bit; Execute, which allows you to use equipped software; Install to swap out software; Patch to use items; and finally Cache, your defend command which also banks your turn further down the order, usually next to your following turn. Most enemies have a weakness to one of the three “elements” of offensive software like rock paper scissors. You’ll of course want to exploit those weaknesses, but the real fun comes in setting up Noa to take on these challenges. 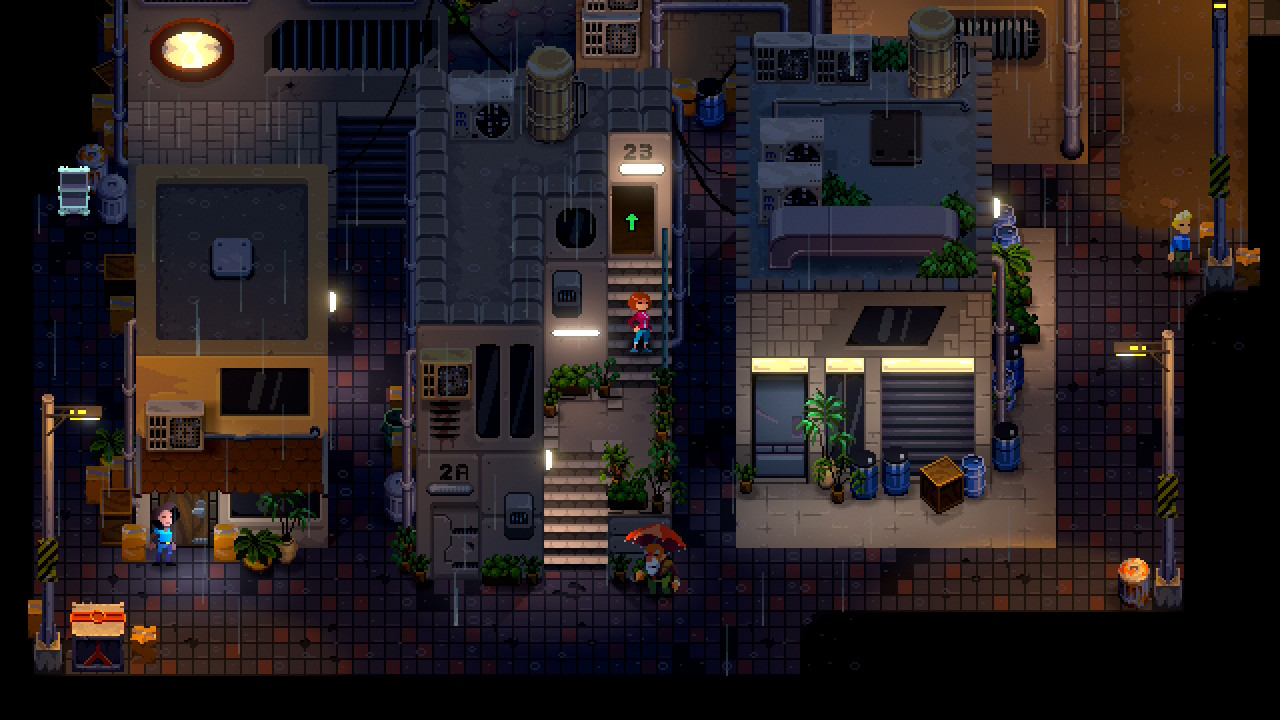 For a majority of the game, I got by having all three types of elements equipped and just busting them out accordingly, occasionally healing to keep myself alive while I whittled down the enemy’s health. This can get you through most battles, but it’s a lot more fun to create software builds on the fly to absolutely devastate your opponent. For example, if a boss is weak to Wetware, you can use Install to change your loadout on your first turn, equipping the highest tier of that element along with any buffs or debuffs to give you an advantage. Then you can start going to town and shredding their health bar in a few actions, adjusting your strategy accordingly to make sure their hard hitting attacks don’t kill you in a few shots. You might want to use Cache if they’re charging up a big attack so you can heal up and remove any debuffs, or break out a Jack Move to kill them before they get the chance. It’s a lot of fun once you get into the swing of things, with a tough final boss that will really test your preparedness and tactics.

For the game’s namesake, I do find JACK MOVES to be a bit of a mixed bag. Dealing and taking damage will build up the meter, and when it’s full you can use one of four elements of screen nukes, dealing massive damage to all enemies if not killing them outright. There’s a DDR-esque minigame before you can execute the move, but I found success or failure here to be negligible as the attack goes off regardless. While it’s fun to just delete enemies since the gauge retains between fights, it feels a bit too powerful. Until very late in the game, these will absolutely destroy everything you encounter, even one-shotting the first real boss. The meter builds pretty quickly too, making them feel like a get out of jail free card that comes up a bit too often to be balanced. 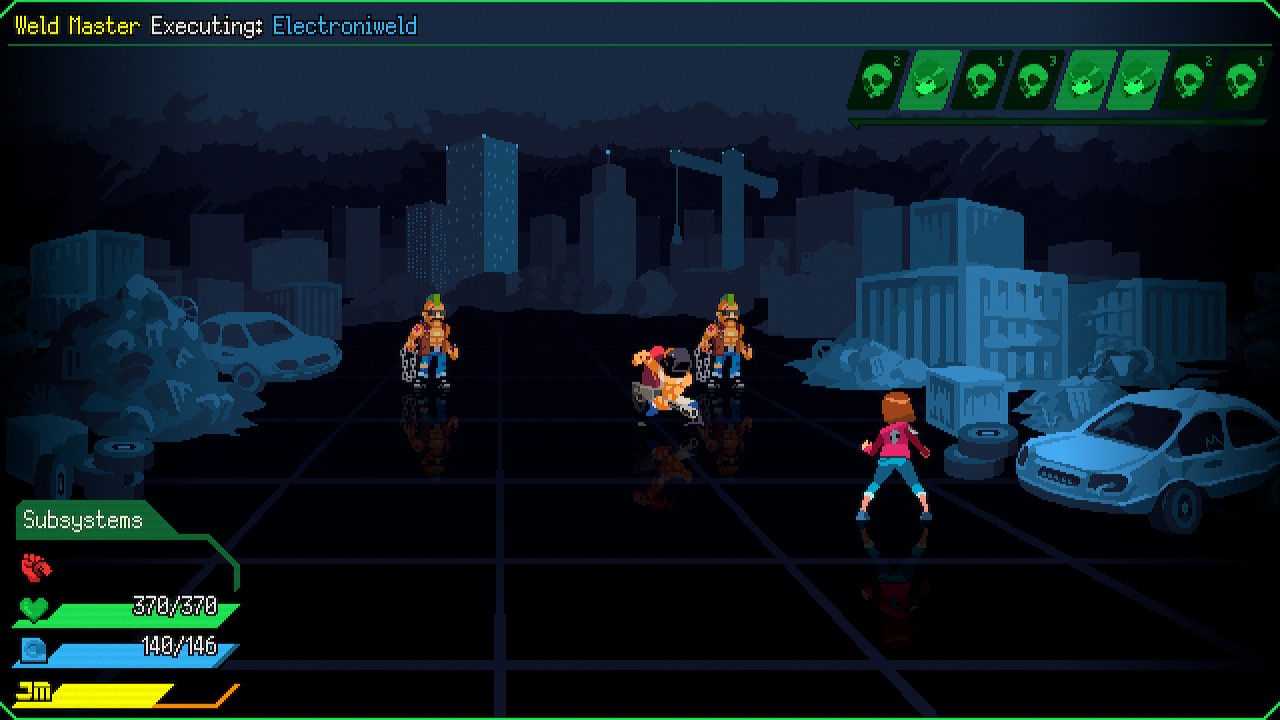 On a related note, while I did die a few times I feel the game is too easy for my tastes, especially considering how brief it is. Doing just about everything had me roll credits after about 6 hours, which I think is the perfect length to fully explore Jack Move’s systems. However, it does make me crave some sort of new game plus or even just difficulty options. It felt like the final boss forced me to actually master the combat, and I wanted to go through the game again with that kind of challenge in mind. Unfortunately, there’s only one difficulty, though I probably will go back and play again to try out different builds regardless.

This entirely comes down to personal preference, but I’m not a big fan of the game’s art style. The visuals when exploring are very zoomed out, with small character sprites that lack detail while battles are more close up but still retain that simplicity. Don’t get me wrong, the game does look good and I certainly appreciate a widescreen aspect ratio when many pixel art RPGs use 4:3, it’s just not my cup of tea. However, I do think the portraits for important characters really could have stood to be larger and more detailed. They work for the plentiful silly moments, but I feel like they detract from some serious scenes. 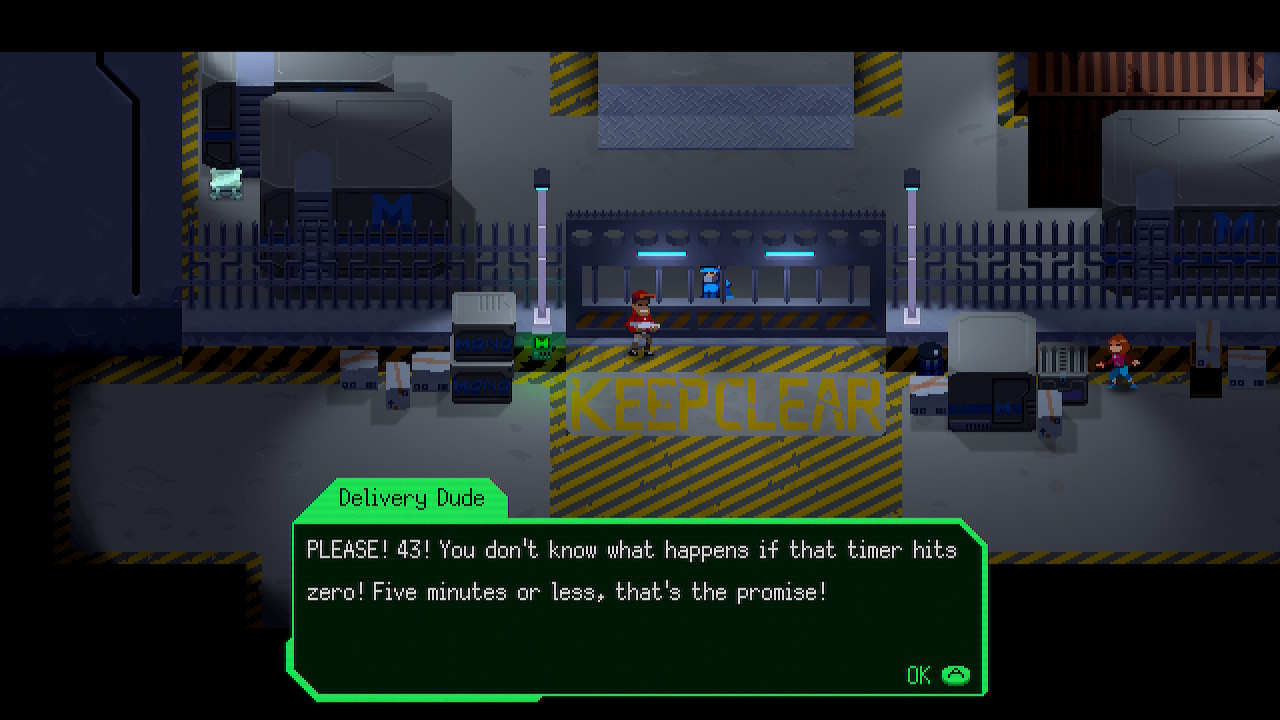 I also feel the story suffers from a very inconsistent tone. The game tries to tackle some serious subject matter, like if AI are alive and Noa’s very complicated feelings towards her father, but the game doesn’t have enough time to fit all that and tons of jokes and puns along the way naturally. Everything just feels like it comes one after the other and then oops the game’s over and we haven’t gone in depth on anything. It leaves characters feeling vague and undefined, especially your partner Ryder, and I really would have liked to get to know them based on what is there.

While the story feels like it’s rushing through beats it wants to hit, the soundtrack is full of excellent beats (a bit of a stretch but we got there). There’s some fantastic tunes here with everything from retro sounding music to more modern drum and bass, techno, or trap. It nails the cyberpunk vibe on top of being catchy and endlessly enjoyable. I’m not sure if you can buy the soundtrack anywhere, but I would definitely get a vinyl or CD if that’s any indication of its quality. This is off topic, but as a final note after finishing the game I saw an anime trailer with some great animation and voice acting, it’s a shame you can’t view it in game.

Jack Move is a fantastic and bite-sized RPG with some incredibly interesting character building. The story feels too jam packed and tonally inconsistent, but it and the characters are enjoyable for what they are. While I’m not a fan of the art style, it does what it sets out to do for the most part and is accompanied by some excellent jams.

David is the kind of person to wear his heart on his sleeve. He can find positives in anything, like this is a person who loved Star Fox Zero to death. You’ll see him playing all kinds of games: AAAs, Indies, game jam games, games of all genres, and writing about them! Here. On this website. When not writing or playing games, you can find David making music, games, or enjoying a good book. David’s favorite games include NieR: Automata, Mother 3, and Gravity Rush.
Related Articles: Indies, Jack Move
Share
Tweet
Share
Submit